What Williams EM playfields would you like reproduced next?

I don't know if anyone has ever repopped a woodrail playfield

I saw a Knock Out with a repro playfield about a year ago.

+1 on 1966 version. I grew up with that machine and it's still down in my home state in storage. Would love to bring it up here and restore it.

Licensing may be more of a challenge for the Williams stuff. Robert Fesjian is pretty easy to work with. That's a big part of why there is so much Gottlieb stuff available.

There's a reason there's little Bally/Williams EM stuff available. We all know who the reason is.

I can sort of understand the mindset of not wanting to deal with these old games when Williams 90s machines are so popular and people are lining up to pay $8000 for remakes, but it looks like there are a lot of unsatisfied customers in that venture already. Plenty are already seeking replacement playfields because of printing defects and slingshot damage among other things.

Problem is many repro parts that bear the Williams stamp are not of very good quality and sometimes don't even fit right. What I don't understand is why they would stop somebody that is trying to make small batches of repro parts for games that most in this hobby don't care about anyway. I say let the EM license go!

I don't know the details but as you may know, Pinball Rescue in Australia no longer carries the Bally Score Card Apron stickers many of us all loved so much. So, there is certainly an issue when it comes to some B/W licensing.

I don't know the details either but from what I have read is somebody else is doing those apron stickers now, and quality wise they don't compare.

Would also love a new field for my Gottlieb Volley.

If you read or participated in the threads that happened after Pinball Rescue got "Ricked" there were a LOT of dissatisfied customers out there. A lot.

A lot of it was, they're high quality parts (and high quality guys) and people want both the parts and they want to deal with guys who do things the right way.

But another part of it was, Lee and Gordon aren't in this to get rich. They're like most of us, they just want to keep the games going and if they make some small change along the way, well, good for them. Like normal, the people who put the kibosh on it don't have the ability to make what they're making, they just want to gravy train on it. Lee and Gordon told them to go pound sand, and rightly so.

We were assured then that the rollout of EM parts was on the way. As the Judge would say, "Well? We're waiting..."

We were assured then that the rollout of EM parts was on the way.

Shall we go pull that quote out of the archives?

Would also love a new field for my Gottlieb Volley.

Yeah shame on me

What sparked this thread is I never thought I would take sandpaper to a playfield. But here I am sanding away some stubborn coating on that 1948 Speed Way. Now I know this one doesn't stand a chance of a repro, but I know there are others that do.

How's it look so far?

I just can't let this one die. 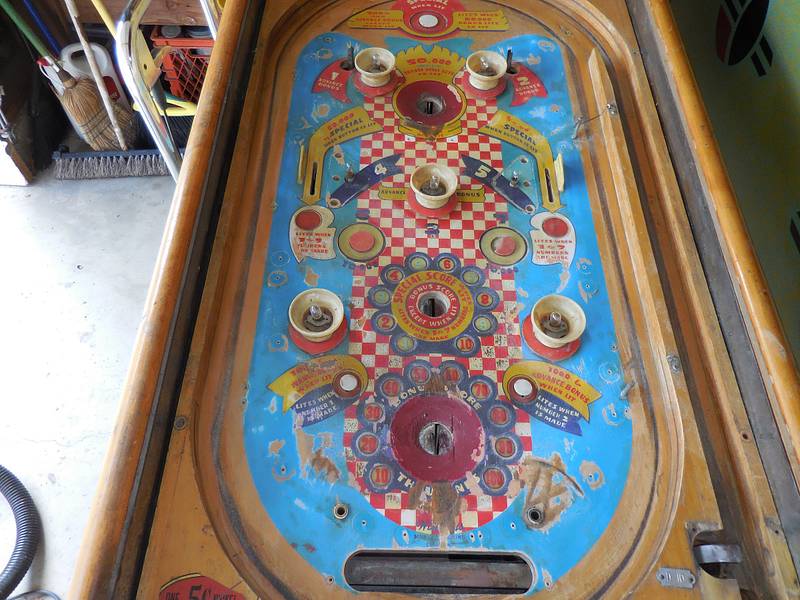 Melamine pads are an abrasive too. Might go down a bit slower than using sand paper?

Hope you have a steady hand for touch ups! That's certainly more than I would attempt. I commend you for even being willing to try.

I'm down as far as I want to go. It would be nice to have it restored but it may be too far gone. We just want to play it! I'm no artist but I know someone that is. He just did some work on my Buccaneer and it looks like it turned out pretty nice from the pics. I'm going to ask his opinion on this before i go any further. I may just clean it, wax it, put it back together and stick it in a corner so we can play it. They can't all be perfect. 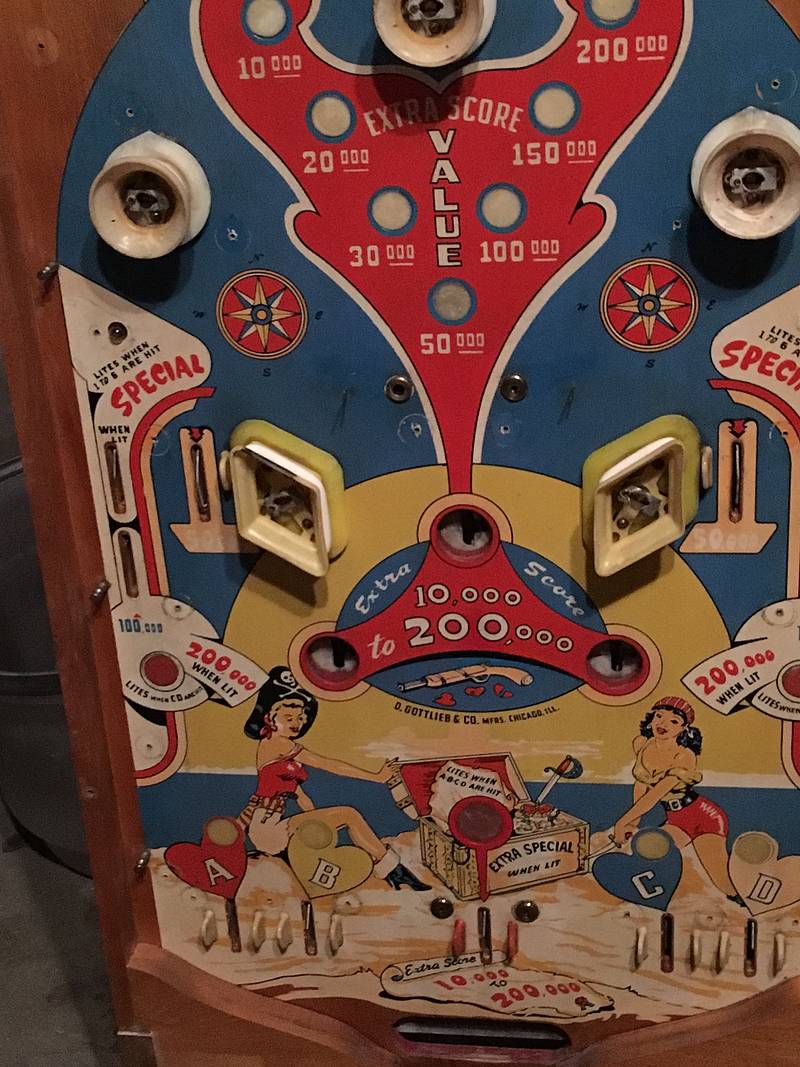 It was the area below the center kickout hole that was blown out. Most of that pistol wasn't even there.

after Pinball Rescue got "Ricked"

Outstanding line. I will use it.

knock out rerun is being done now.
world champ I never knew it was repro'ed . maybe another unauthorized run like the mermaid

Is Bally also a possibility? Would love to find a Bally Sea Ray

I think the best bet is to find a Sea Ray with a nice original playfield.

I talked to Wade Krause a few weeks back about doing a Playfield for a 1965 Williams Heat Wave and/or 1962 King Pin or any of the Reverse Wedgeheads and he was not opposed to it as he knows they are good games and most worthy of a reproduction. He would have to work out another deal with that "Fine Fellow" who has the Bally/Williams rights but that is not a deal killer. Wade is just real busy with side projects and Gottlieb Playfields and it may be years before he could even think about getting one going. He already has a 9-5 job and only does pinball on the side so that's why he can only finish a couple Playfields a year. If pinball payed well I'm sure he would switch to full time with it as he loves being an artist first.

The solution though is simple, we just need to make a bunch of Wade clones to increase production of EM Playfields.

Wade did the World Champ's.

It would be nice if another artist stepped up just to do the Bally/Williams EM games but currently there are none so don't hold your breath.

It would be nice if another artist stepped up just to do the Bally/Williams EM games but currently there are none so don't hold your breath.

I wouldnt be surprised if a scanner / printer would be made to make signs and other items and as a benefit someone would figure a way to make playfields in the near future , heck " 3D" printers can make guns... 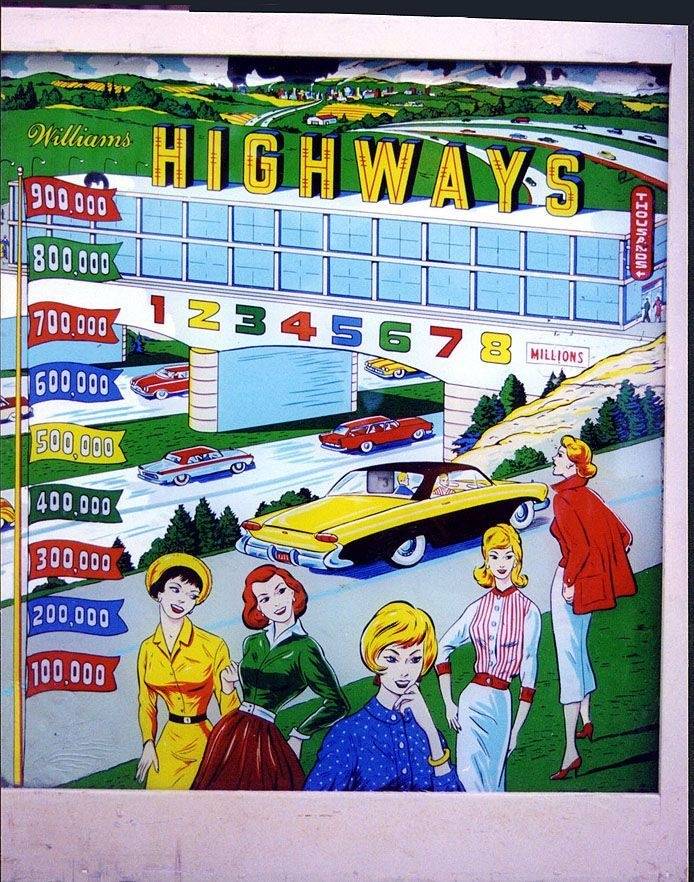 who's highway? our buddy?

If that backglass were themed to todays time it would be a police car pulling up and arresting those women as prostitutes.

who's highway? our buddy?

I pulled that pic off IPDB. Finding one of those would be a challenge indeed. Nobody either one of us knows owns one and it says only 600 were made. So why do we never see at least one come up for sale?

I take it back. It looks like pinwiztom owns a Highways. Along with two other pinsiders.