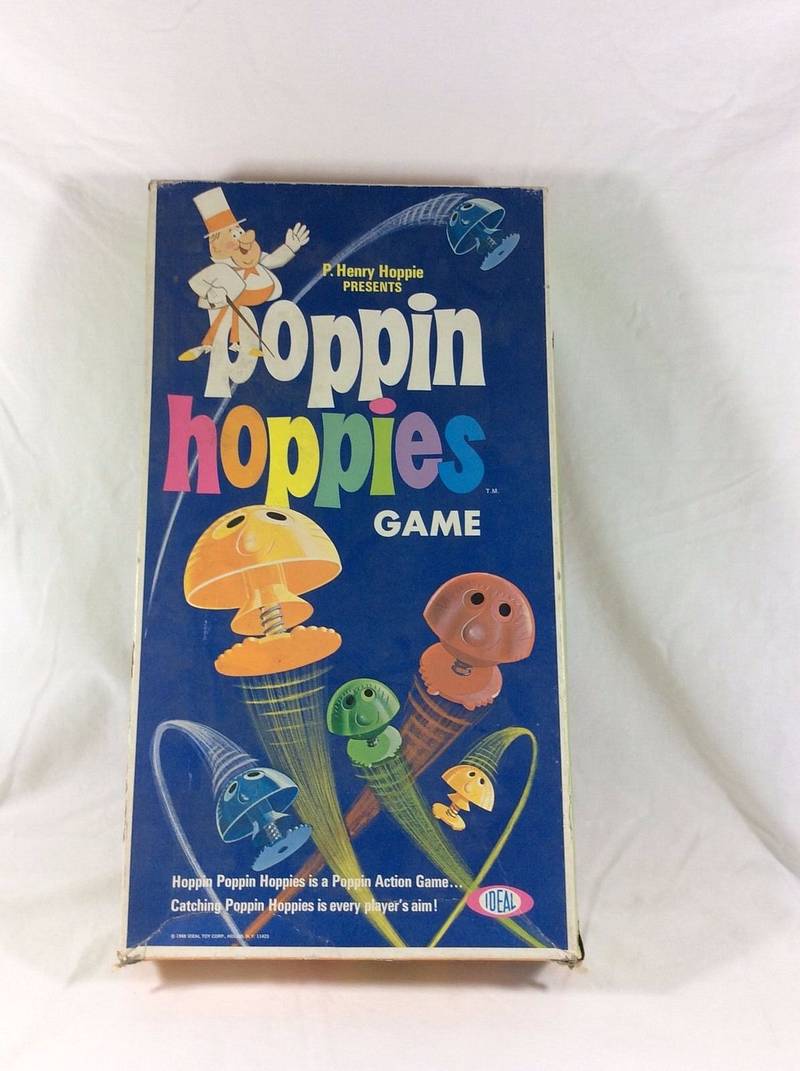 8 pages and I can't believe that no one's posted poppin hoppies. these were frickin' awesome until my brother and I got our butts spanked something fierce for taking the tops off and seeing how many we could get to launch and stick into the drop ceiling panels.

god, we were little hellions

my cousin had one of these as well. we could never get the monsters back into "perfect" brick square form, but a cool toy nonetheless

I remember having some monster maker toy as well where you had a motorized metal robot-type frame, but you "cooked" this green liquid rubber substance in these small metal forms into "skin" parts and that attached made a frankenstein-like creature. it had crazy orange fur for hair. man, I wish I could find a picture of that. 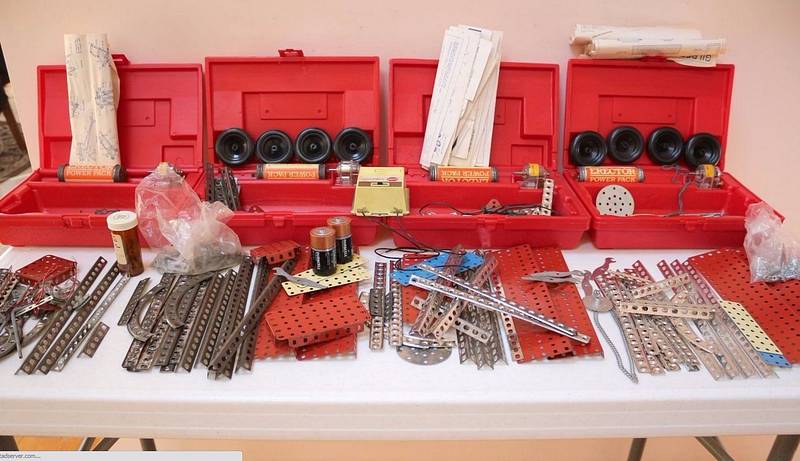 I cut open many golf balls as a kid. The ones I saw in the seventies had some rubber-band-sh kind of stuff.
Now that I think about it... I cut open just about everything
No liquid.
faz

you're not old enough then

inside the rubber bands, some balls had a rubber ball. some of those rubber balls were solid, others contained a liquid (not quite sure exactly what it was)

as kids we would cut the plastic "cover" off of a golf ball, rub one side of the exposed rubber bands on the concrete to cut through some of them, then throw the ball to watch it bounce and shoot off in various directions as the rubber bands unwound. good times

wow kim, you must have come from a pretty rich family if they bought you not one, but two putt-putt golf courses!

I was raised by wealthy carnival people. ... - OK, I lied about the wealthy part.

yeah, you kind of looked like you had a bit of "carney" in you

btw, have I ever introduced you to my good friend scott freeman?

the [thing] next to the guy's hand is a "top" (it's upside down). it's positioned at the end of the playfield (in the center) with a string wound around the narrow section. you pull the string quickly, causing the top to spin and move through the maze. the goal is for the "top" to knock down as many of the pins before it loses momentum and falls over

And so the journey begins.
Does it sound okay to semi document it here considering this thread was the inspiration?

is that a YZ80? my brother used to restore Honda SL70's

yeah, I loved mine as well. had to remove that elevated rear tail light assembly after one too many nut-wrenching incidents of the bike flying out from under me while climbing hills

Please don't. The idea of men thinking of me makes me feel very uncomfortable...

so, it's not ok that I'm thinking about you this very minute?

I'm really surprised to see that no company has taken up the mantle to produce toys today which are the same quality as those that we spent hundreds of hours with nearly 40+ years ago.

a recent walk-through the toy section of target left me feeling sorry for today's kids with their sh!tty, nearly in-animate action figures and things that vaguely resembled the characters/actors of their movie tie-in counterparts. most of the super hero merchandise is obviously a quick cash grab. it's amazing that those 3-3/4" star wars and g.i. joe figures from the late 70's/early 80's were not only better quality, but had more points of articulation (g.i.joe) than most of today's toys

and yeah, while many of the toys that we were [allowed] to play with wouldn't pass today's safety standards, then again maybe that's because we were smart enough to be a bit more careful (or lucky

hasbro and mattel should be ashamed of 90+% of the merchandise that they tie their names to today. LEGO is just about the only company (albeit expensive) that hasn't skimped out and dumbed down their product lines

what on god's green earth is this?!? (NSFA) linked because this truly is [not safe for anyone!]
ebay.com link: Figures Toy Company Dukes Of Hazzard 8 Retro Action Figure Daisy Duke Bikini

and seriously, people purchased the other 4 of these that this seller was offering?

ok, this is one for all us old folks in the midwest. does anyone remember "shagging"?

how we didn't die doing that remains a mystery

I'm currently restoring a 1971 honda SL70 from the ground up. my brother has built at least 8 or 10 of these in the past (his is the red one
it's same bike that I owned back in the late 70s (and that my father and his neighbor purchased brand new back in '71 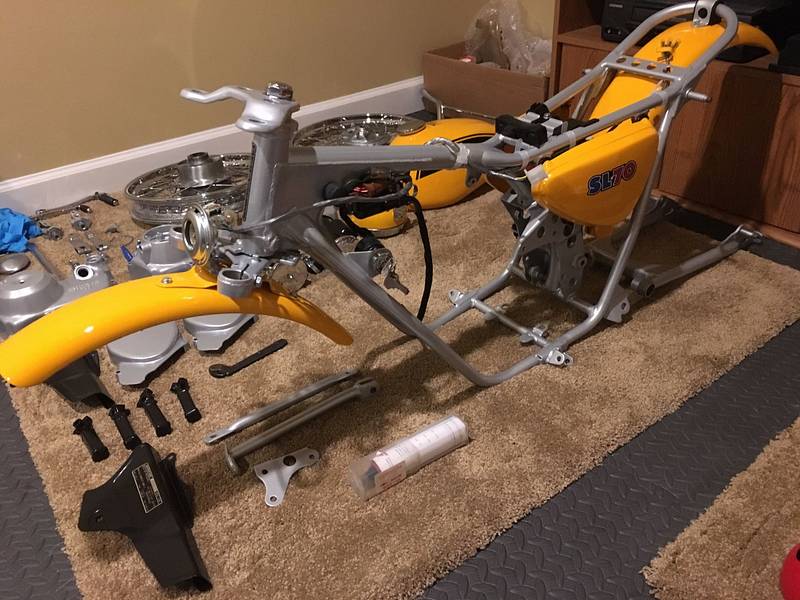 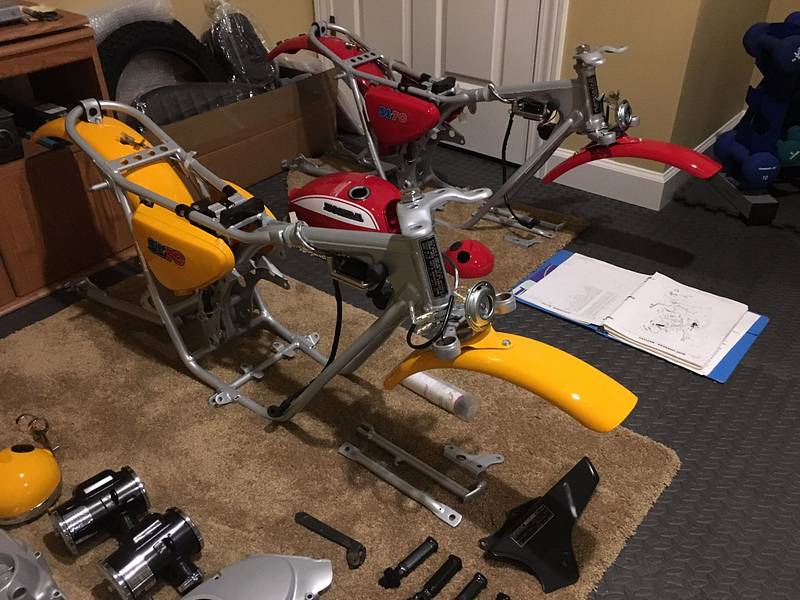 thanks. I made some more progress this weekend (handlebars, front forks, rear suspension/rear brake pedal and gas tank all installed now 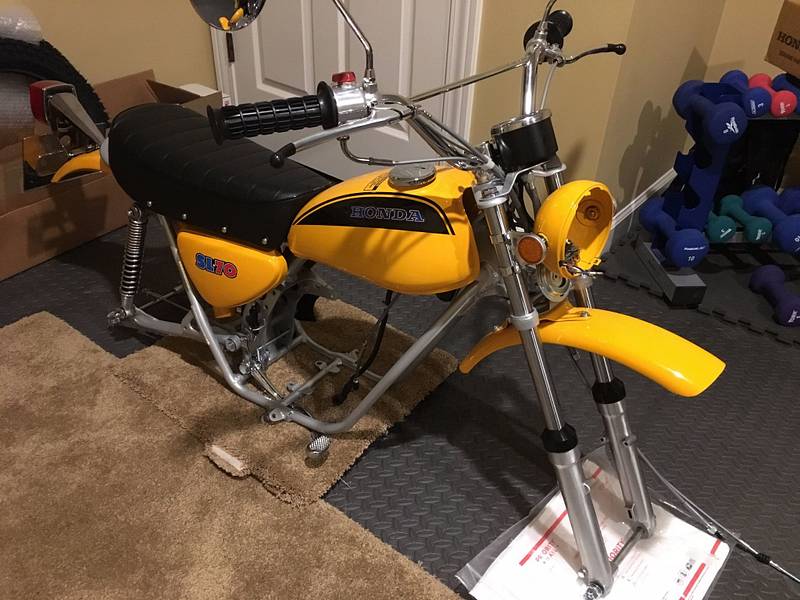 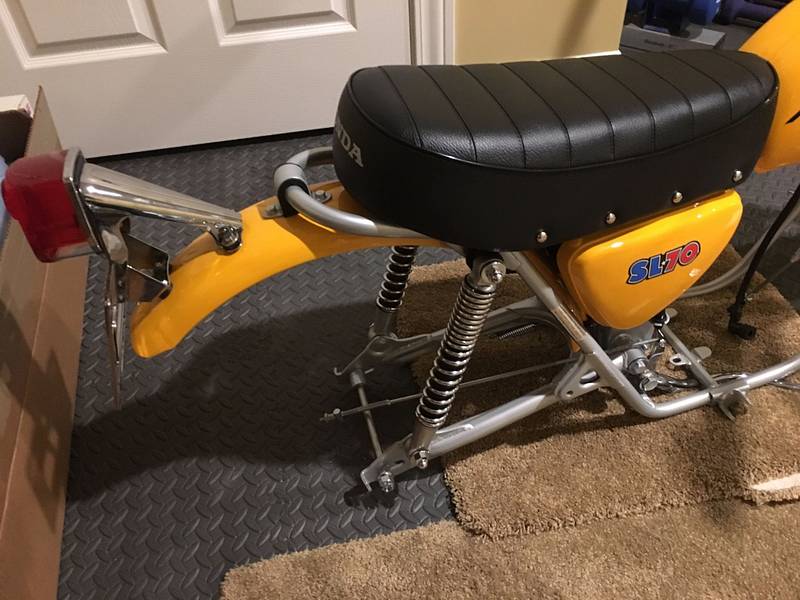 finally finished assembly on restoring my childhood (well, teenage childhood) motorcycle this past week. still have to fire her up and adjust things like the brakes, clutch and idle, but the assembly is now complete 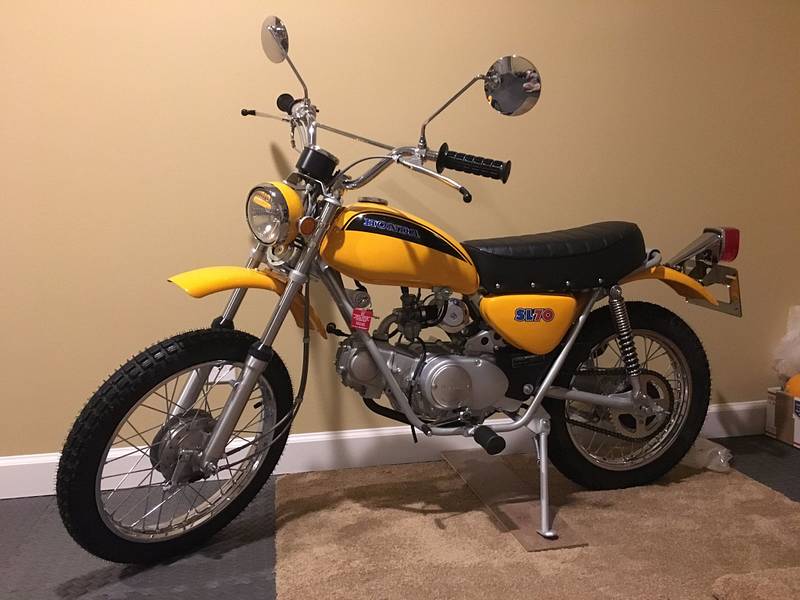 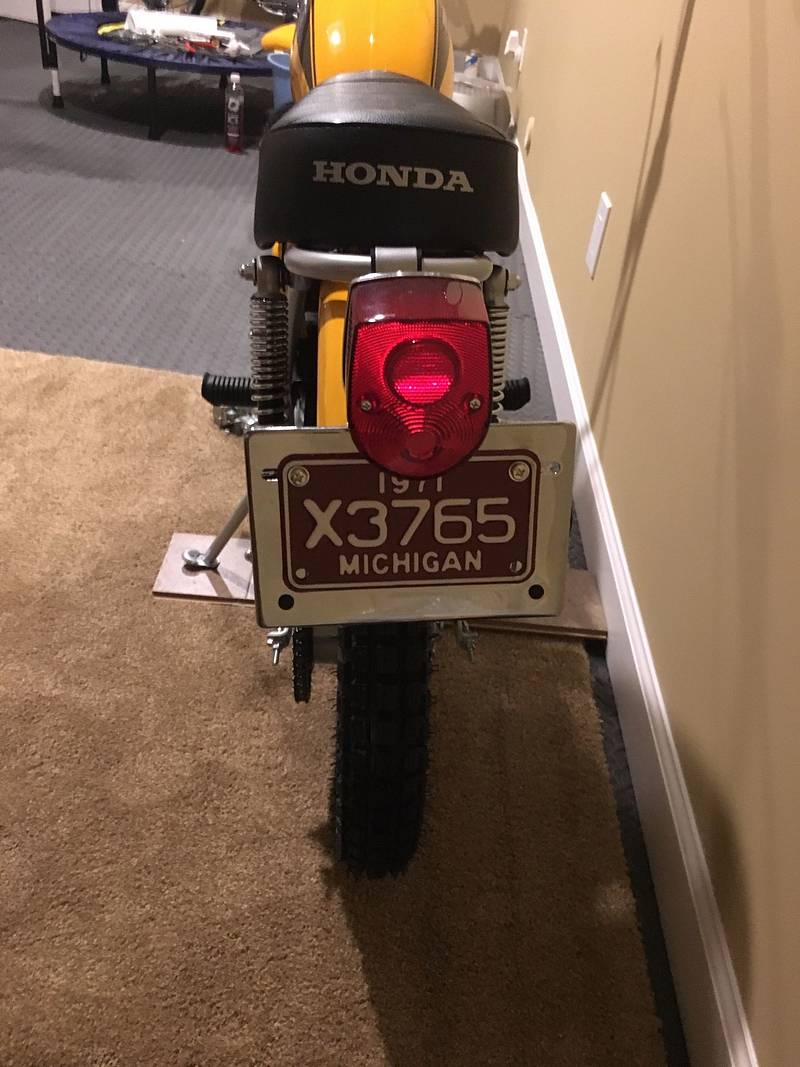 the red one is the one my brother just finished restoring (I couldn't have done this without his help). for this one, he put in an auto-clutch so that he can take his dog with him on rides 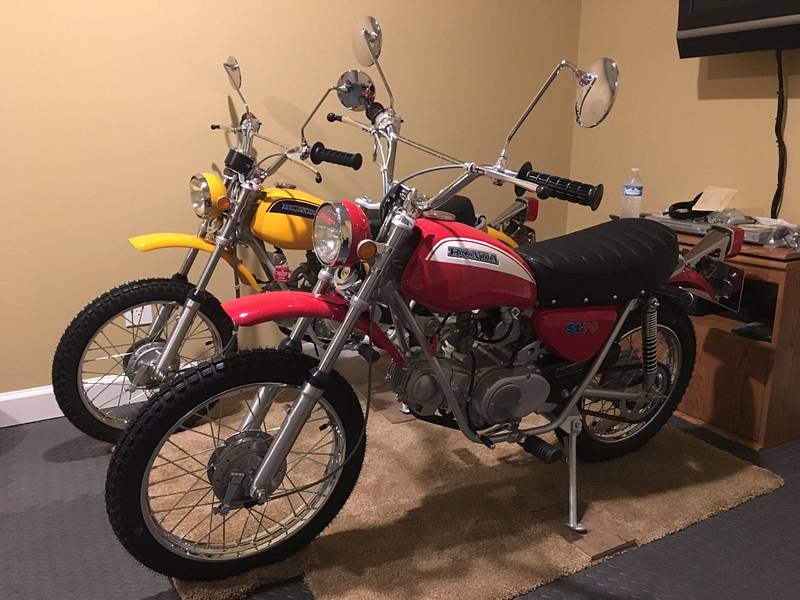 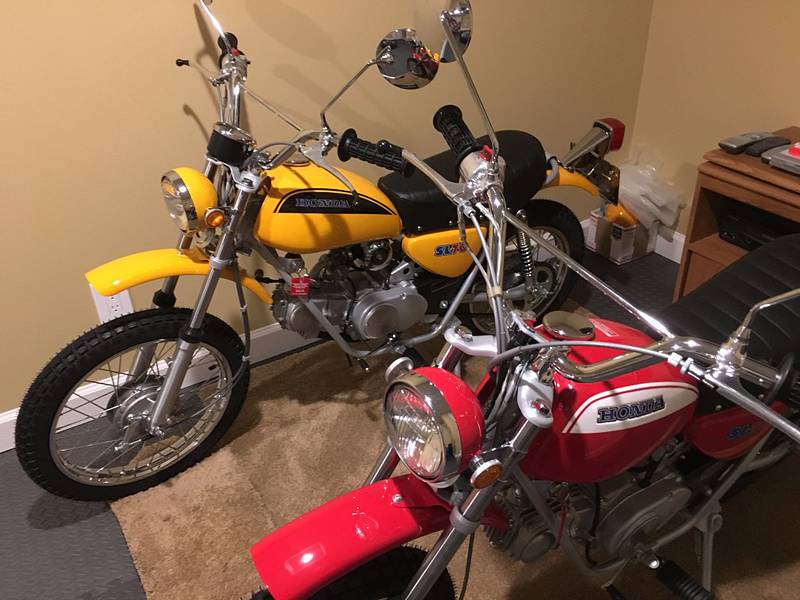 I used to enjoy cap guns

tell the truth. you used to love sniffing the gun powder from cap guns

That ditz Barbie won't stop staring at the camera....ruining the entire take!

those, a sand box and a warm summer day equaled many, many day's worth of fun

My neighbor had one of these when I was a kid. I wasn't allowed to ride it.
Picked one up a few years ago. The seller said "your kid is going to love it"....I said " I don't have a kid. lol"
So, I ride this around the neighborhood. The adults think I'm a dork and the kids think I'm cool.[quoted image]

check out my past posts for my honda SL70 restoration
https://pinside.com/pinball/forum/topic/what-were-your-favorite-childhood-toys/page/24#post-3808076

my dad still has one of those. my brother's dog loves to chase and make off with the golf balls when he's over there

Would Stellar Track only play exclusively on the Sears 2600?

no, the sears model and atari's model were identical (hardware-wise). they only differed in physical appearance. the partnership between atari and sears robuck merely allowed atari to extend its distribution in the late 1970s/early 1980s

I prefer the original set that they put out a few year prior
https://www.sideshow.com/collectibles/marvel-rocket-and-groot-hot-toys-9022391

the limited edition han and chewie set that I purchased a few years ago was amazing (to be honest, all of the hot toys releases are limited)
https://www.sideshow.com/collectibles/star-wars-han-solo-and-chewbacca-hot-toys-902761

hot toys are incredibly detailed. and if you think the price of chewy is a bit on the high side, wait until you see this!
https://www.sideshow.com/collectibles/marvel-hulkbuster-deluxe-version-hot-toys-903803

the hulkbuster weighs in at approximately 20 lbs and will accommodate their 1:6 scale iron man mark XVIII figure
https://www.sideshow.com/collectibles/marvel-iron-man-mark-xliii-hot-toys-904123

I have a quick story on the flying disc....We were vacationing at a small hotel on Casey Key at the North end.
It is the only Hotel among exclusive homes, Stephen King, owning the largest estate at the end.
I had brought the ring to play with my 5 year old daughter, and lost it in the ocean.
Some 7 years later, we found it in the surf, covered with barnacles and growth....I thought that was pretty cool.

old games with their carbon '9 lives' ray-o-vac batteries were the best. those things never leaked like the alkaline batteries of today 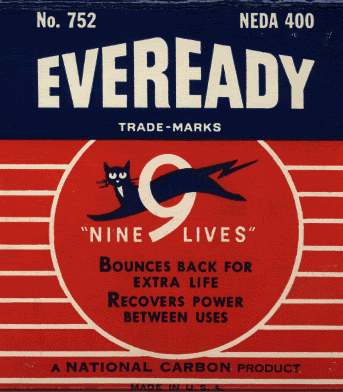 our parents hated my brother and I for this toy. we took the heads off them and stretched out the springs so that they would fly higher and get stuck in the drop ceiling tiles

Yes, we called it Skitching, not sure how that term was derived.

we called it shagging. good times. when cars had metal bumpers that you could grab hold of and hang on for dear life in subdivisions

Many times, A group of us went to a RUSH concert at Joe Louis Area, after a trek thru to the roof parking on Cobo hall we came upon the down escalato, we got Steve to go first, he ran track several other followed, then I gave it a go and nearly ran out of steam3-4 steps from the top. Finally made it! It al happenedl because of BEER and left handed cigarettes. BTW it was a long escalator going up the equivalant of 2 floors.

signals tour? if so, that was one of the first concerts at the joe when it opened. some idiot stole my tour book and wrif sticker as we were leaving. fortunately, a buddy was going on the 2nd night and grabbed me another.

I wanted tv dinners so bad , until i had one!

illegal use of the scooby doo mansion on the box art?

we had those driving simulators. they were quite boring so most of us didn't drive and just let the car bounce from side to side like the old timey cars at the amusement parks that drove around a track with a railroad tie in the middle.

when we actually got to driving a [real] car, we had a girl that was so bad that it was the first time that our instructor had to use the brake on his side in his 20+ year career as a driving instructor (she was so bad that the rest of us covered our eyes instead of watching her attempt to drive). additionally, she made him so nervous that he literally whittled one of those long, plastic dairy-queen spoons to a nub with his teeth every time she got behind the wheel.

it was an animated short (sort of like the schoolhouse rock psa's) where replies like "not me", "I don't know" (and one other phrase) were personified