What was your first machine?

The Shadow. Still have it, and it would probably be the last to go.

TMNT. Being restored as we speak

Game Plan Sharpshooter about a year ago. Still have it, plus 2 other pins joined it in November! 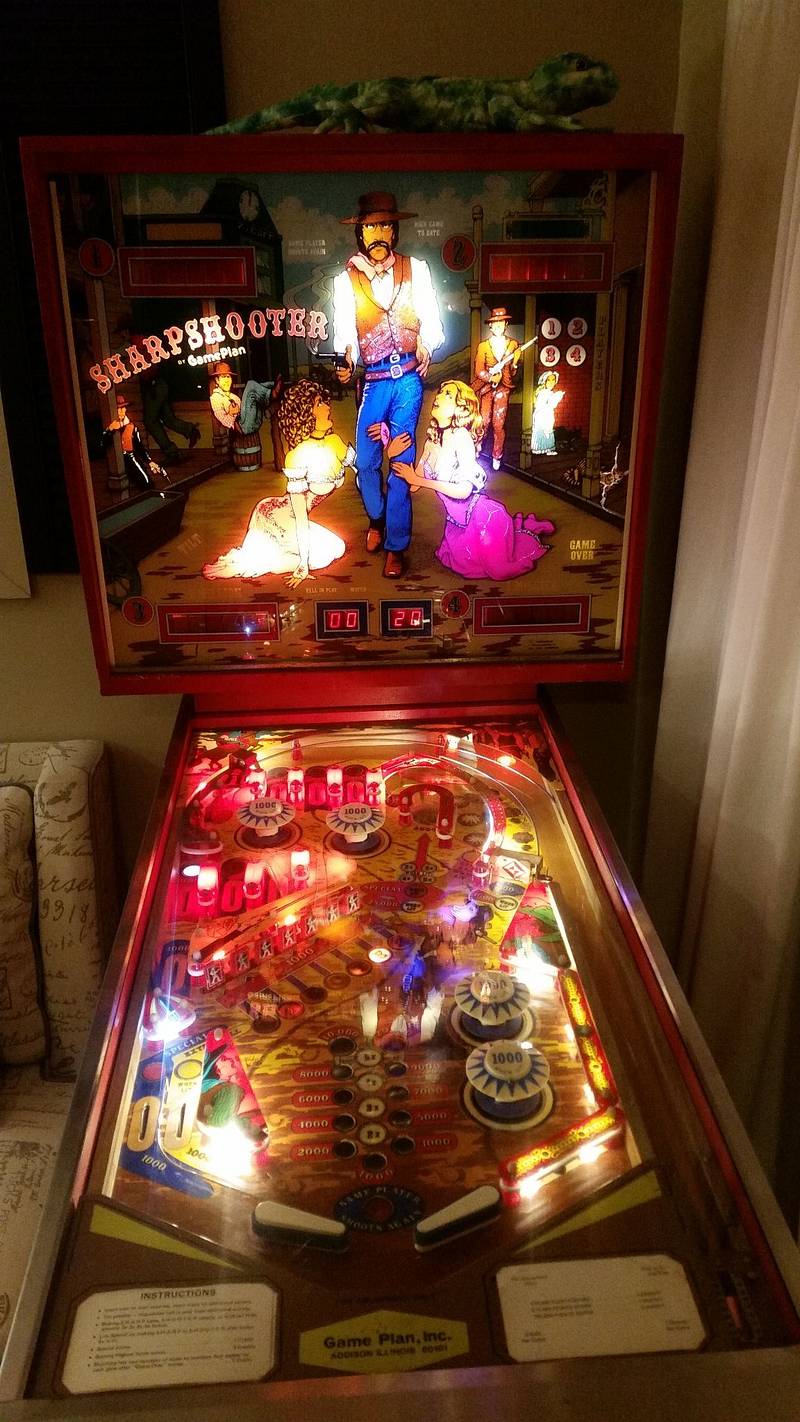 -Rob
-visit http:/www.kahr.us to get my daughterboard that helps fix WPC pinball resets or for my Pinball 2000 H+V video sync combiner kit

Jukebox. I kind of miss it.

Corvette 15 years ago. Have always had a Vette to drive since my 20's, about 25 or more years. Still love the loops and combo shots for sure. No plans to sell as long as I don't need the money. No surprise though as I don't sell many...

My first game was dipsy doodle. Sold it to a friend over a year ago. Probably getting it back sometime this year. Can’t wait!!

1995 An account of mine wanted a pinball machine . I had no Interest in pinball . I said no. The location owner said that he would call a competitor . I said I would buy a pinball machine to put in the Strip Club in addition to my Juke Box and three Merit counter top touch screens . I went to the Colorado Game Exchange that was the name of GEX back then . I talked to Rich the owner. His son JJ was just a little kid . I had no Idea what to buy . I played Corvette and love it . So did the Location owner . I have been collecting pinball ever since
First : Corvette

Stern Star Trek. Loved it, played the heck out of it...

1974 Gottlieb Free Fall, wedgehead e-m, add-a-ball version of Sky Jump.
I was the high bidder on an Ebay auction. Then a pinball roadtrip to go pick it up.
Nothing ever went wrong with it for the several years that I owned it after I first shopped it out, replaced rubber rings and a bunch of bulbs.

Motordome bought in 1987 for $500. Carted in a Ford Pinto from San Jose down to college at San Luis Obispo ! Yes a Pinto. Bought it because it had ramps and multiple flippers and a million shot and it was $500. On paper an awesome game. In real life an absolute waste of parts and an abomination to pinball. Got rid of it 2 years later and never bought another machine again for 20 years.

Embryon, bought in 2010 not working for $300. Fixed with help from Clay's guide. First board work, rebuilt the acid damaged MPU, replaced bad rectifier bridge. Still have it, still my favorite..

Wwf royal rumble, still have it. Doubt I will ever sell it, still love it!!!

Millionaire, was given to me from a doctor because it didn’t turn on and he was tired of paying for it to be serviced. Turned out to be just the main fuse. That was the start of my pinball sickness, but I just sold the game.

Transported it in the back of my friends truck with the legs on. It was only a 2 mile trip......flew out of the truck on the final turn.....priceless!
Never did that again!

BSD, and it will be my last if I ever start to sell off machines (though my previous main hobby lasted 2 decades [MtG], so I doubt it will be going anywhere for a long time). At this point I've had the chance to play the vast majority of non-EMs (thanks to those that bring their games to shows

) and while there are many great games, nothing has the whole package for me like BSD.

However, I also purchased Freddy at the same show (after BSD), so they both came home at the same time. Freddy is gone (awesome for the short term in an arcade, but poor rules for home, so it went as soon as space became an issue...then I figured out how to cram a couple more in another room

DE Star Wars for me. Needed a lot of work when I got it but well worth the effort and I made some new pinball friends while fixing it. Still have it now too.

Fish Tales back in 2002 off Barry in NJ off EBay - live and learn.
Came to me not working and no such thing as IPDB (for a manual) or Pinside (no idea what RGB was back then) to help me figure out. Spent a crap load of money on some non pinball tech to try and fix it in Okalahoma (Fort Sill/Lawton) to no avail.
Got orders to Hawaii and shipped it there still not working and sat as a paperweight till I finally sold it. I hope it is in good hands and on island somewhere.
Still want to get my hands on another one some day

Genie. Absolutely trashed. Learned how to restore. Brother-in-law cleared the play field. In the end looked very fine. Sold as I was graduating to the DMD era.

Diner, traded it out for a NIB Tron pro when it started having issues. Now, I could fix it but back then I was too intimidated as I had no electronics repair experience.

I traded it and quickly bought another.

Sega Lost world Jurassic Park my parents bought it for me not knowing what to buy me for Christmas and that is how I got into Pinball. I also still have the game.

Whirlwind was my first. Players machine that was in decent condition. Sold it and immediately regretted doing that. I ended up finding another and restored it.

Feel the Power of the Wind! 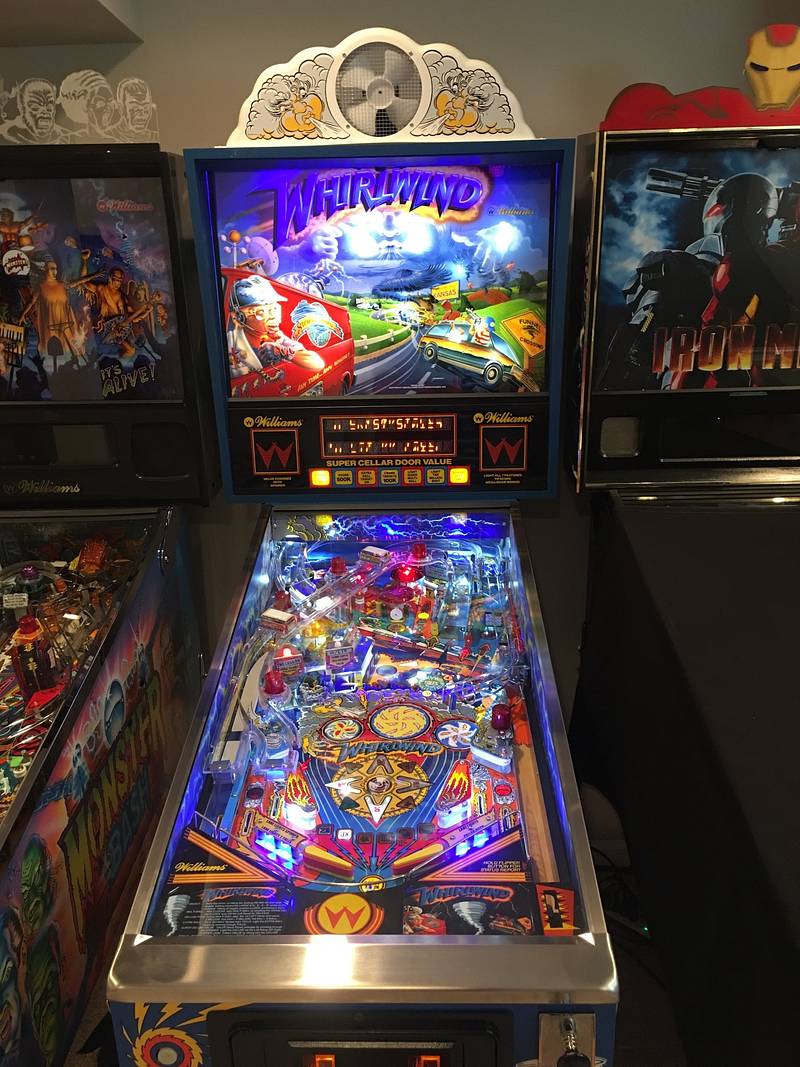 Still here and don't ever see it leaving.

Space Station, still own it. And technically its the wifes as i bought it for her for Christmas 5 yrs ago! She says its not going anywhere!!!!

DW. Still have it and likely it will only leave after I go out feet first.

Not that I'm some kind of PinGod now, but I was such a newb when I bought that game. I only knew in theory how to turn the thing on, much less lift a playfield. And, of course, one was going to be enough... 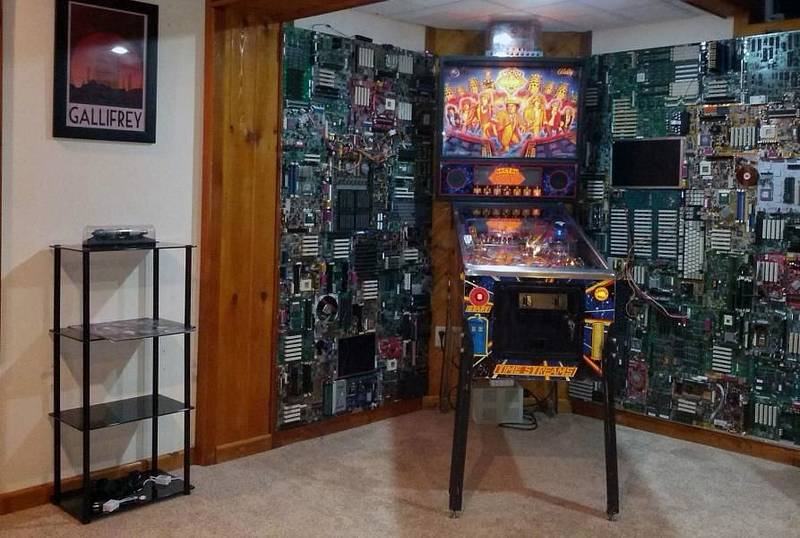 There can be only one!

I've only been in the ownership club for about a month and a half, but my first (and only) game is High Speed.

Tales of the Arabian Nights shortly after it was released. I purchased it from a distributor in the DC area and am pretty sure I am the first owner even though it was not NIB. It had no wear and the goodie bag and manual were with it as if it were new. It had lockbar brackets on it, but no lockbar wear. I still have it over 20 years later and it looks like it did when I got it.

DW. Still have it and likely it will only leave after I go out feet first.
Not that I'm some kind of PinGod now, but I was such a newb when I bought that game. I only knew in theory how to turn the thing on, much less lift a playfield. And, of course, one was going to be enough...

My 1st was Paragon back in summer of 1985. I remember opening the elevator door and her staring right back at me clearly like it was yesterday. I had always loved pinball playing at bowling alleys, gas stations or stationary stores but the sickness started that day! This is an old pic, she's still in the lineup and EBD has left. My friends think I'm crazy but she's my 1st love 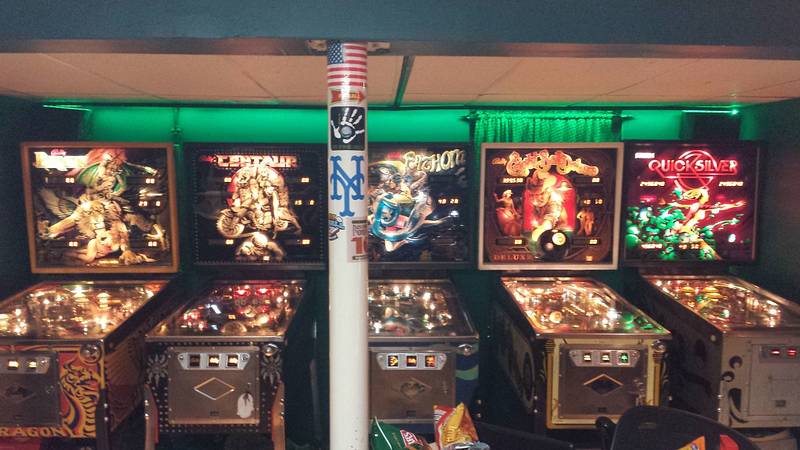 Mine was a 1995 Gottlieb Strikes ‘n Spares

Who Dunnit? Bought at an auction for $1350 back in about 2006. I knew nothing about pinball machines, so thankfully for me it worked.