What EM game surprised you most?

Sonic Faces- Aside from having amazing artwork its also a pretty fun layout. I always loved the backglass and turned one down about 15 years ago. Luckily I found one for sale locally about 3 years ago and bought it just for the colorful bg and pf. I cleaned it and tuned it up and it is one of my more popular ems in my collection.

I had some friends over last year and had 2 tell me how much they enjoyed wms Travel Time. I have always thought it was the best timed pinball made and very different from your traditional 3 or 5 ball em games from that era. I have had a couple games that have lasted over an hour .

There are lots of great em games out there and these are a couple of my all time favorites.

love my 1970's gottlieb em's but this one really surprised me..and will never let her go

An EM game that caught me off guard, on how fun it is, is Williams Super Star. The artwork on the game is just blah. But the gameplay is great. It's convertible between Replay, Novelty and AAB. Mine is set on Novelty so AAB for advancing bonus and completing rollovers but only a replay for surpassing scores.

I've had thee parties and had a rollover tournament on this machine and only 1 person was able to roll it over! It's set up tough even though there are a center up post and two outlane up posts; so it's possible to have all drains blocked. 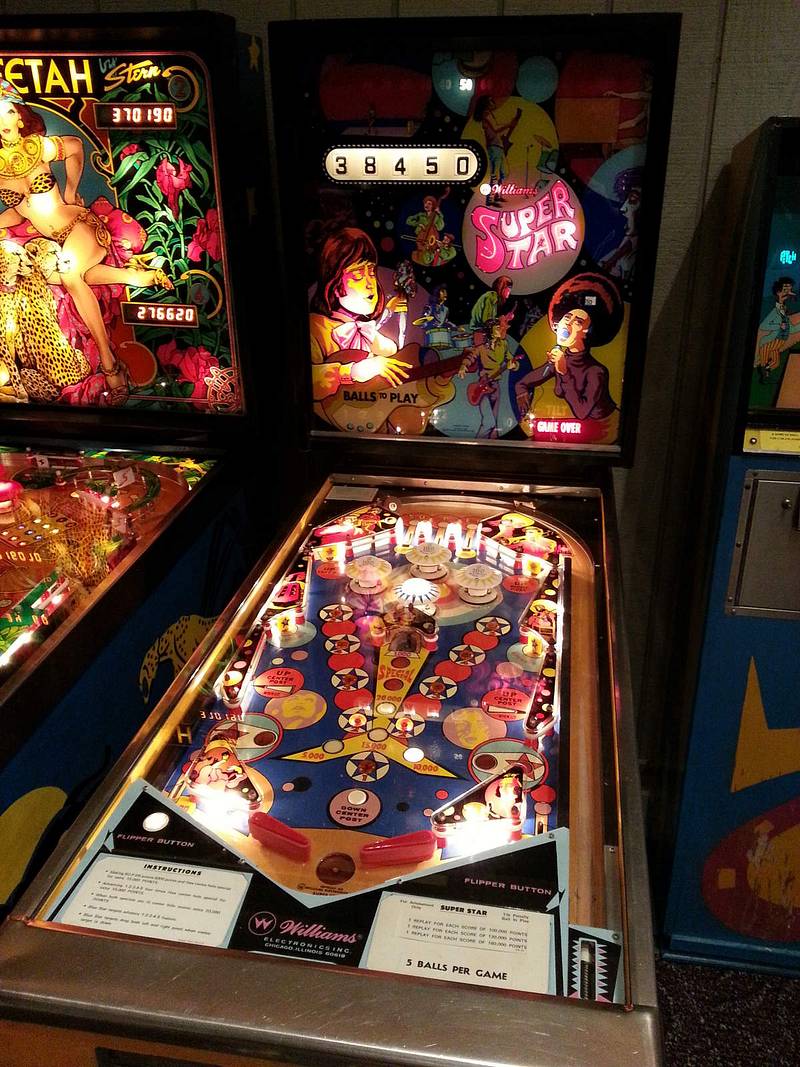 An EM game that caught me off guard, on how fun it is, is Williams Super Star. The artwork on the game is just blah. But the gameplay is great. It's convertible between Replay, Novelty and AAB. Mine is set on Novelty so AAB for advancing bonus and completing rollovers but only a replay for surpassing scores.
I've had thee parties and had a rollover tournament on this machine and only 1 person was able to roll it over! It's set up tough even though there are a center up post and two outlane up posts; so it's possible to have all drains blocked.

totally agree, super star is intense to play..to work up the bonus without getting it into the eject hole..building up to double special..best played as an aab.

really miss mine an regret selling her

5 years later... BUMP...
This thread is poignant for where I'm at now, so I figured I would bump it

As someone who grew up in the later solid state/early DMD era, sure I have found myself enjoying newer titles, but i've noticed both my interest and collection has been slowly inching back towards much older games. It seems as though many of the older games, while they appear simple, are extraordinarily challenging and addictive. As a result, my personal collection has also been shifting towards the older era of games...beyond solid states and deeper into EMs. As a matter of fact, I'm about to make a deal on my first woodrail later today, which I'm really stoked about (now I need to get better at addressing issues of these older games, schematics, etc. A challenge that I have accepted and will work on for years to come)

So, as the OP of this thread from 5 years ago brought up, which older games have caught you off guard or surprised you with their surprisingly inventive/addictive gameplay...or maybe changed your view in a positive way as it relates to older EM era of games?

For me, while I have been more recently enjoying the art, pace and gameplay of EM games from the '70s, I personally never thought I would take any interest in the woodrails (at all). They seemed waaay to slow and for whatever reason I had a real "attitude" about the smaller flippers, etc. However, recently, a woodrail that caught my eye. A 1958 Gottlieb Gondolier. For me personally, I was blown away with it! I mean, seriously surprised! Four flippers (two at the bottom, two at the top), four stand ups, two gobble holes, four gates up top that change the values of four pop bumpers, four rollover switches, three rollover targets a spinning light show in the middle that rotates changing the value of your shots, not to mention really neat artwork by Roy Parker. Sure, in this upcoming deal I'm going to be knocking on the door of a professional to help me restore the backglass (which in this case is on the good side of terrible), but I'm going to really enjoy this game in my personal collection and I'm thrilled that it's coming my way.

I just never thought I would own a woodrail until meeting this game.... So it got me thinking, as above...which older game (that you never thought that you would enjoy at all) just surprised you and changed your viewpoint?

Out of Sight surprised me BIG TIME. I bought it off a whim and it's a keeper!

Dealers choice. Awesome em with lots to shoot at. Fast playing. Known as a less expensive game but ended up being one of my favorites.

The game that surprised me the most was Hot Line, I don't particularly like the artwork,the playfield doesn't look anything special.
They used to come up for sale regularly in the UK fairly cheaply and I dismissed it, then I played one and was hooked immediately.
I bought one soon after and rebuilt it, what a clever, addictive game.

The game that surprised me the most was Hot Line, , what a clever, addictive game.

This makes up for its humble appearance: