15 key posts have been marked in this topic, showing the first 10 items.

Post #1 Vid is a whiz at pinball repair, and this thread is full of times on Flipper optimization. The first post has a table of contents for the thread, but now with Keyposts pinside feature, I'm going through marking key posts. Posted by vid1900 (9 years ago)

Post #41 How to use Digital multi Meter (DMM) and logic probes to test circuits and electronic components. Posted by terryb (9 years ago)

Show all 15 key posts in the index

You're currently viewing posts by Pinsider ajfclark.
Click here to go back to viewing the entire thread.

Generally, if your coils are still good (and are the correct ones listed in the manual) you reuse them.
They don't wear out.

Even this still worked, but I couldn't replace the brass sleeve without the whole thing disintegrating: 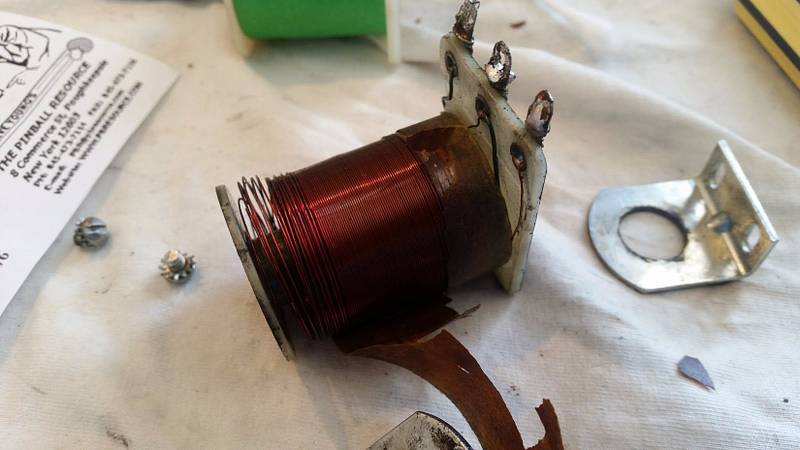 I haven't peaked under the covers on its brother, which also had a recalcitrant sleeve: 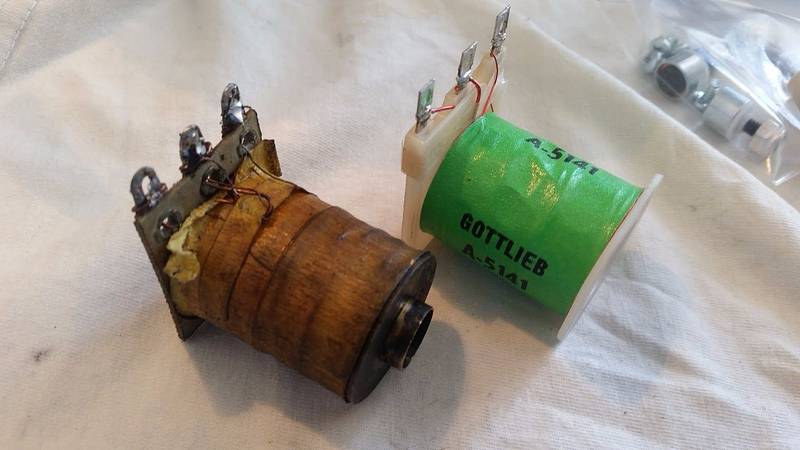 - Where should I look for the cause of the buzzing noise? What is the best way to get rid of this?

The buzz is vibration. A little is unavoidable, but the less movement you have, the less buzz you will have.

This ties in to another of your questions:

- There is some play in the coil, both laterally and longitudinally. i.e. I can rotate the coil a little bit, and I can move it a tiny bit lengthwise. Is this an “issue”? Is the solenoid assembly not being locked down tight robbing my flippers of power?

If you watch the flipper coils when you activate them while loose, they rotate - that energy could be going into the flipper plunger instead.

I've not played with a Williams EM, but I assume the setup of the coil brackets will be similar to Gottlieb? The bracket on one end of the coil has oval holes and the other has fixed holes?

I've tried just squeezing the brackets in as I tighten, but I've never had much success getting them tight - especially if they are still mounted on the playfield.

Hi everyone, basic question, do I need low voltage or high voltage EOS switches for Funhouse?

vid1900 is it safe to always assume the type of EOS switch based on where the wires go?

Old flippers use the opening of the EOS to take the power winding out of the circuit. These are high voltage switches, directly connected to the coil that are normally closed. They open when the flipper reaches its limit of travel, which switches the coil to only using the hold winding.

Newer style flippers (from around 1992?) use the MPU to control whether the flipper coil is at full power or holding. These are low voltage, normally open switches. The EOS on these closes when the flipper is at the limit of its travel, signalling to the system to decrease the power to the coil/change to the hold winding. The system will also change/decrease if the flipper button is held down but the EOS never closes, preventing the coil from burning if the switch is misaligned, missing, broken, etc.

The Pinball Magic is the latter. The manual lists SW00127, a normally open switch which should only close when the flipper is at the limit of travel. If it's closing early, the flipper will be weak because the system is prematurely cutting the power to the coil.

Secound picture is the flipper engrized

And how does that compare to the other flipper that works fine?

Other two flippers were fine. No issues.

I'd swap the coils around then and see if the problem moves with the coil or stays put.

If it moves, it's the coil.

if it stays put, it's something else.

If it disappears entirely it was the soldering, mount, alignment of the coil, etc.

Coming back to it next day, it was nice and strong. Got weak as play went on. Gonna replace coil and replace other parts if deemed necessary. Thanks!

I'd also check the resistance of the coil.

on this game since the coil has the same windings for power and hold (1 ohm) and simply gets halved when you open the EOS switch.

The model number tells you a bit about these. The primary is 19 gauge, 400 turns while the secondary is 30 gauge, 750 turns.

If you are reading 1 ohm on both the primary and the secondary, something is wrong.

You're absolutely that didn't sound right. I needed to open the EOS switch to get proper measurement across each lug. For the left flipper, I get 1.2 ohms to the center and 24.0 ohms to the left. Perfect. On the new right coil, I get 1.0 ohms center and OPEN to the left (was something stupid like 30 mega ohms). I think we found the problem. Hard to believe it's a bad coil at the factory as I haven't seen this before.
A SFL-19-400/30-750 is used in other Williams games of that era and is a perfect, slightly snappier substitute for the SFL-20-300/30-800. Pretty much identical resistance.
Owner has ordered a few spare coils. Will replace (again) and hopefully put this issue to bed.

If you're getting 1 ohm across a closed EOS, it needs cleaning, alignment or replacement. It should read as a dead short (or very close to).

It might be averaging out with the coil resistance. Can't reliably test eos resistance while it's attached to the coil

True, my bad. I do check them before I attach a new coil so I wasn't thinking how it'd work in situ.

Vid-
We could really use a Alvin G. flipper rebuild section!!!!!

Next time I work on an Ali G, I'll shoot some pics.

Did you end up making an Alvin G & Co guide? I have one that I will need to rebuild so with some guidance on the best parts to make replacements with, I could take some pictures?

4. Make the contacts really close but not *that* close

How close? Adjust them until the slingshot machine guns, then back it off a bit?

PBR lists heights for the different stops on the detailed breakdowns of the flipper rebuild kits. eg. http://www.pbresource.com/KT-WFLIP05.html

There's some other notes about flipper mechs around that era: http://www.pbresource.com/rebuildkit.html#baseplate

Having investigated this recently, either I'm measuring incorrectly or these measurements are completely wrong. I tried every measurement I could think of and none matched up.

I just went and got some calipers out and I concur. Those measurements don't make sense as written. From the back of the bracket to the tip of the coil they do line up though. eg.
A-10821: 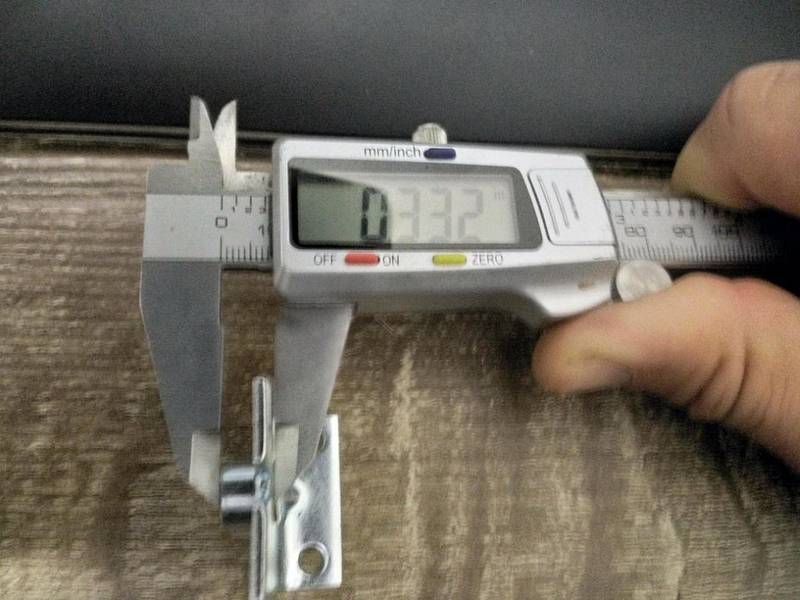 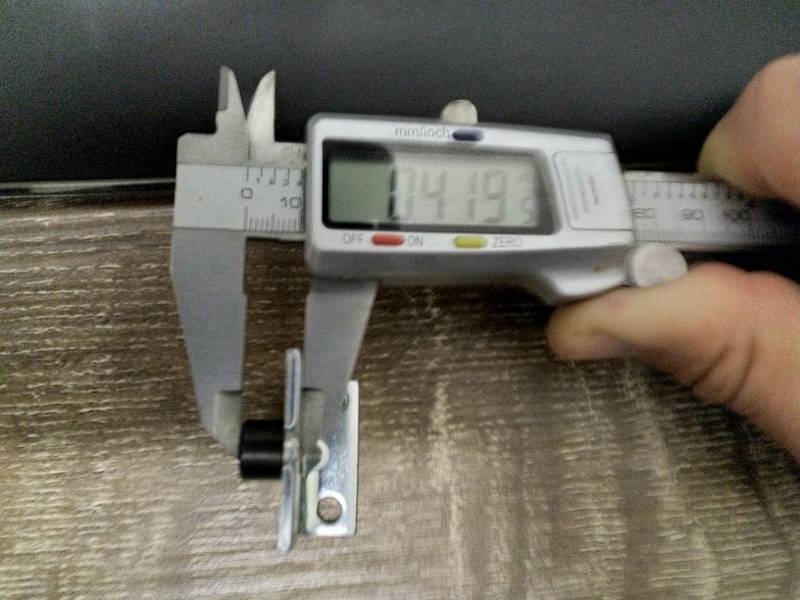 Those numbers line up with PBRs, but from the back of the bracket to the stop, not protrusion into sleeve.

For some reason I couldn't get those to work out for me, but I don't trust them anyway. No guarantee they'll always use the same method of attaching the cores.

It's very awkward TBH, and probably not that accurate as you need to get one side of the caliper completely off the riveted butt and the other on the coil stop, so it's not measuring in a direct line between two flat surfaces and any change in the bracket will change the measurement. Better than measuring directly between the coil stop face and the riveted butt though I guess and it probably is good enough to distinguish between unlabelled parts though.

Holding something flat against the coil stop and measuring between that and the bracket seems like a much more sensible idea, less prone to error, and should correlate to measuring the stop before it's fixed to the bracket, etc, etc.

Success.....!!!! I think...
It seems like everything is working -- the flipper bat is in the right position, it has good power, I can hit all of the shots. Things seem good. The only thing I noticed is that I can pull up and down on the flipper bat more than I can on the other flipper. There's always the gap under both of them from the credit card at least. I went under the playfield and played around with the mech, and found out that there's more give there - but I can't figure out a way to stop that as there's no screws to tighten or anything. I went back to my rebuild kit vs. the one I took out, and overall there's just more play there... Am I missing something obvious?
I made my mission of getting it working before my coworkers come over on Wednesday, so that's good -- and when I play, I can't feel any difference from before -- but I can't help but feel like I did something wrong (mostly because I've never done anything like this before so I had to have screwed SOMETHING up, right?)

e.g. https://pinside.com/pinball/forum/topic/vids-guide-to-upgradingrebuilding-flippers/page/43#post-4608260 has a picture of a long stop vs a short stop.

No, it's the up/down motion that has play (pulling the flipper up from the playfield).

Ah, ok. Any difference in the plastic bushing? Otherwise I'd just say loosen the crank on the loose one and slide it closer to the playfield.

VID
I am sure this has been answered before and I think I may have asked before as well, But I need to know on the EOS switch the middle lug on the coil, does that wire go to the short blade or the long blade? I have seen it both ways and was not sure if there is a right or wrong way and why. The game I am doing at present has three flippers and two are one way and the third is not. Wanted to stay consistent.
Mike

Or something else. Haha

Have I missed it? Was there ever a guide to rebuilding Alvin G flipper mechs? It's tricky to source some parts which has always stumped me. 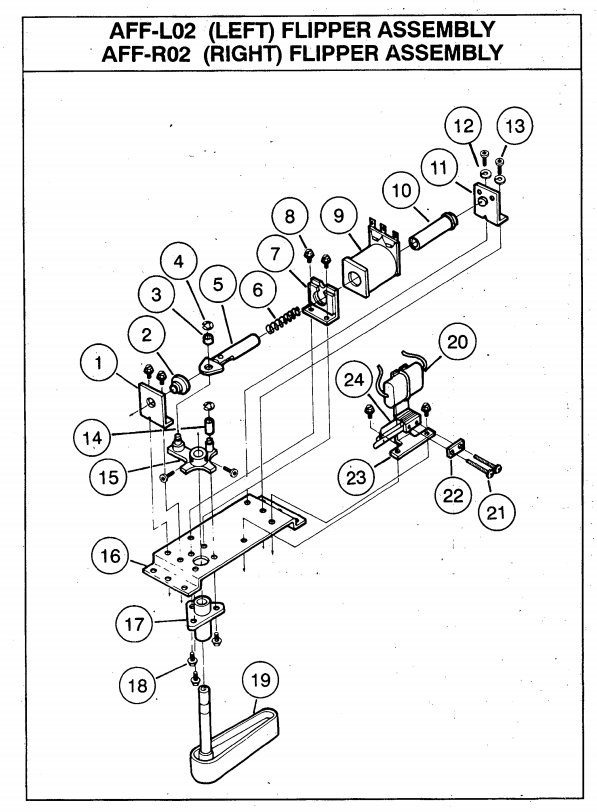 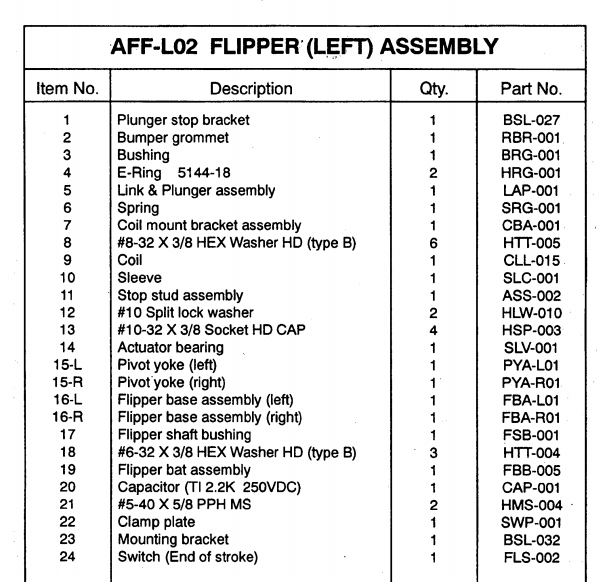 But I've never found a replacement for the bushing between the crank and the link.

Just give up and replace all of it with a williams mech?

You're currently viewing posts by Pinsider ajfclark.
Click here to go back to viewing the entire thread.