Why do this? I was unable to find the C-5161-4 unit for a 1962 World Series restore. This earlier versions with modifications and coil upgrade to a H23-870 is just as good. On review of four batting units and talking with other baseball game owners it became evident that unless they were routinely lubed bat units linkage can become worn over time and not function properly.

The early C-5161-2 more modern arrangement has a cotter pin on the shaft that allowed the bat and shaft to be fitted from the top of the playfield with a smaller hole in the playfield. This was simplified a year or so later to the final two piece arrangement (not changed since) and although not really necessary the cotter pin was nice engineering in my view.

The assembly shaft may require on the C-5161, C-5161-1 and C-5161-2 batter units that the assembly frame collar that goes through the playfield be drilled out to a 3/8" diameter hole to fit the slugfest shaft. 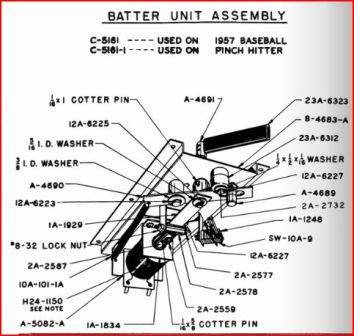 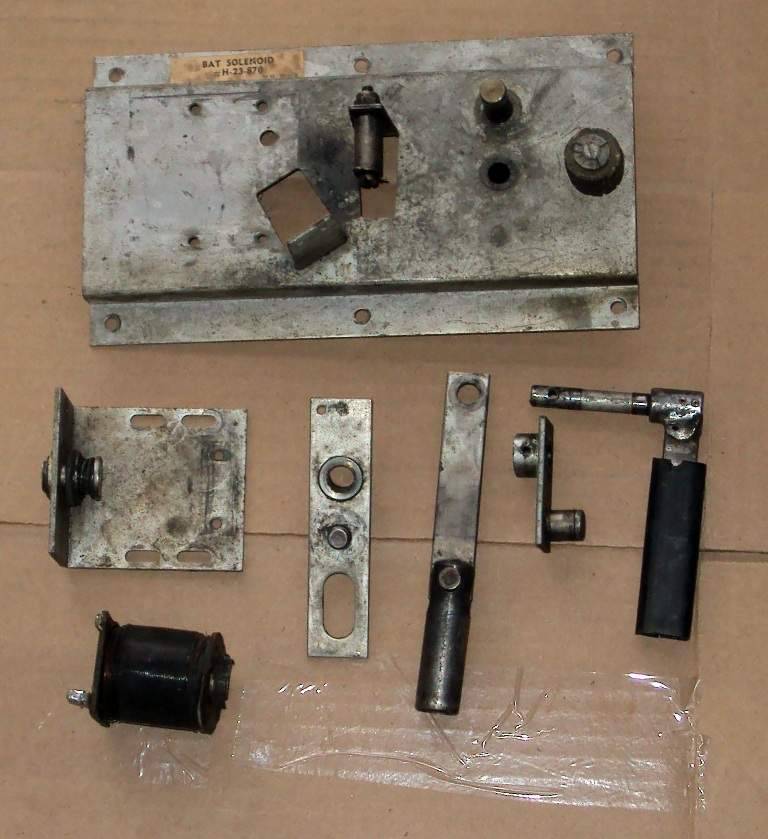 orig parts.jpg
What we started with shown above. 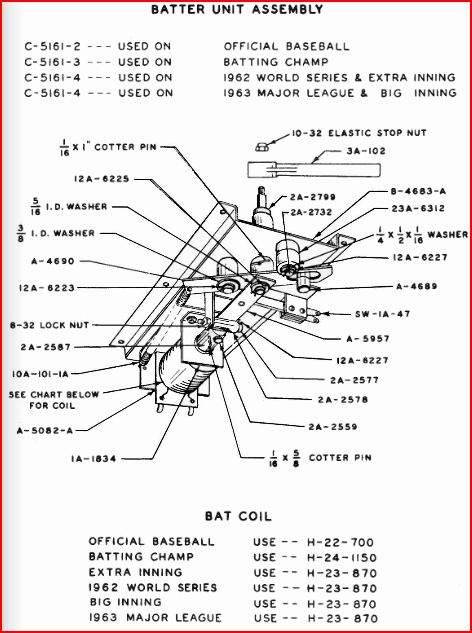 Slugfest Items to buy are shown below; 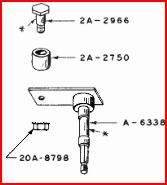 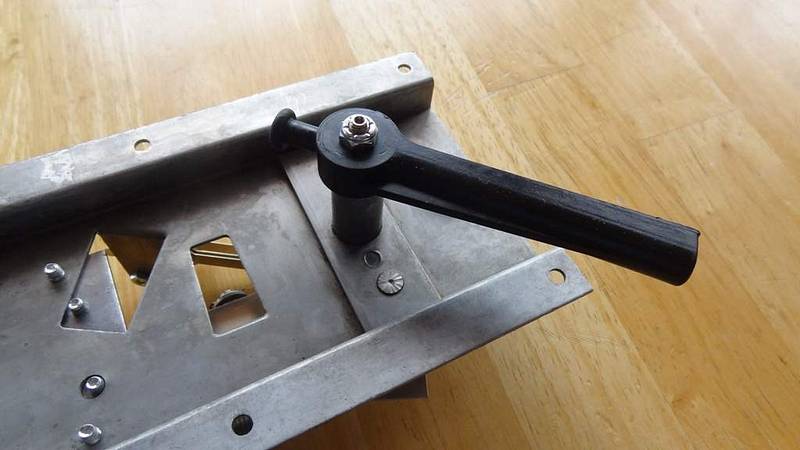 b) Exchanging the ‘Batter Unit’ parts

1. Remove the bat shaft A-4691 cotter pin from the assembly collar.
2. Discard the bat & shaft, and assembly arm. (See picture below). 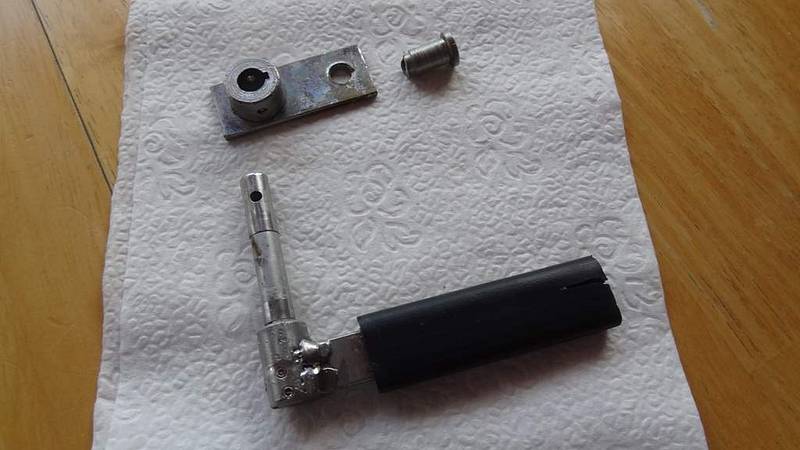 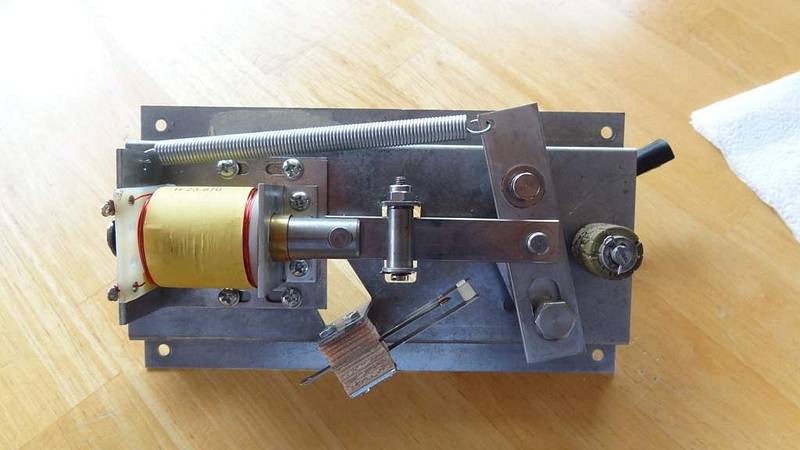 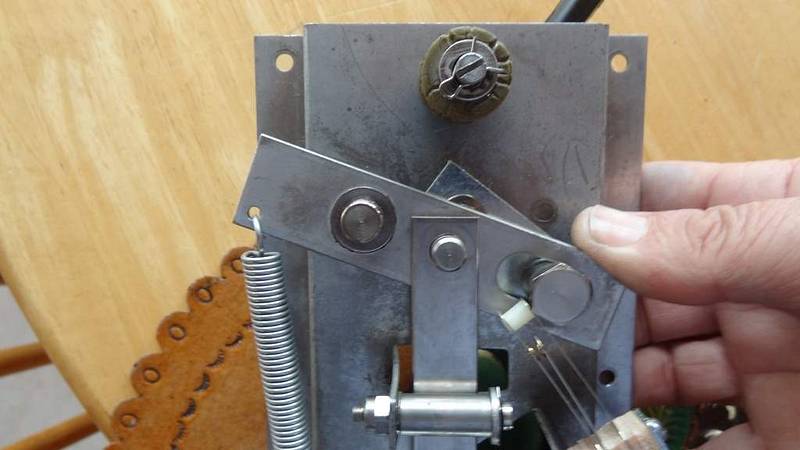 Mine has the new bat which probably accounts for the lack of modifications and mine is a newer series frame and mech.

Have you been able to find the bat stop rubbers?

I would like to see the differences between the regular thru the 4 series bats some how. Maybe ill go scrub the parts manuals.

Jeff,
No I have only the bat shown in the discarded picture in the original thread.

Per the books on the planetary pinball site the bat I refer to above is only one shown. The earliest book is for the 52-60 time period but is not inclusive by far. The link is attached.

I have not looked for the rubbers, seem easy to make though. It a quite soft rubber.

Jeff,
Do you mean the bat shown in post 1? If you do you can have it. Pm me were to mail.

What's the number of the replacement switch and spring for your "upgraded" bat unit?

What's the number of the replacement switch and spring for your "upgraded" bat unit?
I found the rubber bumper at Marco as Williams # 23-6312 (just $1.99 for it).

Don't think there are replacements for the switch

I make the switch from PBR parts and the spring is a #10-431 from Marco and in stock.

The switch looks like a Bally flipper EOS switch from an Eight Ball Deluxe.

How about adding the rubber bumper to your upgrade parts list? It is a different color and better material than the original one was.

What's the number of the replacement switch and spring for your "upgraded" bat unit?
I found the rubber bumper at Marco as Williams # 23-6312 (just $1.99 for it).

7-22 Update; Finally back in-country and had time to research what Ken asked for. The spring is in stock at Marco 10-431 and no need to make one. The slugfest has no switch so that you easily make from parts from PBR or equivalent.

The current replacement parts that Marco Specialties have in stock for the Slugfest batting unit that are universal with all earlier assemblies since the late 50's are as highlighted below. 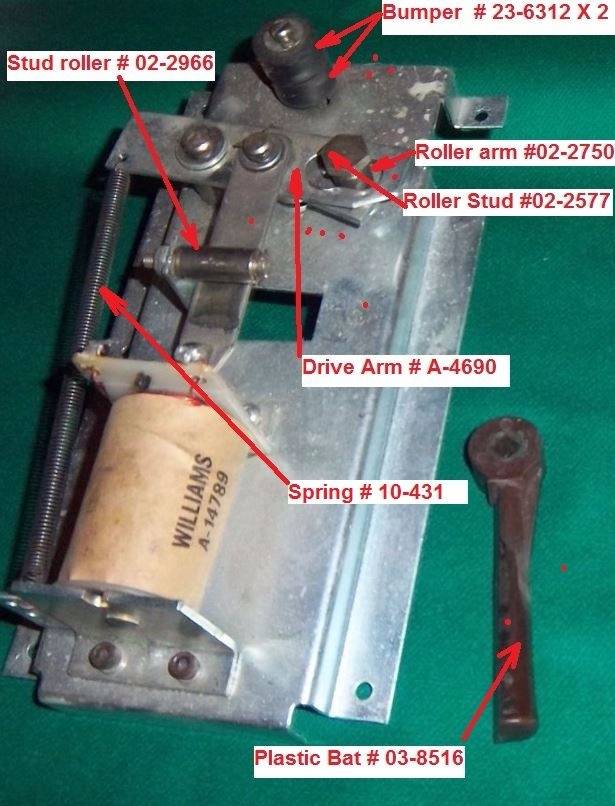 Slug Fest Batting Assembly (resized).JPG
I have attached the Slugfest parts list from the manual for part # confirmation. 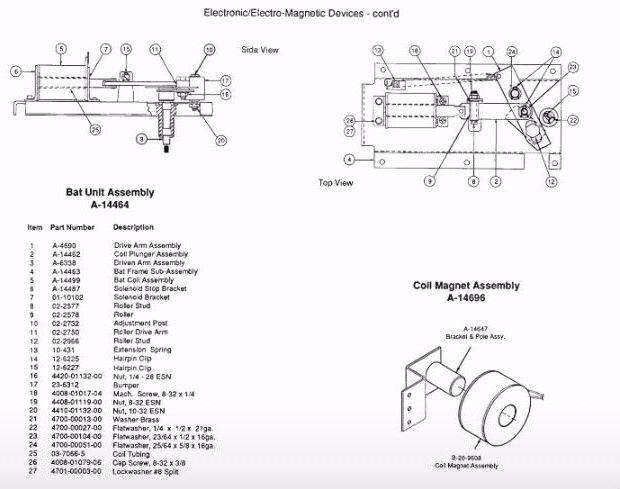 There's one part that is unavailable that need to be remade, the drive arm assembly, (#3)

Marco Specialities have been out of stock for over a year. I heard they were not planning to make them. I have been asked about it a lot and all my spares are gone now.

Only guy that has the skills and inclination is Scott Webb (G43crazy) How about it Scott?

I have a coupe of NOS one in the rat hole and have not thought about that part . Hey NYP send me a photo of your old
one . [email protected]

I have a spare batting mech base, probably with a few oddball parts still left on it. I had it squirreled away for a just in case situation but would cut it loose if someone gets in a pinch.

Anyone have the A-6338 Slugfest (WILLIAMS) DRIVER ARM ASSEMBLY?

Old thread. This is for a Williams Upper Deck. I haven’t torn this apart yet but the bat is really loose. Do Slugfest parts work for this assembly also? 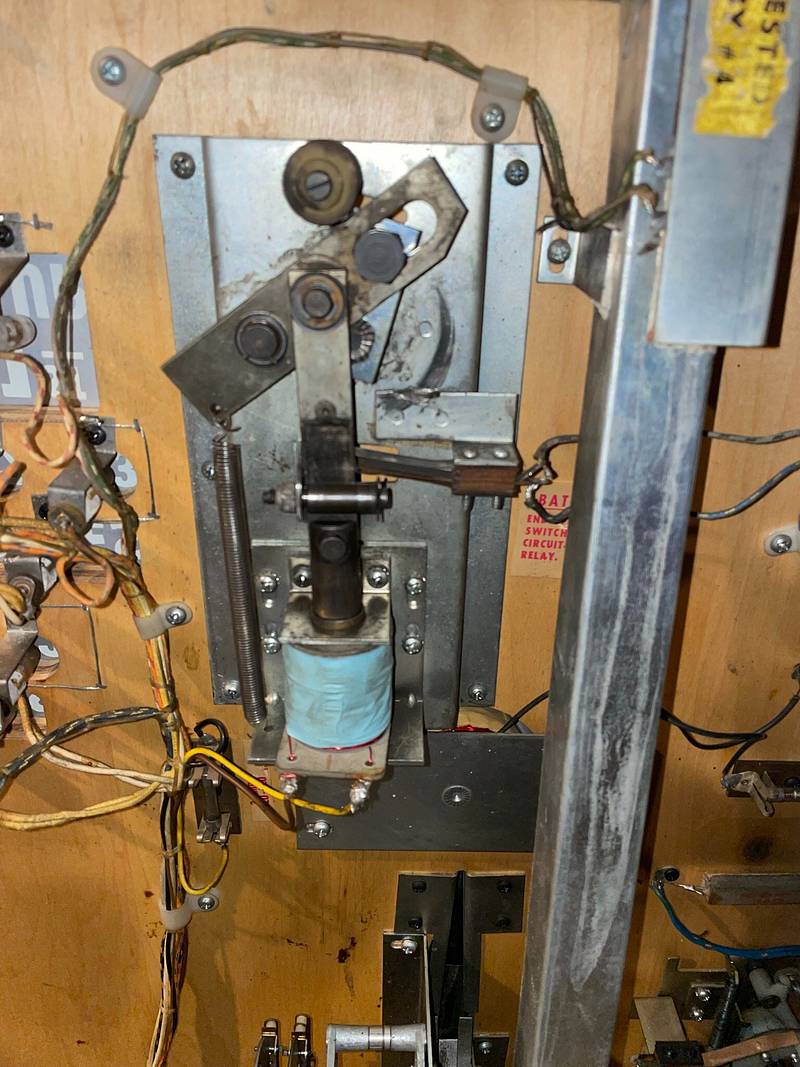 Old thread. This is for a Williams Upper Deck. I haven’t torn this apart yet but the bat is really loose. Do Slugfest parts work for this assembly also?
[quoted image]

Old thread. This is for a Williams Upper Deck. I haven’t torn this apart yet but the bat is really loose. Do Slugfest parts work for this assembly also?
[quoted image]

What parts do you need?? That looks pretty good to me just disassemble and a good cleaning. I have done several of these on WMS baseballs from 56-63 and thats one of the better looking ones. Once you clean all that old grease out of there (including the coil innards), add some Super Lube to where metal rubs on metal and I bet that unit will be snappy like new. ......unless I'm not seeing something

I’ll take it all apart and clean it up and see what I have. I’m pretty sure it at least needs a new bat. It has a lot of play in it without anything else moving.

I have the NOS connector arm for the bat assembly and NOS pitching motor if you land up needing them.

I have the NOS connector arm for the bat assembly and NOS pitching motor if you land up needing them.

Awesome, thank you. I will let you know.

Just an FYI for anyone looking, Pinball Resource has a replacement for part A-6338. It has sort of a bronze finish to it. It comes with the correct lock nut. 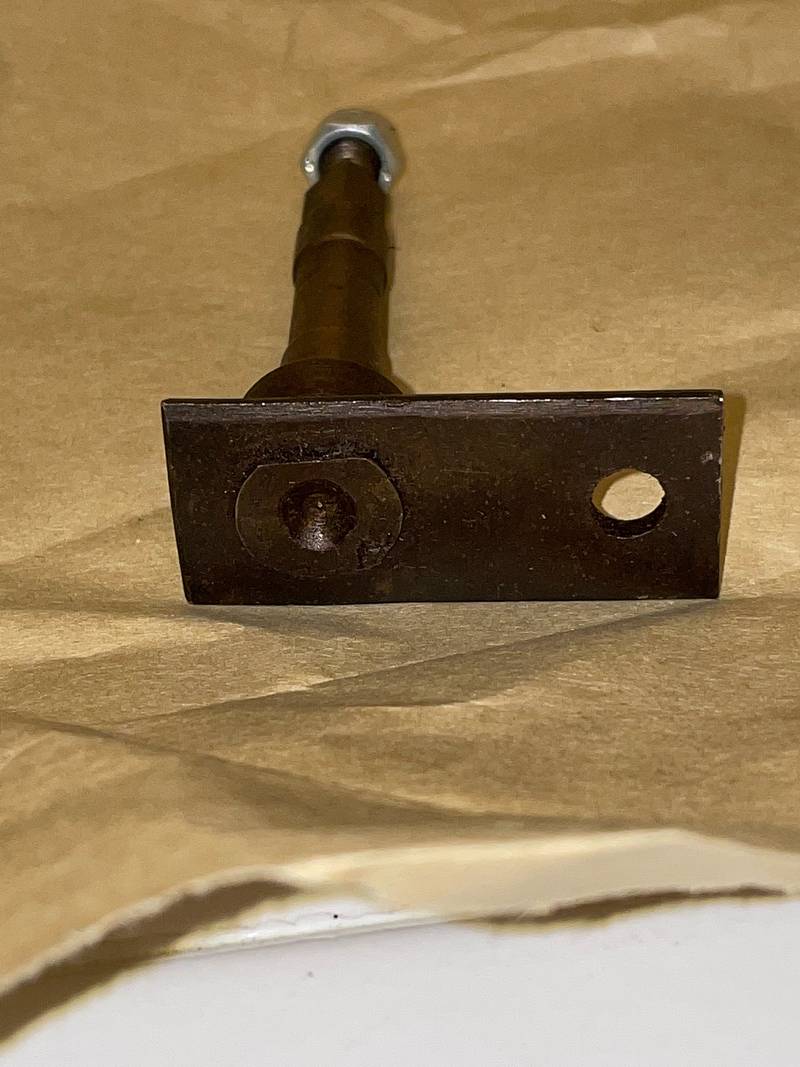 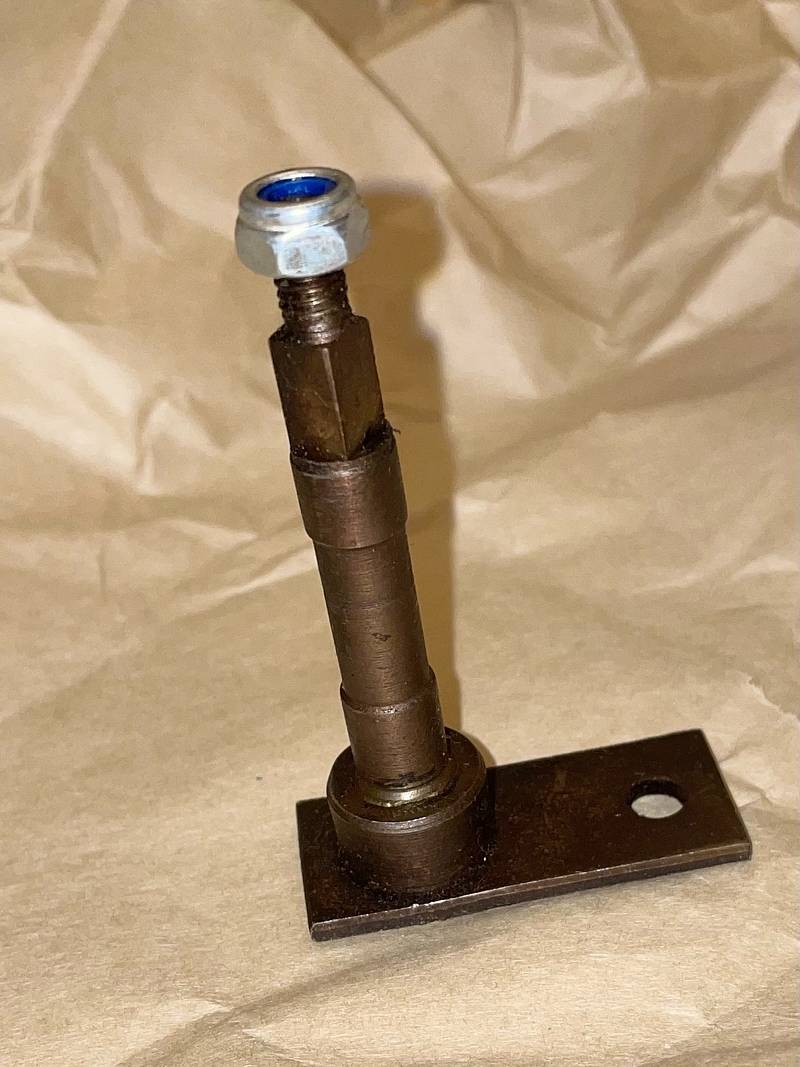