12 key posts have been marked in this topic, showing the first 10 items.

Post #124 Features matrix between pro, premium, and LE Posted by cletus (3 years ago)

Post #5344 TECH: PLAYFIELD. Playfield protector for ball hang ups below the target/behind the ramp Posted by mollyspub (2 years ago)

Post #8283 TECH: MECHS. Sarcophagus lock adjustment to stop it from immediately dumping ball out Posted by ChipScott (9 months ago)

Show all 12 key posts in the index

You're currently viewing posts by Pinsider Rum-Z.
Click here to go back to viewing the entire thread.

Well, according to the JJP fanboys GNR is now the best music pin ever and Maiden is basically a cheap home pin. That is a real bummer, as I really like Maiden--glad I now know better...

I ordered a new Iron Maiden Premium 2 hours AFTER the unveiling of GnR, LOL. I must really have issues.

Finally joined the club yesterday, after checking in on this thread daily for the last 2.5 years - absolute blast of a game!

Congrats! I just did the same at the start of November, also with an IMDN Premium. Yeah, I waited to see GnR but I bought an IMDN Premium instead. I love the game, what can I say?

I don't recall Stern ever issuing a "final call" for it, did they? Maybe it'll end up back on the line in the future.

I'm gonna tell you what got my autoplunge to 100%: I noticed that the ball guide would flex a little when the ball rolled through the curve. This flex can change the trajectory of the ball. I eliminated the flex by cutting about a 1" wide section out of a plastic Bondo spreader. This gave me a slender plastic wedge. I inserted this wedge between the gall guide and siderail. I should've taken some pictures of this. It's now buried under the plastics after I reassembled everything.

And what is this? Just opened the cab to find this laying on the bottom?

It's part ID #9 (part number 535-1878-00) "Ball Lock Keepout Bracket" from the 5.24 Ball Lock Trough Assembly on sheet 48 of the manual. It attaches via 2 #6-32 screws to the ball lock trough bottom. Mine was bent out of shape and hitting a couple of things. See the pic below of my bent bracket circled in red. I had to bend mine back into shape as my screws were so tight I couldn't remove it to work on, and here your screws just fell out. You can use diagnostics to lower the trough, then turn off the machine, so you can screw it back on. Provided you find the screws in the bottom of the cabinet. 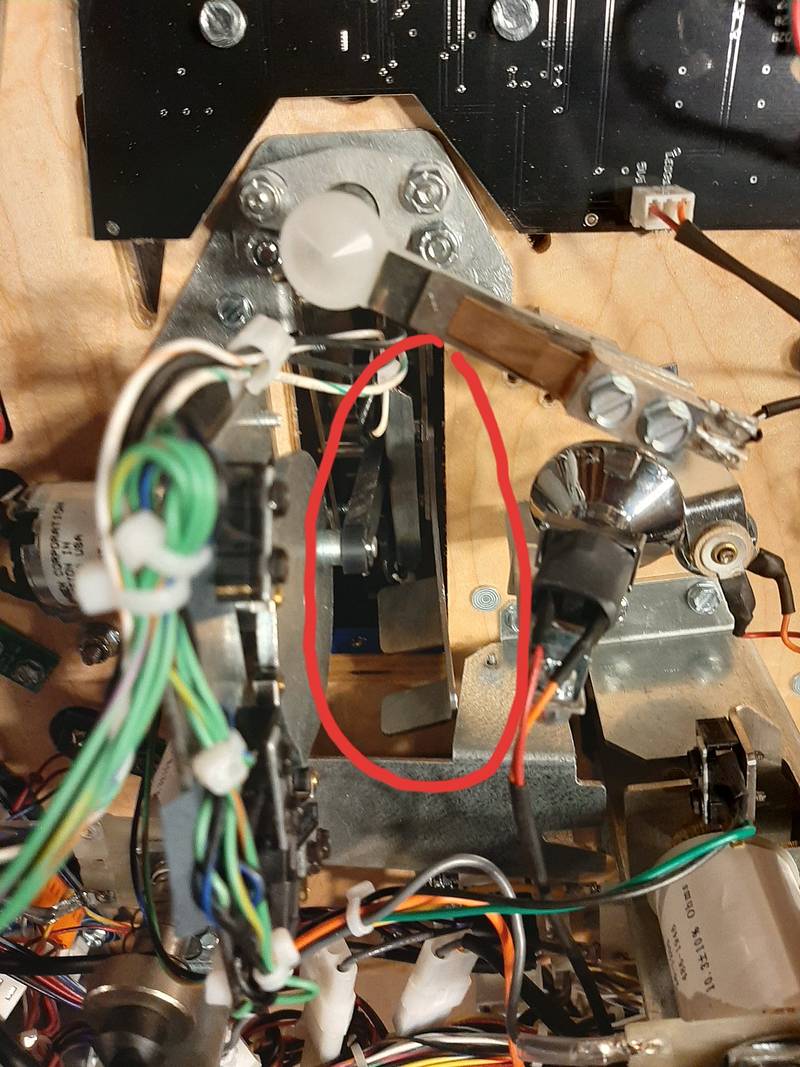 Are you sure lowering the ramp low enough it will be low enough to put the crews on? I was about to lower the entire mech..

From what I remember (and keep in mind my memory ain't so great), when I lowered the sarcophagus lock mechanism to the lowest position in the test menu, it tilted down low enough so I could get a phillips head screw driver on the two screws that secured the keepout bracket, but I just could not manage to loosen my screws. It felt like I was going to strip the heads out, so I gave up and bent mine back into shape right there.

I was never a big Iron Maiden fan simply because of the galloping basslines. I liked a lot of other things about their music, but I had to take that galloping bassline in moderation. Their music and iconography suits the pinball machine very well though. It's one of my favorite pins ever, and I don't mind listening to the song selection on the pin while I'm playing.

You're currently viewing posts by Pinsider Rum-Z.
Click here to go back to viewing the entire thread.