Unusual,rare,and unpopular games you would like to own. Or own.

The top of my list is , silver slugger, tz sector, strange science.
There are others . I just can't think of right now.

Guess there's no love for this, still glad I rescued it 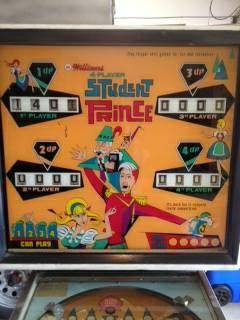 Torpedo Alley. I've had 2.5 of them... I never see them for sale in the states. It took me two years to find one within 300 miles of me for sale. Very strange layout and awesome 80's stereo sound. They made 1,000 of them but I had to smash one and I know of another that was smashed within the last year. If 400 of them still remain in the world, I would be shocked. I've heard it's slightly easier to find one in Europe but still, it's Data East's lowest production game that wasn't either a prototype or "1 of design" like Richie Rich or Kind Kong.

A 71 Bally VAMPIRE...for sentimental reasons only.

The top of my list is , silver slugger, tz sector, strange science.
There are others . I just can't think of right now.

it is TX sector and it is AMAZING!!!

Finally got mine working the past week and working on flipper rebuilds today.

It is hands down the BEST sounds/music in ALL of pinball. The cheese factor is through the roof. The multiball music alone is great!

Odd games I would like to have at some point >> anything that is funny or goofy or cheesey.

I'd really like to a pick up a Williams Black Gold some day:

I have a thing for oil rigs.

Well, I already own a Future Spa...think that one generally qualifies on the unpopular list.

Night Moves and Carribean Cruise would be on the list if I had space. I'd also like to own a Torpedo Alley...the light show and cheese is ridiculous on that game, and I've always been a big fan of submarine movies. Hunt for Red October, Crimson Tide, etc...

Have: None. Don't miss them, either. Well....I do have a Stern Viper and Catacomb and Nine Ball and Seawitch. If you count those. LOVE those.

Williams Star Light, at only 100 made I probably will never own one.

Sorry I had to let my Quicksilver go, but it's the same for many folks - limited space prohibits me from keeping them all.

*edit* nvm, was something else.

I'd really like to have a Genesis, if for no other reason than to put in the alternate metropolis translite. One of my favorite movies all time. I wonder if there are any alternate cabinet decals as well.

it is TX sector and it is AMAZING!!!
Finally got mine working the past week and working on flipper rebuilds today.
It is hands down the BEST sounds/music in ALL of pinball. The cheese factor is through the roof. The multiball music alone is great!
Odd games I would like to have at some point >> anything that is funny or goofy or cheesey.

Glad to be reading this. Enjoy !!

There's tons of neat/quirky stuff out there. Some that are high on the future list for me are Corsario, Spooky, Terrific Lake, A.G. Football, Galaxy 2, and Slalom Code 0.3

I'd like to have a Wipe Out even though a part of me knows it's not that great. Just something about the theme and the ski lift conveyor belt does it for me.

2 somewhat rare machines I had at one time. 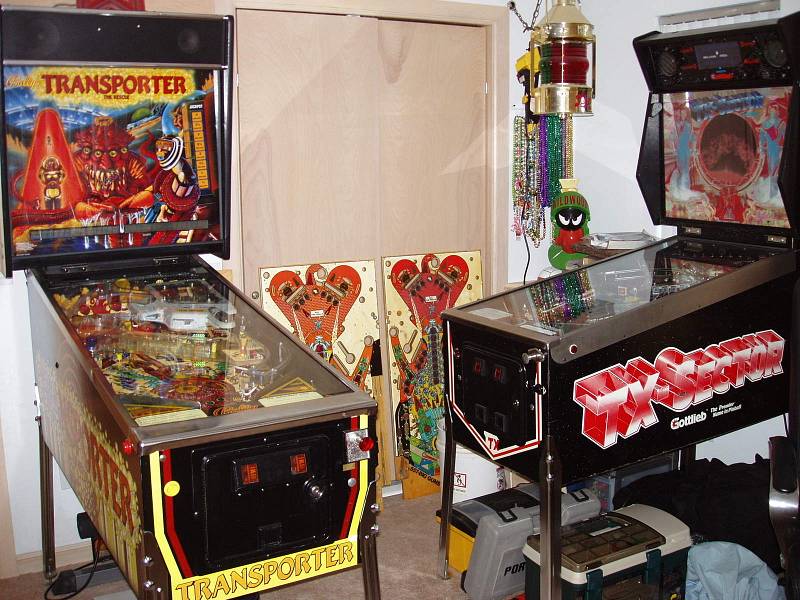 Have another Transporter now and it will never leave.

For some reason I like Big House.
Never played it but something about it intrigues me.

A month or so ago I picked up a Bone busters. supposed to be Ghost Busters but somehow didn't get the license. It's pretty cool and you can definitely tell it should've been GhostBusters.

(Wow, lots of Premiers seem to be occupying this list)

I'd really like to a pick up a Williams Black Gold some day:
http://www.ipdb.org/machine.cgi?id=306
I have a thing for oil rigs.

Transporter the rescue is one that would be great to own for sure.

Would Night Rider count? I love the trucker theme.

As far as one I have owned, I had hurricane which is considered unpopular. I liked having it for a year.

I really want to find a Al's, MC, Airborne and PP sometime in the near future.

A couple of unusual games I have are Bally Target Roll, and Wms Turf Champ.
Would like to find a QBert, Orbiter, and Hercules.
Steve

X's & O's. The darn game just won't leave. It was on the market for a while, but I ended up keeping it. Stupid game, but it is one of those games that makes you a better player. When you get near the end of filling out a board, and you need to switch, and then hit that one last target, it is fun. A wild shot and it bounces and his that target before the switch from X to O, and you fail and start again. Definitely a mood game. If you are not in the mood for it, it can be a very frustrating game.

I stumbled onto an 87 Victory and love it. I've barely ever seen it mentioned on any pin site. My best guess is that most of them ended up in Europe.

The pin I want the most is a Shaq Attaq.

Like half of my collection, lol. I really enjoy having unusual pins

I own Hi-Score Pool, which is a unique game that is fun as hell and competitive when playing two players. Not exactly a pinball since there are no bumpers or anything other than 2 slings, 2 flippers. 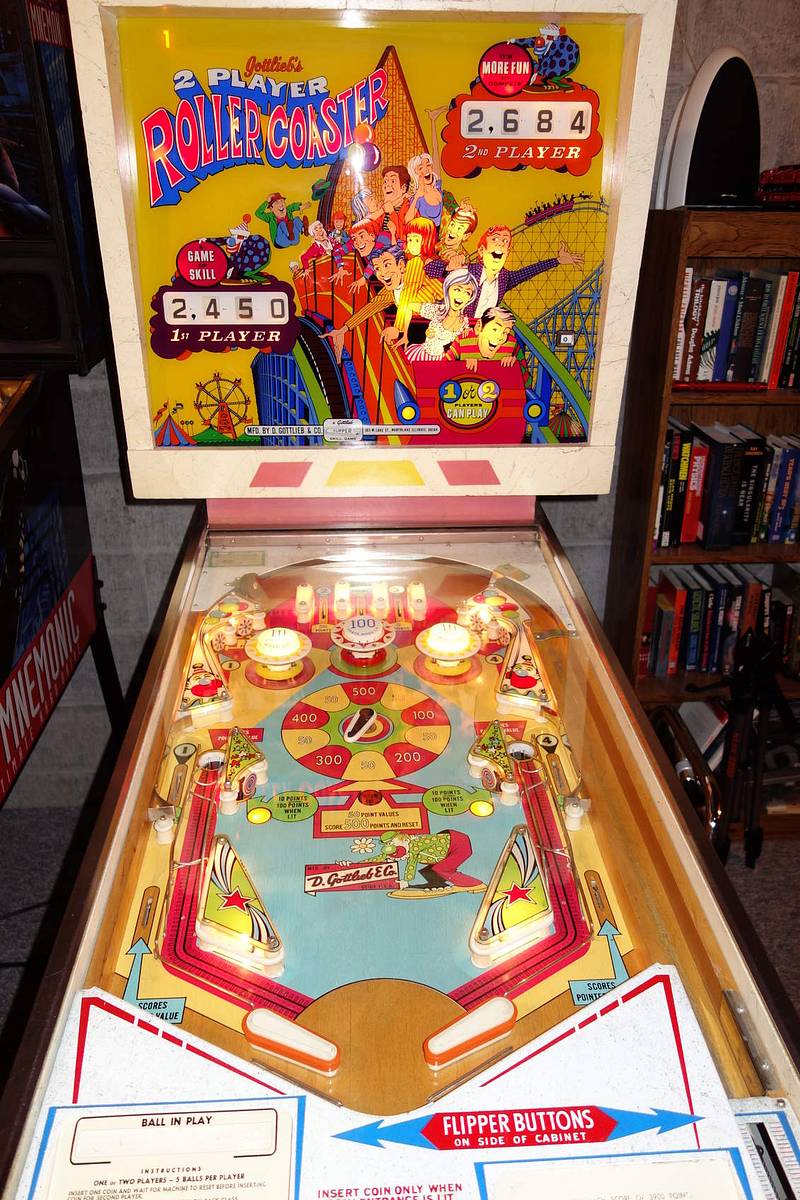 Unusual or rare games I'd like to find are:

Blackwater 100, Orbitor 1, Dakar, Krull, Rat Race.
(hopefully someone will read this one day and contact me about any of these)

Some of the games I have that kinda fit this thread are:

You got that thing working yet?

Always on the lookout for Alvin G USA Football.

Not super rare but Cosmic Gunfight is a cool game that I would like to own .

Not sure if this should make the list, but I have a Williams Toledo http://www.ipdb.org/search.pl?any=Toledo&sortby=name&search=Search+Database&searchtype=quick

It's falls in the unpopular category I guess. But unique because the center targets are actually flipper buttons instead of spot targets. I don't think any other pins use flipper buttons this way.

EGottlieb New York EM (only 300 made?) is probably the only game in my collection that qualifies for this thread, although I did have one of the two known Genco Flying Aces at one point.

I really want to find a Gottlieb Star Race to restore. The art is amazing. Never seen one in person.

As far as unpopular, I have a Popeye which is IMHO an underrated game, it has many modes and though it has some tough/hidden shots it is a fun game to play. I'm not sure how rare it is, but you don't see them often. It is also not going anywhere except maybe to some upcoming shows!

The only rare 1 that I would love to be able to play and maybe one day own would be Pinball Circus.

I had a Bally BMX; a friend has it now. In regard to oddities, there's a Gottlieb Challenger that trades hands around here every once in a while. Part of me wants it, part of me thinks "hideous monstrosity." Not sure what to make of it...

For me, Joust. Played it lots at the local arcade growing up.

One of the, if not the first game with ramps. No need for repros either.

It's always fun to play a game you have not played before and find a hidden gem.
Especially when it's a game that is not highly sought after and can be had for a great price.

I always wanted a Granny and the gators. I don't know why perhaps the artwork, I think it looks cool.

I always wanted a Granny and the gators. I don't know why perhaps the artwork, I think it looks cool.

One would look nice next to my Baby Pac... Maybe it'll end up on my want list??

Unusual or rare games I'd like to find are:
Blackwater 100, Orbitor 1, Dakar, Krull.
Some of the games I have that kinda fit this thread are:
Goin Nuts, rare blue/red version of Joust, System 80 version of Incredible Hulk, Solid state test piece of Solar City and a few other hard to find games listed in my collection.
Steve

Pinball Circus . I think only two or three were ever produced . This would be my grail pinball.

I have a PP and Magic Castle -

would love to get a few more rare ones some day...