Unknown german NSM model discovered - anyone got an idea?

Hello, I just tumbled over this cabinet machine in my storage, I bought it some 20 years ago and forgot about it. It's from the german manufacturer NSM-Löwen who produced their own machines in 1985-86. They seemed to be not very successful and stopped making pins.
4 models were produced, HOT FIRE BIRDS, THE GAMES, COSMIC FLASH and TAG TEAM, 2 of them were Gottlieb-licensed, 2 of them were original european designs.
Now I got this machine here, no doubt based on Stern's Flight 2000 but with a standard-sized playboard. In 1985 Tennis became very popular in Germany and this explains why such a theme was chosen.
Maybe this is a Prototype of the 5th NSM-machine but never went in production?
Sadly the backglass is missing, of course I regret this but that's the way I got it. 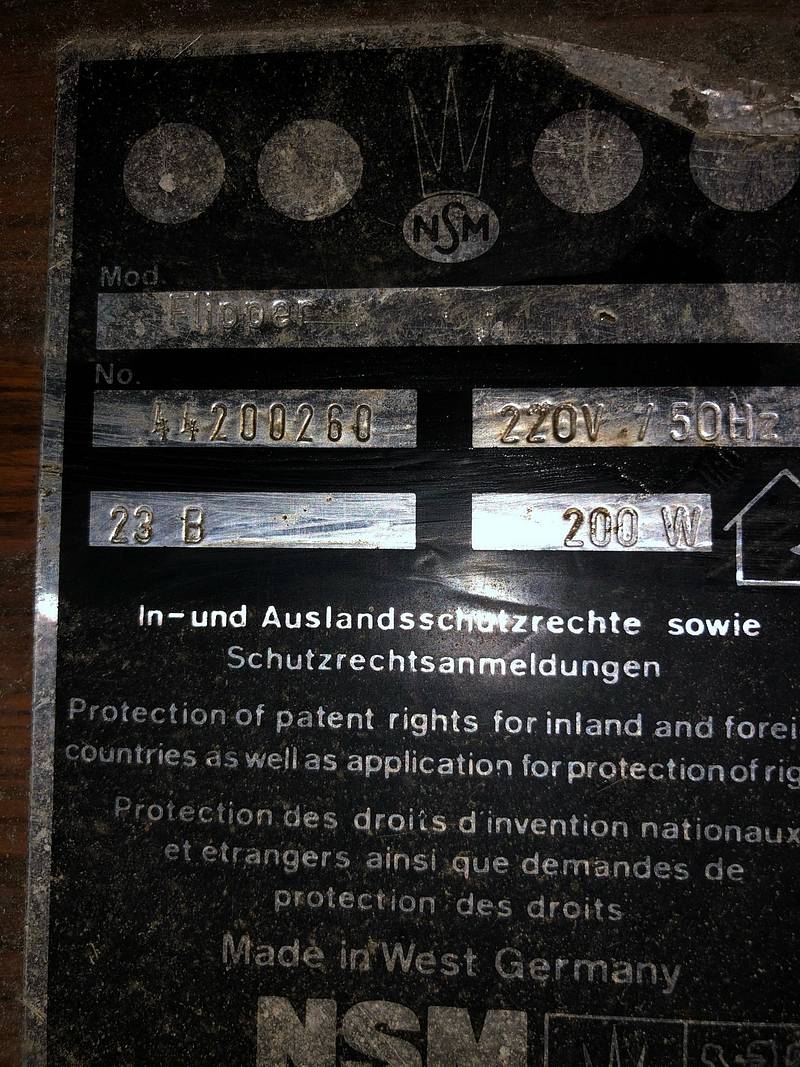 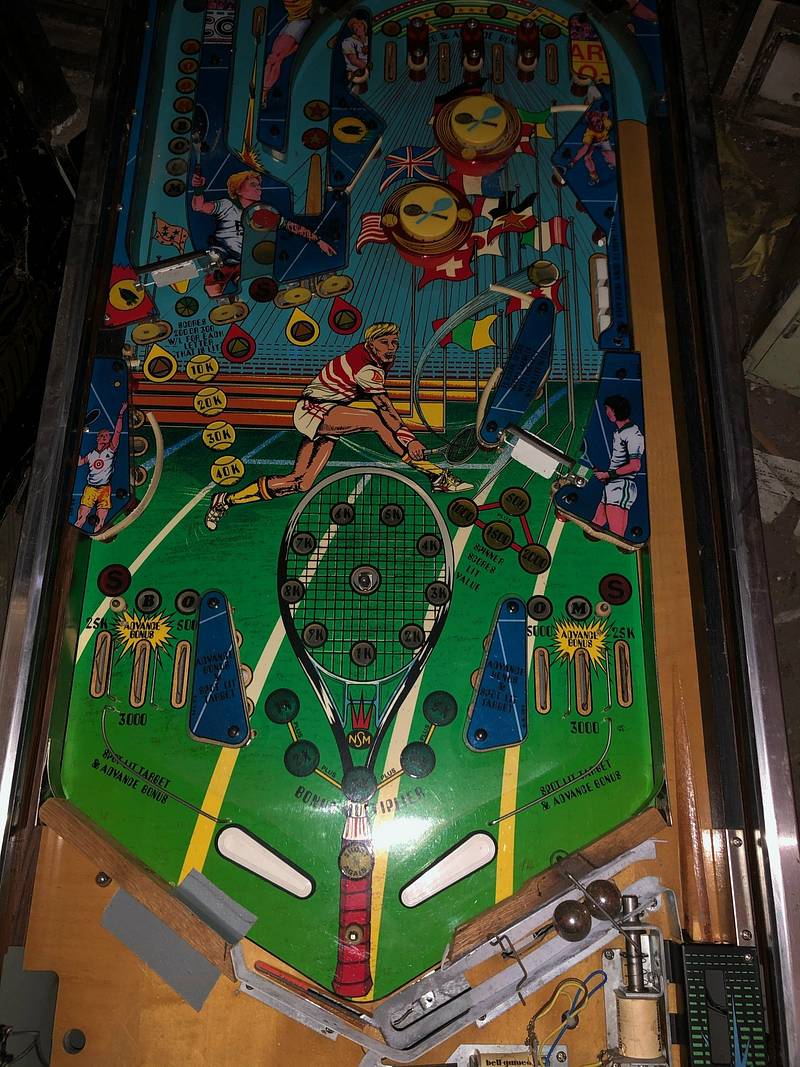 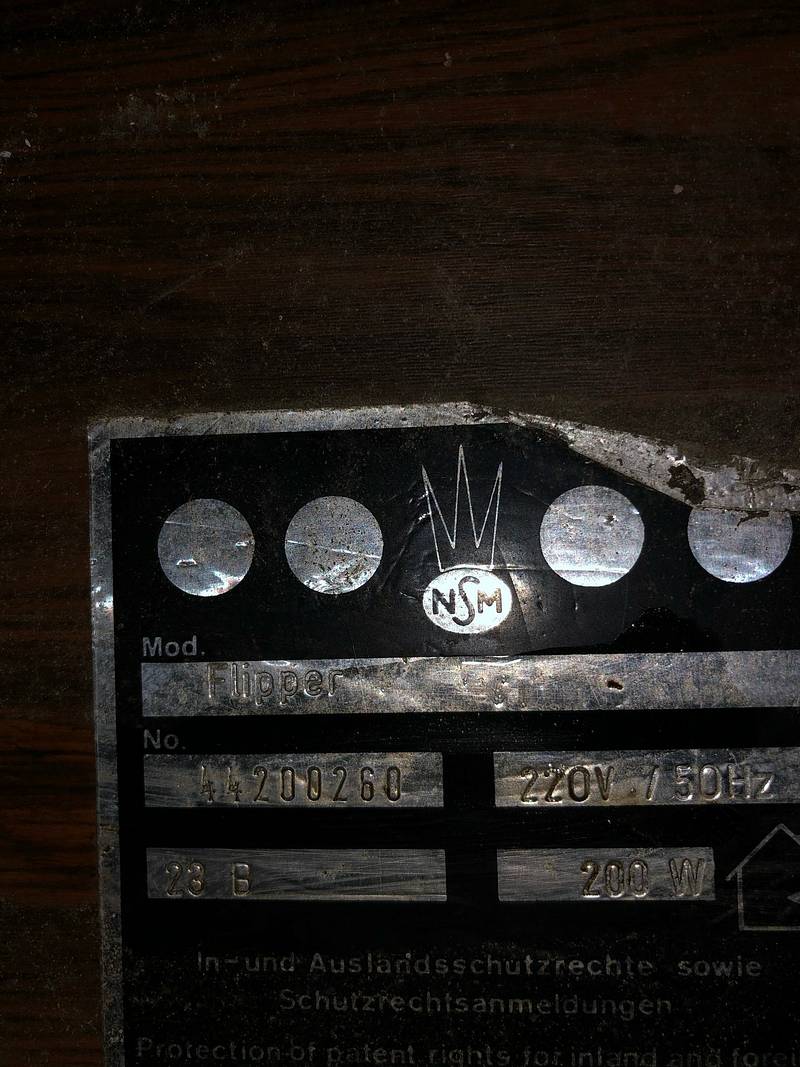 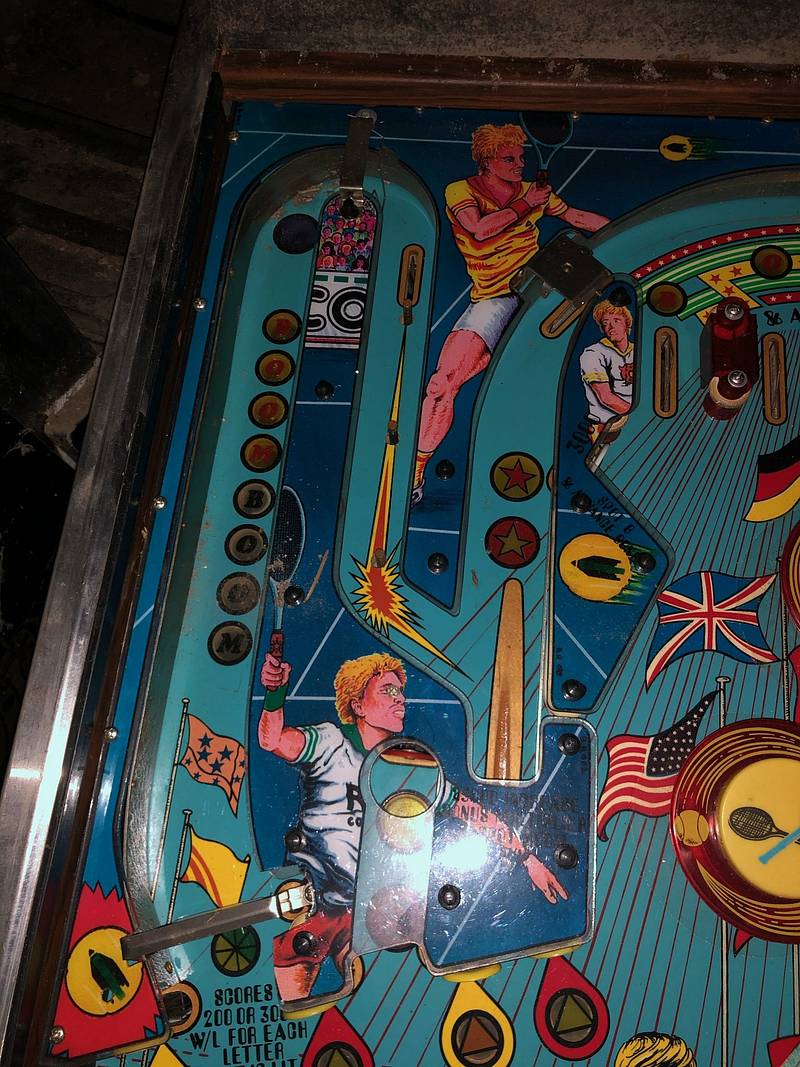 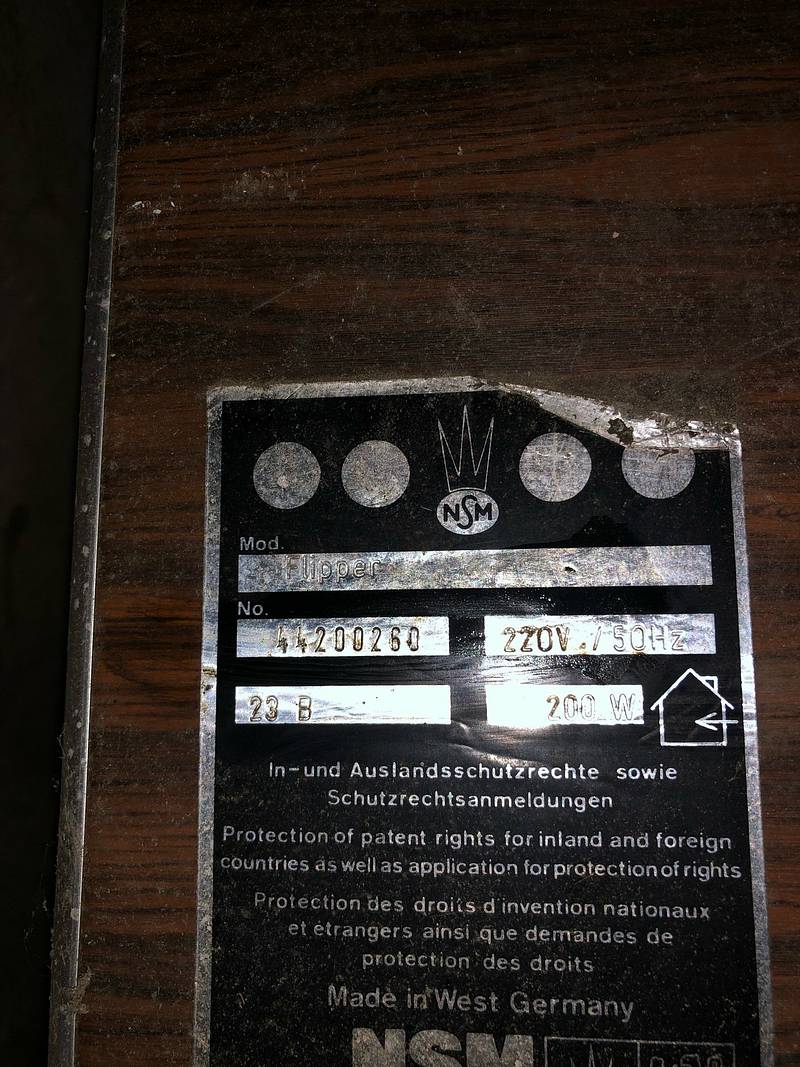 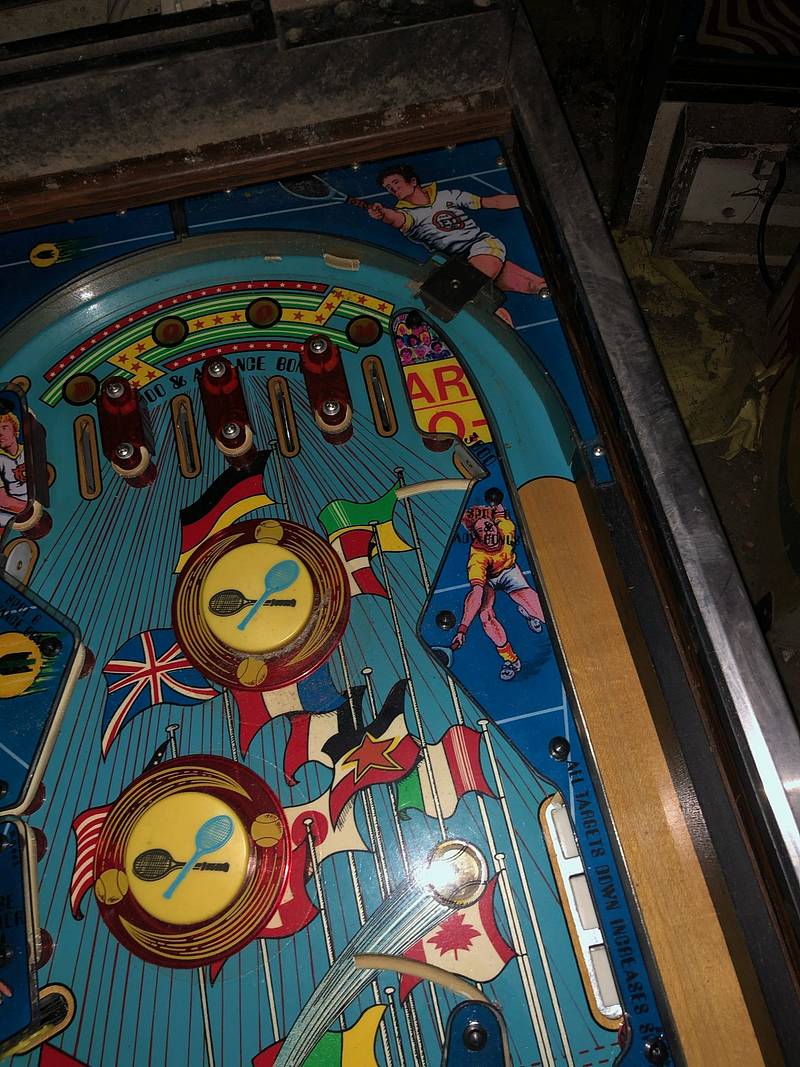 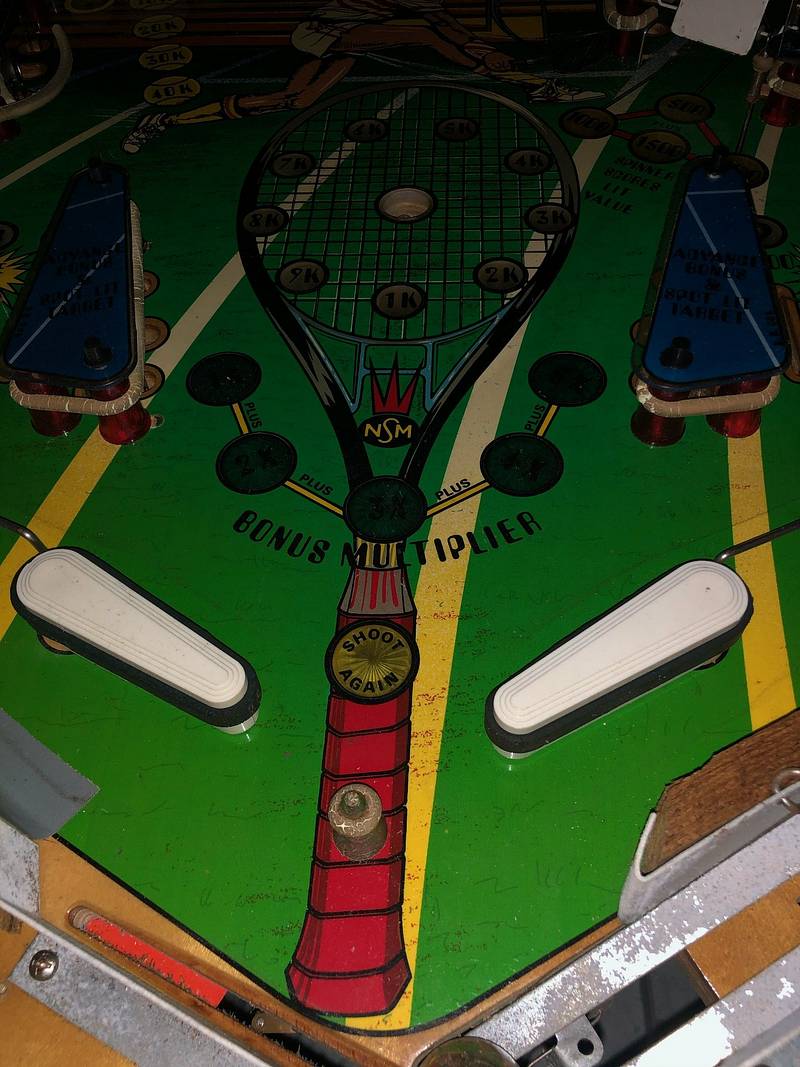 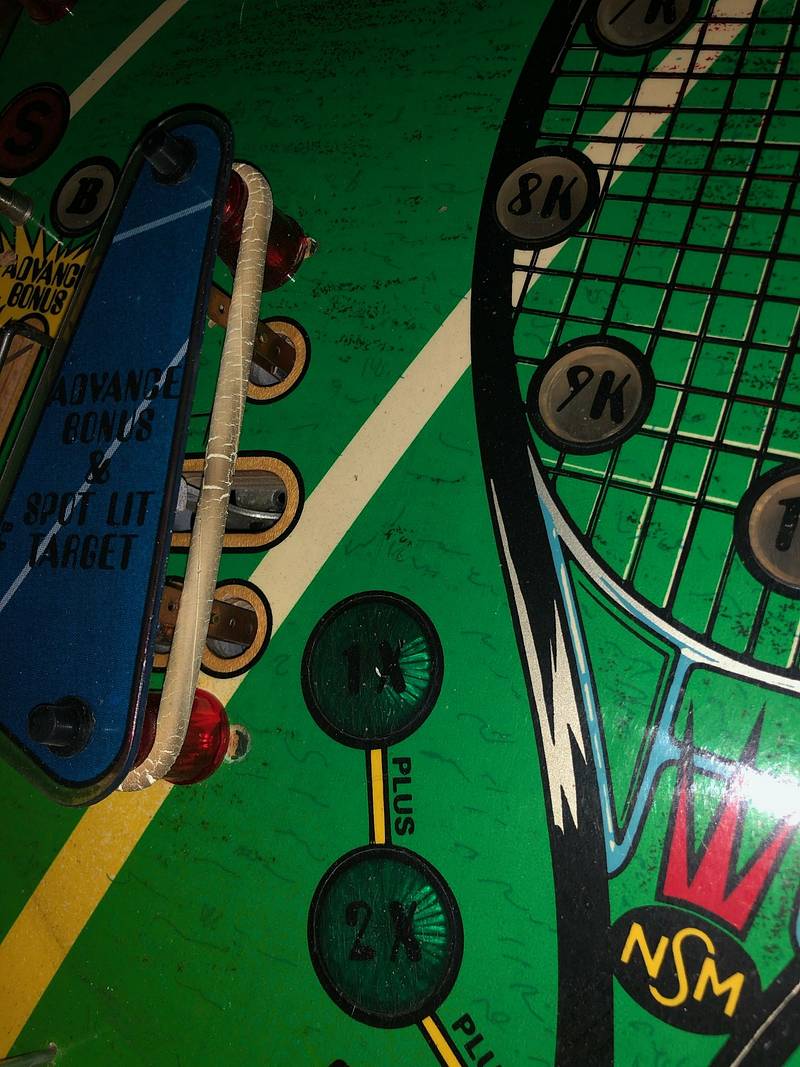 Definitely a homage to Flight 2000. Interesting that while the manufacturer's plate is in German, English, and French, the playfield artwork is all only in English.

If it’s standard size then it’s probably a copy of Gamatron. With the double pop still in there.

That is a really cool find.

Löwen still to this day is one of the largest producers of "Geldspielautomaten" (Slot machines) in Germany. Maybe get in touch with them and potentially there is still someone from back in the day who remembers. Or maybe they can and least send a flyer or anything so the backglass can be reproduced?

That is very cool to see. Even now, we are still finding games that were previously unknown.

Though I unfortunately do not have any info, nor can I find anything. I will try and do a patent search, there may be something listed, but it's a long shot.

I love seeing rarities and unknowns!

It looks like a non-licensed "generic" Boris Becker game. Becker won Wimbledon in 1985 and the Germans loved him.

Ok, digging up a little bit of info I'm gleaning from flyers and non-English forums.

NSM pins were all built into what they called their "UNI-Pin" platform series. This was a single generic woodgrain cabinet with interchangeable playfields and backglass. Looks like they were trying to get moving on this concept at the same time that Pinstar was trying to get some headway with Gamatron. Some of the articles I linked below hint there may have been a link between NSM/Lowen and Pinstar. Looks like NSM was also trying to break into the video game market too with a universal style cabinet. They were big into jukes at the time though.

On a French forum, somebody mentioned in 1987 they received flyers from NSM that included Gamatron, which lines up with the theory this was a Gamatron retheme. The person who said he had the flyers from NSM left his email in the thread, it's jean-pierre.cuvier@numericable.fr but that post is 14 years old, so who knows if the contact info is still valid. It's also in a French speaking forum, so be prepared to have to converse in French.

Has anyone reached out to

I tried to get some Information from NSM in Bingen Germany this morning. Lady on the phone gave me there Support number.

Not any older co workers nore any archive material.

Interesting only 4 models have been confirmed by pinsiders. This is the 5th. Some info on the other models here,

Thanks, I knew about these NSM‚s
I also have a Cosmic Flash.

There's one more for you to snag on ebay right now.....

Steve Young used to sell NOS HFB playfields. I bought one from him and found a machine.

I have schematics of the CPU and driver board if anyone is in need. 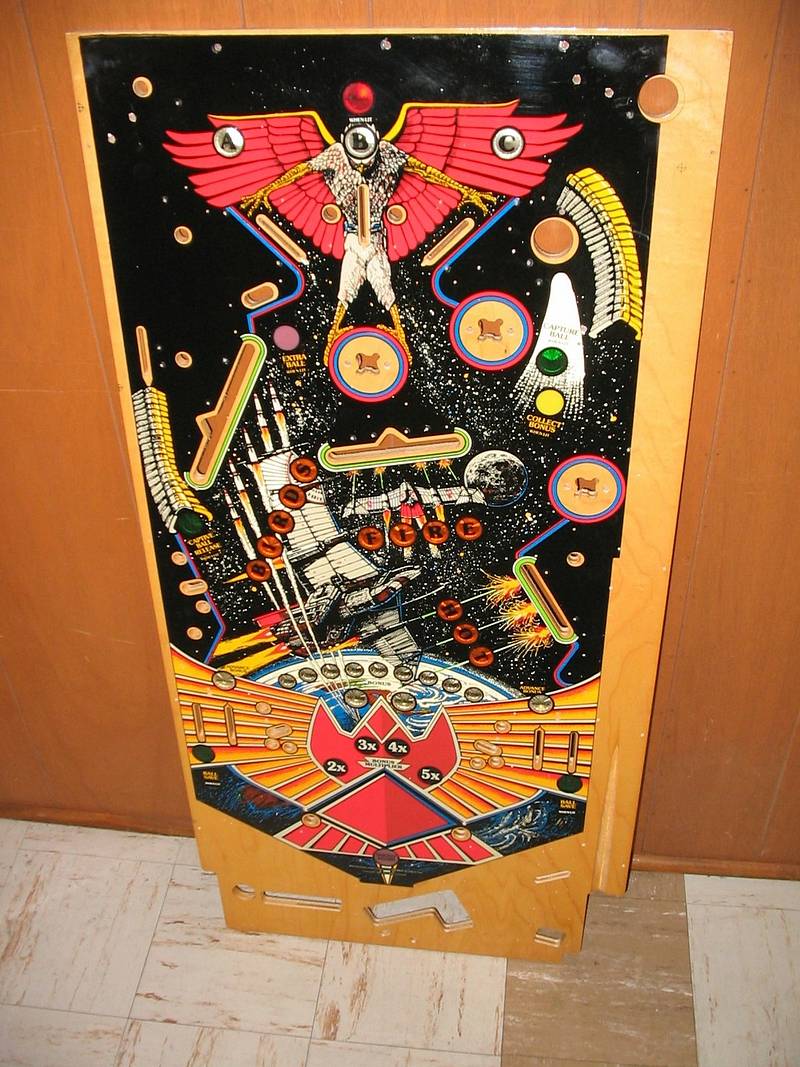 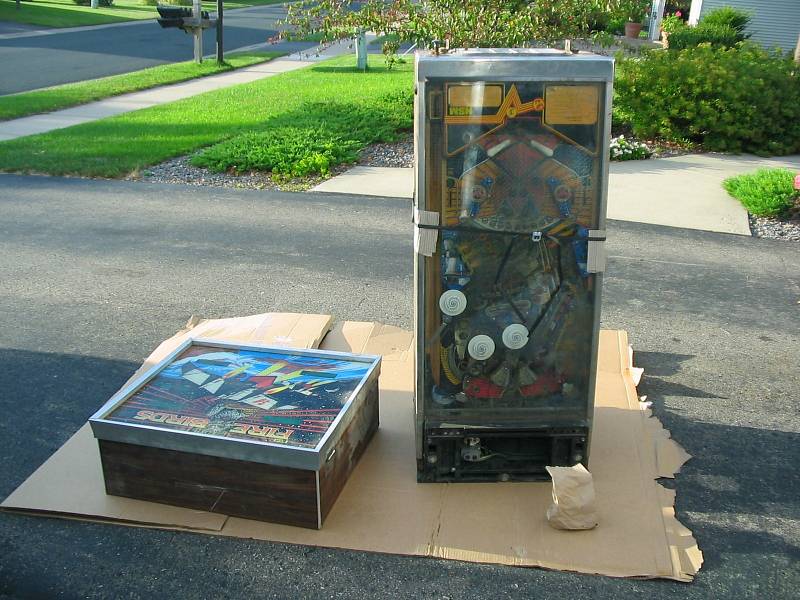 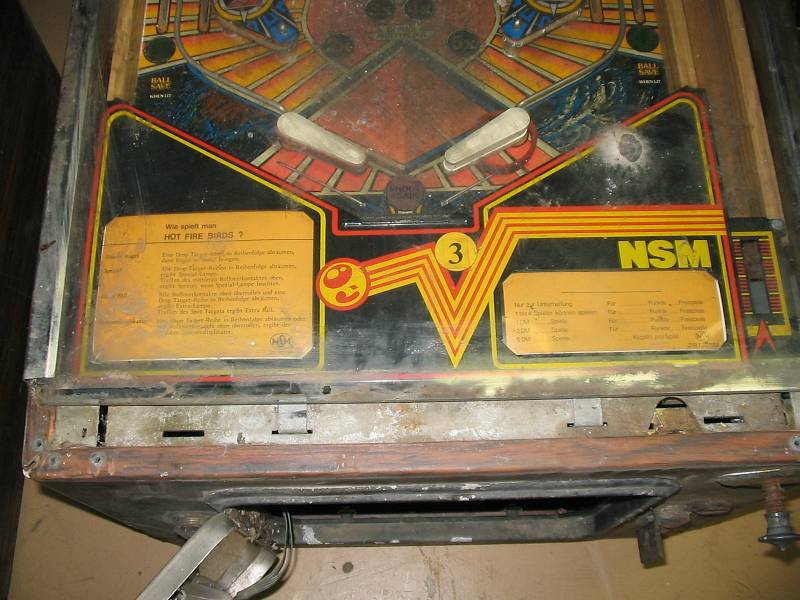 There's one more for you to snag on ebay right now.....
ebay.com link: itm

Ugh I hate that guy, he tears ads out of magazines and tries to sell them, flyer collectors hate that guy! BUT thanks for trying!

I'm looking through my notes (because my memory from back when I had this machine is shot) and it appears if you get stuck while trying to do board repair, you should be able to use GTB system 80 technology to take over the function of the machine. Though I assume moderate modification will need to be done. You may have to choose software that is very close to whichever NSM is most similar to whatever GTB made at that time.

Has anyone reached out to I_P_D_B ?

Yes, I informed Jay about this and he's now in contact with Steven.

HHaase
GAMATRON - that's it! I knew there was some kind of Flight 2000-playboard reduced to standard-size somewhere but it didn't come to mind when Steven did send me his pictures.

It fits perfectly to the NSM-series - COSMIC FLASH was also a design used by another european manufacturer, and this "Tennis-Theme" could have been the 5th NSM-machine. Germans are notorious for their craze when "they" become champions in any kind of sport. When they get world-champion in soccer everyone plays soccer, when Schumacher was champion everyone wanted to race cars and in the mid-80ies every brave german played tennis - and NSM jumped on it retheming GAMATRON.

When I visited the german "IMA 1986" in January 1986 all 4 models were shown from NSM and they all seemed to be optimistic. But soon afterwards the whole "UNIPIN"-thing vanished and quickly became forgotten. Operators didn't like the very heavy metal-cabinets, this may have been one reason, but my personal opinion is the main reason why the NSM-pins disappeared so quickly was that the brandnew Williams HIGH SPEED which had its world-premiere at this same "IMA 1986" in Frankfurt changed the whole world of Pinball and NSM realized that their system could not keep up by any means with the new generation. Maybe the NSM-management figured out it would have been too risky to develope a similar new technology that could keep up with Williams so they prefered to stop the whole short-lived UNIPIN-adventure.

For anyone who's interested - NSM and LÖWEN are of course the same company, maybe for tax-reasons they split manufacturing and distributing. LÖWEN was the german distributor for BALLY until 1974 when Bally took over the german company WULFF. The LÖWEN were the ones with the idea to spend the Bally-machines german lettering in the 60ies.

This is how I got mine working again; I stumbled upon this NSM Hot Fire Birds some 6 years ago.
Some lights worked but no sound no displays and no startup. It tried to fix it, checked the fuses, traced all the wires, tapped on the boards here and there but I had no clue whatsoever where to start.

I called around and send emails (to the NSM company also) and various local pinball repair shops and people in ‘the scene’ and they all started laughing without exception and told me NSM machines are pieces of crap.

One shop advised me to put it in the garden and plant flowers in it cause that’s all they were good for (I kid you not).

As it turned out later this machine had been travelling trough the pinball circuit for well over a decade, went from owner to owner and no one could or wanted to fix it. That’s why I got it for exactly $100,-

It sat in my room for a year like that until a colleague of mine visited me and suggested to bring over his oscilloscope to just check some components, he soon recognized a RAM as such, (I didn’t have a clue) and a few minutes later he thought he found the problem in the shape of the RAM being dead/empty/broken. We checked the ram’s no. and found one online for $1,79 and replaced it, a manual in pdf was also found online.
The manual stated the need of a ‘service-tastatur’ wich you connect to the machine to program it’s memory / settings, these ‘service-tastaturs’ are also used to program the companies vending machines so I found one on Ebay for $50,-, we hooked it up, followed the guidelines from the manual and after a few hiccups it started right up !

The battery had leaked but didn’t do any damage and I played it without any problems for the last 5 years, it still looks great with little to no wear on the playfield, some old school German reliability there.

Last pic is the service-box, there are 2 versions, this black one and a bigger blue one which is for vending machines of a later manufacturing date, as far as I know the black ones work for the ‘84-‘85 machines. 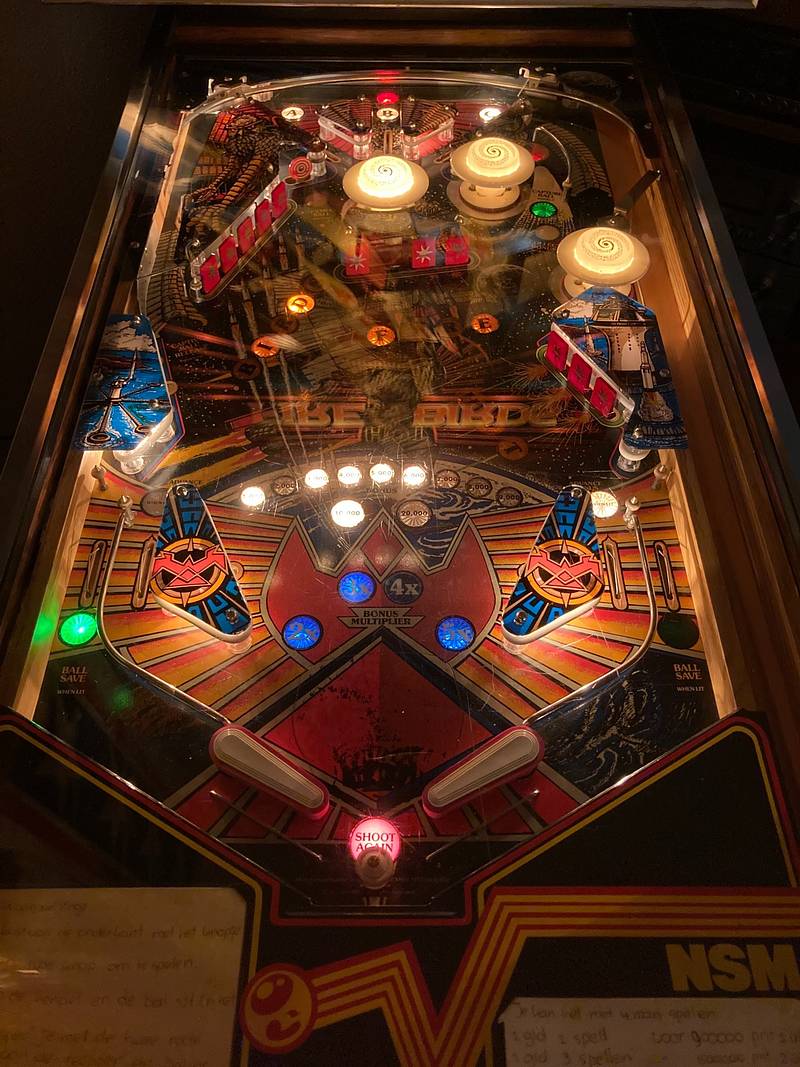 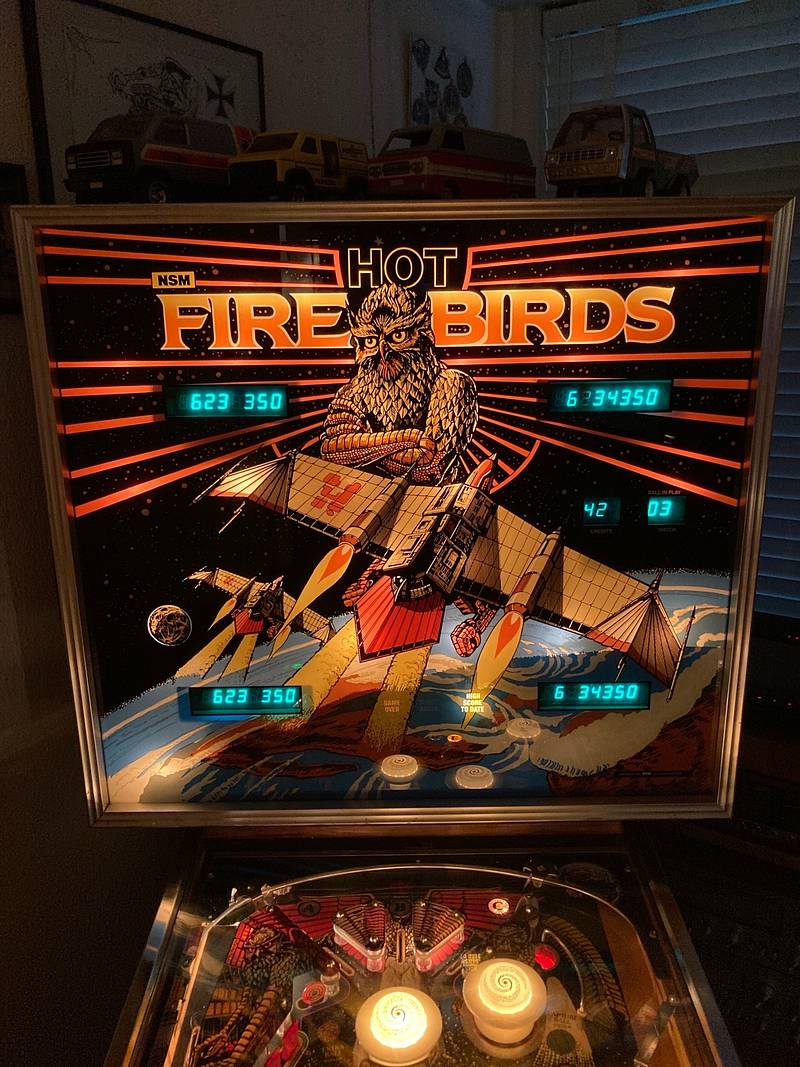 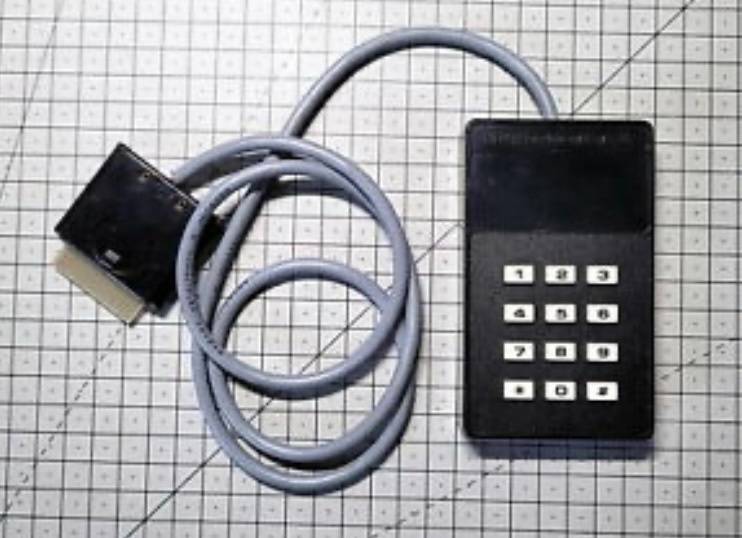