Looks like I’m headed out tomorrow to pick up my first ever pin (Stern Jurassic Park pro). What best practices should I know about to get this packed, loaded, and driven 3 hours back home without damaging the cabinet, electronics or glass? Buying a dolly on the drive over. What other supplies and/or tools will I need? Thanks!

Cardboard. Packing blankets. Shrink Wrap. All your tools ( just in case standard sizes on the game have been substituted ).

Be sure and remove the balls from the game.

Make sure the vehicle is big enough. You definitely don't want to go all that way and not be able to fit it in.

I would recommend using a large, thick, pvc pipe to roll it in if you have to load or unload by yourself (it makes it easier even if you have help too).

I transport with the legs off. Bring a ziploc bag to put the bolts and keys in. Take the pinball(s) out. Put a doubled over blanket over the playfield glass, and fold the head down. Wrap it with shrink wrap.

Put cardboard down on the bed and use the pvc pipe/cardboard to slide it in.

Depends on how particular about cosmetics. You can go without any protective material.

I take the balls out. Fold the head down. Cinch it with a ratcheting nylon strap. Remove the legs. Dolly to the car. Turn the machine so the bottom is facing the vehicle and take it off the dolly when the machine is the right distance away that when you tip it over, the front of the machine will be resting on the tailgate of the vehicle. (I'm doing this with a RAV4, which is an SUV with a low tailgate).

I deadlift the other end while leaning towards the vehicle (and most of the weight is being held by the vehicle). Then just slide it in. (You could have a piece of cardboard in the bottom of the vehicle to get it to slide in easier).

I don't secure the game in the car and it doesn't slide around enough to cause any damage. Of course, I'm careful about not braking too hard.

If you are very picky about nicks and scrapes to the outside of the cabinet, then you might want to put cardboard around the four corners, and use plastic wrap as suggested above. You might also want some method to secure the dolly so that it isn't banging around in the back next to the machine. Honestly for me, that's the most likely cause of damage once it's in the vehicle.

You might also want some method to secure the dolly so that it isn't banging around in the back next to the machine. Honestly for me, that's the most likely cause of damage once it's in the vehicle.

Ummm the first thing is you are going to do break shit. It's the number one rule of pin club!

Since it is a recent model, the only tool you should need is a 5/8 wrench. Longer list for older machines in unknown state.

I use a roll of stretch wrap from Office Depot to secure the head instead of a strap.

A cheap hand truck from harbor freight is fine unless you have a lot of uneven terrain or stairs. Get the one with the small castors as it makes it handy to roll around when you need too.

Height of the machine is 32 1/2 inches so make sure it will clear your vehicle.

Blankets as needed. I usually slide on one and protect the cab from the hand truck, but that’s it.

I stack and wrap legs in the static wrap and put power cord bolts and balls in the coin box. That’s how I remember that I picked up everything.

Below is how I load and unload as one man operation. I just slide the machine up and down on the hand truck. An explorer is just barely tall enough to work. 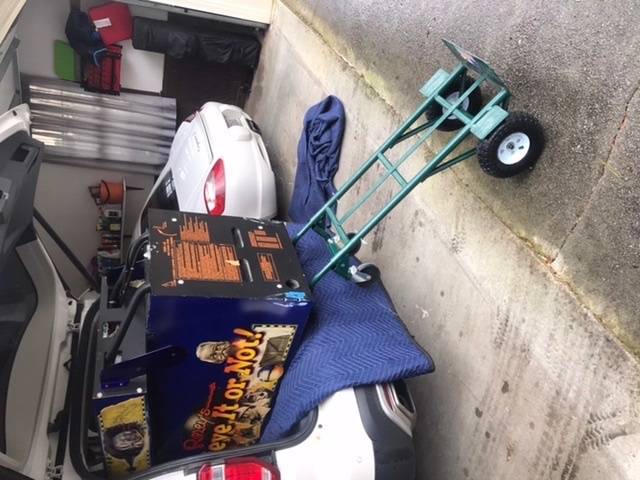 Don't forget to tie the game down in your vehicle. Even if you are a good driver. The vehicle that hits you turns the game into a 300 pound missile.

Maybe I can that slide to my routine. How does the hand truck stay in place?

You could also use a small stool to remove it from the car if you want . Pull out the game alittle when home to where you can put two of the legs on then slide the game out and rest it On the stool to put the other two legs on . Then you can carry to where you need . It’s just another little trick people use sometimes .

All I ever bring is a box cutter for removal, and a dolly. Sometimes a blanket to lay on.

Sometimes a blanket to lay on.

Surely they'd get you help after you injure yourself.