I wonder if anyone has an insight on the electronics used for the short-lived "The Pin" platform.
It is even not listed on the Stern website anymore.

Anyone got a schematics and/or manual of that thing ?

I'd like to know how many "The Pin's" were actually sold? This might just be one of the rarest games ever made. Only 1 Pinsider shows as being an owner and I never see or hear about them.

Every year more are spotted in the factory, so they keep making them. Just not for us.

Every year more are spotted in the factory, so they keep making them. Just not for us.

Yes, it is one of the big mysteries of the pinball universe. Supposedly demand is strong enough for Stern to dedicate an assembly line to them at their new facility.

However, the only owner I know of to post having one on Pinside quickly returned theirs.

Who is buying these on a regular basis? A mystery indeed

Honestly, I have been waiting patiently for more people to chime in with detailed hardware and gameplay reviews, but so far I have read nothing. Its like these are all sent to locations where pinheads are barred from entering.

Was just discussing this the other day

Never seen one, they weren't on Amazon for long, I have no idea if there were other sales channels it was sold through (I've never seen any), and there seems to be no one in the pinball community who bought it.

Maybe some weird market in a foreign country is buying them all or something..lol.

It was not made for the collector it was made for Amazon buyers.

I was in the factory and checked out the avengers version of the pin. It wasn't too bad actually.

I think Gary mentioned last year that the entire inventory was sold to a pool table company, but I don't recall their name.

I saw one at Combined Pool and Spa here in Sioux falls. It said "sold" on it but you could play it any ways. I think it was listed for $3499. I gave it a few plays.. yuck.

And so... nobody has a schematics ?

I think Gary mentioned last year that the entire inventory was sold to a pool table company, but I don't recall their name.

Heck, even the much maligned "Vacation America" has a manual and schematics available.

Ask and ye shall receive even though its over a year later. I own one and its a great machine for a small apartment.

Anyone ever find schematics and board pictures?

There was an Avengers one for sale on CL in Phoenix recently. It was a pool table type of place and the ad is gone, but might have timed out at this point.

Anyone ever locate manual or schematics?

Isn't it an early version of Spike ?

Isn't it an early version of Spike ?

Yep. I had one for about 10 days in late 2012. Returned it (via Amazon) because the drop targets malfunctioned. No way to open it up to fix.

It got me into pinball though.

Still no insight into schematics and board layout? Has anyone ever contacted Stern to see if they have any to share? They have to exist somewhere. I am picking up a non-working Transformers The Pin today and I can't find anything on the internet in the way of help to troubleshoot issues.

Still no insight into schematics and board layout? Has anyone ever contacted Stern to see if they have any to share? They have to exist somewhere. I am picking up a non-working Transformers The Pin today and I can't find anything on the internet in the way of help to troubleshoot issues.

Wow, hopefully it is a simple fix. Congrats on the find!

I got The Pin working so it plays great (bad Cat 5 cable connection from the MPU to the node board resulting in an "I/O Error" message at boot-up), but I had no GI lights. That was due to no 6 vdc at the node board (there is only one on this machine). As nearly as I can tell, it is very difficult, if not impossible, for an enthusiast to repair the boards as there are no available schematics and the components are surface-mounted. From what I can gather, the Spike system power supply transforms and rectifies 120 vac into 48 vdc which is then sent to the mpu and the node board(s) to be further transformed and regulated to the necessary dc voltages (24, 12 and 6, I believe). With my node board, the 6 vdc for the GI didn't work.

I checked Marco, Pinballlife and Stern. Nobody has the board I need (520-5321-00 Rev C). Stern said they have committed orders from distributors which I take to mean they may or may not have more made. It seems that they really want the whole "The Pin Thing" to go away. Stern also told me that they have no schematics for the node boards (Bullshot! How did they design the boards to subsequently have them produced by a third party?).

In the end, I did a hack for the GI (which is completely on one circuit) wherein I wired a PC power supply to the on/off switch, modified it to start when the a/c voltage was present, and connected the 5 vdc output to the GI circuit. I mounted and firmly attached the ps box to the wooden crossmember at the bottom center on the inside of the cabinet. If you didn't know about the hack, you wouldn't know the game isn't functioning as it should from the factory. It boots normally, the GI lights immediately and it plays great. All will be good until the node board eventually shoots craps completely after which time The Pin will be a 150 lb paperweight due to a lack of a replacement board. What a shame.

BTW, the game is actually very fun. I have had 50 or so other commercial machines, and this one certainly plays better than the early SS games and many of the late 80s games. It doesn't have any ramps or habitrails, but instead has a variety of lanes to shoot and a 3-ball multi-ball. Not a bad pin if you can pick one up for $1500 or less, with the wild assumption that you will be able to keep it running! In my opinion, it was a good idea killed by a bad retail price point, poor execution and a total lack of support.

P.S. The game can be serviced from underneath by removing six screws and a piece of hardboard to gain access. The PF doesn't lift to allow access while standing (presumably, it was to be so reliable that it would never need service?). The whole process is akin to lying underneath a car while alternatively swearing and drinking beer; and occasionally turning a wrench.

(The green painter's tape in the pics is to hold the translite in place until the on-order tempered glass is done. It was broken by the previous owner.) 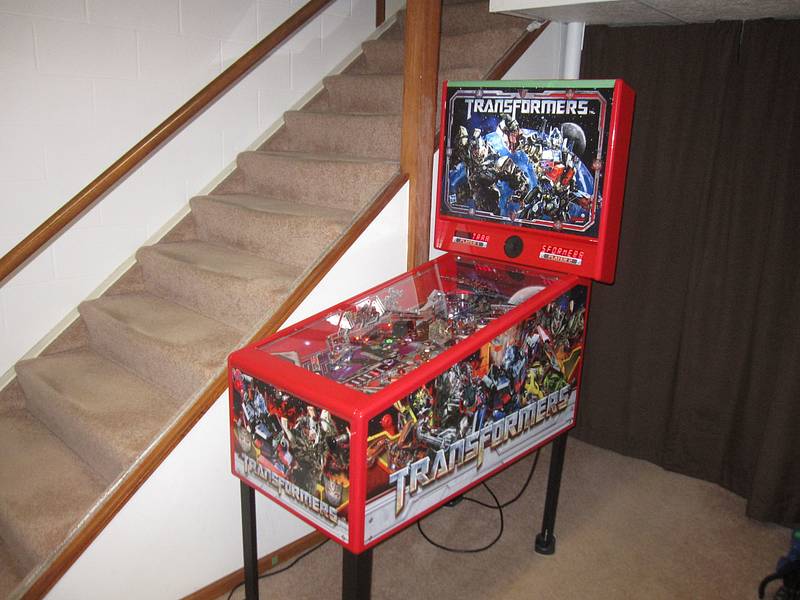 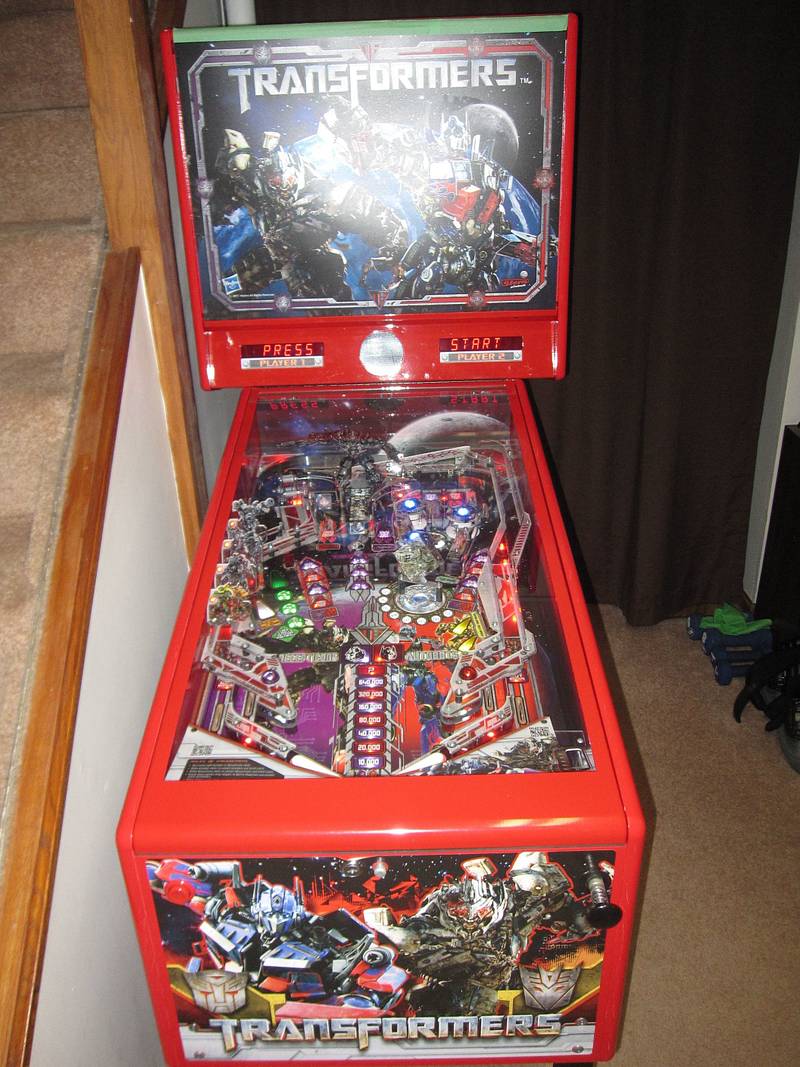 In the end, I did a hack for the GI..... The green painter's tape in the pics is to hold the translite in place until the on-order tempered glass is done. It was broken by the previous owner.

A fellow Pinsider sold me a spare node board that he had. I installed it and everything works perfectly. All hacks have been removed and the translite now has a new piece of tempered glass holding it in place. It plays great and is a fun game. Top 100? Clearly not, but still an entertaining pin and a very unique addition to a collection.

I am going to redo some of the factory lighting as there is way too much red. The center area near the pop bumpers should be purple along with the two lights on either side of Megatron. Also, Megatron would be cool with a purple spotlight to highlight it and the lower PF could use a couple of spotlights for additional illumination. A very neat bargain game (purchased used, not new!). 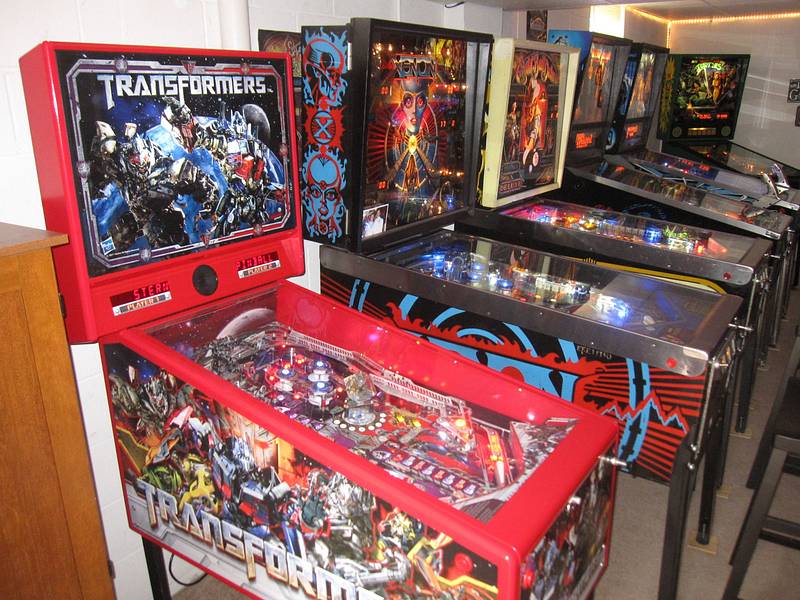 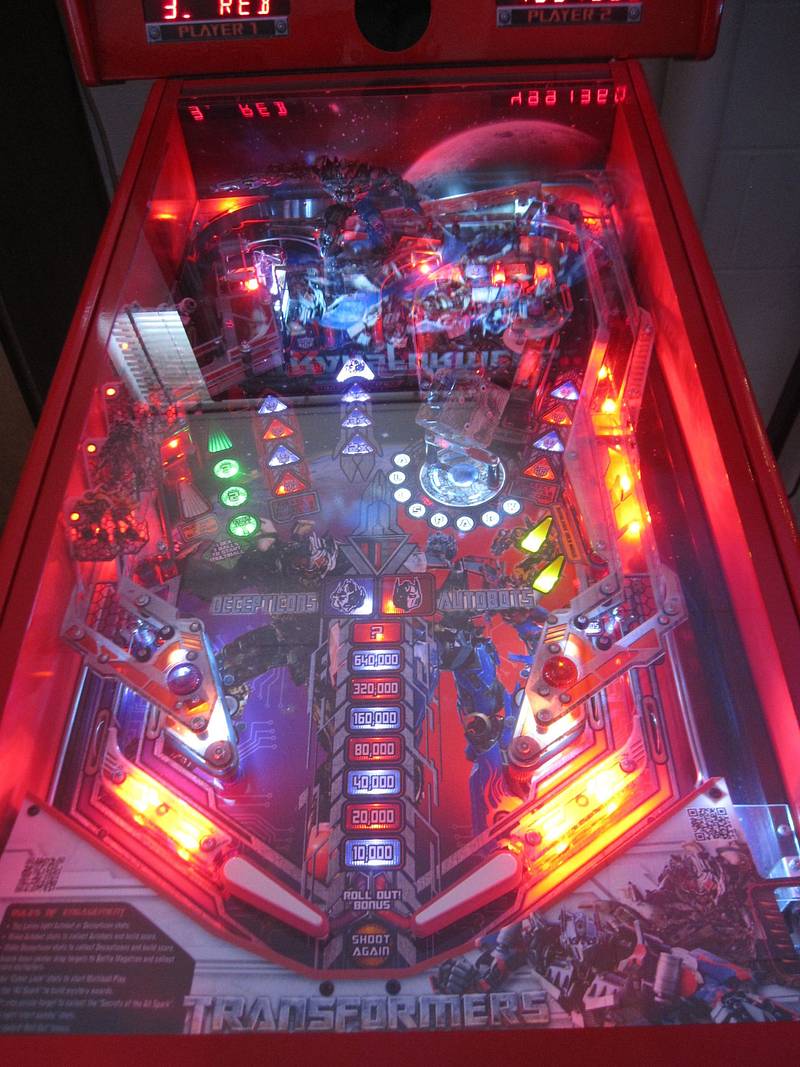 I added a cabinet speaker to my Transformers The Pin. I used an 8 inch speaker from my X-Men (I put in a woofer with a crossover in that one) and wired it to the right channel on the MPU in the backbox. I placed connectors in both the head unit (to allow for future removal) and in the cabinet (to allow for removal of the access panel for servicing). Note that the left and right channel connections on the mpu had output, but there was none for the center channel. I think a next step would be an L-pad on the back-box speaker to better balance the sound (more is needed in the cabinet). Additionally, a crossover on the 8-incher might be a nice addition to get it to really rumble.

To service these pins, you have to tip it up on its back and remove a one-piece hardboard panel to get at the underside of the playfield. I cut the panel in half to allow for easier removal and I replaced the wood screws used at the center mounting location (there is a wood crossmember in center of the cabinet) and replaced them with #6 machine screws and t-nuts. 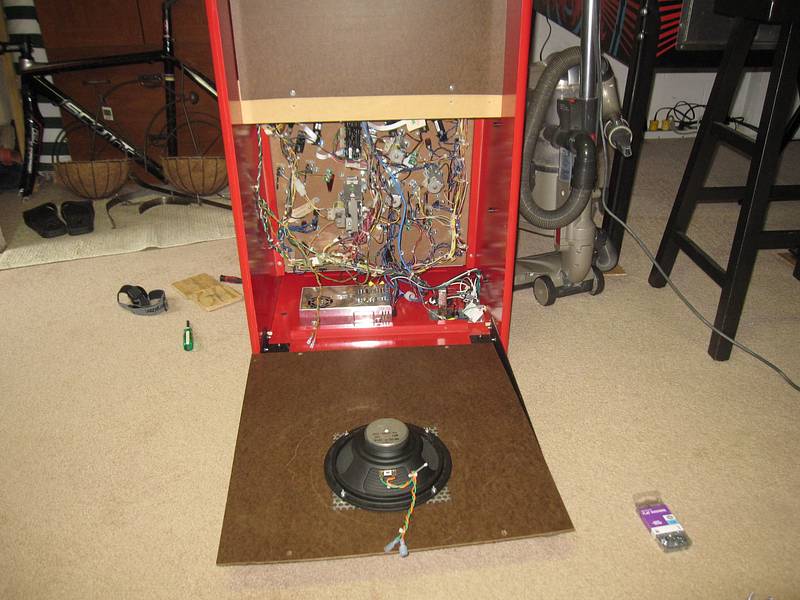 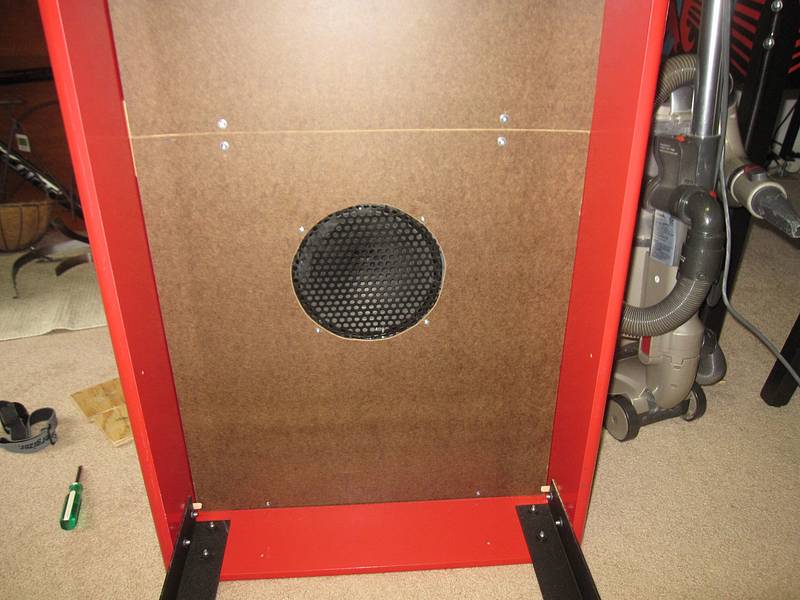 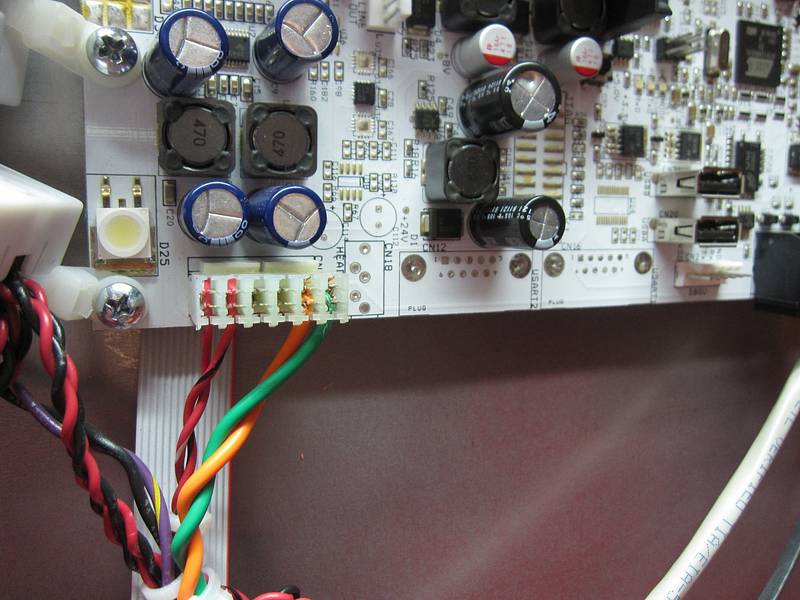 That looks really great. I sure wish Stern would commit more time and resources to these smaller home models, they really are a blast to play and have a great deal of potential.

Too bad re: the support you received from Stern, congrats on being able to get help from a fellow enthusiast! That's great.

Bump for any updates. Has anyone been able to wrangle any technical information from Stern on this machine?

Well, it has been a year and I just picked one of these up that has power, but does not come on. I have 48 v coming out of the PSU and the node board has lights on it... But that's it. Nothing makes anything light up or come on.

So, did anyone ever acquire schematics?

So, did anyone ever acquire schematics?

Not that I know of.

Your problem might be a corrupt SD card on the cpu board. You'd have to contact Stern and see if they can provide reloading of the game code.

Upon further inspection, the 5v rail is dead. So I have sent the board off to a mate who can do smd repair. I don't have the gear, eyes or steady hands...
Also, after speaking with Tech support, there are no schematics. So no one is ever going to find or get them. They went to make a run of these boards, years ago and realized that engineering files did not exist. They were just... gone.

Here buy this product that we made for a target audience with no pin maintenance exp... lets make it impossible to work on and then lets throw away any docs we might have had to help when they need it. Amazing

Here buy this product that we made for a target audience with no pin maintenance exp... lets make it impossible to work on and then lets throw away any docs we might have had to help when they need it. Amazing

Yup, that sounds like Stern's entire home pinball machine line. "Buy this and when it breaks you're shit out of luck".