The greatest single shot in pinball?

Racking up ball number 12 on Rack-A-Ball, Bowling Queen or Mibs.

Not sure if it's a Gold only thing but if you start the 1st multiball with a vault shot instead of the chair you get a callout that says "Not the Bermuda Triangle!"...

I think the jackpot is doubled too.
Second only to "It has to warm up.. so it can kill you!" in my book, and hitting the vault (or Thing) makes such a satisfying metallic sound to boot.

Yep, I love that shot! I am going to try with the glass off. I have heard "it has to warm up" which I derive way too much amusement from.

Not sure if it's a Gold only thing but if you start the 1st multiball with a vault shot instead of the chair you get a callout that says "Not the Bermuda Triangle!"...

I think the jackpot is doubled too.
Second only to "It has to warm up.. so it can kill you!" in my book, and hitting the vault (or Thing) makes such a satisfying metallic sound to boot.

Lighting the spinner and ripping it in Quicksilver.

The Hobbit - Right flipper backhand shot into the Radagast hole to start an arkenstone mode. Also, the deep lock/EB shot on Earthshaker.

Completing the valley of the demons drop targets on Paragon.

Hitting the bell in AC/DC, then having the bell swing back and smack the glass. Maybe not as satisfying as some, but always scares the crap out of people doing it

Some of my favs:

Meteor Ripping a loaded spinner.
WWCS '94 Goal shot(s), especially during the Final against Germany.
LOTR Left ramp, and Destroying the Ring.
Star Trek Vengence Multiball shots against the Vengence when it is fired back at you with malice.
Fathom Left orbit, loading the top lock.
Flight 2k spinner/maze shot.

The only TAFs I've played on, including my own, have had Gold ROMs so don't have a frame of reference. Maybe it was added by the Gold ROM then.

The choreography when killing Smaug in the Hobbit is unrivaled, but it's also wonderful to step into some Hobbit Arkenstone modes: I love the final Eagles flight of "Into the Fire" and the 3rd stage in the Cathedral of "Battle of Five Armies". Great graphics and wonderful soundtrack after hard action.
The final shot to finish the "Self Destruct" mode of the Alien pin is also very satisfying.

Anyone for Flash Gordon bonus collect during the 5x playfield multiplier? All the better if the right spinner is lit and you rip it on the way up!

Destroying the castle on MM

When I think of satisfying shots they are shots that only happen once in a handful of games. blowing up the castle is cool, but finishing the last shot in royal madness is even better.

it was already mentioned but NGG hole in one is the best for me, the fan fare is awesome.

also getting mega jackpot on rescue multiball for WOZ.... I'm not sure how satisfying it would be since I've never completed it but nothing would make me happier.

Back handing off the right flipper into Coffin Lock on BSD.

I do miss that one. Great game overall just wasn’t deep enough to stay.

The animation and sound for getting the extra ball on TOTAN, feels good.

Shooting the ball in Red’s mouth on Roadshow and she gags is a fave. I’ve owned it for 4 or 5 years and have only done it a handfull of times.

Upper right flipper shot of Fathom into the Lagoon Trap. If you’re very lucky every so often you can sideswipe the 1,2,3 drop targets and drop them all as you go..

I think it's basically impossible to name a Greatest Single Shot in pinball. Way too many good ones to narrow it down. But...

I own a Flight 2000. It is one of the games I remember best that I played as a teenager at a local arcade I spent a ton of time at. To have one in my home today is absolutely awesome.

Every time I ever get multiball on F2K, it is just such a great shot. You have to put in a good bit of Old School pinball work to get there:
*Complete 10 rollovers.
*Lock 2 balls.
*Hit 5 numbered drops in descending order, 5 to 1.

Then comes The Shot. That's what it is referred to at my house - The Shot. People chirp about it all the time:

The game is talking the whole time. You know when someone gets there. Even if you are busy on one of my other three tables, you know. And when you hear that Early 80s computerized male voice call out "ONE" to end the drop target countdown, you know there's just The Shot left. And, for a bonus, the shooter gets to rip a very lucrative spinner while making The Shot. Icing on the cake. Throw that third ball into the locking mechanism with The Shot and away goes multiball. The game even pauses for a second, just so the player can soak it in. Totally Old School.

It NEVER gets old.

Nostalgia? I suppose so, but I love it. Just tore F2K down tonight, cleaned the pf completely, dropped down 2 coats of Blitz Wax, slapped on new rubber and dropped in a new set of balls. Tomorrow (Saturday) my wife will be in Arizona visiting her Mom and the basement will be full of about a dozen loud, happy guys playing pinball. This will be the first time we're throwing down since I got my Fish Tales. We got a keg of Fruh Kolsch from Germany (almost half of the guys are professional brewers). Ordered in 2 cases of Blenheim Ginger Ale from South Carolina for mixed drinks. Picked up a few new bourbons. Ordered a six foot sub from an incredible Italian market. Rob's making giardiniera for the sub and setting up a bloody mary bar. Jerry's making a pork loin. Chris is bringing Campari. Jimmy's making hummous. Lord only knows what Lucas and Benjamin (2 German engineers) will bring.

Killing Smaug is the greatest “accomplishment” shot in all of pinball.

The best feeling shot is the main ramp on TOTAN

Rudy sleeping shot on FH. Love hearing him spit the ball out!

I believe this is Gold ROM only

Lotr ring hands down. Been said throughout but just so good

It's this one. For so many reasons. 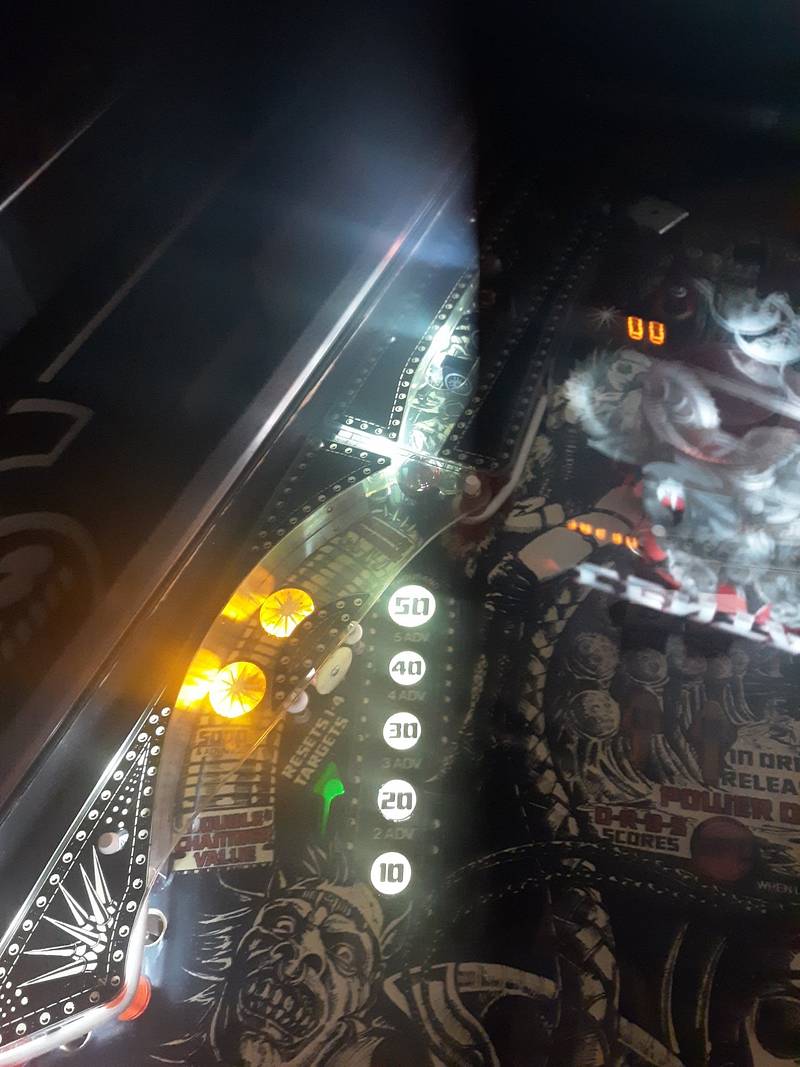 For me thats where it all started.

Do or Die shot in Iron Man for the massive points.
3 target sweep in Quicksilver.
Upper left lock on Punk.
Getting he last target needed to lock up Double Bonus on EK.
Rippin the spinner on Harlem Globetrotters when it’s at 2000 a spin.
Hitting the scoop on Tron when Portal is flashing.

The greatest *non* shot in pinball - Spin a Card when the outhole is lit for Special.