I'm working on a Bally 6803 display that has the H & J segments out on all digits. I've re-flowed the solder and confirmed it's not a cable issue, so I'm going to swap out the resistors and transistor. I'm having a bit of trouble finding an MPSA42, but Marco lists a 5A-9216 - I assume as a recommended swap. Before I do this and blow something up, I thought I would verify. I can't find much out of the web that shows these are equivalent. Can anyone confirm I can swap these? Looking at the specs on both, I think I am fine, but I'm far from an expert in this field. 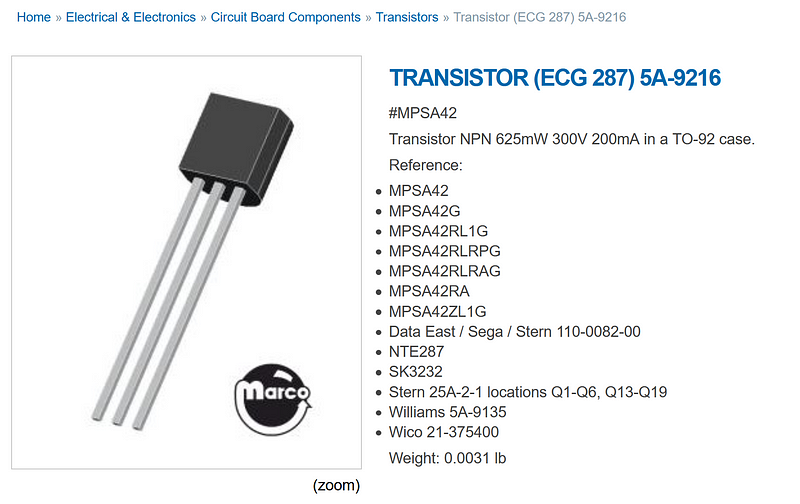 Just order MPSA42 from great plains although I am sure the Marco one is fine too.
https://www.greatplainselectronics.com/proddetail.asp?prod=MPSA42

Just order MPSA42 from great plains although I am sure the Marco one is fine too.
https://www.greatplainselectronics.com/proddetail.asp?prod=MPSA42

Oh man, I could have sworn I checked there. Thank you!

KSP42 is an equivalent that was made by Fairchild Semiconductor.

Fortunately, there are still a couple other manufacturers of these left.

Swap a suspect MPSA42 with a working one to see if the fault follows the transistor or the display segment.

Thanks all for the information and education. Will place an order and see what happens.

Just closing the loop here. So, I replaced all 3 resistors and the transistor controlling H and J, and no luck. However, swapping out the U1 chip did the trick and I am back in business with a fully operational display.

Thanks for the guidance.