TECH: Ball not flowing smoothly from inlane to flipper ...

I've noticed on some games I've owned that when the ball goes from the inlane to the flipper, it sort of hops over the space instead of flowing smoothly on to the flipper. This seems to be most prevalent on older games such as System 11s. It is currently happening on my Pinbot, and I seem to recall the same thing with my SoF. Is this just something that is common to all games from this era, or does it mean that something needs to be adjusted? Short of physically moving the ball guide closer to the flipper, I can't think of any way to fix the issue.

making flipper adjustments might help. also you can try loosening the screws on the inlane guide to help even it out. i had to bend the wire on my taxi's inlanes to get rid of bouncing.

But how can one adjust the flipper height? It has to go into the bushing, and there isn't any play with where the bushing can be mounted.

Cliffy to the rescue.

First I would try lossenening the ball guide and moving it a little and re-tightening.
VERY annoying this problem is.

You can try and adjust the inline guide upwards, just loosen, push up and tighten.

I believe cliffy was making some altered inlane guides for certain games too..check with him..

Very interesting. I had no idea Cliffy was working on this.

Loosen the bolts to the inlane guides, reposition then tighten. Also loosen the 8 screws holding the flipper mounting base from the playfield, reposition and tighten.

I need to adjust my BoP. I get a little bounce on my right flipper which drives me batty.

I noticed (on WPC95 games) that if I adjusted the flipper with the flipper rubber on..using the lineup hole..I would get the bounce. Backing the flipper off ever so slightly fixed the problem

But how can one adjust the flipper height? It has to go into the bushing, and there isn't any play with where the bushing can be mounted.

By 'up' I meant the position of the flipper if the flipper button was pushed.
I noticed (on WPC95 games) that if I adjusted the flipper with the flipper rubber on..using the lineup hole..I would get the bounce. Backing the flipper off ever so slightly fixed the problem

The holes are incorrect on many playfields.

I noticed (on WPC95 games) that if I adjusted the flipper with the flipper rubber on..using the lineup hole..I would get the bounce.

Try with the rubber off next time. Pinbot is a perfect example of this. If you look at the art around the flippers and where the holes are located, rubber off is the way to go.

It is currently happening on my Pinbot, and I seem to recall the same thing with my SoF.

Before you try anything with the return lanes, make sure the bats are positioned properly. Toothpick straight up in hole, bat resting against toothpick. No rubber.

The holes are incorrect on many playfields.

In my experience, it's been quite the opposite. I've found post and lane guide holes slightly out of position, but never the flipper adjustment holes. Got any pics?

The last times I ran into this, specifically with the thin wire type of guide rails, I found this: When watching the ball roll down the guide, the bounce was actually happening at the end of the rail and not at the flipper bat. In this case the horizontal wire of the guide was too high, and the ball was hitting the vertical part of the wire right before the bat. Pushing the lane guide down into the playfield so that the midpoint of the ball is riding higher on the edge of the horizontal rail (in othwords, just a little less than half the height of the ball) will solve the problem. Sometimes the horizontal part of the rail needs to be bent inwards toward the lane as well. Combine that with aligning the leading edge of your flipper bat straight with the lane guide will make a perfect flow.

On Pinbot it may be that the lane guides are worn. Inspect them and loosen them to reposition them, then align the leading edge of the flipper bat with the guide.

The Time Machine I have has lane guides so badly beaten by balls over the years, that this happens to me, too... I'll probably make new ones soon, but loosening, shoving, and re-tightening did make some improvement....

Had the same issue on many system 11s. It is usually from guide wear. I've bought Cliffy replacements, which work well. I have also slotted the holes in my guides before with a chainsaw sharpening file. It's a 3/16 " round file that I put inside existing hole and slot hole, so when reinstalled it can be positioned further forward eliminating bounce.

I'm having this issue on a Taxi I just picked up. The left inlane flows smoothly, but the right has the hop. It's clear as day when looking at it too: the wire lane guide fits just slightly under the flipper rubber, causing a bounce that'll actually shoot the ball to the opposite flipper!

Is there a technique for bending wire inlane guides?

Could someone please send me cliffy's email as I would like to order some protectors and lane guides but when i click on the email tab it comes up "Could not perform this operation properly bullshit". Or even a place that sells them, I'm going to look. Thanks


Quoted from tomdotcom:You can try and adjust the inline guide upwards, just loosen, push up and tighten.
I believe cliffy was making some altered inlane guides for certain games too..check with him..
http://www.passionforpinball.com/wip.htm

I'm glad you resurrected this old thread of mine, as it made me realize that I never followed up with how I solved the problem. It turned out that the original lane guides on my Pinbot were indeed worn from the balls smashing into them over the years. I replaced both of them with new ones from Cliffy, and no more hop.

I still own the game, by the way, and it's still one of my favorites.

I'm giving advice as to what work for me please be careful when doing this because you don't want to crack any of your Plastics.

At first I thought about putting plastic in Lanes in the oven for about 15 minutes at 275 to soften them up and bend them back into shape but then I thought what if I used the same method I used when I fixed my Hocus Pocus machine when I noticed one of the posts were loose. Why not use a shim? In this project I remove all four screws from the the end Lane and switched left with right so that new plastic Square on either side then in the first hole closest to the flipper I put a flat toothpick at 6 position perfectly vertical with approximately one-quarter in poking up from the hole as a shim when I inserted the screw at the 12 position so that the shim would keep the screw forward. As I was screwing the screws down to the in Lane I kept forward pressure on. I used firm pressure but careful not to break anything. I tightened all screws down and ran the ball down and finally it has been repaired!! Now I can get my loops flowing as it should!. I hope this helps anyone else who had the same problem because without a smoothinlane/flipper transition the game sucks. Good luck to you all here are some photographs I took along the way 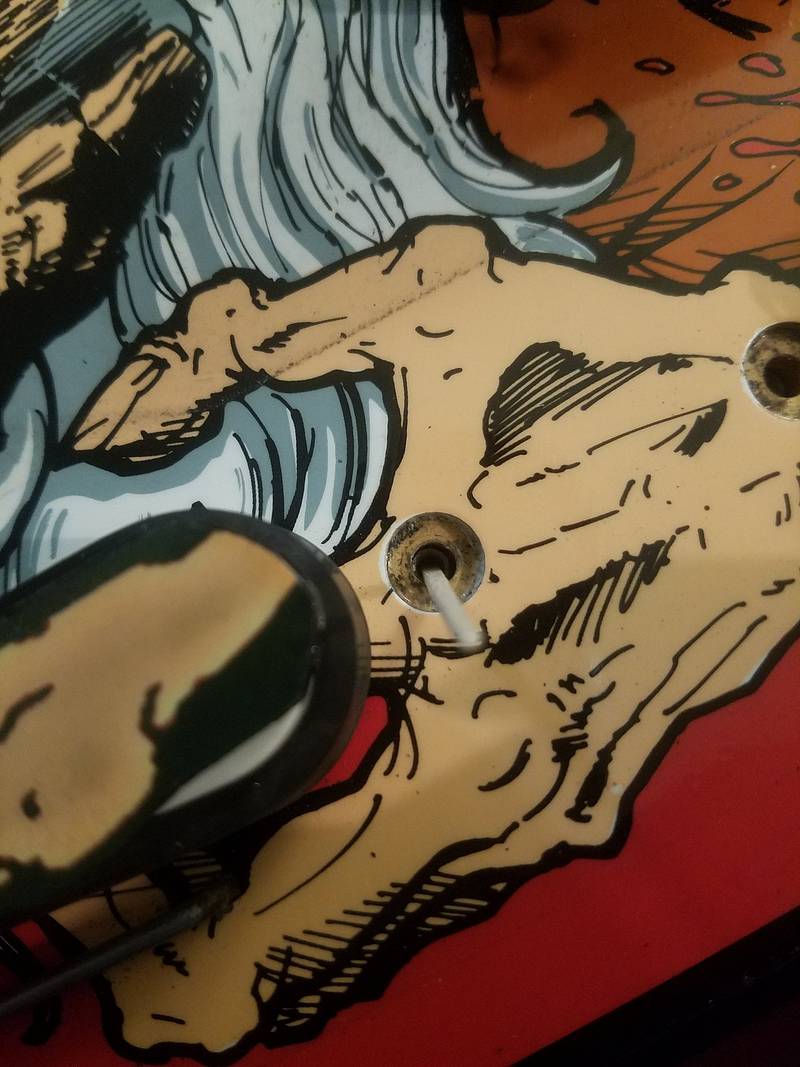 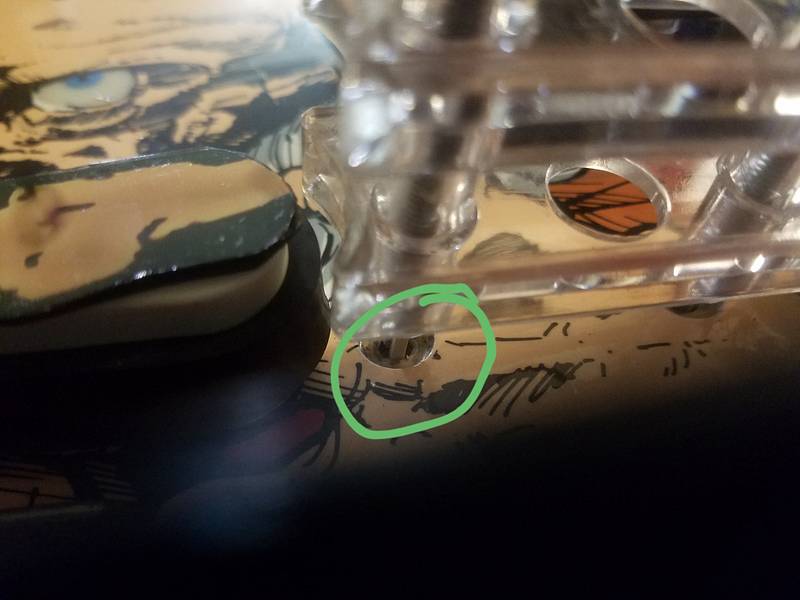