[Resolved] Switches: How on earth did I mess this up?

Greetings, all! This is a newbie question for a Stern Star Trek Pro...

So, I bought this a few weeks ago, and on arrival, switches 11 and 21 were out of service. (11 was center drop-target, 21 was R ball trough.) Each had an IDC connector that had a wire that had unseated and was loose. 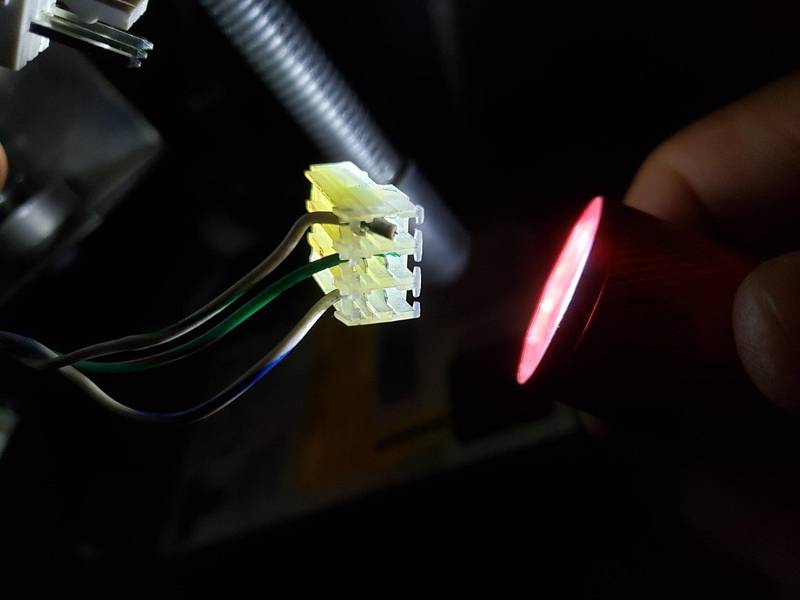 On the sage advice of others here, I bought a wire-insertion tool, which did the trick for switch 11. For switch 21, there was a piece of old wire stuck in the connector, so I took a new IDC connector, inserted the white/green (loose) wire in the same position (triple-checked), snipped the middle green/red wire from the old connector and inserted it into the new, and then followed suit with the final white/blue wire.

Switch 21 now back in service, but now switch 22 is out of service. 22 is ball jam switch.

My first thought was that I didn't insert wires well enough, but I checked, and I'm pretty sure I did...? 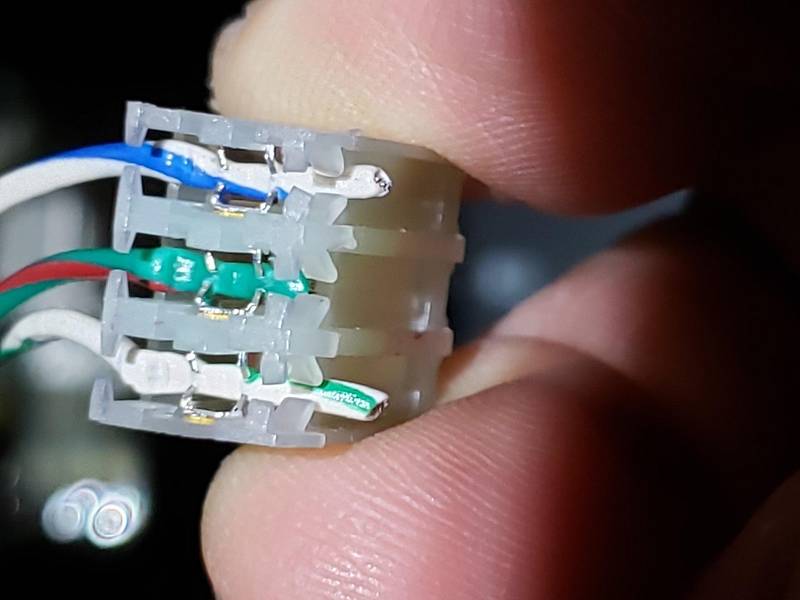 Then I thought that, perhaps, I switched the orders of the wires, so instead of 21 being detected as dead, 22 is instead... But I did a pinball trough test, and switch 21 IS detecting the ball in first position. 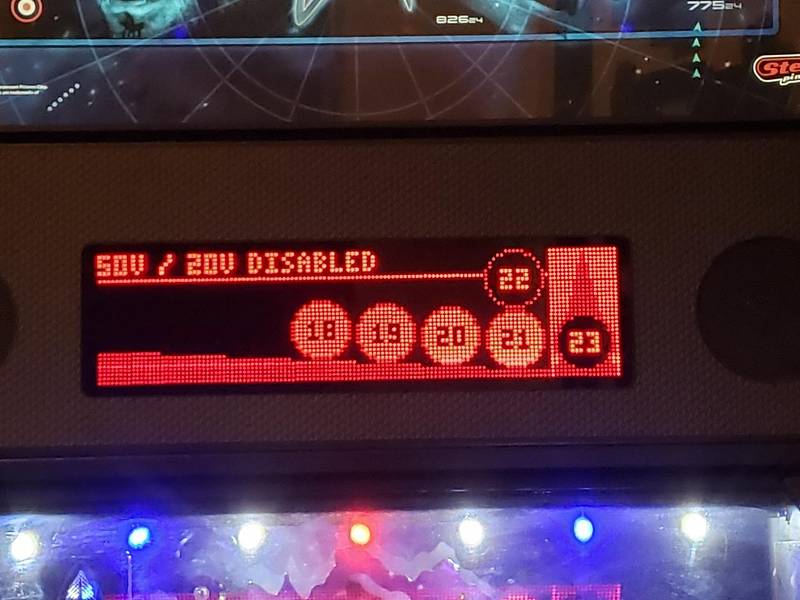 . If I had switched the wires, and the trough test thinks 22 is actually 21, why would the switch condition show a pinball in position one (result for 21) if there's no ball jam (condition for 22)? (Am I thinking this through correctly?)

The switch test shows that the wires for 21 are white/green and green/red. 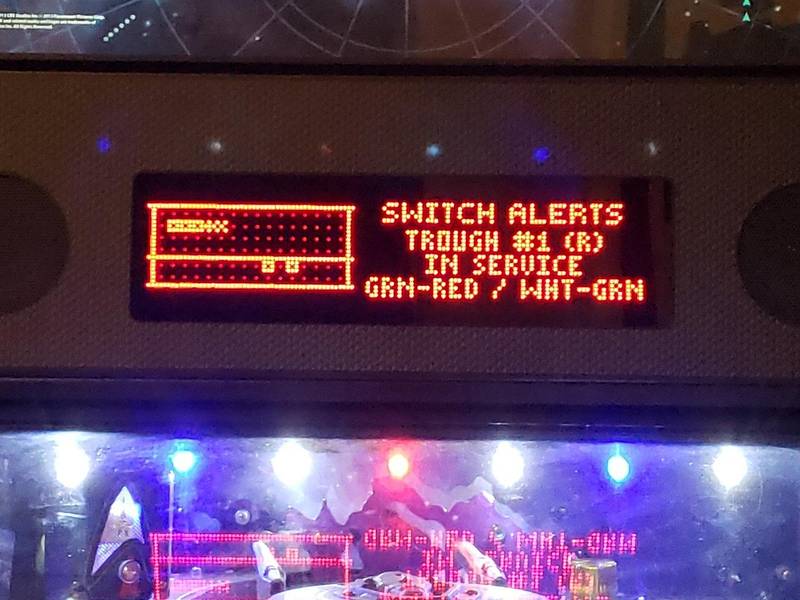 Switch 22 shows as white/blue and green/red, so I'm pretty sure these are all to the same connector. 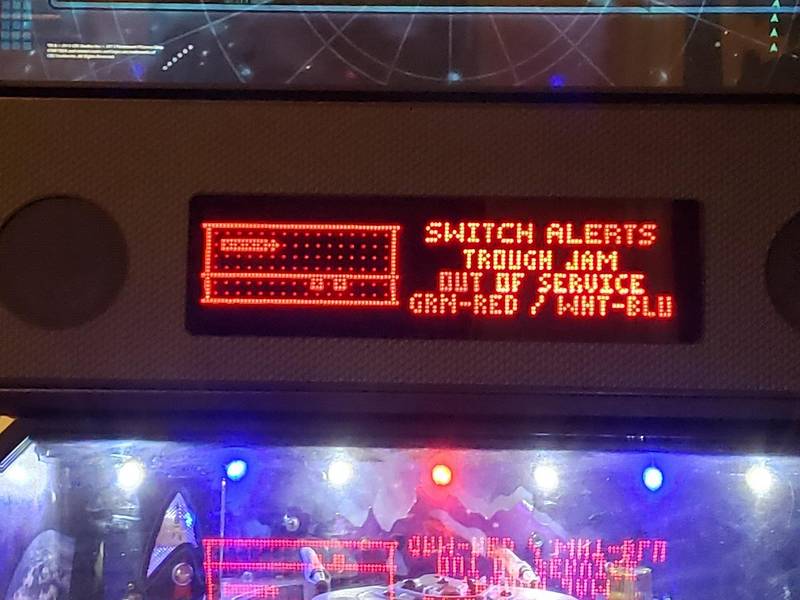 The IDC leads to a male/male adapter. The white/blue IDC 22 wire carries over into the white/purple wire which is seated nicely... 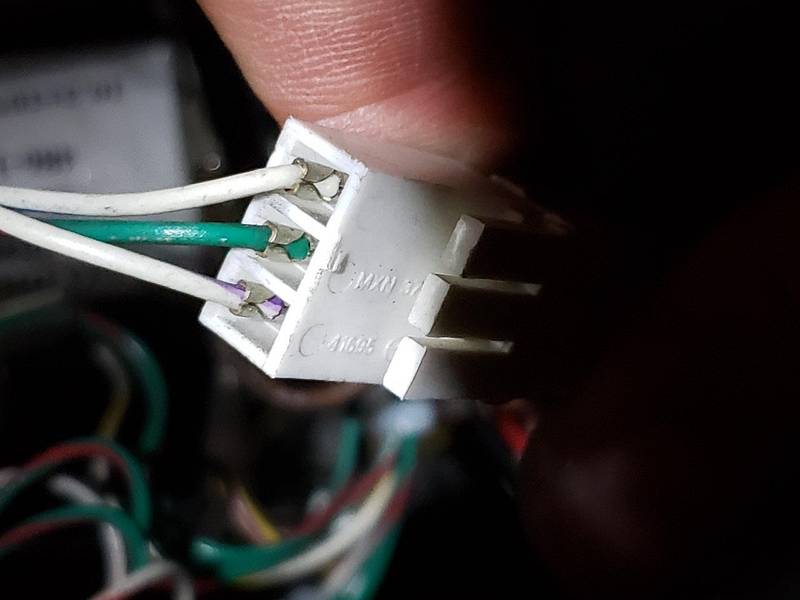 ...and leads to an opto attached to the ball trough. 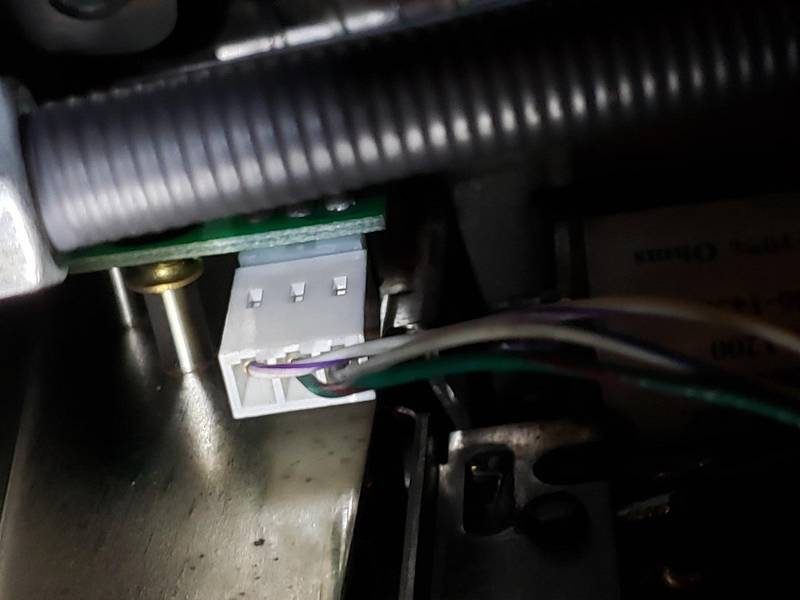 Did I do something wrong in repairing switch 21 that led to a malfunction in switch 22? It wasn't reading as out-of-service until this happened...

Just to make things easier, when you add pictures to your post, you can hover over the thumbnails and you'll see a + show up. This will insert the picture to that location in your post. That way you can arrange your text and images so it all makes more sense. Any images that you don't reference this way will be appended to the end of your post.

Is it just me or did you reverse the wires between pictures 1 and 2? Picture 1 seems to have WHT-GRN / GRN-RED / WHT-BLU and Picture 2 seems to be WHT-BLU / GRN-RED / WHT-GRN, but it's hard to tell.

yaksplat! I had no idea, cheers!

Is it just me or did you reverse the wires between pictures 1 and 2? Picture 1 seems to have WHT-GRN / GRN-RED / WHT-BLU and Picture 2 seems to be WHT-BLU / GRN-RED / WHT-GRN, but it's hard to tell.

GoodOmens, I'll check again tonight... Part of the confusion was that I had inserted the wires from "above" the connector (inexperience), if you can describe the wires in the original connector as being inserted from "below." Will follow up, however, thx!

Thanks, yaksplat! I had no idea, cheers!

Yeah, it took me a while to find that it could be done. Almost impossible on a phone though.
You can also edit your post, and redo the image logic. I just get really lost when scrolling a lot up and down... what number pic is this?

Post fixed, thanks again yaksplat! But after I took additional pictures to show that the wire orientation hadn't changed, I reconnected everything, turned it back on, and the service alert was gone... Looks like it just... kind of resolved? Maybe I didn't seat the connector properly before? In either case, it looks like all my switches are working once again... Thanks again for your patience!

Or.... you rearranged your pics and everything just made sense

Sometimes things just work out. The pins may have been a tad dirty.