Swink's snackbar mod (in all its versions) has been *the* mod the get for Creech for a good while now. When I received mine, I was really impressed with the craftmanship and attention to detail. More importantly, it just looks great - really adding a swag of character to a game that's already filled with it.

A little project that I've been thinking about for a while now is a lighting mod for the snackbar, some kind of RGB colour changing for the 'neon' strip, and a way to animate the letters of s-n-a-c-k-b-a-r so that it looks and behaves a bit more like a vintage neon sign.

Over the last few days I've had the chance to work on this project a bit, and have made some good progress.

* Arduino microcontroller
* Powered by the snackbar insert, so plug n play with the existing snackbar lighting
* Neon strip lighting colours controllable via DIP switch (7 colours), single or multiple colour mixing
* Snackbar wording lighting colour (7 colours) controllable via DIP switch
* Two animation patterns available for both strips, selectable via DIP
* A guarantee that the ugly white PCB you see below will never *ever* be used by me (ever) again. Unless I'm working on a boyz II men mod. I sweaar!

I always try to make things as easy to install as possible (and reversable) but there's a few considerations when powering from the insert. During attract mod, the insert flashes on/off every second or so, which doesn't play nicely with the arduino's 2s boot time. After doing a bit of research on that today I think i can skirt around that by using the optiboot boot loader, which drastically reduces boot times to something like 60ms. Yet to test that, so tba.

The other issue is that even when the snackbar insert is on, it flashes, which means that the voltage won't be constant. It behaves similar to an unsmoothed rectified voltage. I haven't scoped it, but it's approximately every 100ms . Obviously that isn't going to work with the power section I had planned, but as per how you would smooth a rectified input, adding a 5600uf smoothing capacitor to the power input resolved it. 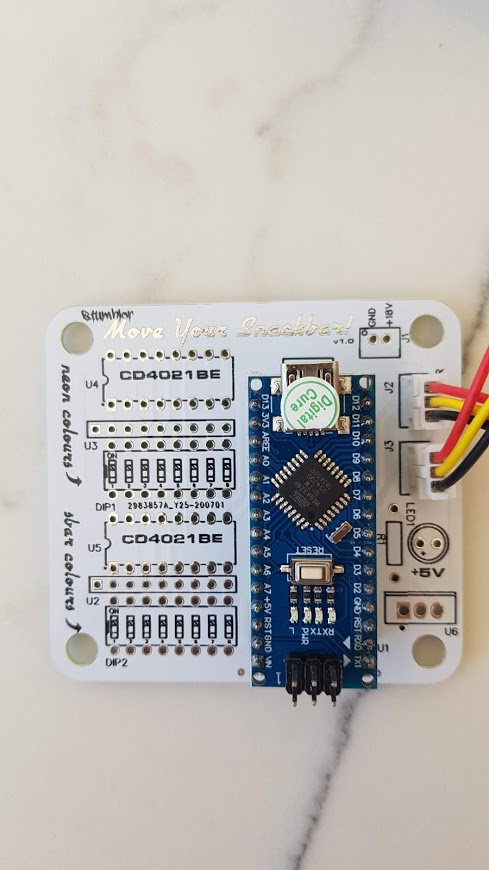 Nice! Do you have the MikeD mod?

That finishes it right off

The move your snackbar (modception) mod gets a mention on the pinball show podcast ep 24. Thanks Zach & Dennis!! Humbled.

New rev of the board getting delivered next week. Will open the list to UK first then will announce here a few weeks after that. More details soon.

Thanks to everyone for all the interest and support.

you took the signage to a new level - looks awesome...

New revision with correct signage (thanks

swinks!) and the new smoothing cap. 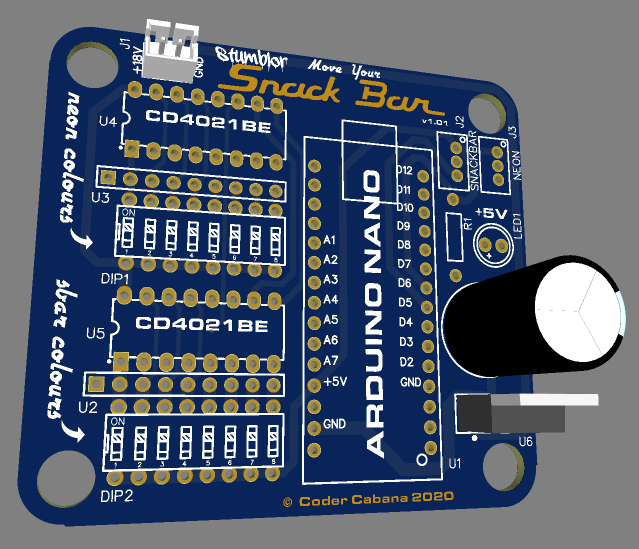 Starting a list for chaps outside the UK? I’m in!

Starting a list for chaps outside the UK? I’m in!

Great, thanks for the support!

Awesome mod for an awesome mod!!

Well done - looking forward to the list opening up

Nice one, all added to the OS list. Big thanks!

I'd be interested in one of those snack bar lighting mods

No probs - all added. Thanks very much everyone, great to get so much interest and support.

Looks like I'm going to need to put another pcb order through!

Can I throw my name into the list? This is awesome, excellent work and thank you for sharing with the community!

Sure thing, and thanks. Added.

I’ll take one as well

Looks like a list is filling up! The potential is large; one per Jady SnackBar mod, that's alot!

Nice one, thanks for the support - added.

Looks like a list is filling up! The potential is large; one per Jady SnackBar mod, that's alot!

heck, I sold my creech recently but keeping the very very last production mod for my display cabinet which will have this mod in it - it looks very cool

I apologize if I missed it, but what’s the price for this? I’m interested though, as I’m on Swinks list already, so please add me here as well.

No you didn't miss it - I was going to post something a bit more formal once the final testing round had been completed.

Delivered to to the UK, the cost is looking like it is going to be £70.

Delivery to the US is around £20 per board. So, in USD the cost is looking like $119 delivered.

For other countries (we have some on the list in Canada, France, and Australia) assume around £20 delivery but we can work out on a case by case.

Nice one. Added, and thanks for the support.

No you didn't miss it - I was going to post something a bit more formal once the final testing round had been completed.
Delivered to to the UK, the cost is looking like it is going to be £70.
Delivery to the US is around £20 per board. So, in USD the cost is looking like $119 delivered.
For other countries (we have some on the list in Canada, France, and Australia) assume around £20 delivery but we can work out on a case by case.
Also, added you to the list Many thanks!

Awesome, thanks for confirming the price as well as adding me to the list.

Add me to the US list please.
Looks great.

No worries guys, both added, and many thanks.

Great stuff - and thanks. Added.

Final revision is getting built this week, will post some board assembly pictures. The first 5 or so due to go out to people in the UK and then the overseas list will start getting fulfilled a few weeks. Currently have 26 people total across both lists which is far more than I expected. Huge thanks to everyone for all the support.

I chimed in early in for the snack mod on this thread.
Please confirm I’m on your list.

Hi Matt - yep all good mate I have you down.

There was one final revision I needed to do to the board so a new batch en route. I will hopefully start building the final board and getting these out to UK members ion the next week or so.

Been quiet here for five days. Any news to share?

Sure thing - added - thanks for the support!

Been quiet here for five days. Any news to share?

The latest revision of the boards arrived a week ago and had some component sizing issues, so had to make a couple of alterations. I expect this new batch boards to arrive next week hopefully, which will mean I can start fulfilling the UK list very soon after that, following by all the US and overseas people who have shown interest. So, probably still a few weeks away. Apologies for the holdup but just want to make sure that everything is right before I start sending stuff over the pond.

Final revision of the board is all ready to go, getting sent out to beta testers in the UK in the next few days. Still some final work to do on the code to introduce another (dip switch selectable) pattern to the s-n-a-c-k-b-a-r lights, most likely all lit up with random letters flickering on/off like a slightly broken neon sign - however I'm up for other suggestions if anyone has any brilliant ideas!

Sure thing, added, and thanks for the support. 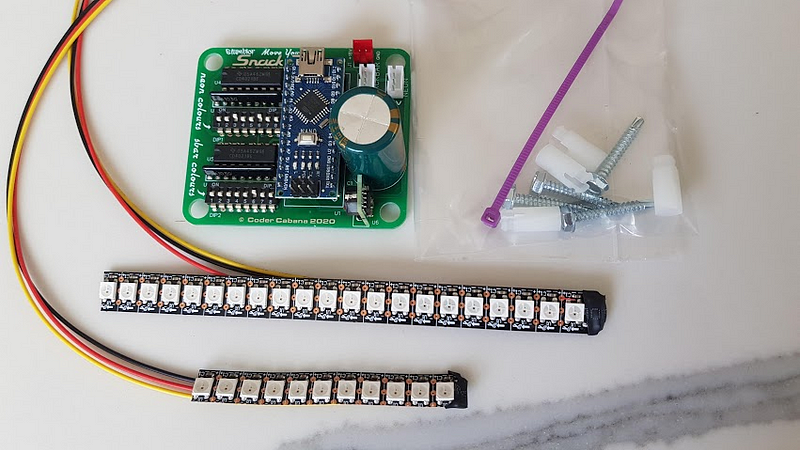 Wood Dale, IL
inhomearcades
$ 179.95
Electronics
RocketCPU WPC89
PinSound
Electronics
$ 1,059.00
Flipper Parts
Creature from the black Lagoon playfield
Mircoplayfields
Flipper parts
Next12345
There are 208 posts in this topic. You are on page 1 of 5.