One of the areas that I thought could use some improvement on my Star Trek LE was the Warp Ramp LED. I finished this mod tonight and detailed the event on my Blog @
Pinball-Mods.com. Specifically; I always thought the two SMD red LED didn’t quite fit where it was placed in the machine. Here's a photo of the install which I borrowed from Kawydud in this thread: 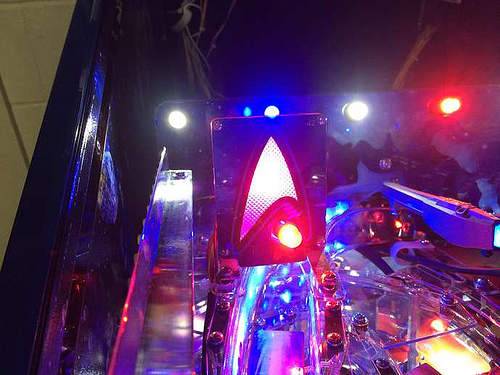 The plan was to “replace” the LED round lens with a laser cut lense which duplicated the artwork on the insignia’s plastic. To this I disassembled the plastic by removing the four screws… and took the plastic to my HP scanner where I scanned the art into my computer. Then using Corel Draw, I traced the Red Arrow from the plastic art. I recreated the arrow using red; then added the black border around the plastic to block light and give a round area to mount the new LED. Once I had the recreated arrow; I broke it into two laser cut pieces. One would be cut out of the matte/diffused Red acrylic which was used on the Stern Star Trek Pop Undercaps. The second would be cut out of 1/8″ opaque black acrylic – this piece serving as an outline for the red piece and support from the LED.

I took these files to Techshop.ws where I laser cut several of each piece for experimentation later at home. Once the laser cutting was complete; I used the black cad files to laser etch some 1/4″ plywood to act as an assembling aid/surface. When I got home; I used the plywood and some wooden toothpicks to clamp the two pieces together: 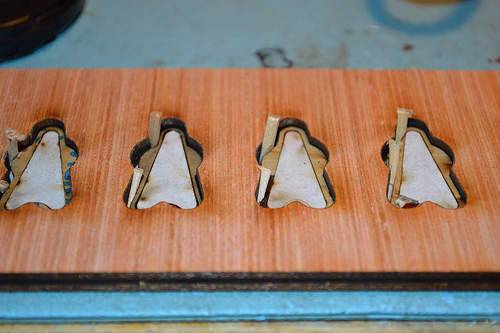 I then cut the round lens off the original LED using a new XACTO knife and then using some two part 5minute epoxy; I glued the lamp to the new lense: 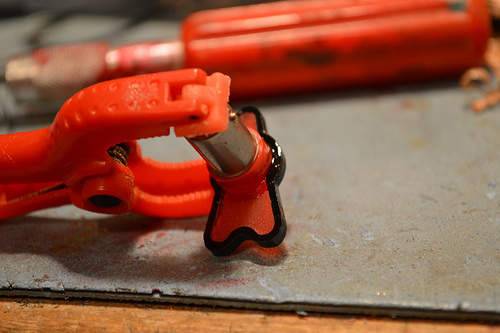 I allowed the epoxy to cure for about an hour. I then reinstalled the plastics and the new LED assembly: 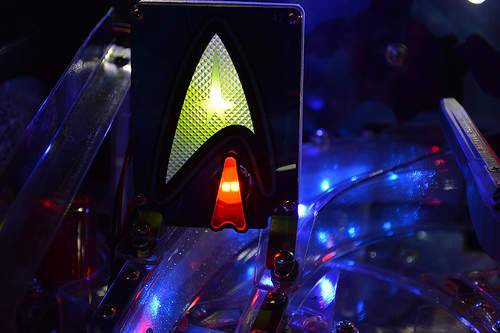 16346766618_4ae1b6028b[1].jpg
I’m really quite happy with the way this turned out. It defiantly spruces up the warp assembly. IF I had any critism on this... I wish the Matte Acrylic would have done a better job of diffusing the light... but overall; I think it's much better than the original bulb.

Great idea! I think it looks much better than just the bulb. Good job

Mine didn't bother me til I saw this, I would be in for one.

Limited units in-stock now at:
http://pinball-mods.com/oscom/product_info.php?products_id=36
I'll continue to assemble and add stock over the weekend.

Chris - yours shipped today via FC usmail. Thanks!

These went out of stock today... but I've assembled a few more. As I stated; I'll be periodically adding new stock as I assemble them.

Dan and Mark... Your LEDS are at the post office

https://pinside.com/pinball/forum/topic/for-sale-rest-in-peace-nimoy-sale
10% discount with a matching 10% donation in honor of #LeonardNimoy to the COPD Foundation.

Very nicely made and packaged. The socket in my game appears to be 90 degrees off. Is there an easy way to rotate the socket or the led shield?

To install this LED in the proper orientation carefully use the arrow to twist the #44 lamp base using a counter-clockwise direction (opposite of the clockwise twist to install the lamp). Twist the rotate-able lamp base using this method until the LED's arrow lines up with the art of the warp ramp plastic.

just saw this, and just ordered. Was hoping someone would do something like this.