You're currently viewing posts by Pinsider liorillusion.
Click here to go back to viewing the entire thread.

Doesn't matter if they are different nor hand drawn, you would still be selling artwork based on a copyright protected property.
May not get caught, but it's not legal. The mod community does it all the, but it doesn't make it right nor legal.

i must agree with this guy. he his totally right! im in this show business and movies for long years and i respect copyright. i never made a mod with trademark symbol or something like that and im not going to copy or sale any license stuff. im sorry to poop the party but no there is not remake and no vault. and again im just the designer that doing this project for someone and also for my machine. about the decals, my cabinet was with huge damage on the art and i decide to make art for it because i didn't like the original. im not going to sell the design or the decals not only because they are license and also because i want this machine special and only my close friends have this decals and i share with them the design. the sculpts are without copyright or trademark and also the new toys so no the lawyers cant shut me down for my own creation thats not need license. and again im just the designer and not the seller of this stuff. if you check my mods that i made you will not find a lot of mods for stern machine because for stern machines im making only custom made works for clients. so a company will sell my mods and toys for lord of the rings pinball and if they will get license for the cabinet decals (in new design) and on the playfield that im working on they are welcome to sell it but its really not up to me

i respect stern and i respect the movie producer and im doing all because i love this hobby and your support and love worth each minute i spent on this things!

ZMeny and twip will post more info about it very soon and if you want to see the progress you are welcome to check my instagram. https://www.instagram.com/lior_theartofpinball/

thank you guys and i promise to keep you update with the progress!

I like the coloring and general composition of yours better (I never realized how GREEN the playfield art was through the whole thing), but the party montage is just wrong. Frodo is the central character in the quest to destroy the ring, not Gandalf (much as I like Gandalf). I also don't like characters that are now missing in that montage.

thanks for the feedback. i will be happy to get more

they are not missing they will be there but i need to draw them by hand as a lot more other stuff. you see now maybe just 20% of the playfield art. also all plastic sets and toys going to be changed and the character will be there also.

and yes some of lotr playfield are super green (like mine) but there is few who is yellow.

What a bad comparison.
couldn't you use a better one that looks more as in real.
The original isn't that bad.
I think its one of Stern best looking machines ever.[quoted image][quoted image]

do not forget there is 2 versions of this playfield. they also made green one you can check in lotr member group
and here
https://pinside.com/pinball/forum/topic/lotr-playfield-looks-a-bit-green 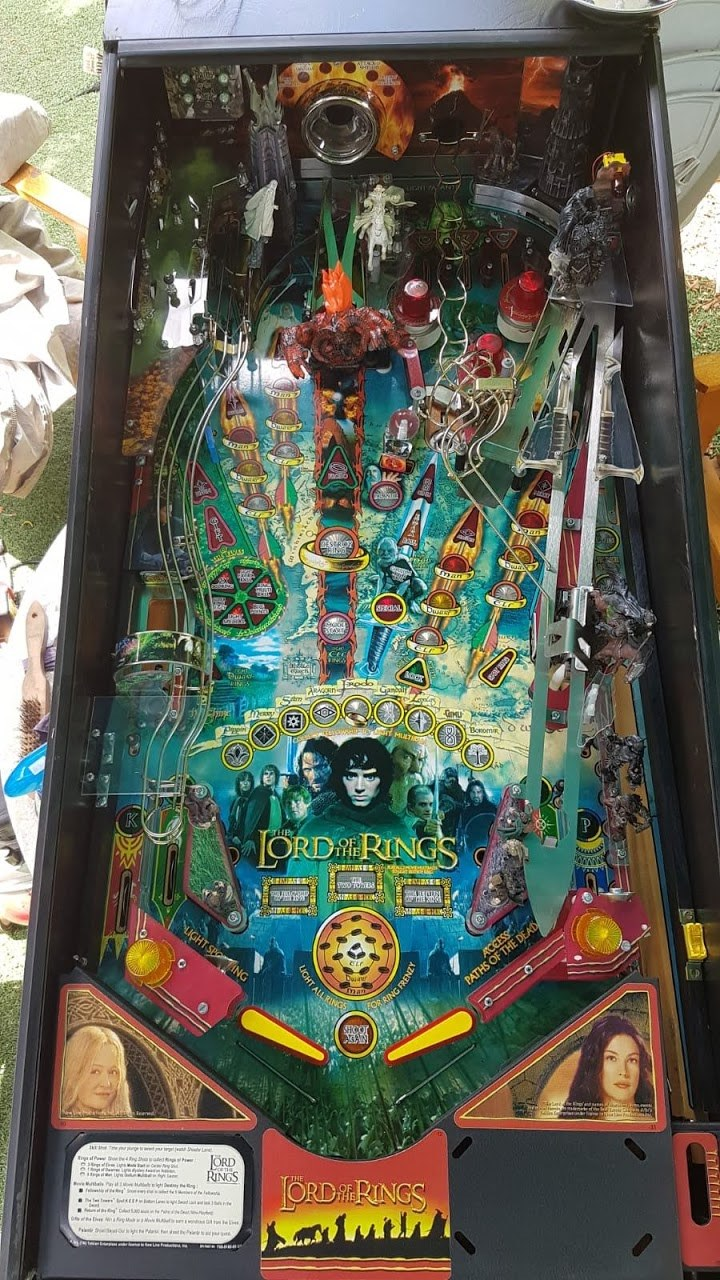 Yep yours is definitely more greenish blue then mine as well, here is a shot of mine right now as I’m working on the POTD mod.
If memory serves me right I think there were something like 4 variants of the LOTR playfield colors through their run.[quoted image]

your machine looks great! i wish mine was looking like that. if i have another machine that i want to make new design for it is indiana jones the pinball adventure

You're currently viewing posts by Pinsider liorillusion.
Click here to go back to viewing the entire thread.