You're currently viewing posts by Pinsider pinrock.
Click here to go back to viewing the entire thread.

I have a Medieval Madness pin and really enjoy playing it.

If MM came out now everybody would say it sucks fucking ass.
Yeah it has a decent art package, but the theme?! THey wouldn't pony up for a REAL Monty Python game so we get this Premier-style knockoff?
And the code?!?! WHat did they spend, like 2 weeks on it? Where's the depth? Some Munsters-level shit there.
Also the voices are dumb. Why is there a valley girl? What's with all the dumb dad jokes?
They must think we are stupid! And they hate us! PINBALL FUCKING SUCKS!

I'm curious what everyone would think if Stern decided each LE was to be $12,800 delivered, each Premium was to be $9800 delivered, and each Pro $7000 delivered. They could then add a few more things to compete with JJP on the mechs/bling department. Would we all be willing to pay that multiple times a year like we do now? That's always the question I ponder. I now get a couple LE's a year, but if the price were north of 10k it'd be a different mental hurdle to climb and I probably wouldn't end up with quite so many. Food for thought anyways. For now I'm glad they are south of that 10k mark and am pretty pleased with what is offered.

Very good point, when I tried to order a GNR CE (missed out), it was $12,800 shipped, versus the $9200 for the LZ LE pin I ordered. That is a cool 39% more, which I’ll admit you can see in the final product. However, for me the most important thing by far is the total experience, with game play absolutely being the most important. If I don’t enjoy the game play, everything else is a moot point. Don’t get me wrong, for a Led Zeppelin LE on par with Guns and Roses (21songs, more bling/toys) I would have paid $12,800, just pointing out the obvious that the LZ LE is much less expensive.

Until I play both I won’t know which plays best, but I do know I enjoy Led Zeppelin music way more than Guns and Roses. (I sold my sweet Metallica LE pin because no matter how much I tried I could not enjoy their music). It’s all good though, we’re talking’ pinball!

Get the LZ premium plus topper. You are going to love it.

Number 81 is in the house! Having fun playing it on this rainy day! 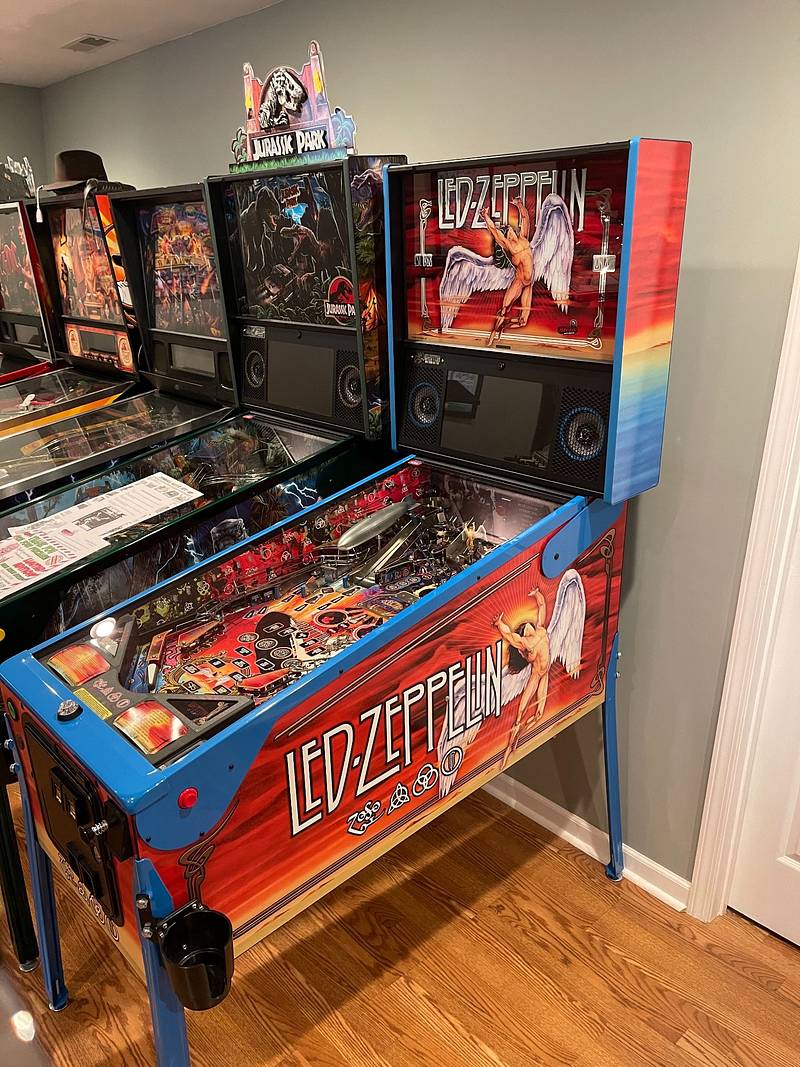 Just finished playing a few games on my LE and I'll tell you what, I was engrossed and having fun. For all the talk of bare playfield and not enough toys, I didn't really notice that. I was concentrating on making shots and this game deceivingly has a lot of them. I very much enjoyed locking a ball in the "Electric Magic box" and then trying to load balls in the other outhole locks before knocking the magnetic locked one out and having a 4 ball multiball...Also interesting was how the automatic launch sends the ball up the habitrail loop occasionally...I have tried to do that manually with plunger but never have yet. Did knock a ball out of the magnetic holder up the center ramp a few times....pretty cool....

You're currently viewing posts by Pinsider pinrock.
Click here to go back to viewing the entire thread.