Had a request for this one.

Which one is your preference and why? 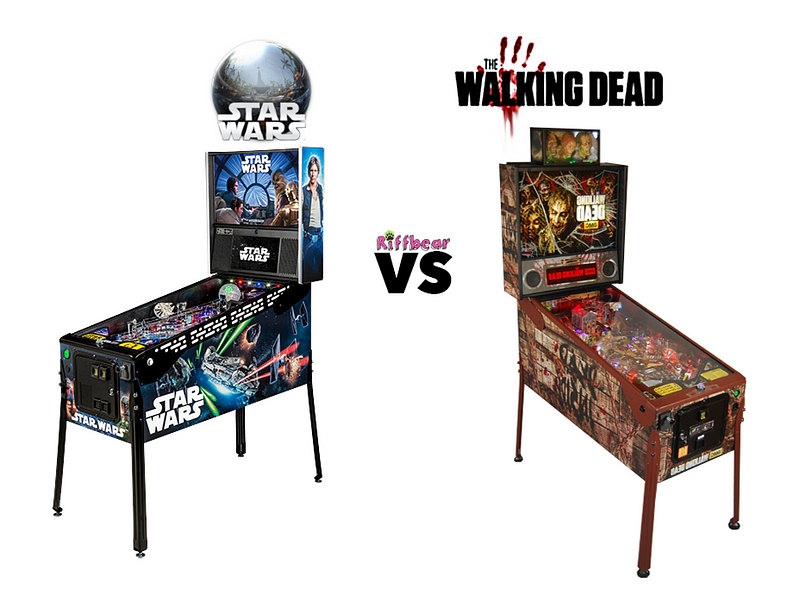 Not even close. I would take a heavily routed WD pro over a SWLE.

Not even close. I would take a heavily routed WD pro over a SWLE.

In my opinion. Stern Star Wars from the game play. The modes are represented great in synergy to the LCD film clips and voice overs from the original films . The music by John Williams score is excellent . All this brings you into the Star Wars original Trilogy universe . The game play is hard. But there are so many ways to choose to play the rule-set. The shot multiplier system is very addicting as you learn how you may manually move the shots around the playfield for maximum scoring . I have never played a pinball game with this type of control given to the player. This style of code brings so much "breadth" of strategically building up you shot multipliers and choosing different main character from the Star Wars 1977 film to aid you through your playing experience .

Themewise I freakin love the original trilogy and hate The Walking Dead.

But TWD pin is light years better than Star Wars.

I like them both.
I have a SW premium and a TWD LE.
I voted TWD LE but with a color dmd

I'd take any version of TWD over SWLE. I don't even have to think about it.

Also with Clelands Sound work combined with the awesome modes and Wizard modes and light shows it is way more integrated than that of star wars modes , hopefully changes for SW makes it better as I own one

I would say SWLE as The Walking Dead lacks licensed actor voices and video in both modes and playfield artwork. Custom audio won't fix that either. TWD has no mention of the shows characters in modes which for such a heavy character based show is a bummer. The modes that are in the game end around season 4 or 5 which is also a bummer considering the show is now on season 9...I also think Star Wars LE has the cooler toy offering with the hyperloop ramp being much more of an interactive toy then the zombie in a barn toy. Cabinet + playfield artwork and armor is more attractive on SWLE in my opinion versus TWDLE. SW having an LCD versus a DMD is also a big draw. TWD is a cool game, I just personally prefer Star Wars.

I've joined TWD premium club. Pick it up in a few days.

Not even close. Walking dead may be an ugly game to look at it but it’s lightyears better than that empty game Star Wars. That hyperloop gets old real fast. I still maintain data east Star Wars is the best one out there. Also aren’t people still waiting on sterns topper for the game to be released

I own a SW Premium and a TWD Pro. I love both games, but if I could only keep one... it would be TWD (though a custom audio package is an absolute must).

Not even in the same league, TWD LE is one of the best pins ever made!

Not fair to Compare SW and TWD, SW is junk against TWD.
Original Star Wars movies are my favorites still, but the pinball machine is really a letdown, hope its okey to share MY experince with a NIB SW LE:

A better question is TWDLE versus everything else.

One of the best ever

It’s a shame it just missed the LCD era

A better question is TWDLE versus everything else.
One of the best ever
It’s a shame it just missed the LCD era

Good it missed the spike era though

I prefer TWD pro over the premium/LE

TWD is so much fun, even the Pro. It is probably my favorite layout of any machine.

SW was a huge letdown for me in both Pro and LE iterations.

I own Twdle its a great game. I also think the layout and s great. Code is ridiculously awesome Speech mod is a must.
I’m getting a swle currently. I think it has a place too. Most of my games are not flow based . Swle gives that as well as a deep code finally. Plus of course great theme.

SW is a great game super fast and great flow with deep coding
TWD is also a great game but more about bashing, great code as well

Both are fantastic games, both are great themes, if I had to pick one though Id go TWD; but the pro, as I prefer it over the LE.

I used to own a TWD Prem; and I actually prefer TWD Pro. Currently own SW Pro.

I think these 2 pins share many similarities. Both can be brutal, but both can have rewarding ball times. TWD got very much hate early on, but once code got updated and people started learning the rules, it got praised and is one of sterns best. To me, SW is very similar; I think the people that hate this game or simply do not like it don't understand the rules. I was one of them. Understanding what each color of the lights represent and what the sound effect timers mean is key to understanding this pin. Once you learn that, then there's the multiplier rule which can be difficult yet very rewarding - people seem to think you need the multiplier always on, but there's certain modes or points of the game that I find it easier/more rewarding to leave them off since game is so fast, then lock them in when they're at a desired point.

Then, there's theme. SW smokes TWD theme out of the water. Especially since TWD needs customized sound packages to make it better. I'm not sure when stern implemented the better improved call outs for SW, but it really is cool to hear character specific call outs during the game and they did a great job of putting in shot specific call outs that actually aren't spammed like some pins and cleverly placed.

Im really enjoying the paths and strategies in SW more than TWD. SW isn't your traditional style pin, it's much more of a choose your own adventure with different paths and outcomes. Having multiple missions to explore and the rewards for completion progresses the better you do. The multiball stacking in SW is pretty phenomenal and actually beats out TWD for that.

All in all I prefer SW pro over TWD Pro and Prem. It's more fun, on the edge of your seat, and the drains aren't as frustrating - I want to press start one more time moreso on SW than I ever have on TWD. I can't comment much about SWLE as I have only played it when I didn't understand the rules and hated the game.

EDIT: one other thing Ill mention. I prefer gameplay of SW over TWD - im not big bash this bash that kind of guy. The horseshoe shot on SW is bad ass; but the ramps in TWD are better than the SW ramps. Outter loop shots are way way better on SW and feel terrific. And, I prefer the drop target system on SW more than TWD. I actually also prefer the center action button rules and usage on SW as well; lots of cool things to know and use with the action button of SW.

We have our last two people saying they prefer the Walking Dead pro more. How come? Just the bicycle girl ramp??

We have our last two people saying they prefer the Walking Dead pro more. How come? Just the bicycle girl ramp??

Better flow. Less cheap drains. And yes, don’t care for bicycle ramp. XBOW is alright but can live without. Only thing I really like in the prem is the spinners and fun little bonus rules associated with them.