Some nice looking EM arcade came up on internet

Didn't you just get that ball bowler Alex? Doesn't it fit into your game room?

I did about a month back I think. It could fit, I just decided to move in another direction. Cleaning house a bit. Sold my beloved Jungle this weekend. Still feels sort of weird. Kind of liberating and sad at the same time.

What? No pins at all? Blasphemy!

I'm sure at some point I will add another pin back in.

Here's a few of mine.

I did just pick up the bowler about month back. I have a few nibbles on it, but who knows, if it doesn't sell soon maybe I will start working on it. It's pretty cool with a lot of potential. For me dedicating the time is the hardest part.

I did just pick up the bowler about month back.

Yeah, I remember you asking about wiring pics for plugins.
If you're somewhat still looking, there's a Strike Bowler on Mr.
Pinball. It was posted April 19th. Might get some help there..
BTW - It's nice to see some of those older woodrail Shuffles
being enjoyed..

Really happy to have found this thread! I tend to gravitate towards EM arcades more than the pinballs.

Here's a game I have up for sale, or totally open to any trade offers. It's just I got 3 of these in a package deal.

It's just I got 3 of these in a package deal.

A few months ago I traded a Comet for an United Playtime Big Ball Bowler.
I've had/have a few of the Shuffle Target games. Really like those machines..
I think United's 5th Inning may be the most unique, but Williams Kick-a-Poo
may be the best to play which I believe to be the last made of the Skeeball
Shuffles..
I had the Kick-a-Poo in a Buddy's resturant and last week replaced it with a
small ball bowler. A Friend said that he's surprise that I put that out, and I'm
thinking he's probably right. It's now in the center of the gameroom. Have to
try and find room for it. I'd like to keep it set up.. 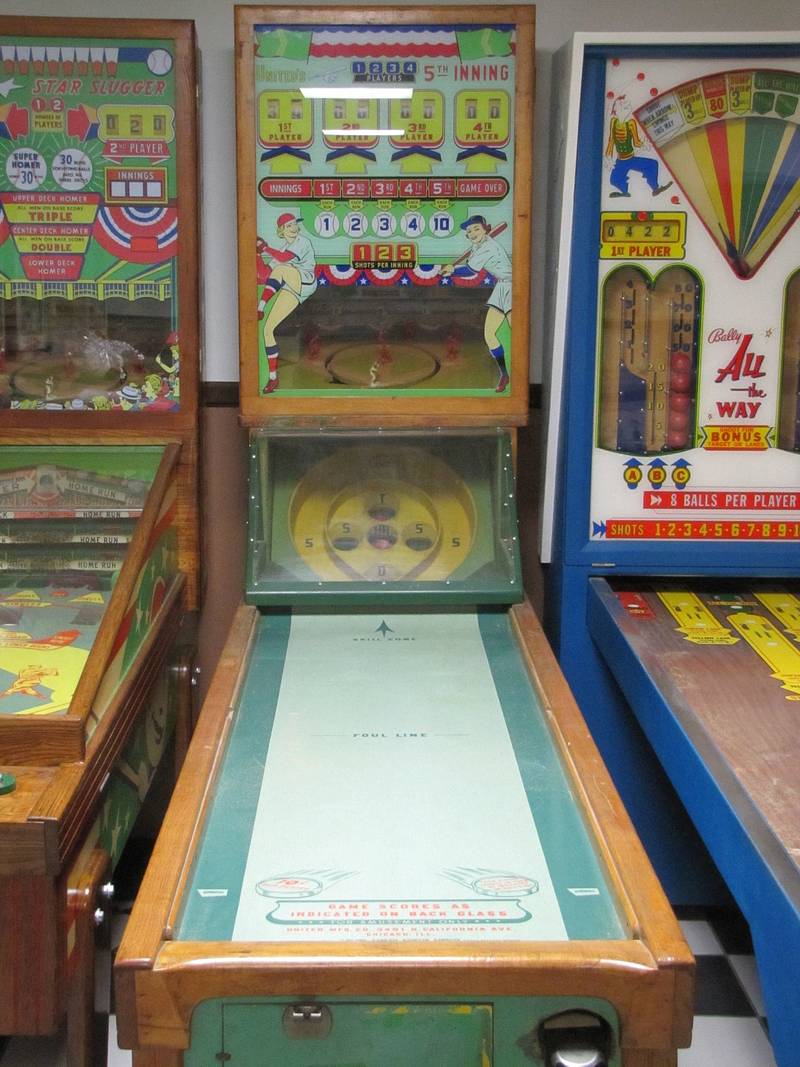 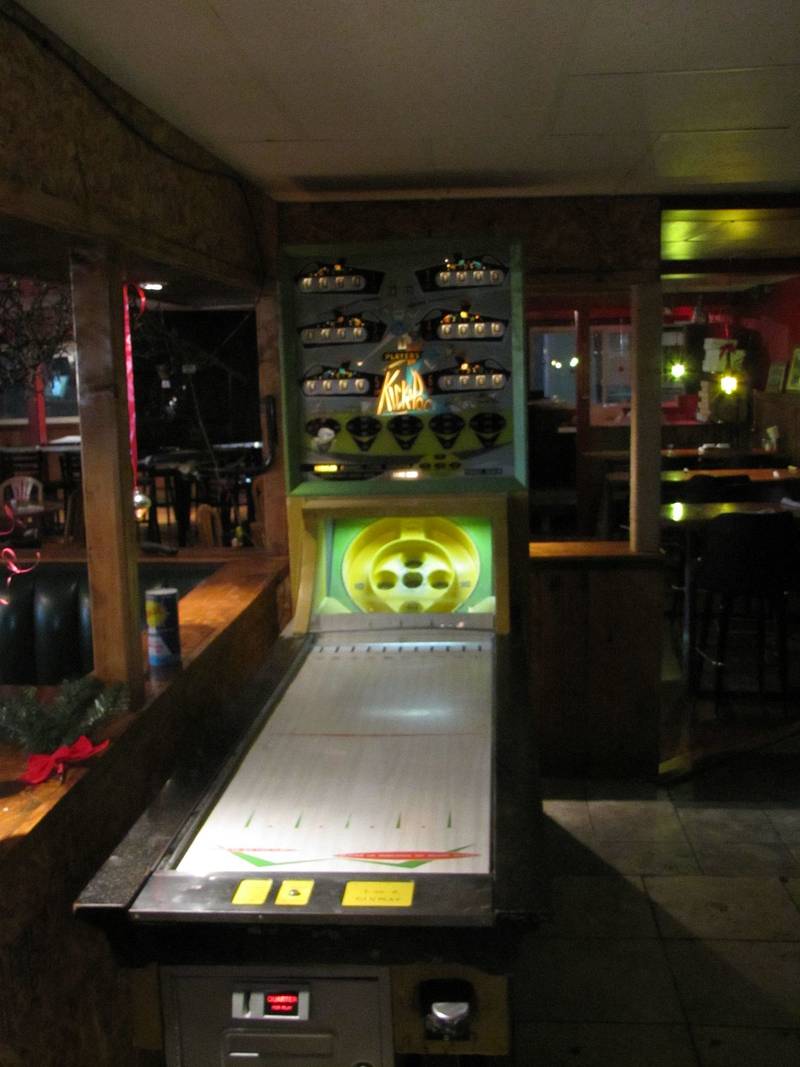 Those are nice to play, and I think I posted this one elsewhere, but as far as the
most unique shuffle I have, it's the Bally "All The Way". I sometime have to post a
video of it being played. Hard to figure how Bally came up with its game play, but
worth keeping set up.. (T) 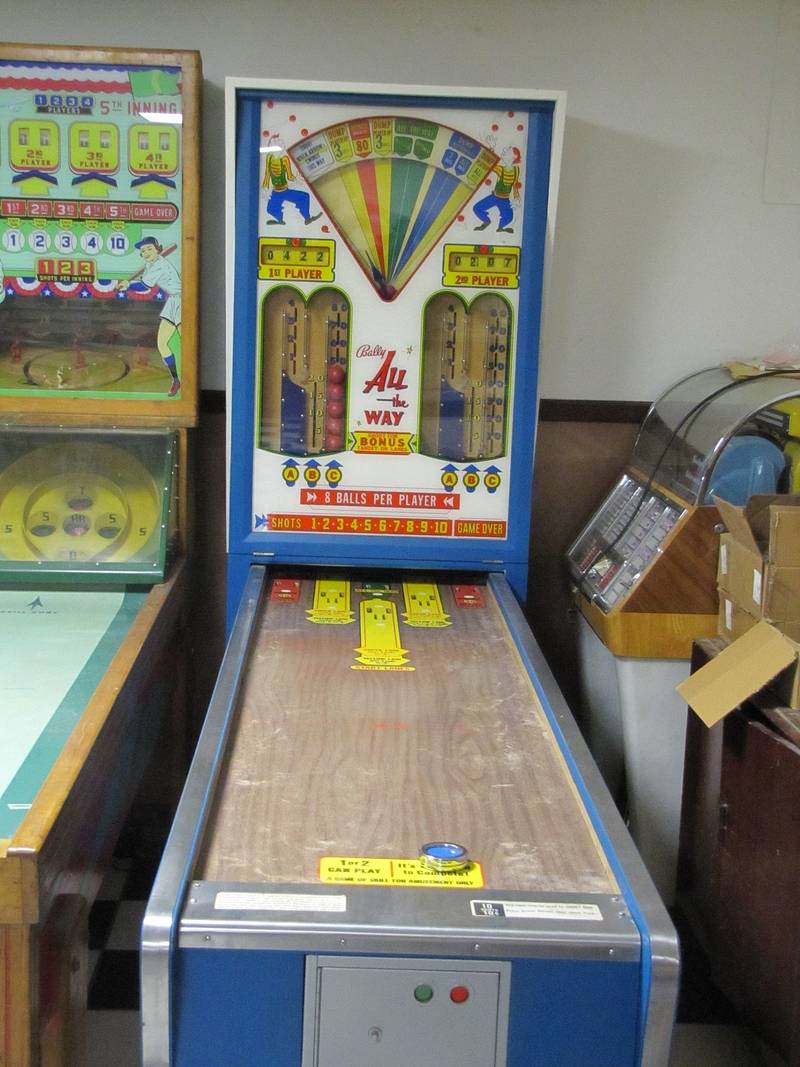 I had to take pics of another arcade piece, so I took a few others also. Here's a little
better pic of the Kick-a-Poo. I had it stored for a few years, and always wondered
what the other two games were that were on the machine other than "Advance" and
"Flash", which were the only two on other Shuffle Targets that I had, so last Winter I
went through it. What makes this machine more fun to play (well to me anyways) is
that on the game selector, you have the option if making the 70 (center pocket) you
shoot again. Inside the back door it's adjustable that if you keep making the 70,
you keep shooting, or adjustable that if you make the 70, you get 1 extra shot.
Now that it's in the game room (and not out), I may adjust it so you can keep shooting
unlimitidly, but it isn't easy to make the 70 too many multiple times..
It's not the nicest looking Target Shuffle, but to me, it's the best player that I had.. 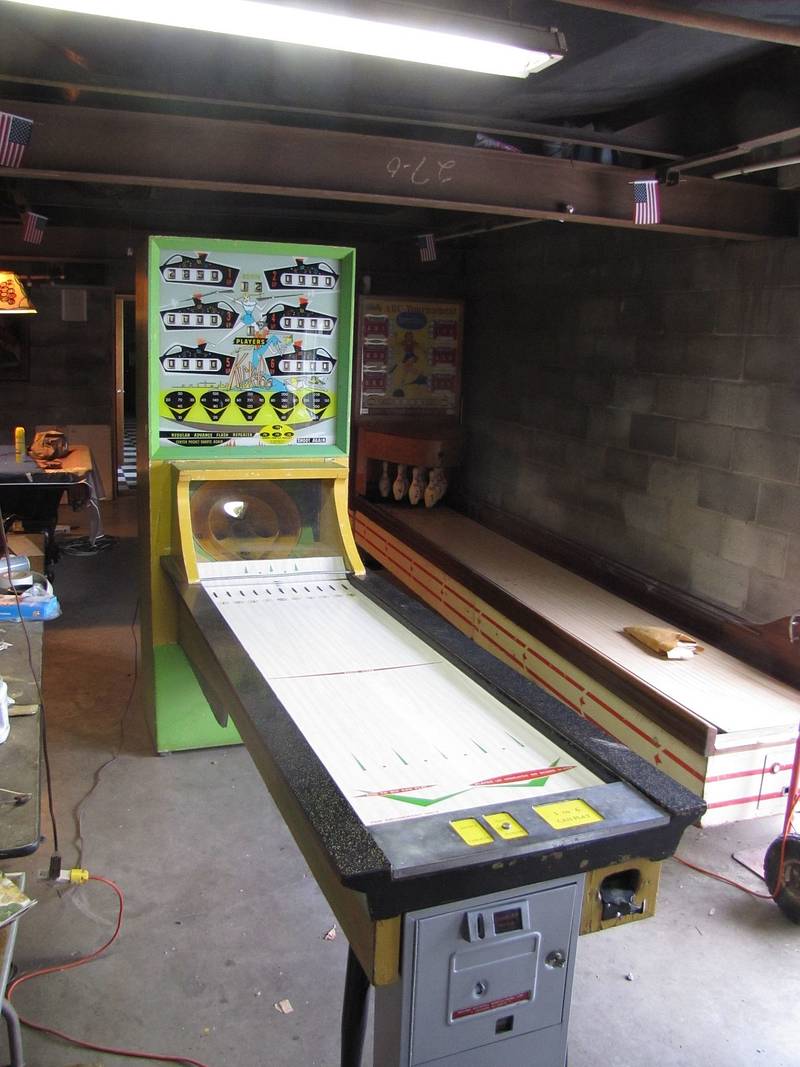 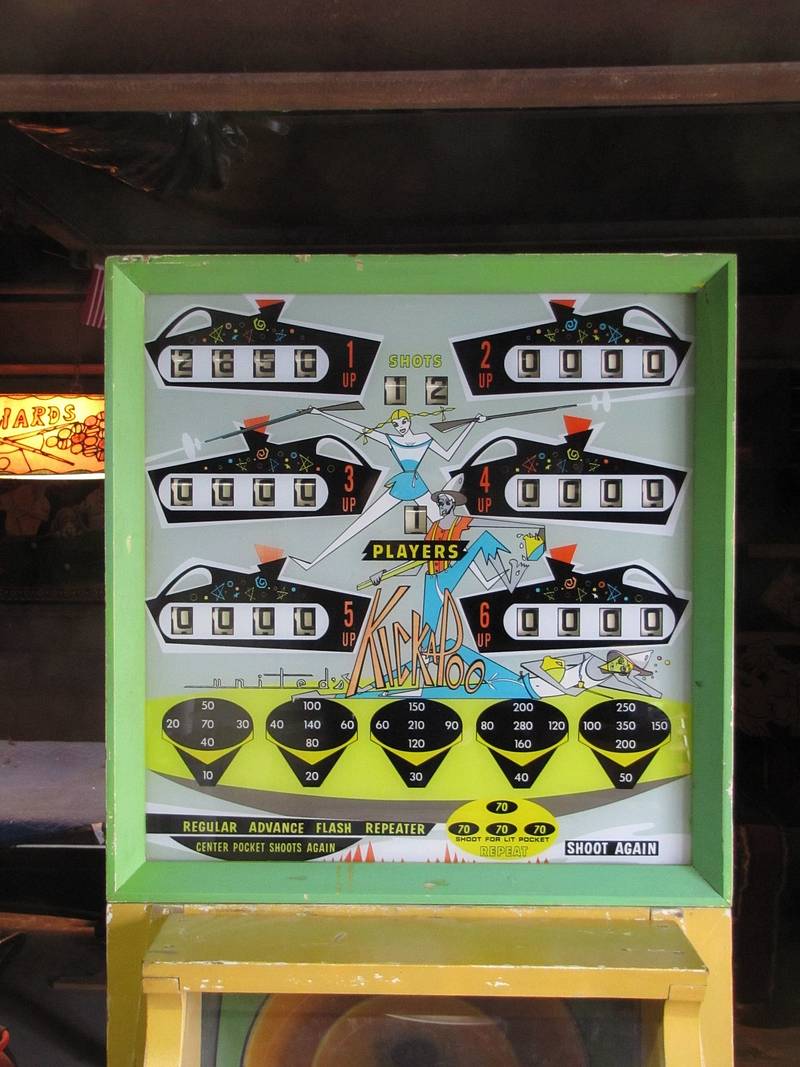 I have what I think is the first production Skee Alley. Aptly named. i doubt it's as fun as Kickapoo but it's got some charm. 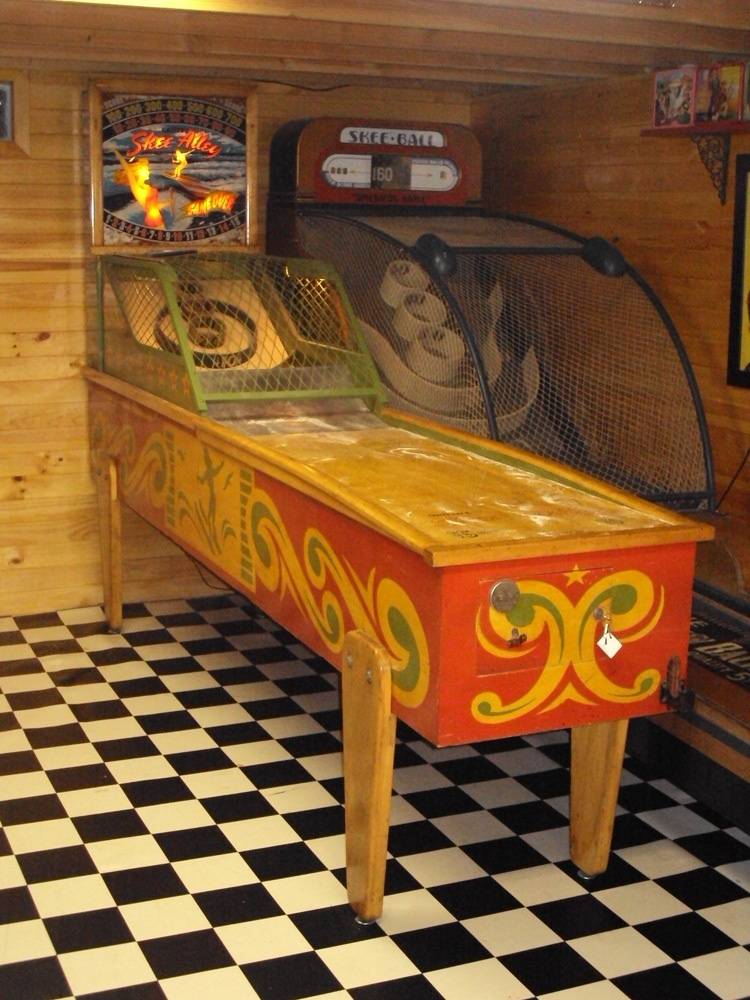 I have what I think is the first production Skee Alley.

If I had that Shuffle, I would never let it go, and it looks to be in super shape.
I thought maybe one other (had score reels) was before Comet, but yours has
to be 1950 at the latest.. Not only first, but is there another? If I had them, I'd
trade 5 Kick-a-Poos for it.. (T)

Yeah, I have considered selling it a few times but my wife loves how it looks, and we went through hell to get it. There was another one right after named Shuffle-cade. It was the weirdest thing when I bought the Skee Alley I had it in the trailer at a restaurant in Indiana. My wife needed to use the bathroom (long story). Anyway this guy comes up and is like hey is that one of those shuffle games. I was like yeah? He was all excited to tell me he had one like it named Shuffle-Cade. He probably would have sold it but I didn't pursue it. I was on a tight budget and wanted to get back home. Anyway I have never seen another one (Shuffle-Cade) and thought it was weird there was two of these old timers in the same town.

That's what I thought you meant, but now that you have me thinking, who's to say
it wasn't the only down the line. Does anyone know of another? Maybe single proto!

Just looked it up. There was a Skee Alley on e-bay just last Feb., but still one
I'd hang onto..

Here's a baseball I took a pic of that's not often seen. Can't say that it
matchs up to a Star Slugger, but still enjoyable to play..
To my knowledge, it's the only Pitch & Bat with a man-running-unit
that Bally put out.. 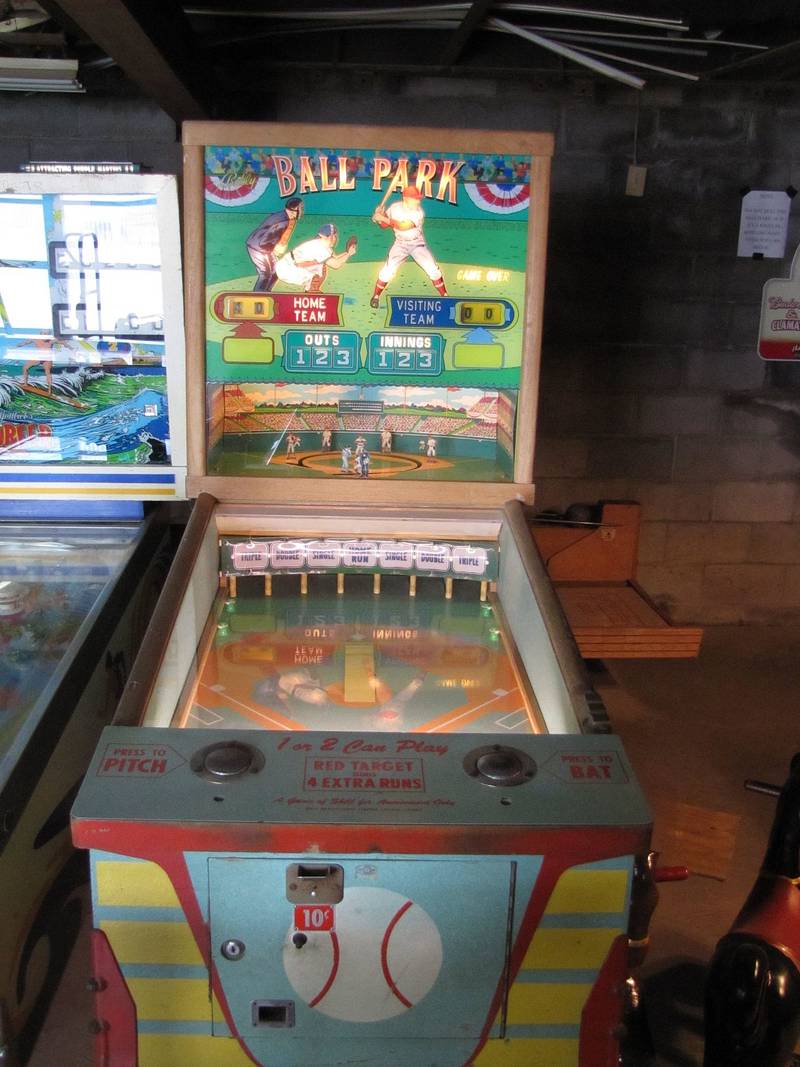 Those are nice to play, and I think I posted this one elsewhere, but as far as the
most unique shuffle I have, it's the Bally "All The Way". I sometime have to post a
video of it being played. Hard to figure how Bally came up with its game play, but
worth keeping set up.. (T)

That's another game that came in the package deal I got! Haven't set it up yet, but the one I received looks to be in outstanding condition. What's the object of the game here? I purchased it because I thought it was the last shuffle game Bally made, so I figured it'd be the most advanced game play.

I'm pretty certain it's the last Bally Shuffle. I have 2 of them (2nd needs quite a but of work, but doable)
and with yours, I know of 5 total.. By any chance, do you have the schematics? I went through the entire
machine 100% and fortunately it played fine with very little trouble shooting after, but schematics with the
machine would be nice
The object is to get your balls all the way to the right shoot which awards the most points. A perfect shuffle
shot gives you 4 balls "All the Way" from none to all the way to the right shoot (vertical lane). You can also
get 3 balls over there right from the start by pushing the green button that's on the coin door which puts the
animated arrow in the backbox (the entire backbox is animation!) in motion. You then time it so you shoot the
puck (have to lead it a little bit) when the arrow is on "3 All the Way. If you miss time it, I believe you give your
opponent 3 of his balls. If you load up the right shoot (8 balls), a red light comes on at the arrow saying 80 points
and if you properly time the arrow, you get an extra 80 points, but if miss time, (can't exactly remember) but
it awards your opponent. The thing is, anytime during the game when it's your opponent's shot, he/she can drain
the balls that you had built up on the right shoot by timing the arrow. Once again, if missed timed, you opponent
would drain balls on his/her right side shoot.. There's more to it, but that's the basics. Now you understand why
I rather of had made a video explaining..
With two playing, it's a good player (once it's fully understood), but why I keep the machine set up is because
of it's crazy uniqueness. It's not an easy game to totally understand, and back when they were out (I'm thinking
a limited amount) and the beverages were flowing nicely through the veins which I'm sure many times was the time
many wanted to play the arcades, it might have been a little too much work to try to understand the machine than
it was worth, thus, "All the Way" may have turned out not being a huge success with production coming to a quick halt..
One thing you'll want to do is a good cleaning on the ball board so the kickers will easily (and smoothly) kick the balls
up the lanes. I used Lemon Pledge for my final cleaning on both the balls and the board. The pledge kept it slick..
Let me know about the schematics.. (T)

Here's a machine that I haven't gotten to yet, but looking forward to do so..
I have a Scientific Machine "Batting Practice", and this Keeney machine has
the same style ramp that the ball rolls down and you swing at it when it
comes to the end of the ramp and is in mid-flight.. The Batting Practice
has a large arm that raises the ball to the top of the ramp The Keeney machine
actually has a tiny ball lift (as a ball bowler has) to elevate the ball to the top
of the ramp, then has large flipper buttons to pitch and swing the bat. It's in tight
storage, so not great pics, but the Keeney I'm looking forward to get to more so then
the Batting Practice.. 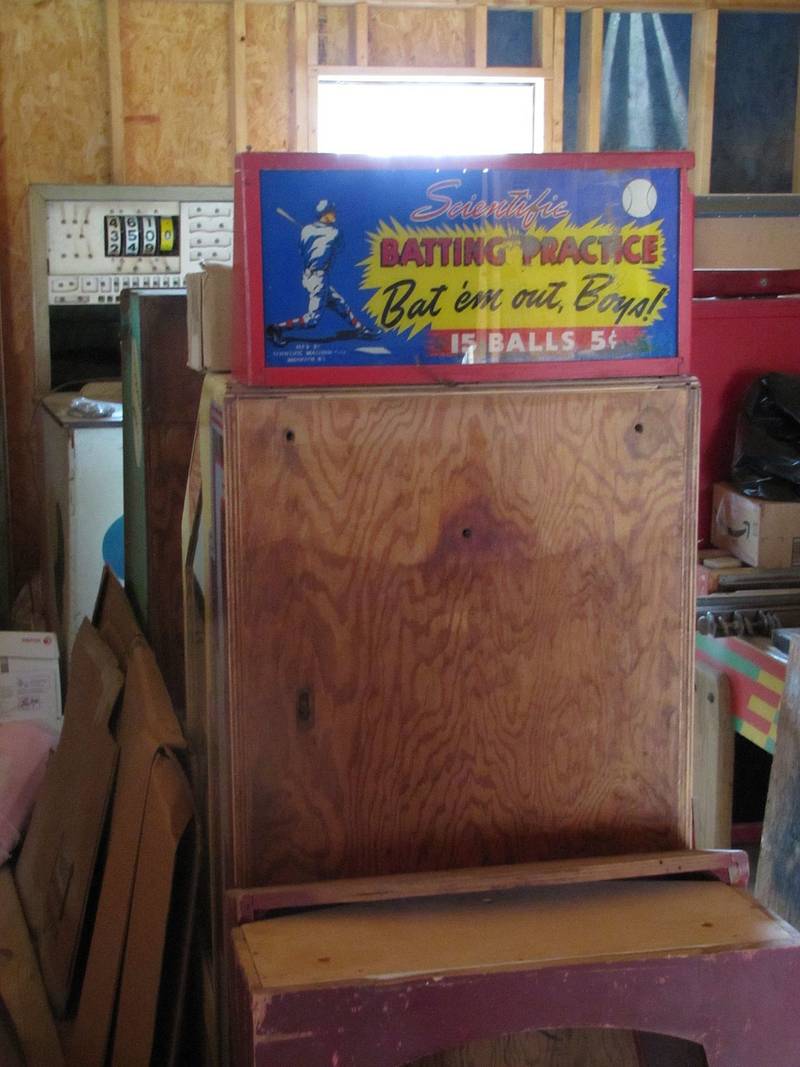 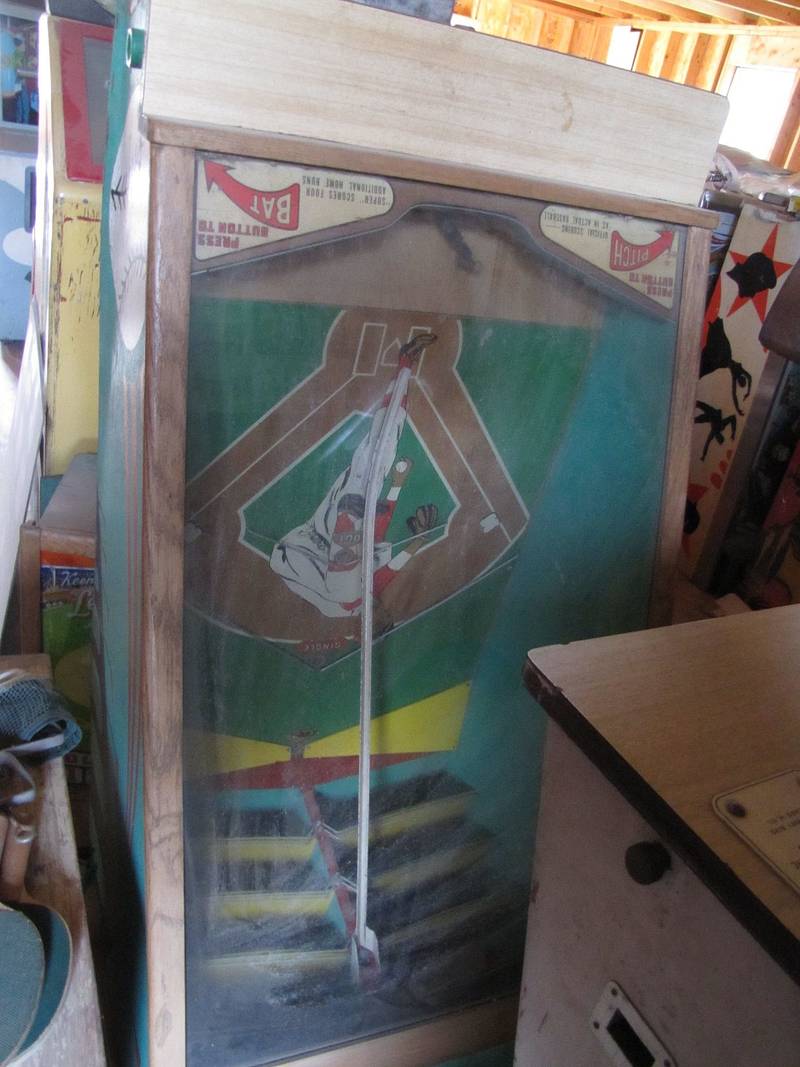 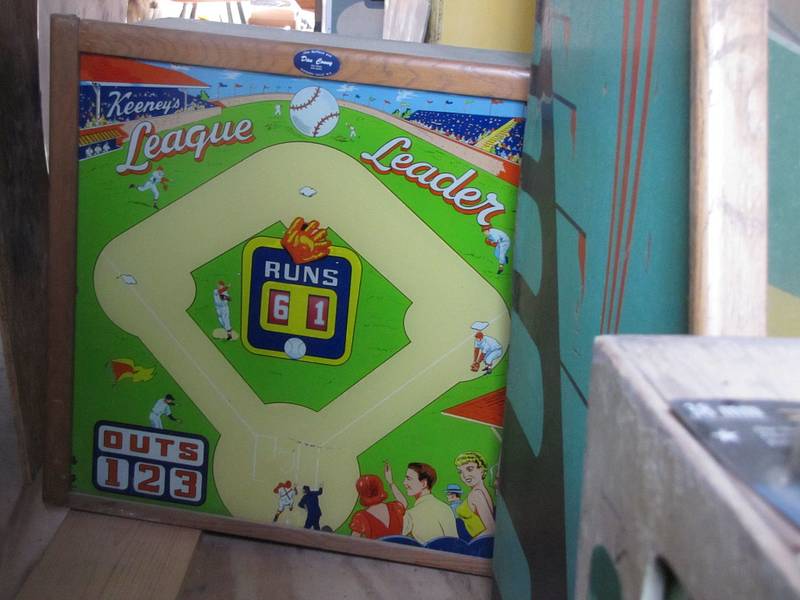 Some neat ones...
greenbay.craigslist.org link

Here's a pretty nice deal on a cool old game.

I've been searching for days for any info. on this. Nothing anywhere. I hope someone, somewhere has an answer.

I'm not convinced it was manufactured by UMC themselves. "UNITED'S" looks on,
but the rest, idk..
Would have been nice to see it with the front cover opened..
If it was a true UMC, I'd have to bid..