Sky Jump is my first EM I've owned, so I'm not completely familiar with the layout on EM machines yet.

So, here's the outline of what is currently going on:

When I first got Sky Jump last summer, it was having problems where it wouldn't start a game and would just "cycle" after the score wheel reset to 0. I determined that I had to clean the jones plug connectors in the back box, and sure enough the game fired up and I enjoyed the heck out of it with no problems!

But about a month or two ago, Sky Jump started doing this: After first plugging it in and turning it on, the game would operate normal. However, when the game was over and the last ball drained, the backbox would light up with "Game Over" but the ball would eject. When I would plunge the ball, none of the pop bumpers or triggers would work because it assumed the game was over.

When I would then try to start another game after this then the "cycling" issue would happen again. The score reel resets to all zeroes, but I hear a repeating motor (sounding like it's underneath in the cabinet) that keeps going and going, and the ball never ejects and the game never starts. When I power off the game and try powering it up again, the same "cycling" continues.

Now, however, when I first plug in the game and power it on to start a new game, the playfield will light up for a second, then turn off and the game never starts.

The only things I've done so far to this point are I cleaned the jones plugs underneath the playfield (the backbox ones still looked clean), and I switched the connector from 5 ball to 3 ball. 3 ball did work correctly, but the same issue occurred with the game over and kicking out another ball, the "cycling" etc.

So I just need some guidance on where to look first. My guess is it has to do with either the ball counter, or the game reset relay. But again, I'm not very familiar with EM machines yet.

Very cool game, on our want list
Sounds like there could be a couple of things going on, the usual EM stuff like dirty switches, misadjusted relays, or gummed up steppers. If sky jump has a manual, you could walk through the startup sequence go see how far it gets before you get the motor cycling.

The reason the motor cycles is because it has gotten to a certain step, but the step hasn’t completed, so it keeps trying over and over. The trick is to figure out exactly where. Are the score reels reset? Is the ball count reset? Is the relay bank reset? That kind of stuff.

I did notice the “A” relay in your pictures. Our king pin and pro pool have that relay. It’s a latching relay the gets kicked off by one coil when you start a game and then reset by another coil when it’s done. The latch works by arranging the relay actuators so that they click and hold each other until the reset pulse. I have run into the case where they get dirty or out of adjustment and then the game does exactly what you’re describing.

This guide helped me out a lot with this. There are associated videos on YouTube that help.
http://www.pinrepair.com/em/index3.

I wish I could be more specific, but I don’t have the docs for that game. One thing that I do is to search for the game on pinside and then select the forum tab to get all the postings that link to it. You can often find someone who has run into exactly the same problem.

This should be useful 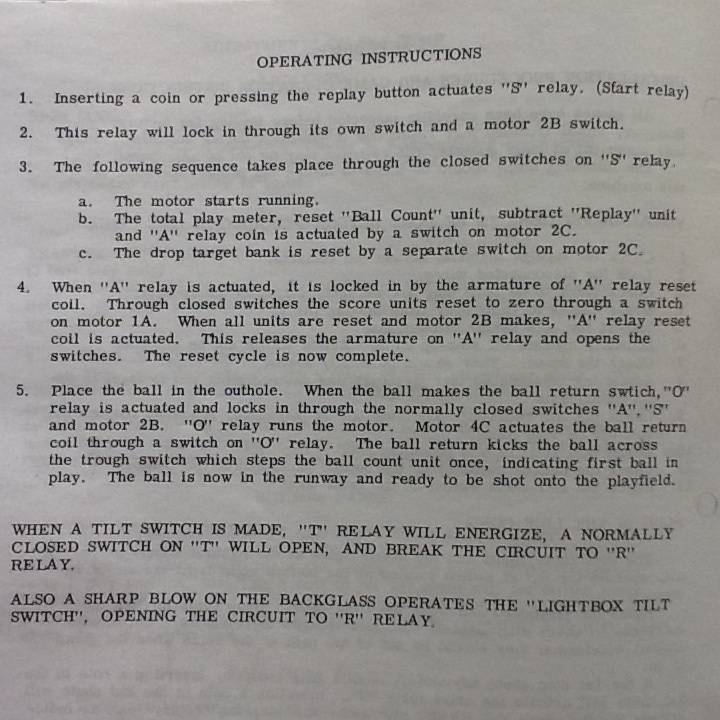 Quoted from Pinbee:This should be useful [quoted image]

Exactly, I’d walk through step 3 and 4 to see how far things get.
If it all looks good, watch carefully for the A-reset coil trying to pull to unlatch A.
I was able to feel the hum of the coil and that’s what led me to finding that I needed to clean up the latch plates. It doesn’t take much crud to make them stick. The score motor contacts energize that coil for a very short time.

After first plugging it in and turning it on, the game would operate normal. However, when the game was over and the last ball drained, the backbox would light up with "Game Over" but the ball would eject. When I would plunge the ball, none of the pop bumpers or triggers would work because it assumed the game was over.

So I checked on the ball count stepper, and it looks like the gear moves very slowly, or doesn't "engage" and move when I manually trigger the movement of the coil.

My guess is it's probably just really gunked up and I need to clean it. The entire mechanism for it feels very stiff and doesn't move smoothly.

Would the best way to clean it by using isopropyl alcohol on a q-tip? Also, I have that synthetic grease, should I also apply a small amount of that to anywhere, or just keep it clean so nothing gunks up in the future?

No grease. Alcohol or lighter fluid to clean