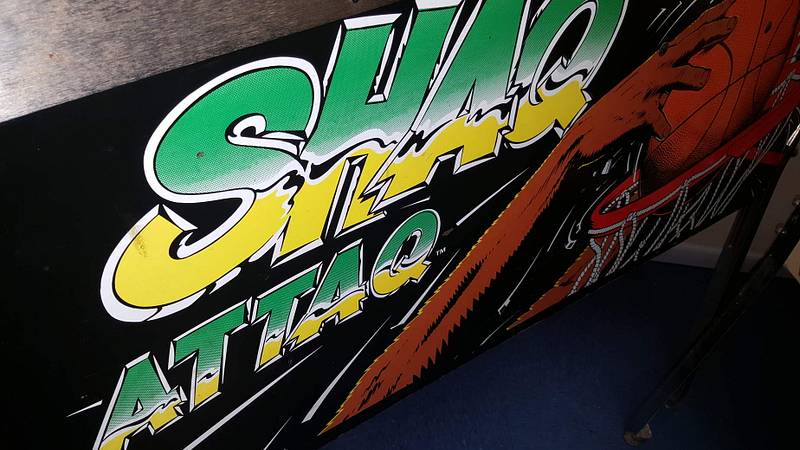 20151110_204104.jpg
I think this game is a SLAM DUNK... one of the more under rated games out there. It's a blast to play.. has great art & the call outs are entertaining. Let's see your Shaq Attaq restore/repair advice, mods & thoughts on this game.

Next step is to clean everything & put on new Titan competition orange rings & orange t-molding. 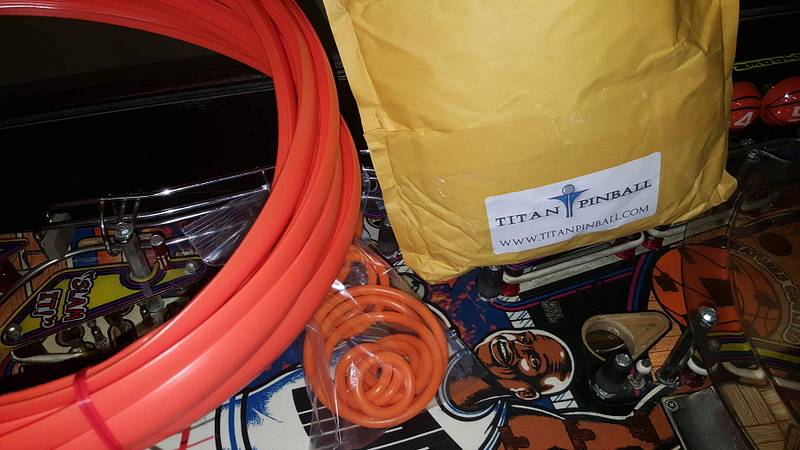 I am a fan. I love playing my Shaq Attaq. Please post a pic once you get the orange t-molding in.

& the call outs are entertaining

That is the first time I've ever heard that in regards to Shaq. I think I might enjoy having my fingernails pulled off with a pair of pliers more.

Shaq is a great lineup pin and a lot of fun to just play. I recently had to part ways with mine, but i'm okay with that decision. It was either that, or my Back to the Future, but I think anyone knows which game is way easier to get back. I'd much rather go on the hunt for a Shaq that everyone seems to hate over BTTF

that was my kit I put together at the titan rubber website. I hope I got everything down (I think I did) I can't remember if I included the 2 rings for the outlane because I removed them to make the game harder.

One of the great things about this game is you can play with friends and have a blast playing for just the separate basket points. A lot of different possibilities in gameplay this way (first to 5 wins, 2 on 2 combined scores, playoffs with 4 players) All inventive made up stuff, but a lot of fun!
Enjoy!

Glad to see some other Shaq Attaq fans here.

I bought a nos translite which didn't have the white SHAQ sticker logo on the upper right like the original translite did. I think it looks better without the logo but in your opinion.... should it go back on the nos one... if it was yours? 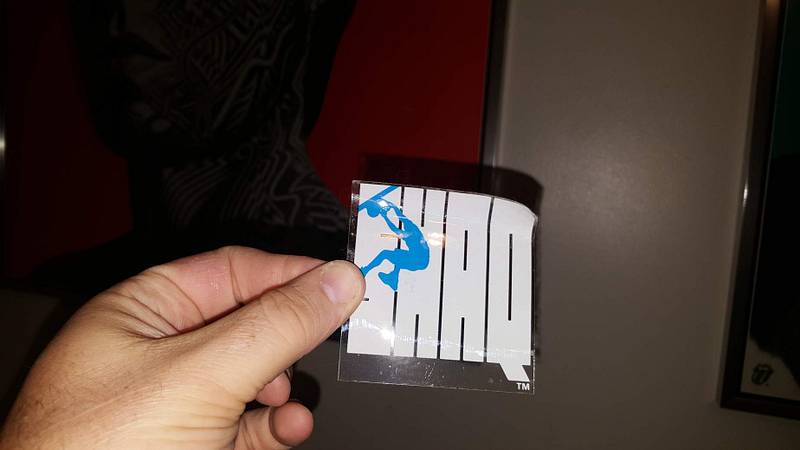 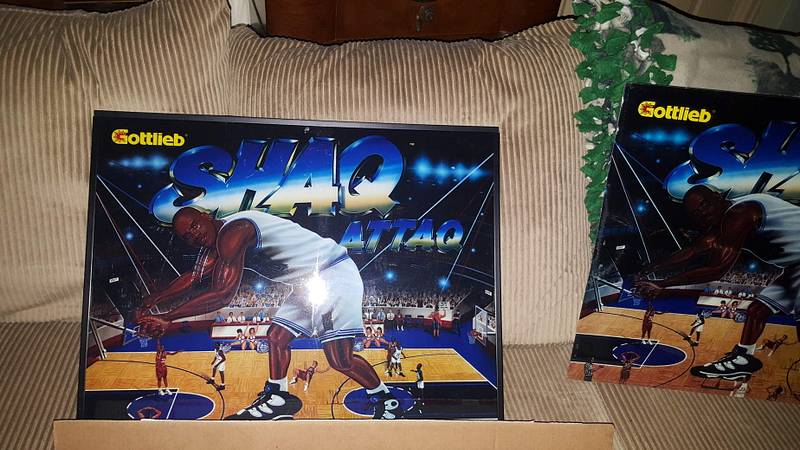 Shaq is one of my all time favorite LSU players. Easily the best athletic emissary LSU has ever had. He attends at least a few football games every year.

I'm glad someone enjoys his game. I wonder if he has one?

I enjoy a game on Shaq....revived one a year ago and a buddy of mine has it. Perfect entry pin or pin for a family environment.

I have been chatting via Facebook with the designer of Shaq Attaq (very nice guy).... Jon Norris. He ok'd me to post what he sent me regarding the process of designing & some of the politics that go with being involved.

Mr Norris says...
"Shaq Attaq was drastically changed late in the games development cycle when the marketing department demanded that we change the playfield art. I had a feature grid on the playfield like Surf N Safari, where completing shots filled in to trigger/qualify features. I still have the drawing of that original version. Also, marketing insisted on the "Coach" and wouldn't allow me to add a game setting to totally eliminate him. I had to settle on reduced nag speech instead. Finally, the original backglass art had an awesome Shaq shattering a backboard, but it was rejected by the licensor. The "Giant Shaq" art was rushed and incomplete. Take a look at the cheerleader’s arms. Despite these issues, the game was a commercial success." 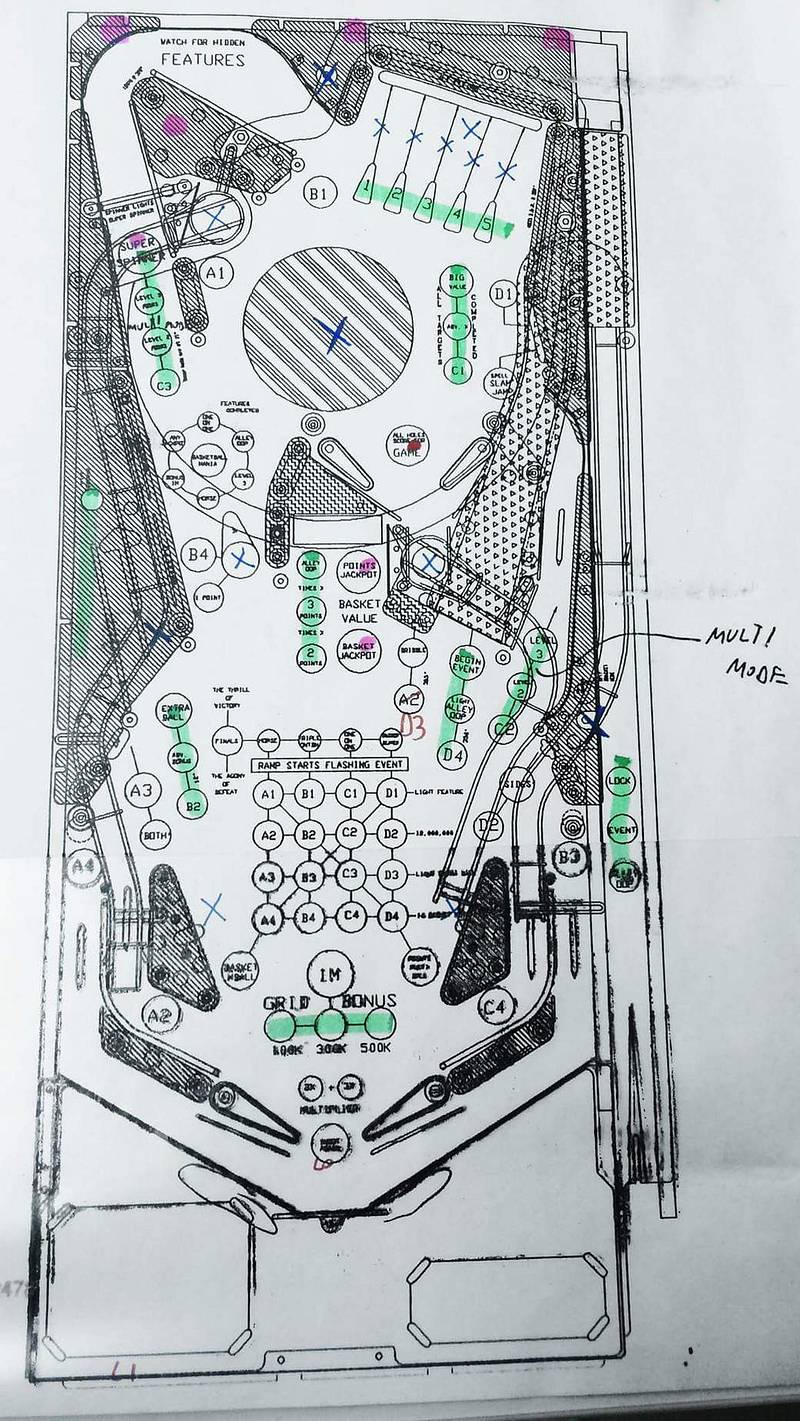 "Here is a picture of the armless cheerleader" 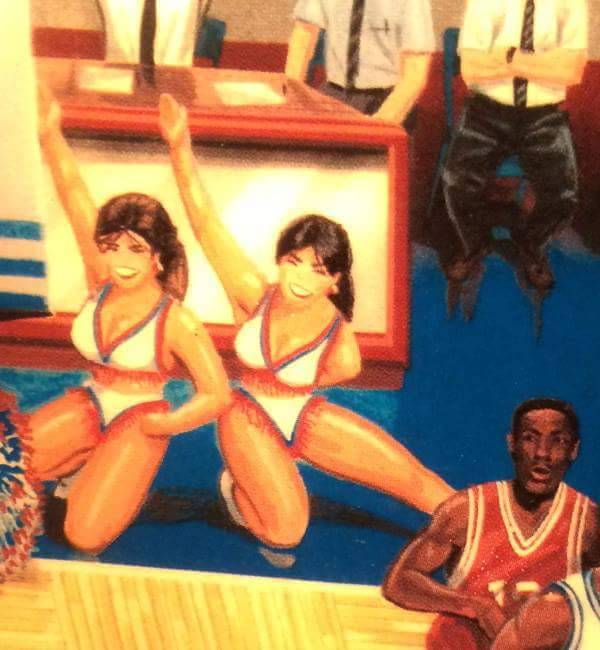 "I live in Las Vegas, working for a Slot machine Company. I will be going to Pinball Expo when I finish my pinball game, but probably in 2017 since it will take me a couple of years to make and program the game."

Looks like the cheerleader has her arm behind her back...

Looks like the cheerleader has her arm behind her back...

This other cheerleader is the best with nub arm. 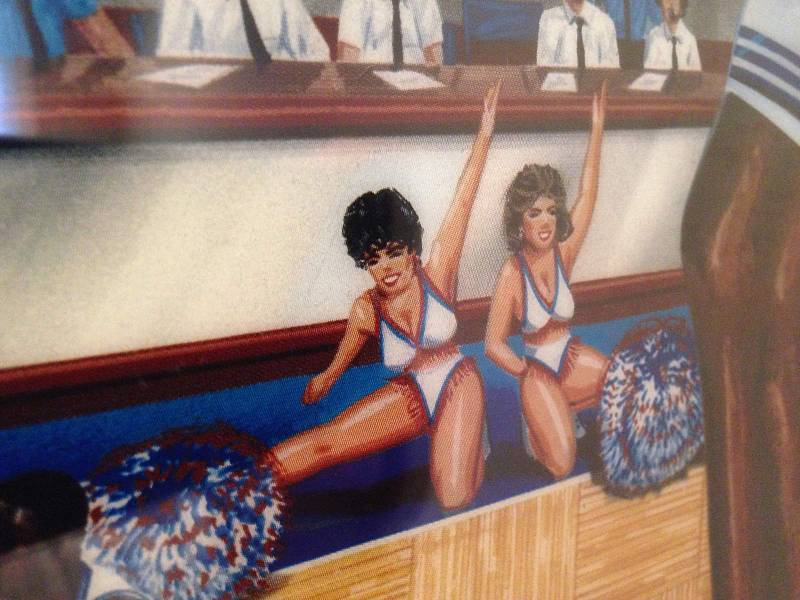 There's was a Shaq pin at a local auction yesterday...sold for $500

I thought about bidding, but decided to pass.

I bought mine for $150.. have about $130 more into it buying orange Titan competition rings, t-molding & balls. Maybeven get Led's down the road. Will be a blast.

He also had a Party Animal but it was pretty toasty that I could get for $50 but I passed. 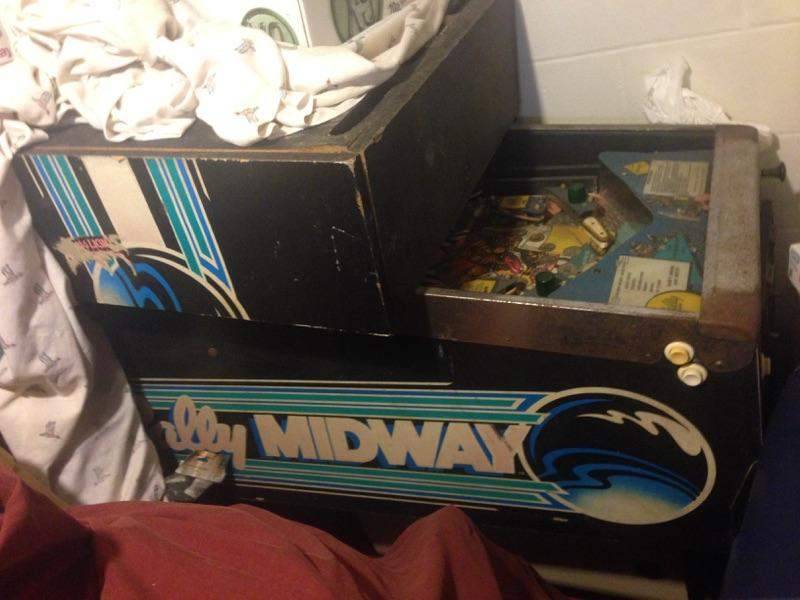 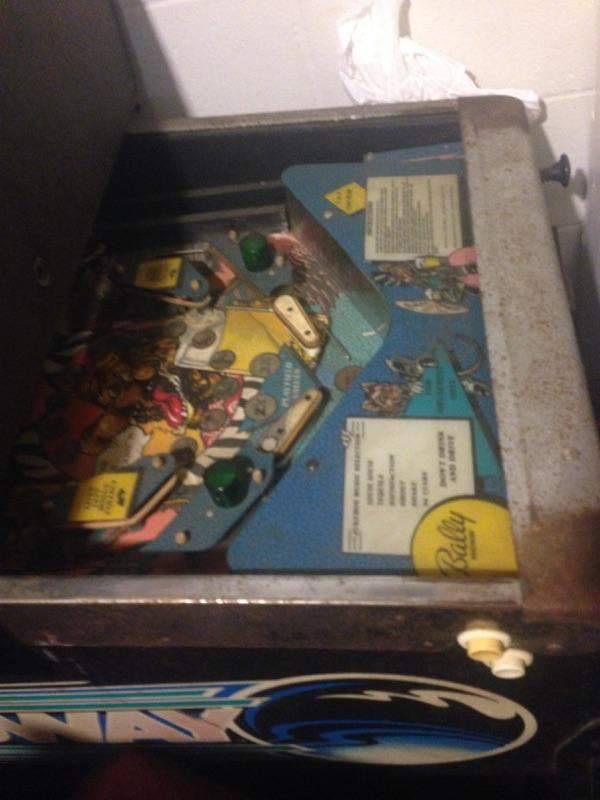 The Shaq Attaq is a rewarding game to work on. I am taking 1 part of the pf off at a timestate then cleaning & waxing.

quick shout out to Collin here on Pinside....he can fix the scoreboard digits in case anyone has one that is not working properly...

Yes... Collin has my Shaq Attaq scoreboard right now & I'm looking forward to having it working & back in the game. He's a nice guy & is easy to deal with.

Anyone else have a problem with a random ball kicking out to the shooter lane for no reason? And if you plunge it, the machine doesn't realize there are actually two balls out on the playfield?

I am a fan also. Fun and underrated game for sure!

Please help me on my quest to find the spinning disc decal:
https://pinside.com/pinball/forum/topic/wtb-shaq-attaq-spinning-disc-decal

I am interested in the disc decal as well. I was just going to make one on the computer and have a decal shop make it for me. If I do end up getting them made, I will let you know. Or if anyone has any, I would be interested in one as well.

I was just going to make one on the computer and have a decal shop make it for me. If I do end up getting them made, I will let you know.

If you do this, I will be interested. So far nobody has contacted me about the decal, so I still have to wait patiently.

I noticed there was a metal part near the plunger that may be bent or may supposed to be this way. Can someone please show a picture or tell me how it should be? Thanks 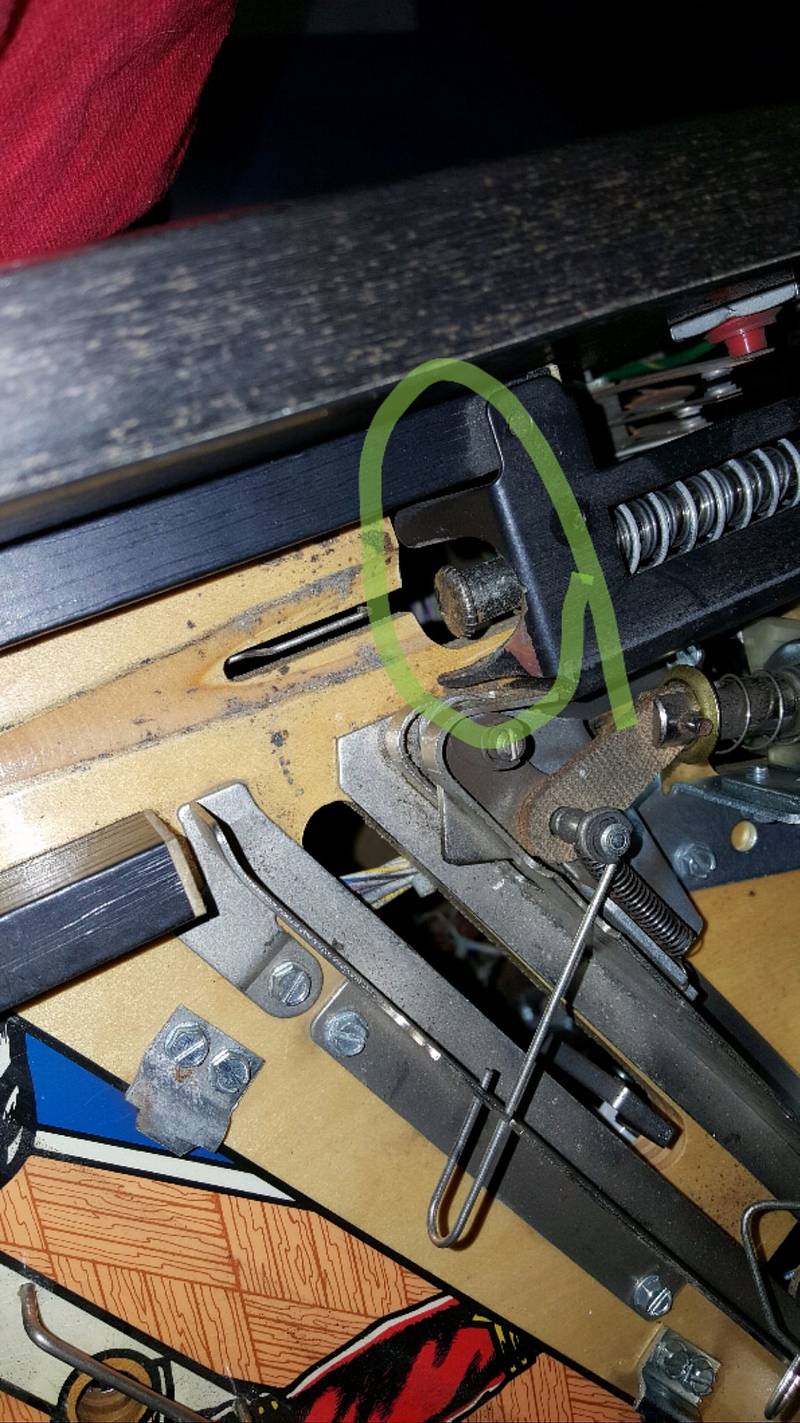 Here is a similar shooter rod apron from a current e-bay auction.

That shooter rod looks pretty mushroomed out too, from using it without a rubber on the end. You may need to grind it down before removing and replacing. 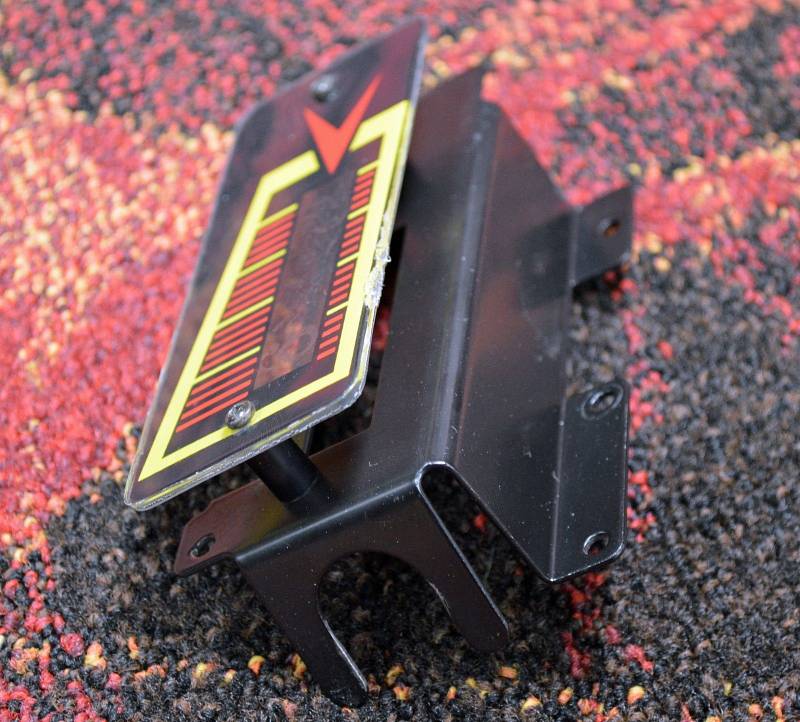 Thanks tons dozer1 ! I never thought to look on Ebay. I have the shooter rod kit & saw a YouTube video on how to put it in. I should be able to take that piece out and put it back into the original shape. Thanks again

I saw on Facebook that someone was looking for the newest ROM (v5) for Shaq Attaq. How does this ROM change the game?

The playfield is pretty dirty so I'm taking most everything off the playfield. Do any of you know how to take off the backboard rod? It needs to be removed to remove the plastic. I didn't see it in the manual. Thank you 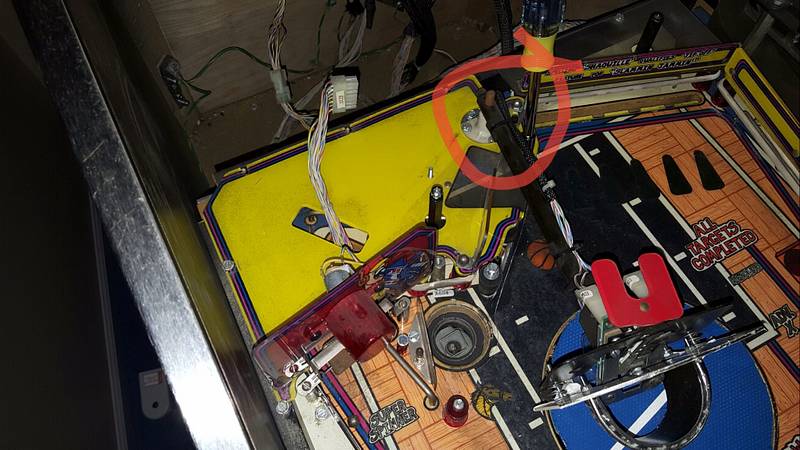 I figured it out! Use a #4 Allen wrench on the rear end of the rod. 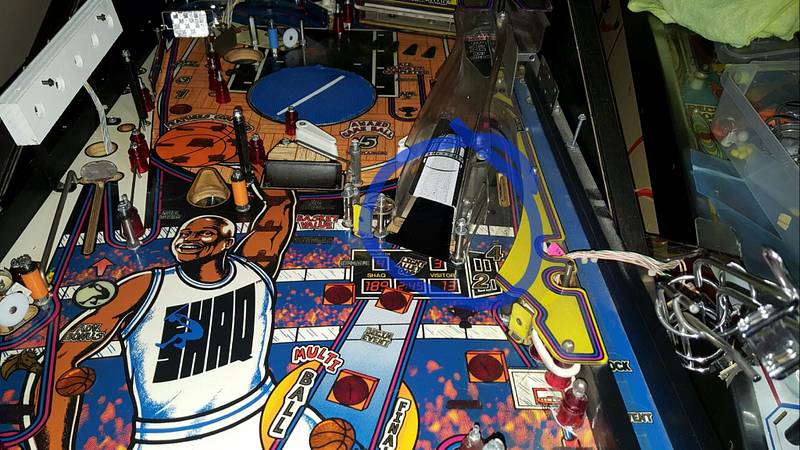 More than likely under the metal ramp piece. It's like that on Barb Wire. Remove that and see if there is anything under it.

More than likely under the metal ramp piece. It's like that on Barb Wire. Remove that and see if there is anything under it.

blowback1976 - Thank you very much! You are correct.

Hey 27dnast.... your collection isn't really that high end either so go lay down by your dish.

Damn! Wish this existed back when I owned it. It was my first pin and I've had 2 over the years, one I did a full resto and clear coat on.

Maybe I'll get a 3rd eventually...

You've got to take the entire metal scoop assembly out to get it off properly. You may as well take everything off and shop it out while you're at it

You've got to take the entire metal scoop assembly out to get it off properly. You may as well take everything off and shop it out while you're at it

Yea.... you are right. I have it pretty much all taken off now & it's cleaning up great.

27dnast - I hope you know I was just trying to be funny.... it looked negative when I re-read what I wrote to you.

Where can I find these plastic tabs that hold the lens caps over the bulbs? Thanks 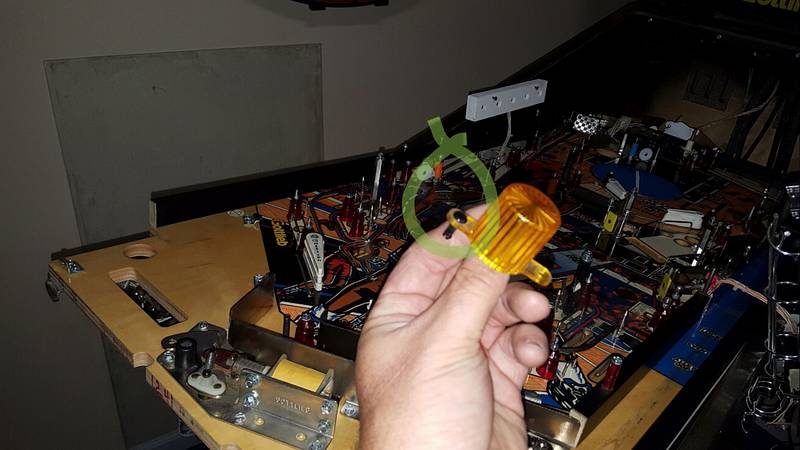 Where can I find these plastic tabs that hold the lens caps over the bulbs? Thanks

Plastic snap rivets. Gottlieb used them on thier later games:

They come in different sizes, and many other suppliers should also stock them.

Thanks guys! I just made a order with Pinball Resource. I needed a rubber kit & flipper bats also. Steve's a great guy.

I took out the screw (circled) but the flipper doesn't want to pull off. Is there something else I need to do? Thanks 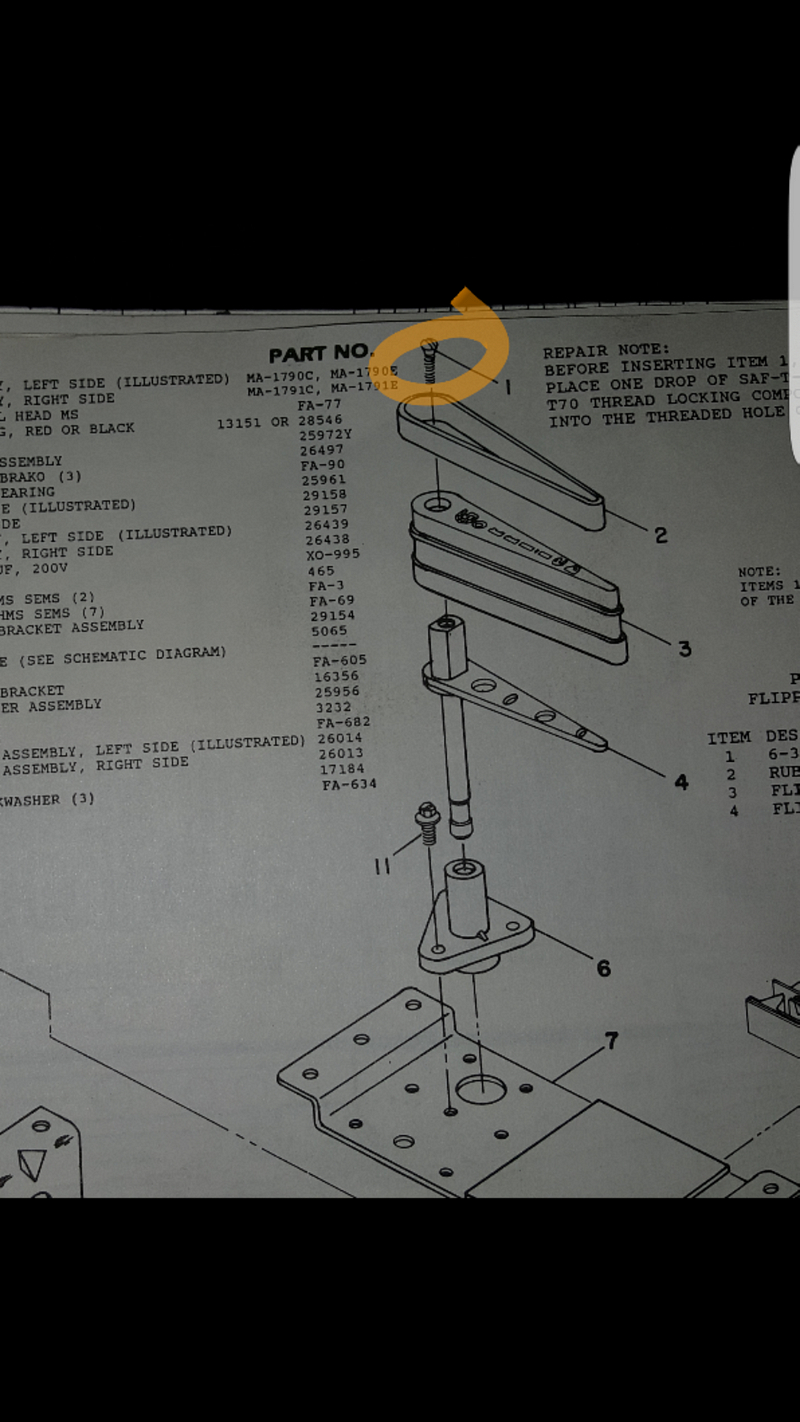 No, it's a tight fit. I remember bending the flipper shaft pulling the top off, so be careful.

Thanks blowback1976.... I just pulled harder

Now... I'm trying to decide which color flipper rubber... I put light blue for the post sleeves & orange t-molding on the backbox..... which I may change. I have orange & white Titan competition rubber but for everything else but flipper rubber I'm going to use white. 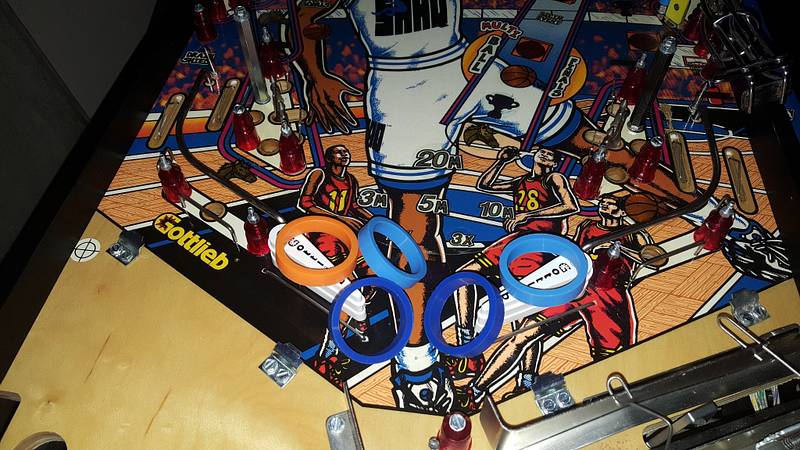 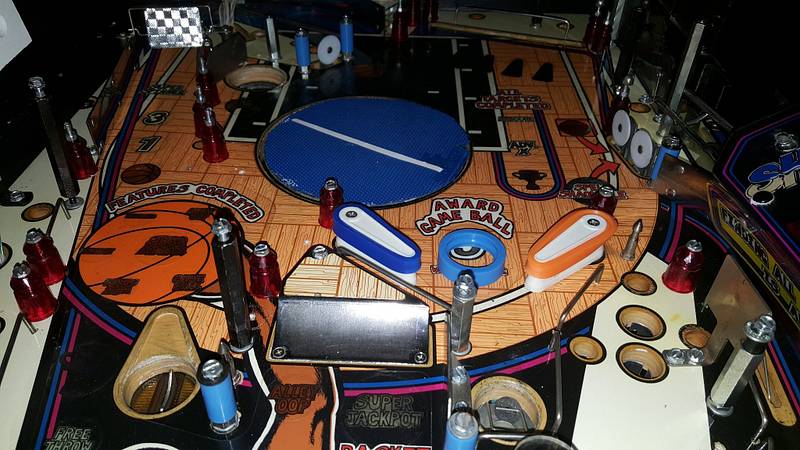 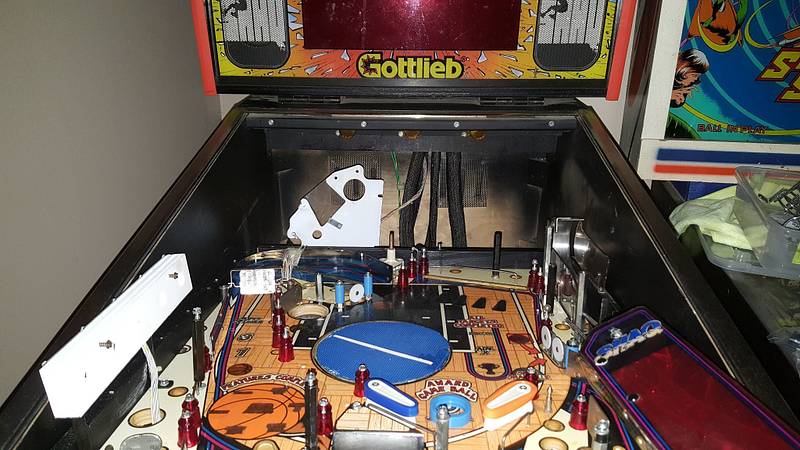 quick shout out to Collin here on Pinside....he can fix the scoreboard digits in case anyone has one that is not working properly...

anyone have his info? I need to contact him about my red led digits too

I just picked up a shaq today. I don't know why it gets such a bad rap. It's a fun game with a lot going on! I agree that the coach is super annoying. I turned him full on in the settings and will have to reverse that asap! 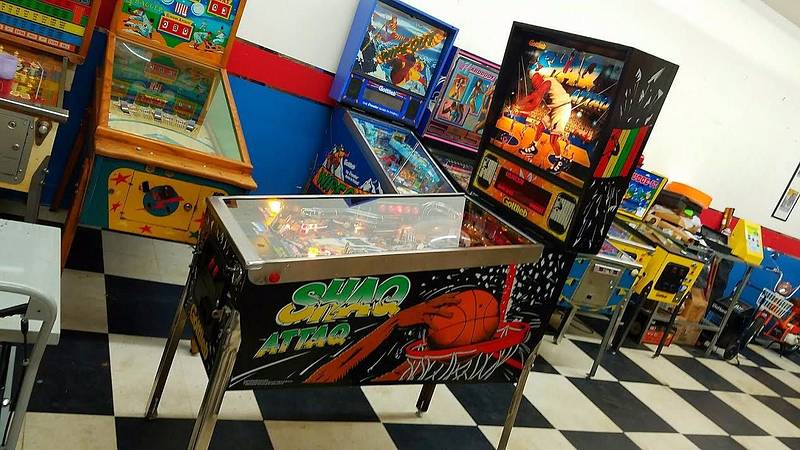 Shaq fans , I have a semi populated nos playfeld, I paid $500 from Steve Young yrs ago, Cash offers or trade ? Playfield ?