Sorry for the lengthy post, I just wanted to share what I experienced recently. I am not here to bash anybody or cause anymore issues, but rather to allow other Pinsiders to learn from my mistakes (even though I am sure most of you know this already).

I am still new to the hobby and recently bought my first game (AC/DC Pro) in early May from Great Neck Games in Mineola, NY. In an amateurish move on my part, I bought the game sight unseen based on pictures and what Great Neck described as a "completely MINT" game. Naivety, I guess.

Great Neck's communication throughout the sale was excellent. Always quick to answer any questions that I had. I had asked for pictures of the game, and I was directed to an eBay listing where they had posted the game. I was told that since I was not contacting them through email, I would get a much lower price than what was in the listing. 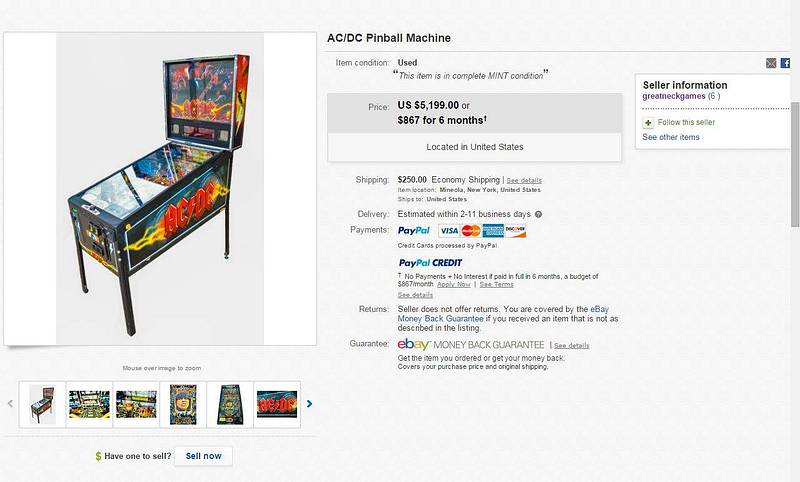 The game arrived at my house about two weeks after the transaction and was packed very well, legs were off, the head was down, everything was covered in cardboard (even had cardboard corner protectors) and everything was wrapped in plastic and on a pallet.

When I started to unpack the game I immediately started noticing issues with it. The first thing that jumped out was that there was damage to the head that had been poorly concealed with a black marker. 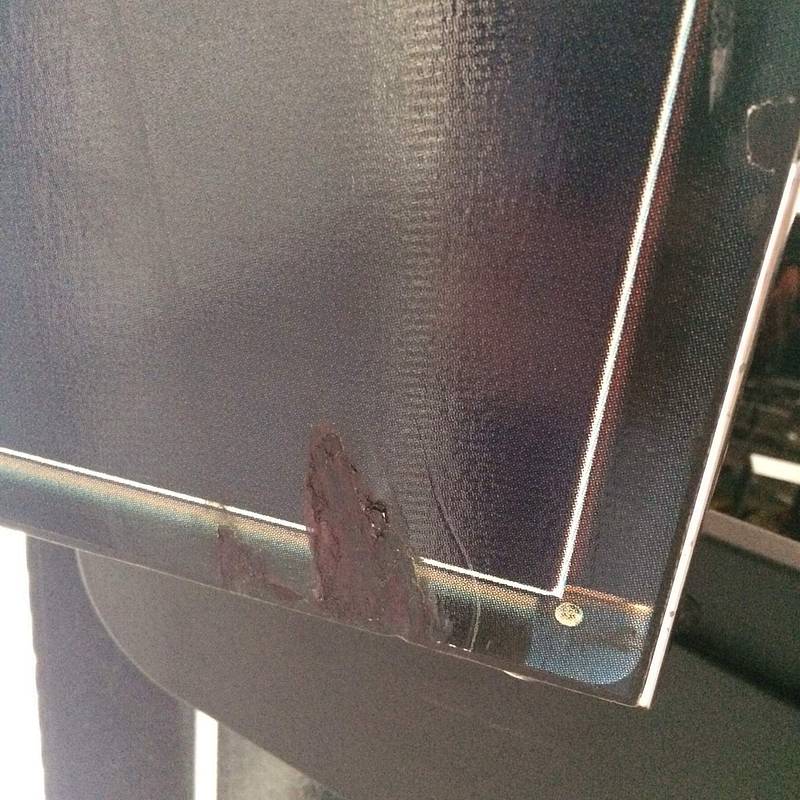 After that, I noticed that the decals at most of the legs and around the shooter rod bezel were wrinkling and the both side rails had been damaged and paint was chipping off of them. 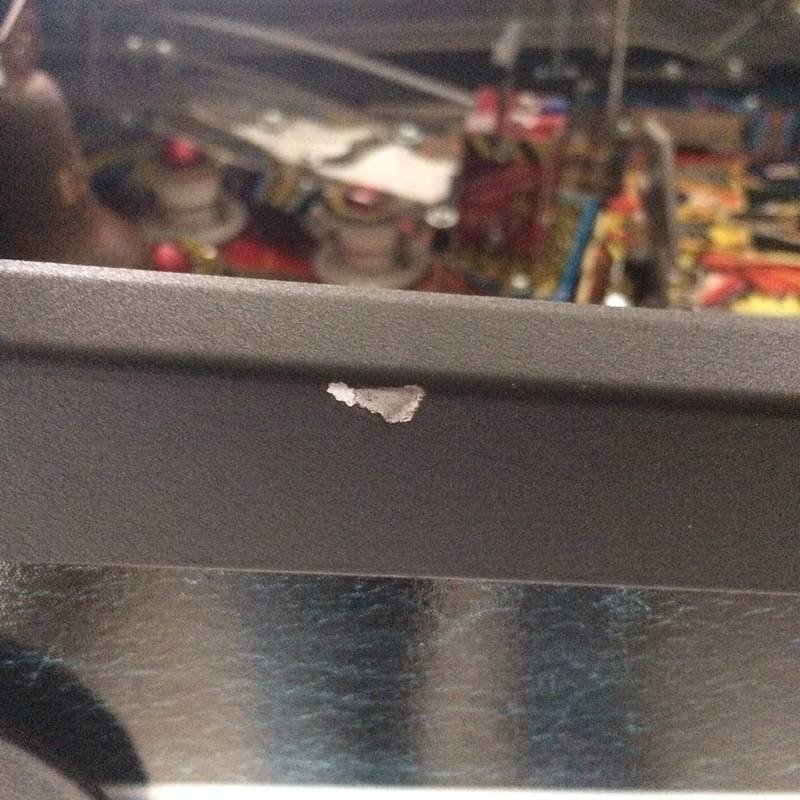 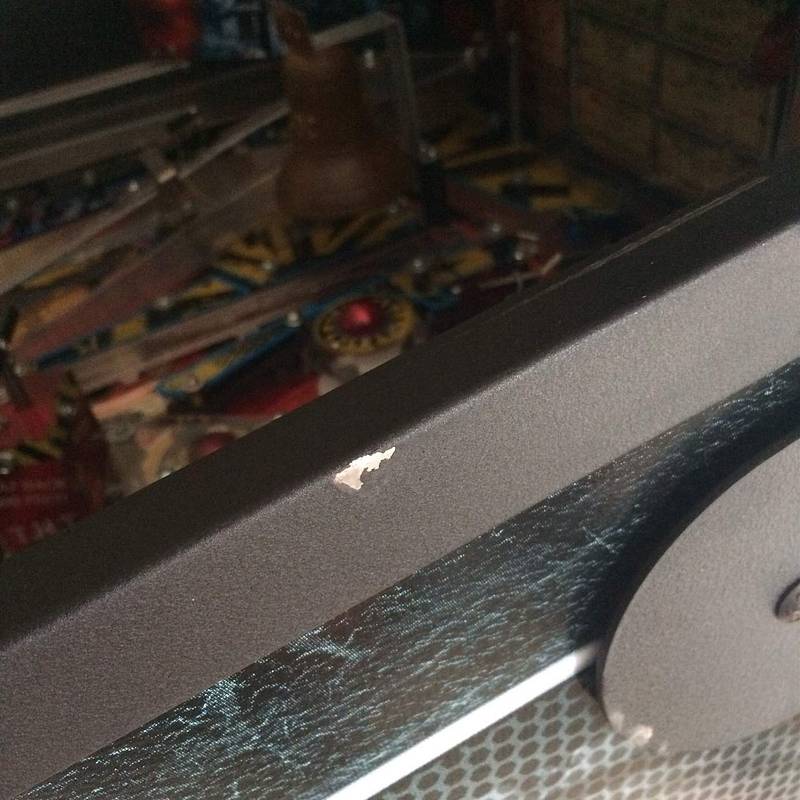 Then I looked at the playfield... it was filthy and appeared to not have ever been cleaned or waxed. I hadn't even taken the game off of the pallet yet and could already see that not only was the game not in mint condition, but it hadn't even been cared for properly.

I finished setting up the game and decide to give it a test play and see how things are operating. The game started off just as badly as the unpacking... the fire button didn't work. Luckily, I only had to adjust the switch to get it working... ok, not a huge deal, but I don't understand how somebody could use the game and say that they played it just before it shipped when the fire button doesn't even work... maybe it happened during shipping?

Finally I get to play a quick game. Very quick. As soon as the ball came to the bottom of the pops it got stuck because the rubber was broken. I tried to nudge it out, but with that rubber broken, the balls gets stuck under the plastic and the only way to get it out is to take the glass off.

Throughout the first day I find a host of other problems: missing rubbers, a broken plastic, flashers not working, bulbs burnt out, a gouge in the playfield from the factory-installed spring, and to top it off, the plunger in the cannon was broken and completely missing the nylon extension. One of the rubbers and the broken nylon piece from the plunger were completely missing, somebody had removed them from under the glass after they broke and never repaired them. This is what Great Neck Games considered mint. 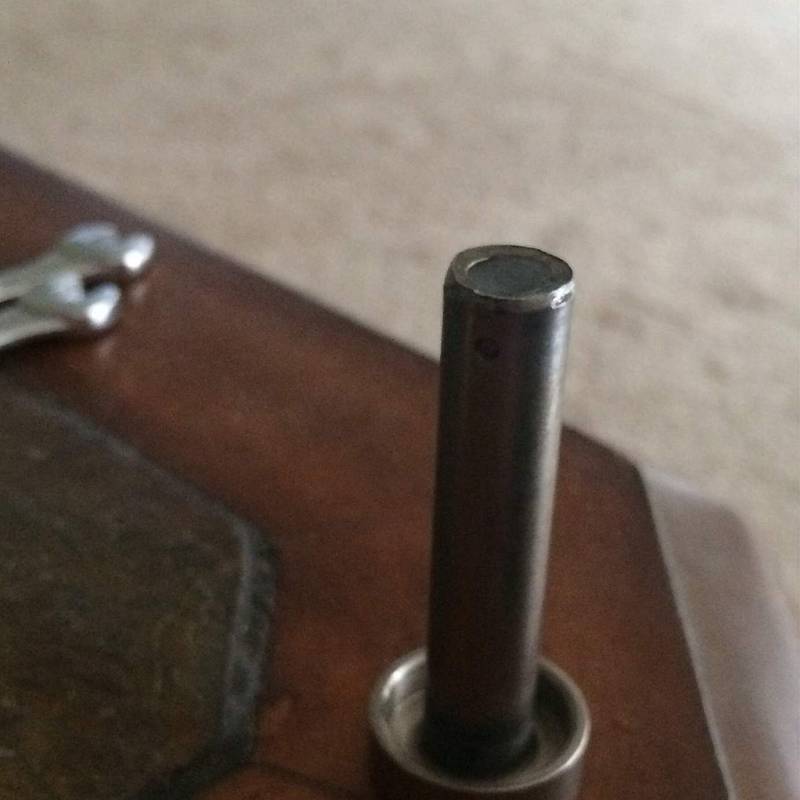 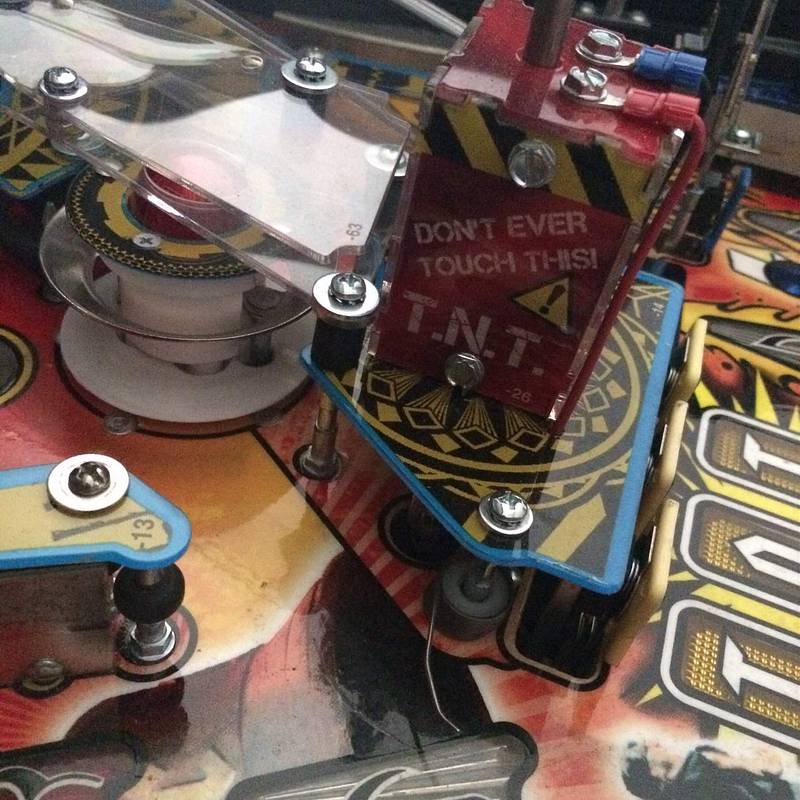 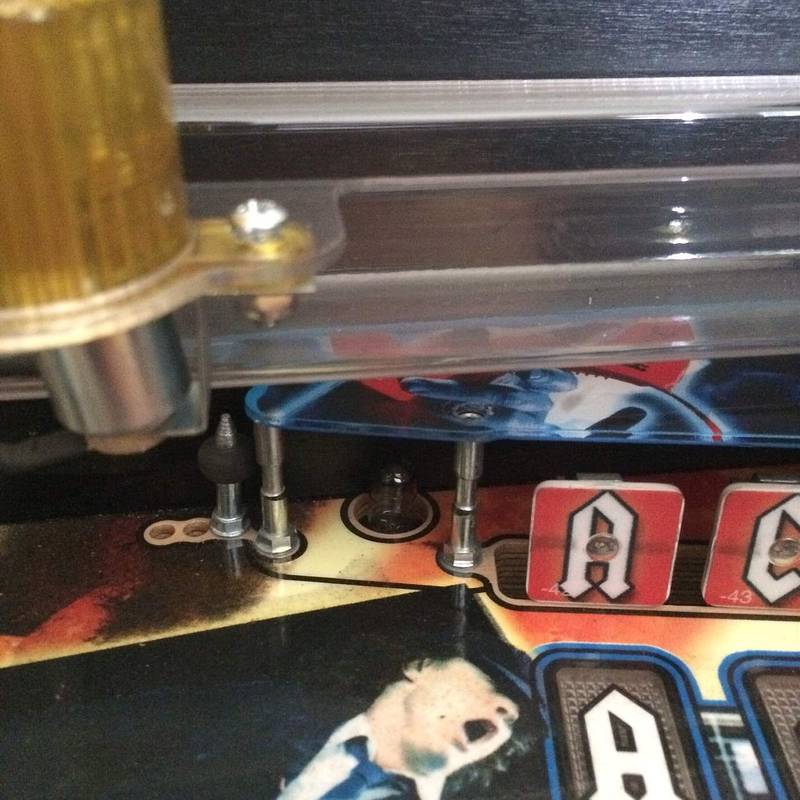 After emailing Great Neck asking why he told me the game was in mint condition and looking for a resolution to the issues, they offered to either send me a local technician out to repair the game or send me the parts so that I could it myself. A friend of mine had spare rubber so I did not need those, and Great Neck did not offer a resolution for the decals, the damaged head, or the scratched playfield. I told Great Neck to just send replacements for the broken plastic and the broken plunger and I would install them myself.

On May 18th, Great Neck said that they would check with Stern for getting replacement parts and then I never heard from them again until I posted a review on Yelp on June 26th. After I posted the review I got and email from the owner of Great Neck Games with a picture of the new plastics and telling me "maybe Yelp will help you solve any further issues you may have."

We exchanged a few emails where he said that the game was "in my opinion pretty MINT" and that the cannon was a "bad piece from Stern" and that it was "most likely nothing wrong with the piece but needs to be re secured inside" even though I had already sent him the picture of the part that showed the extension missing and the metal deformed. He told me that after he ordered the parts, he forgot about me, which I understand can happen, but him receiving the ordered parts should have been a reminder.

I let him know that me posting a review was only to let other potential buyers be aware of my experience and not to make the same mistakes I did. I told him that he is the only person who has the ability to turn a negative experience into a more positive one, he told me that he has no interest in trying and cut off communication.

Is it wrong that when I hear someone uses the word "Mint," I automatically assume they don't know their game. Maybe I'm a little OCD, but I do my best to talk about any flaw I'm aware of. I'm sorry for your experience and hope you're done right.

Sorry you had a bad experience, but your review will be helpful to others. I will avoid Great Neck Games in the future.

"Mint" is, unfortunately, one of the most misused adjectives in this hobby.

Did you smell it? Maybe he "minted" it? 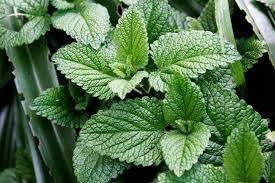 I sold 3 used AC/DC pro's that were in very good used condition over the last 2 years. Much better condition than that one sold as mint condition. I would of considered that pin in the fair to good category.

This is exactly why I will never ship games. If I can't see it in person first its not worth the trouble to me. Guy sounds like a real asshole. I mean he seriously forgot about you? Imo he never intended on fixing anything and just hoped you would go away.

Thanks for the info. I got screwed a bit myself on my one and only pinball eBay deal. I was admittedly a newbie and lacking the knowledge I know now so I blame myself....but I did feel a bit taken advantage of. Ah well....live and learn scenario.

I will give him some credit in that he did contact a tech that was local to me and he did order the parts (he was kind enough to send me a picture of one of the parts when he told me he wasn't going to help), but to me, that still doesn't excuse the misrepresentation of the game's condition. I do think that he hoped I would go away though since he never contacted me to tell that the parts arrived.

At least I know now for my next game...