Crue, why anyone would release Rush is a very questionable and quite poor research...
But I reckon the license is dirt cheap.
Loads of bands that should get a treatment before a virtually unknown band like Rush.
Van Halen, Queen etc... Even more modern stuff like Rammstein would sell way better.

This is the wrongest thing anyone has ever said on Earth.

You do some research. You’ll realize Rush fans are ultra passionate 45-60 white male nerds with money….aka the exact person who would buy a pinball machine based on a theme they love.

Rush is also worshipped by every rock musician & actors like Jack Black and Pail Rudd. More rich guys with room for pins.

Rush pinball doesn’t need to appeal to millions…just a few thousand Rush fans will make it a success for Stern.

Crue is currently more popular than Rush, according to sales/downloads. I don’t really care much for either though.

Sales/downloads just tell you if someone wants to listen to a song. It doesn’t tell you about a fanbase’s passion. Crue has some fun songs - does anyone LOVE them so much they want a pin of them in their house? No. Rush fans have a deep emotional attachment to the band.

Let’s look at the best selling rock pins: AC/DC & Metallica. Massively passionate fanbases, who would have loved a 90s pin, but it never existed. Those pins filled a desire for those fans. Rush will be the same way. For me, AC/DC Metallica & Rush will be my music pin trilogy.

I honestly think either one of the two would sell well.

In this market, even an Insane Clown Posse pin would sell well.

Yes, Yes, & Yes. The passion for cock rock on Pinside is rock hard.

Well, if Crue has a passionate fanbase that would be into pins - cool. The bottom line with any music pin is it’s going to appeal specifically to fans of that band and turn off anyone not into that music…and that’s fine - a pin that sells a thousand or so is enough of a hit to be worth making. It doesn’t have to appeal to millions. Another game in the “catalogue” of in-production games to keep the factory churning.

He’s not. He always fails to understand pop culture & fanbases that he’s unaware of. Just because things are outside of a personal bubble of knowledge doesn't mean they don’t exist. He didn’t know what R&M was, dismissing that it’s one of the biggest shows with a rabid fanbase….he thought Halloween wouldn’t sell, dismissing the huge horror fan world.

It’s weird that someone who wants to blow Slash doesn’t understand the passionate fanbase of bands.

It’s cool to not like a band. It’s ignorant to dismiss the success of Rush, their influence, and their fans.

I guess I just don’t find myself on a crusade looking to evangelize people about it, or ‘demand respect’ for them. They don’t need anyone to do so.

It’s not even that. You’ve got certain people
who think Rush would be a terrible theme for a pin after tons of 70s/80s bands have had pins. Rush fits right in to pinball as well as any classic rock band has. If it’s not your thing, move along…but understand many many people are going to be thrilled, and it will sell.

I found one! She might be related to Geddy, tho

LOL! I'd love to see the Crue attempt La Villa Strangiato.
(Full disclosure: I love Looks That Kill and Dr. Feelgood. Oh, and Live Wire. And Girls, Girls, Girls. And...)

Fun fact - the music on CrueBall for Sega Genesis was done by BK2K’s Brian Schmidt. Sounds like a cross between Crue & BK2K!

Don't know who the F#ck Rush is, and not going to google to find out!

Your loss. To exist in the same time as Rush & to actively try to never enjoy them is a crime against the universe.

Oh you're right about him not understanding things hes not into but he's mostly right about rush being a bad theme . I just think most rush music doesn't lend itself well to the kinetics of pinball. I feel the same way about Zep though and they made that game so what do I know. I'd rather have rush than zep any day

I think many songs are perfect for pinball. Imagine hitting start and hearing the opening riff of Spirit of Radio…then hitting launch blows you into the song. I think there are clever ways you can edit the music to really punch up the pinball moments, similar to the way Metallica does in some ways.

Wow, it’s not a landslide like K-man thought…what up Bro. You’re watching….

…and it’s possible that the Crue votes are just anti-Rush votes & not actually buyers of a Crue pin. A more accurate poll would just be “Would you buy a Rush pin?” Yes or No.

Someone should start a poll for some of the pins K thinks would be better than Rush: Spice Girls, Madonna, Michael Jackson. Let’s see how well those fare around here lol

You just need to listen to better music mate
Try Queen for starters!

Why do you assume I don’t listen to Queen? Queen is great. How are you qualified to judge what’s “better” if you’ve never heard Rush?

It’s possible to listen to & enjoy lots of bands. Lol

Maybe in America it would, But not in Australia!
I would bet my house on it!!!!!
BTW how many sales did ACDC get?
Sure more sales than Rush will ever get.

AC/DC sold great. So did Metallica. Other music pins? Not as well, but they still made them & will continue to make more. As long as they sell out LEs, any sales after that are gravy.

Exactly how do you know if you never heard the music.They usually dont play Rush on the same station you hear olivia newton john.

Oh, I thought you were the guy who said he’d never heard of them and wouldn’t Google them.

1974 lol, the thing with Rush is there’s virtually no generational carryover, you’d be hard pressed to find anyone under 30 who has heard of them. My kids 18 and 26 had some friends over last night and not 1 had heard of Rush. Everyone knew who Motley Crue was.

Some kids are cooler than yours.

Haha, Rush is the ultimate nerd band.
Growing up, wearing a Rush shirt was like wearing chick repellent.

Who listens to rush? Who is rush? Name a band member. Then name a song. I got nuthin....

You’ve heard these songs, even by accident.

Not in Australia! Rush is as popular as a redheaded stepchild down here

Well, consider it a nice break, then. Australian pinball fans must be going broke if they want every single title!

. The nicest thing I can say is it’s very of it’s time , nobody listens to that now right ???

Primus fans are listening to it now

…and six days ago, this French girl had her MIND BLOWN!!!

I think that is a pretty spot on assessment, I think Rush isn’t universally loved is because a lot of people, myself included, detest Geddy Lee’s voice/singing style.

How do you detest the voice of an Angel?

I am confused by all of this love for Rush. I loved Rush back in the 90’s - I probably played Chronicles more than any other cd’s…. Ever. Even then Rush was more of a fringe band. I just can’t believe there is enough interest in them to become a pin. I loved them 30 years ago, but I have no interest in a Rush pin.

Honestly, I’m similar - I’m not an ultra super mega fan (although I do know plenty). I didn’t buy any of their albums after Counterparts (mid 90s?)…hell, I just fucked up and called Alex Eric lol …but, I still
love them, their sound, their spirit, their talent…Spirit of Radio is probably my favorite song ever. When it comes to music pins, I think of bands that should have had pins made in the 90s, but didn’t. That’s why I thInk AC/DC & Met are so cool. For me, Rush fits with those two as a band that should have had a 90s pin.

Lots of young Youtubers listening to Rush for the first time lately!

Except those videos really don't have many views. The first one is at 120k after 7 months... the last one hasn't hit 2k. If anything it shows that there really isn't much interest.

Not really the point. I think it’s interesting to see young people experience something for the first time that I’ve heard or seen a billion times.

I threw a 3-day “Would you buy a Rush pin” poll up on the Rush Reddit. Obviously not scientific or anything, but a think a solid number for the Rush fans who happened to be reading Reddit on those specific days.

Maybe I should try one in the Crue Reddit. 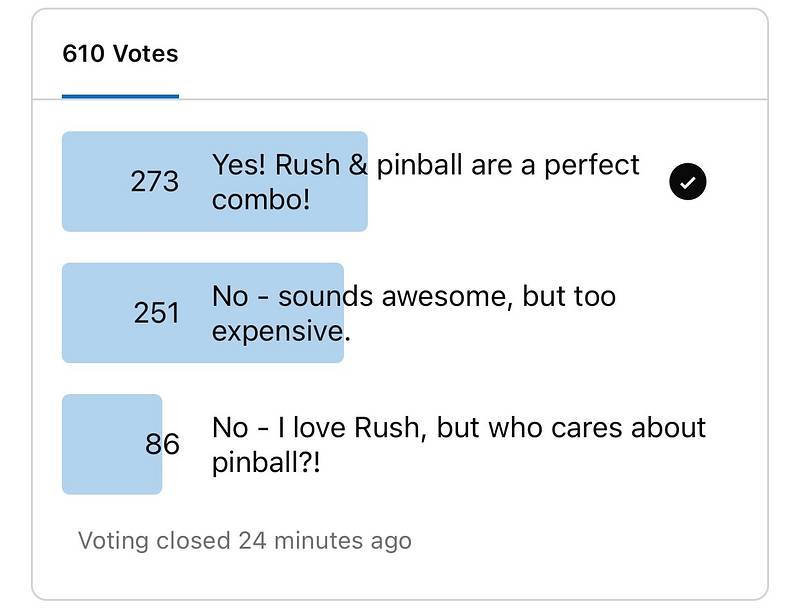 I hope there’s a “Time Stand Still” magnet, and you just hear Aimee Mann’s vocal every time it grabs the ball haha

It's never been about how popular they are. It's about how many pins need to be sold to be considered a success, and how many Rush fans would buy a Rush pin. The demographic intersects. Comparing record sales, radio play, ticket sales to other bands is irrelevant. Rolling Stones, Aerosmith, Beatles are all "bigger" than Rush. I guarantee Rush sells more pins than those. They don't need to sell millions. Only few thousand. Easily a few thousand Rush fans that will NEED this pin.

But let me ask you this: How many diehard Motley Crue fans do you know of, who are loud and proud about how it's the best band ever and their absolute favorite?

There are more Rush fans nerding out on Reddit compared to Crue fans. 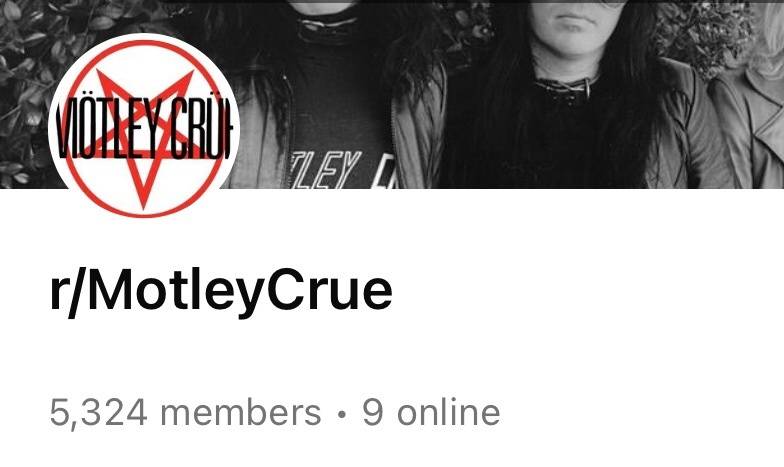 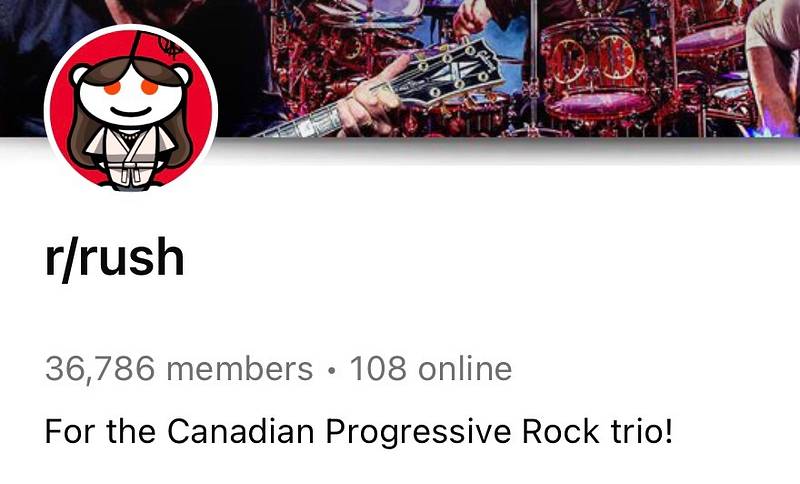