Can someone help me improve my schematic reading skills? I've reproduced a snippet of a Miami Beach schematic having to do with how the spotting disc influences extra balls. I've got a bunch of uncertainty about this diagram. Here goes:

What does "run to top" mean?

In the mixer #3 rectangle there appears to be a "1" in the 9 o'clock position. Either that or it's a vertical slash. What does it mean?

Thanks for helping me go deeper. 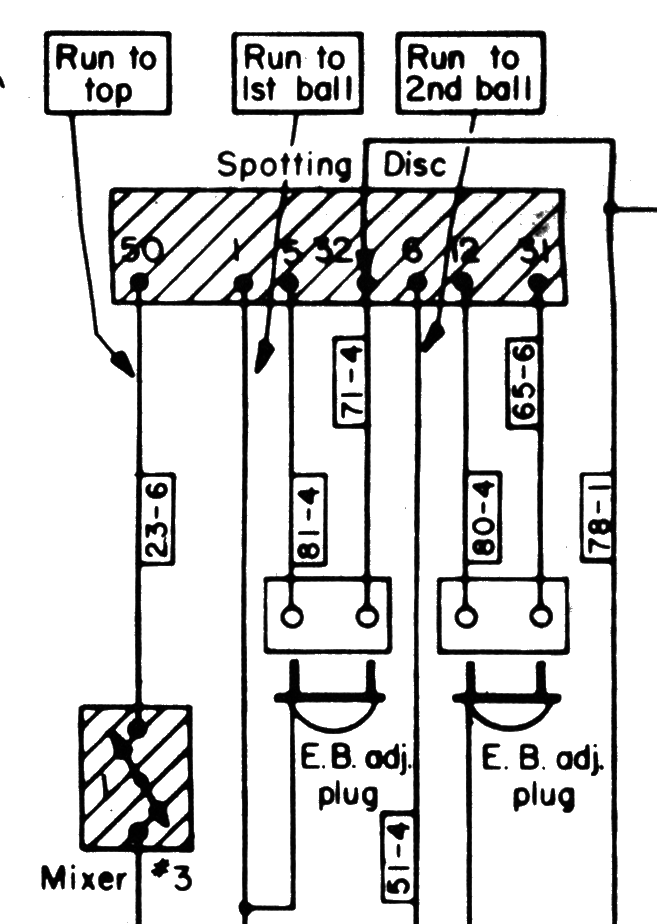 I believe indicates which rivet number. For example: if the first position is #1 and the fiftieth position is #50 as the wiper moves around it.

I believe that "run to top" means that if it lands on that rivet, it will run the odds to the top value.

Run to 1st Ball will run the first extra ball all the way to award a ball. Same for 2nd EB. Instead of requiring you to earn each step individually.

I believe indicates which rivet number.

I believe that "run to top" means that if it lands on that rivet, it will run the odds to the top value.

This particular snippet is for the EBs - so run to top means you're awarded all three if the mixer #3 is in the appropriate position along with the spotting disc.

Run to 1st does award 1-4 steps on the EB unit depending on the initial position.

The EB adjustment - you have the ability to connect an additional two or four wires in the liberal position. These wires connect to specific rivets on the spotting disc. If you have the liberal adjustment, you have (up to) two more positions to grant the runs to 1st or 2nd EB.

Can someone help me improve my schematic reading skills?

unfortunately, the numbers don't necessarily mean anything useful with the information we have. They are actually the number bally assigned to the wire lug on the engineering blueprint of the contact plate. That number was also used on the rivets that were connected to the lug as a label ... dunno why on some drawings in the manuals (not yours...you don't have a spotting disc diagram - lucky you) they decided to cram the wire id directly on the rivets - up to 5 characters needed instead of typically 2.

problem is, the numbering isn't necessarily sequential around the contact plate. Some games the numbering bounced around, there were gaps, letters were used, etc.

so while the schematic is right in that lug 50 had wire 23-6 on it, that may not tell you which lug on the plate is 50. It definitely won't tell you which/how many rivets are connected lug 50.

so just ignore the numbers in those boxes.

later games had the spotting disc diagram in the manual, and the guy who provided the mixer blueprints for Miami beach is taking a look at making the diagram for the spotting disc ... that means figuring out a few hundred rivets, so it may not be feasible.

on a tangent (because I can't stop myself), you may be amused to look at the single-step circuit for the extra balls...if you have the diagram in the manual. On most games, you cannot single-step to get the ball, you can only single-step to light the first two panels for each ball. That's how bally controlled the odds - you must get the ball via the run-to circuit. Having "extra" lit just made you think you were "closer".