Rarest game you own?

I'm talking anything with a production number under 1k.

Mine is an El Dorado and the City of Gold. According to IPDB, it had a run of 905 units. The layout is like Target Alpha, El Dorado and Canada Dry but in a solid state version....

I know sometimes low numbers equate to a crappy pin, hence why they're low , but I have to admit I thoroughly enjoy this guy....

Two pins for sale I have looked at but decided not to purchase because of low production numbers are:

Both were in really nice shape, but not worth the asking price, and good luck getting replacement plastics/playfield parts if anything breaks.

With a production run of 2705 units, Swords of Fury isn't necessarily rare, but you don't see them around much. I think a lot of them were exported to Europe. What's amazing is that there is actually a full set of repro plastics available for it. I guess someone over at CPR was a big fan of the artwork.

Only time I see Swords of Fury, is when it makes it rare appearance at shows. Its possibly one of my favorite pins, as far as 80's era artwork goes. Not a whole lot of medieval fantasy themed pins outisde of MM, beyond the classics from early solid-state.

I was lucky enough to play Lost in Space, when it was on location for its release. Very cool pin, especially as far as Sega's go. That magnet effect they use to spin all the pinballs (around on a spinner) before multiball starts, always gets me.

I wish I could have found the owner of the Spirit, and asked him about the story behind his machine, which I saw at Pacific Pinball Expo 2009. A very rare beast.

I own an atari airborne avenger: steve R's first design. only 350 made

I wish I could have found the owner of the Spirit, and asked him about the story behind his machine, which I saw at Pinball Expo. A very rare beast.

AHHH... My dream machine!!!! What year was that at Expo? Don't recall seeing one the last couple of years....

I just picked up a NGG early production run with all red Light boards on the bottom of the playfield. I guess maybe thats kinda rare.

I own a HUO MM. rare to find a huo

tatman is that the one you want to sell me?

I have 'TEAM ONE' a low production add a ball,
unfortunately not a lot of pinballers digg add a balls?

I have a Bell Fantasy, It's a great looking centaur clone from the late 80's. only 250 kits made at most and most didn't make it into games I believe. I guess that must be pretty rare. It is rough but restorable.

I have owned Laser war and Transporter in the past. Both VERY fun games. Laser war is an amazing game in my opinion. I have a friend who has my old one and it still gets lots of play. Checkout my profile for stories about both games. Lost in space is eerrrr not so good. Godzilla was the best of the low production Sega games in my opinion.
I still have a few laser war spares.

ooh I forgot I still own Torpedo Alley which I guess is pretty rare.

Coasterguy yes that's the one I am going to sell you.

emo, What spares you do you have for Laser war, I'd be interested if your willing to sell them.

Emo, you didn't chime in on "worst artwork" post!!!

Seriously though Emo, how is the gameplay on Torpedo Alley? I only played it on pinmame and when know how that is.....

My TZ is an early sample with a green lock insert and no "FLIP HERE" printed on the mini-playfield. I don't think they made more than a couple hundred of these.

Champion Pub or NGG, I guess the Pub has the lowest numbers, now just need to the Pub working again.

Laser War Spares, from memory I have a complete new plastic set and ramp. I should mention that I'm based in the UK though if your interested in them.

Torpedo Alley is a fun game. I agree about the art but how can you take that art seriously heehee. Those early DE games are really good fun.
The rules were a bit like LW as they are easy to understand. It is also a bit harder and the balls drain faster, especially in multiball but I like it a lot. I bought it because David Theil (sound guru) suggested that I try to find one as I liked Laser Wars. I'm glad he did.
It gets a good press here in the UK and I have lots of offers to buy it but obviously if you compared it to a modern game it is very limited. To sum up if you don't take it seriously its fun with nice lights, nice sounds and a nice game to own.
I find the early DE games like Laser War smoother than later DE games for some reason.
I am missing one plastic, most annoying.

I would be interested in the Plastics, as I just bought a full display set from over there, as one of mine is bad. Let me know if you want to part with it.

I have a double wide body Gottlieb Star Race pin that is fantastic. Only 870 produced, but only 650 of them made went out to general public and is one of only two wide body pins produced by Gottlieb. I have never been able to find out why the whole production run did not make it to the general public, but got this info online a few years ago.

Im getting a cybernuat in today, It shows the numbers at 900. Ive played it on vp but have never seen it otherwise.

Hi,
I've got a "Spectrum" (Bally) from mastermind lovers.

And a "Schuss" rally france fliptronics: less than 100copies, 1968: one of the first with a sound card, nixies tube displays, illuminated posts. 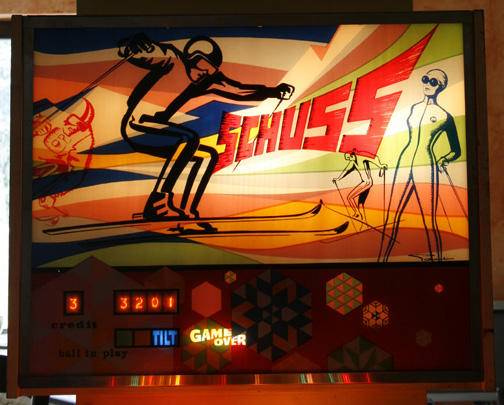 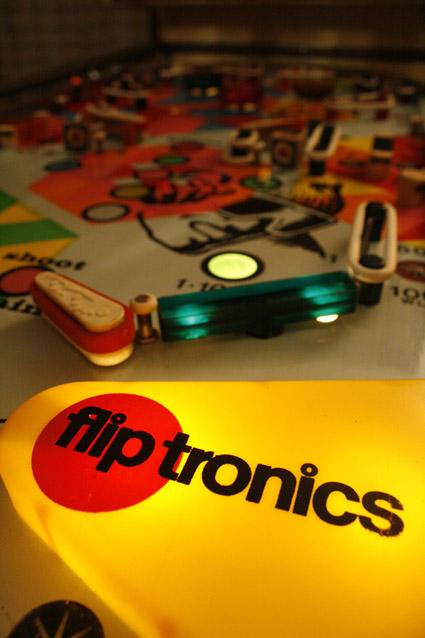 I've got a "Spectrum" (Bally) from mastermind lovers.

I've always wanted to play a Spectrum. Seems like an incredibly unique game.

That Spectrum machine is indeed different, I have never seen one... Very cool!

The rarest games I owned are no longer mine. One went to a collector in Germany. The other one went to a Chicago museum.

The rarest games I owned are no longer mine. One went to a collector in Germany. The other one went to a Chicago museum.

Do your recall some of them BD?

The collector got the Bally Rocket machine. The museum got an old bagatelle.

Spectrum makes yearly vists at the pinball shows here. Its one of the coolest to look at (artwise), thats for sure.

I have a early example Circus Voltair not sure how many were made.

The spectrum is a cool looking game.

robin will you change the number on units here on pinside?

in the past would have been night moves cocktail. I think they made only a few hundred. or SMB: MW

rarest currently I think is Black Rose as far as production numbers go.

GnR has two different 6-ball multi-ball modes. The normal multi-ball by adding band members & Riot Multi-ball once you have completed all the guitar modes.

smassa yeah I know...but during the multiball are there 6 balls flying around or just 5 with the extra 6th captive ball? I'm tryin' to figure out either there's a missing ball in my machine

Spectrum, definatley different and has a cool look. One of the few games I don't like to play much though-espcially as I bombed out of a competition playing it recently.
I can't be bothered with all that "ball kicking out business" and having to think. I prefer my pinball to be mindless fun heh.
Each to their own!

@ Lorenz... That Schuss pin is way too cool. I would love to have cause that's my nickname! Anyway you can get videos of that in action?

@Emo... That's why I love Spectrum - full of drops! I also like it for it's pin precision shots.... I think that's why it deters people. You can't really get away with shooting thing at random.....

Schusler: interesting candidate; I have the lower-production AAB wedgehead version, Gold Strike. (675 made) For modern games (I don't have many pins, but) the rarest is probably Lost World. Not sure of the production, but probably under 3k like several Sega pins of that time.

Defender is being delivered to my buddy's house today and I'll pick it up next month. 1 of 369.

The only semi-rare one I have is Pinball Magic, 1200 made.

my batman Forever is one of 2500. Not terribly rare but it is MY rarest. You don't see it a lot and it is a blast to play!

We have a prototype Cirqus, a prototype SS, and a Creature with the translight signed by the guy who played him in the movie. All very cool.

I have a Gottlieb Rock Encore, IPDB lists 245 confirmed but most were upgrade kits - I have the dedicated cabinet version so who really knows???