So I had a couple of lights on my “new“ quick draw playfield that were flickering, so I went through and did the “Clay’s” method of putting a drop of solder between the socket and base of the light, and then also one on the “tip” of the socket to attach the wire. This worked well.

There was one remaining light, pictured below, and because it has four wires going to it I decided to first only put a drop of solder on the socket — Just to see if that would solve the problem without me having to unsolder and resolder the four wires.

So I fire the game up and THAT light works great and NONE of the other lights on the playfield work at all?! So obviously I’ve created some sort of short circuit just through that bulb. How do I resolve? Obviously, I can just take that blob of solder back off, but the socket will go back to flickering. Which wires do I need to move?

Edited to add a lighter photo for easier viewing: 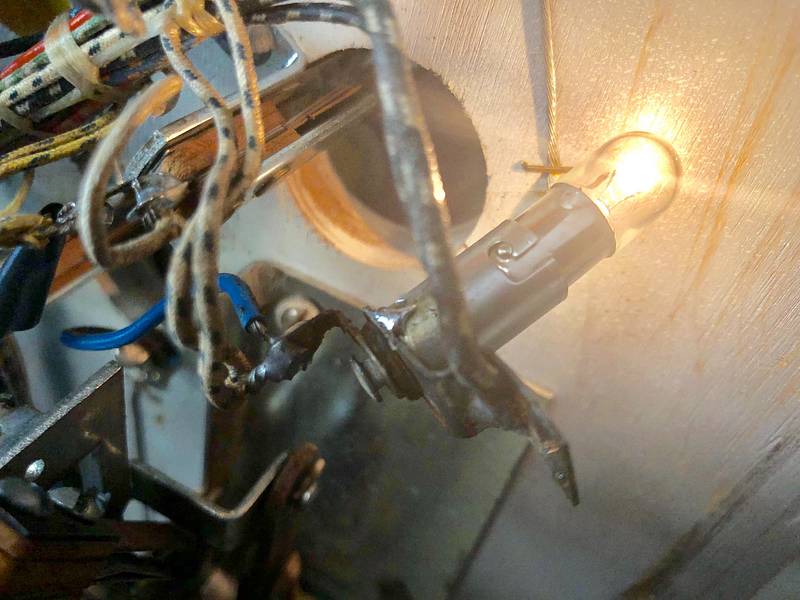 So obviously I’ve created some sort of short circuit just through that bulb.

A short would light the others or blow a fuse.

A break would cut power to some of them.

You made a good connection poor.

A short would light the others or blow a fuse.
A break would cut power to some of them.
You made a good connection poor.
LTG : )

I guess I understand in part, but I’m not sure what I should do. I did not touch the wires at all – neither the two attached to the “Tit”, nor the two attached to the base. All I did was solder the base to the bulb socket. So if I reverse what I did, I guess the rest of the playfield will work and I will just have to live with the flickering bulb?

It seems like, per Clay’s method, that I should be able to keep that blob of solder where it is. And then maybe the problem is that I did not move one or both of the sets of double wires to the “tip“ of the bulb? Secondarily, related, I don’t really understand why this socket (and some others in games) have four wires going to them instead of one. Perhaps that has something to do with the issue here?

So if I reverse what I did,

You working in there may have created the issue.

Use a jumper wire and go from working bulb to non working bulb ( jump across wires of the same color ) and figure out which one doesn't have continuity.

Strange. What happens if you remove the bulb from the socket when powered?

I figured it out, guys. Once again, I’m an idiot.

I had not soldered it back into the ground braid, and that caused the issue. Works fine now.