Those would have been even more cost effective and simple to power directly from the GI circuit.
My next game to do is Metallica Pro. For Metallica I want the ability to set the white and RGB colors using an app on my phone as is possible with the PinStadium kit to a specific color shade and brightness to ensure the best possible effect on the amazing playfield art.
I already ordered a separate Bluetooth controller module and RGB + White led strips for this, but now see I could probably have saved a bunch of $ and used one of these instead: ebay.com link » App Bluetooth Rgb Led Light Strip Brand New 6 6ft Dc 5v Usb Plug 16 Million
I'm not sure how well a straight RGB strip would do vs. a RGB W strip (with dedicated white LEDs intermixed with the RGB ones) though, I suspect it would be better with RGBW LEDs.
I do want to preserve the "Fade to Black" GI fading/blackout effect if at all possible when adding these. I wonder if powering the bluetooth module + strip from the GI directly would work to have them turn of when the GI does? That would be a simple fix.
Alternatively, I also have a Pinduino kit for my Metallica that I am investigating to see if there might be a way I could run the stadium GI LEDs off of that would integrate with the built-in GI fading, etc.

I've been using the RGB+W for home lighting and really like it (personally, using warm white as I like it for night time lighting better than cooler whites). The RGB mix to white has variation based on the manufacture -- sometimes more blue, sometimes more pink. Otherwise, I've been wanting to do something similar with the pinduino. As you know from the Metallica kit, the idea is very similar, but that I had it set with the LEDs along the apron and backboard. You can easily change make a set for the sides and update the Metallica code with however many LEDs are being used in one strip. Also, since the Metallica code is only using one LED port on the pinduino, you can use the second LED port to power side lighting (and have different effects.) If you go that route, feel free to give me a call and I can help you with the programming.

Tres, your work on this is fantastic.

Could you share details on the "simple circuit" that can be used to make the 12v leds work with the GI effects?

I received a PM asking a valid question, how do you power these 5V DC LED bars from the 6.3v AC GI lights?

Note that the output is 600mA at 5V, which is enough to drive 30 single color LEDs

I don't think that has a bridge rectifier to covert AC to D.C. It is just a pass through to a USB port so you need to supply 5VDC to it.

Since most of the Ebay stuff is USB - wouldn't this work if you ran a wire from the coin door lights (always on when the game is on - 6.3V) to the female USD breakout mounted on the inside of the cabinet then you would have a couple quick disconnects for the LED strips in the cabinet - all easily wired in. None of this is expensive it is easy and I found the wiring diagram (we would not use data) just the power.

If people are looking to power these things, it is probably best to pull power from the AUX port on Stern/DE/Sega games, or add an external power supply (e.g., ebay.com link: 5V 12V 24V DC AC 1A 10A 30A 50A 70A Switching Power Supply Adapter For LED Strip)

The only reason why powering from the GI might be preferable is that you get the stadium lighting turning off when the GI is switched off. That can also be accomplished with an external power supply by using a transistor that is controlled by the GI (via a bridge rectifier) to drive the current to the stadium lighting (much in the same way the solenoids and flashers work).

I * finally* made a kit for my Dialed In using a pinduino. Thanks to

Tres for doing the first one with the pinduio. Source is available (open source): https://github.com/elyons/professor_pinball_pinduino_sketches/tree/master/Dialed-In_Side-Lights

If three people are interested, I'll write up a DIY for how this is done. Just quote this and say "Please do".

I’d love a writeup on this, but probably needs a thread of its own (linked to from this one).

Fytr. Two more and I'll do a write up like this: https://pinside.com/pinball/forum/topic/diy-guide-to-adding-backbox-lights-to-dialed-in

Nepi23. That makes three. I'll get to work. These take a good amount of time make, so it is good to know that there are people who are interested.

Step-by-step DIY instructions for side lighting is now up: https://pinside.com/pinball/forum/topic/diy-cabinet-side-aka-stadium-lighting. This will work for any type of LEDs.

Step-by-step DIY instructions for side lighting is now up: https://pinside.com/pinball/forum/topic/diy-cabinet-side-aka-stadium-lighting. This will work for any type of LEDs.

If you talk about poor men's stadium lighting take 8 old lamp holders.
Then paint them black, put some very bright leds in them and place them around the playfield.
They flash on and off with the GI (The apron has also leds under the graphics).
Below picture is made in the dark.
Welll.... cheaper than this is imposible.

Nice work, but sometimes you need to buy a spot housing to keep the throw of light out of the player's eyes (e.g., https://www.pinballlife.com/index.php?p=product&id=295). That is $2, plus another $1 if you need the socket (https://www.pinballlife.com/index.php?p=product&id=294). Together with a super bright LED, each spotlight will run about $4 (plus shipping). If you are adding 8 of them, you also have a lot of time into soldering wires, adding plugs if you want to make them easily removable, etc., and the total cost can quickly reach $40-$50.

I knew that was an option but not really what I want to do, just not reversible easily.

You can easily connect an external power supply to the AC plug used to power bill acceptors on many pinball machines. The power to that plug is controlled by the power switch of the game. If you want a DIY writeup, just let me know.

I'll get one photographed and written up.

Just added a setup to No Good Gofers. Rather than using angle brackets to hold the LEDs, I attached them to the ramps and pointed them towards the middle of the playfield. Very easy to do and works great! Of course, these are controlled by a pinduino for interactive lighting effects during gameplay. 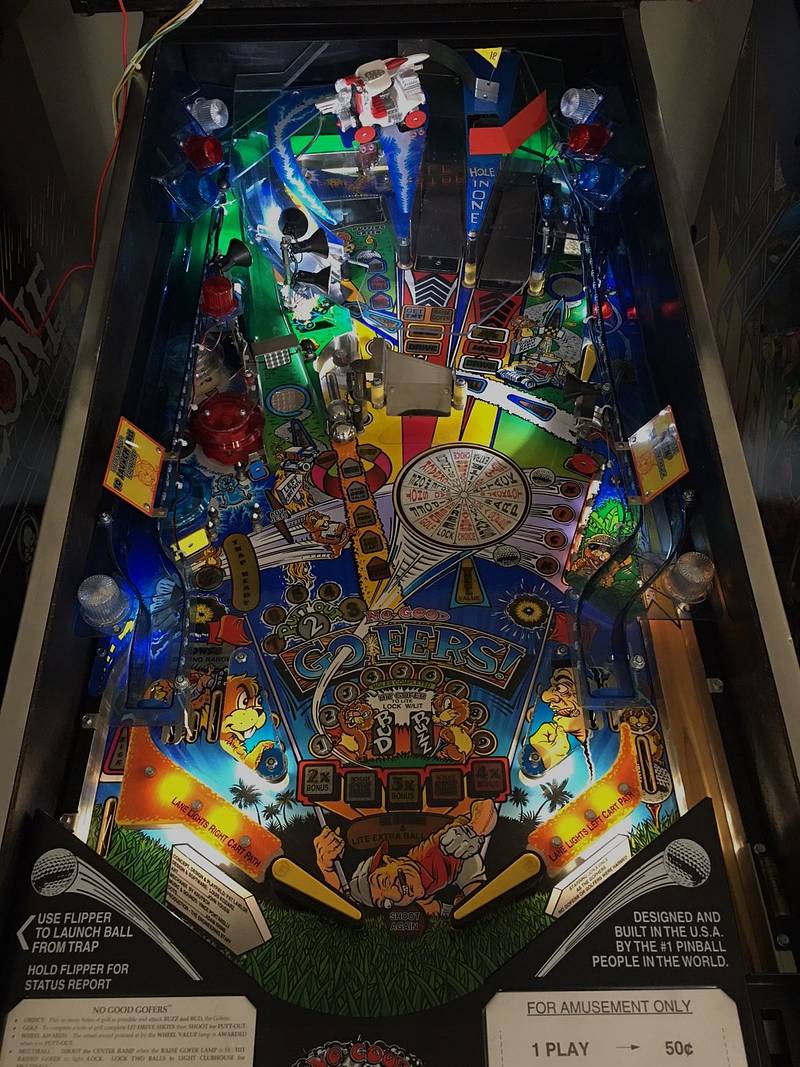 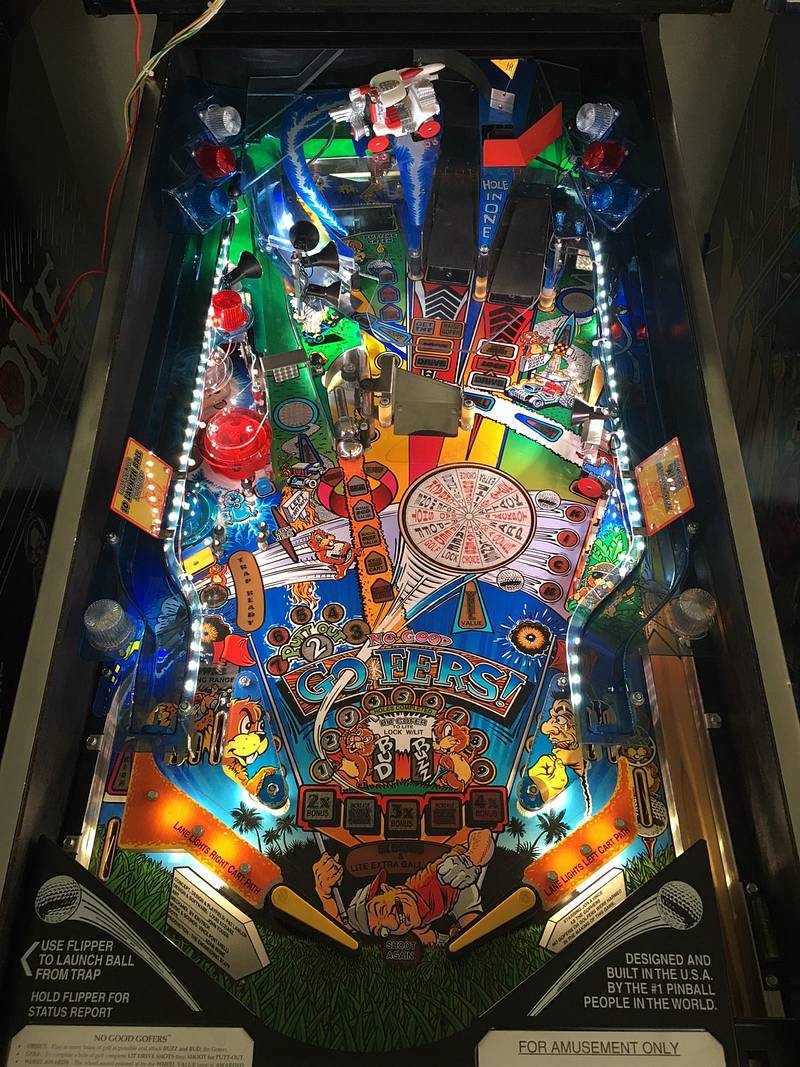 That's very nice work! This same approach could potentially work for lots of games with ramps running along most of the left/right sides. Looks like you could use a strip between the flippers though.

Thanks! The kits I normally do have LED strips in the trough (or along the apron) and one across the backpanel of the playfield. Those will get added at some point.

Installed a Pinduino and a set of addressable LEDs in my Walking Dead over the weekend. One string of LEDs is installed on the left ramp and another string is installed on the right side of the apron. Each string is controlled separately by a single Pinduino.
Most of the lighting effects happen on the apron while the ramp LEDs light the playfield. The coolest effect happens at 6 min 20 sec in the video during the crossbow shot where Eric helped write a "bullet" sequence into the effects. Really neat!!
Here are some examples of the effects in the current sketch:
Apron flashes blue when the prison is hit.
Apron flashes green when the well walker is hit.
All LEDs flash red when the pops are hit.
Apron flashes green when the Woodbury spinner is lit.
» YouTube video

Tres! For anyone interested, here is a link to the code: https://github.com/elyons/professor_pinball_pinduino_sketches/tree/master/Walking_Dead

Where is everyone finding pre-finished corner trim. HD only has raw aluminum angle.

I just use the aluminum angle and spray paint it black. Takes 5 minutes.

Thinking of getting RGBW strip - Powering white off of 12V all the time and then hooking the RGB up to different strobe bulbs. Would that work?
How are people using the RGB(W) controllers? Or doing "GI effects"?

I use some RGBWW strips for home cabinet lighting and found that when the white channel is on, it heavily mutes the colors. It might work well enough in a pinball machine, but I'm not sure it will have as much as an effect as you may hope.

Just made a quick set. Total cost was $9 for light and ps, have enough lights for 1 more machine too. $16 for aluminum rail. $2 Velcro. $28 total. If I can find a diffused costing strip I think I will go with that next. I also want to get dimmer because it's too bright but even on a wide body, I get nice even warm white light across. The game is not on either.

The only problem with the service outlet is that the power is on all the time, even when your machine is switched off. So unless something else turns the lights off, they will always be on when you have the machine plugged in the wall.

One way to get controlled 110V AC (turns on/off with the game power) is tapping into the dollar bill acceptor wire harness. All Whitestar/SAM games have them and I believe most WPC. Not sure about earlier games.