I've been working on a new version of the Pinduino that is leaner, meaner,cheaper, and easier to connect to various board sets. The first set of boards have arrived and I want to share how they look and work.

For those that haven't heard about the Pinduino, check out this thread: https://pinside.com/pinball/forum/topic/update-arduino-shield-propin-pinhead

The pinduino V0.2 had a lot of flexibility, controlling 3 addressable LED strips and 4 separate RGB LED strips (as well as other mods). After making about 10 designs for various Stern SAM, Whitestar, and Williams/Bally WPC games, I realized that for the most part, I was using only 1 or 2 addressable LED strips, and none of the other features of the board. In addition, the wiring harnesses were a pain in the ass to make. So I wanted something more streamlined for just controlling up to two addressable LED strips, and was easier to make and install. Also, in the time since Copperpot (Wes) and I designed the first pinduino, there has been advances in Arduinos. Namely, the Nano, which now has a version with more than enough RAM to store all the Pinduino libraries and code (4x more RAM than when we started the Pinduino project).

Here are the first set of fully functional boards. 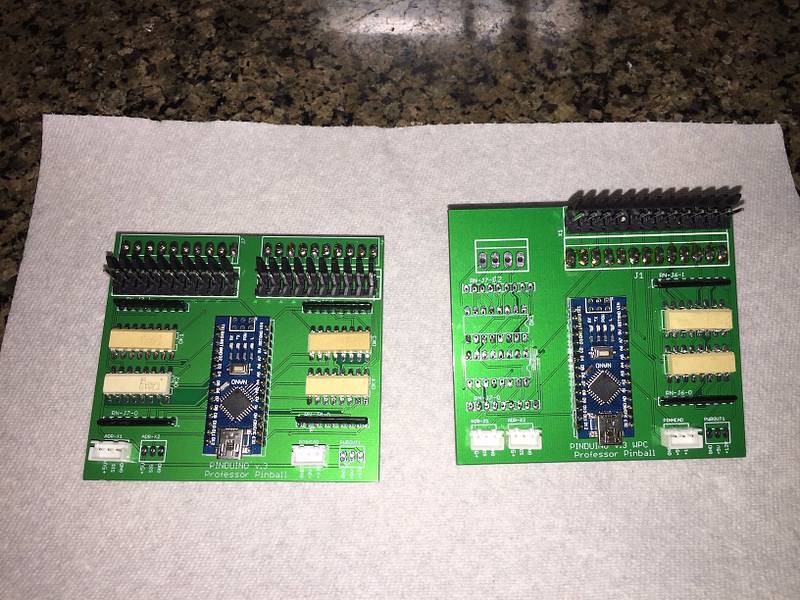 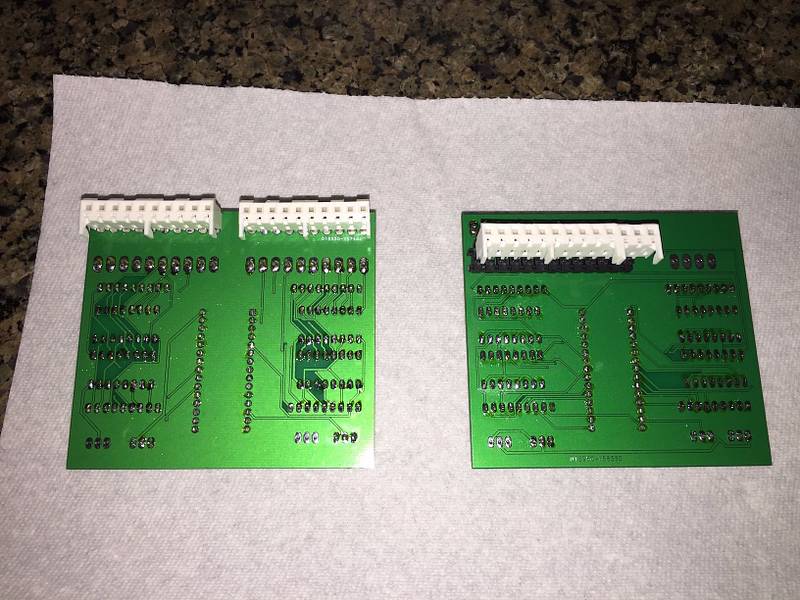 Note: The the board on the left is for SAM and the one on the right for WPC systems.

Installed in an XMLE (Stern SAM) 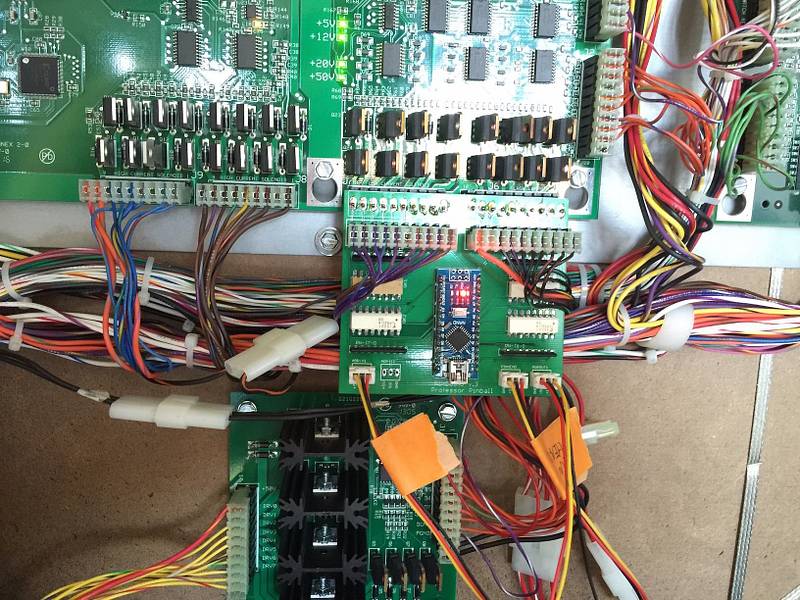 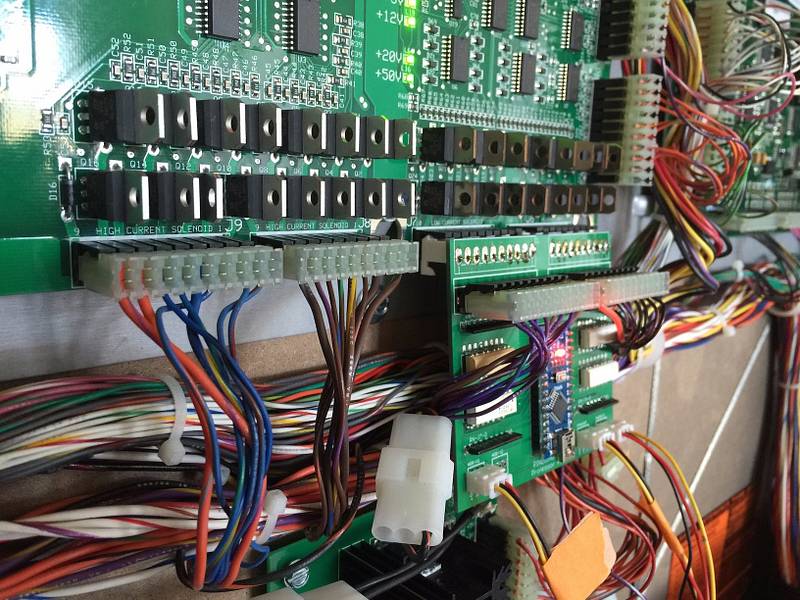 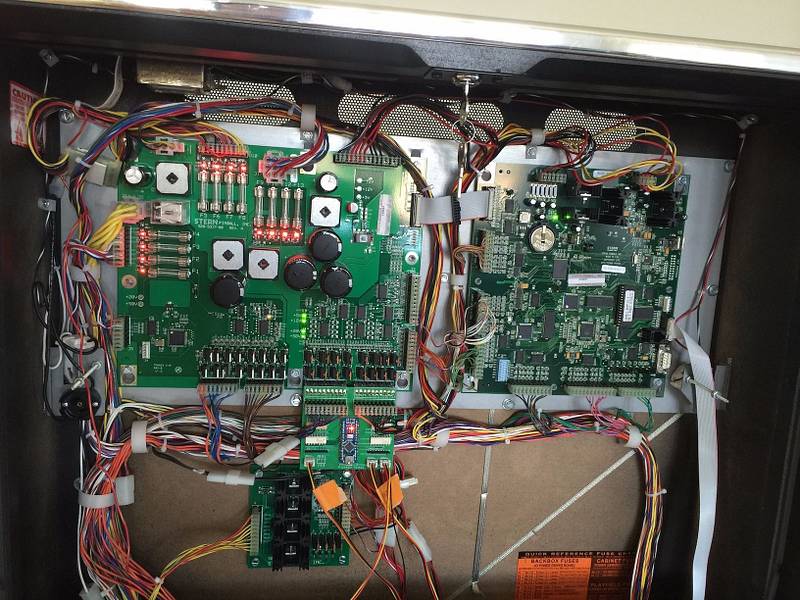 Installed in a Spiderman (Stern SAM) 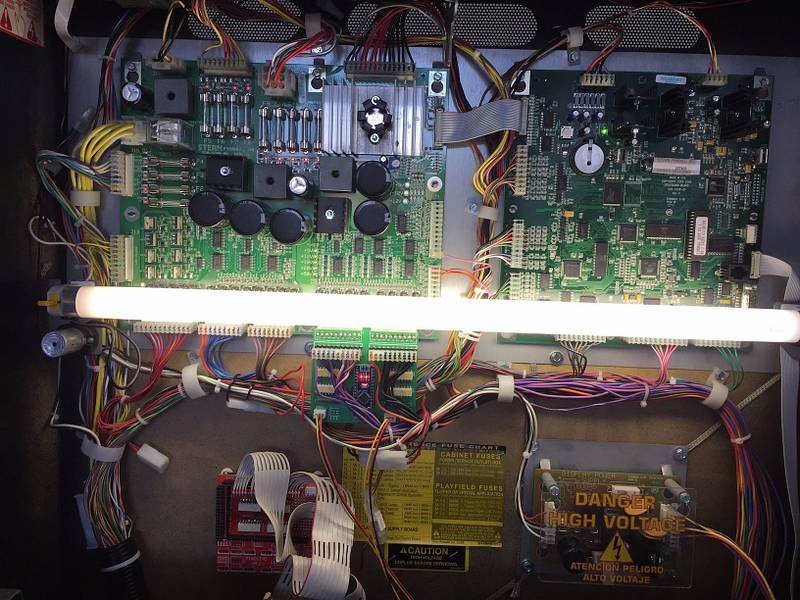 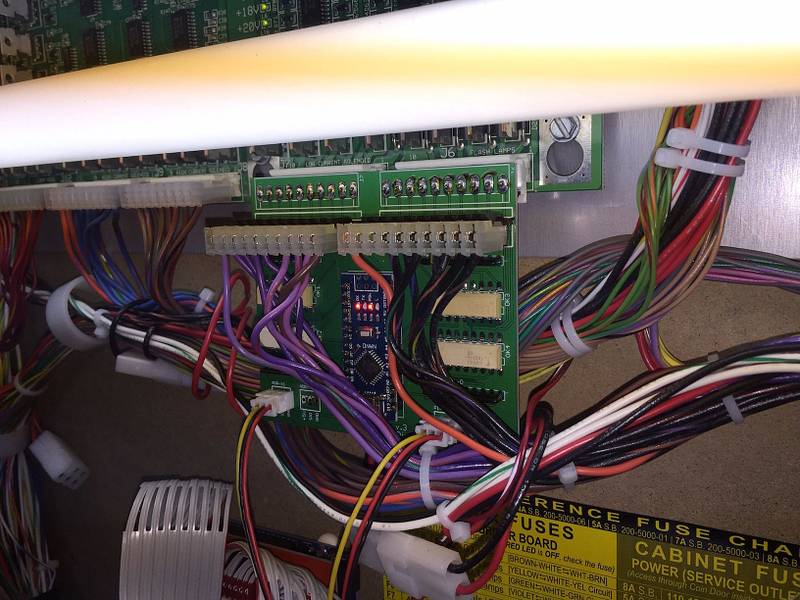 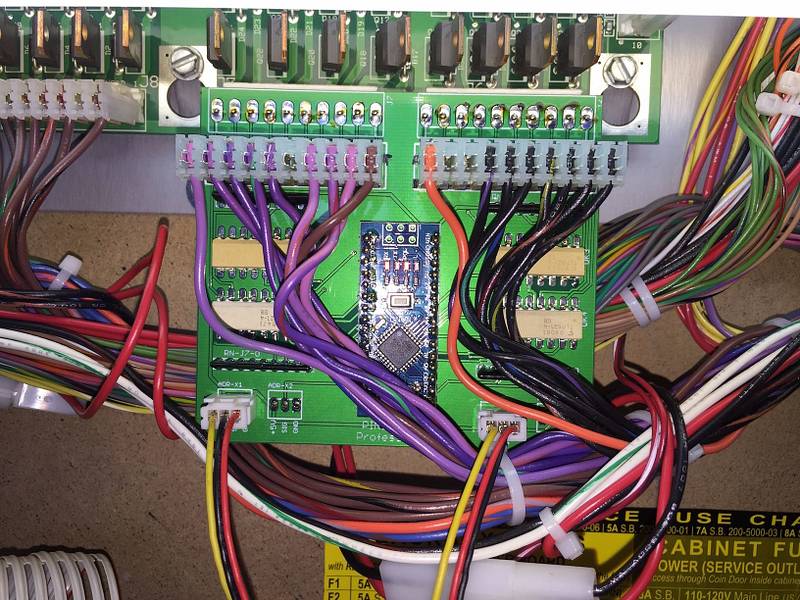 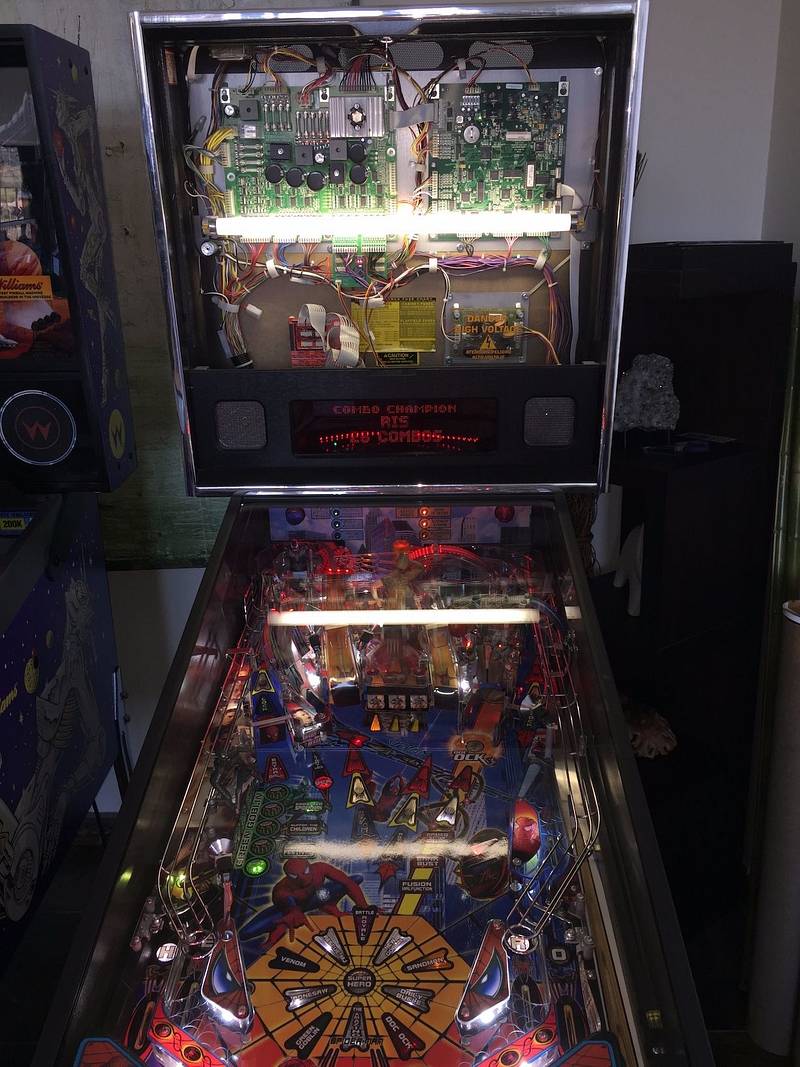 Installed in a Bride of Pinbot (Williams WPC) 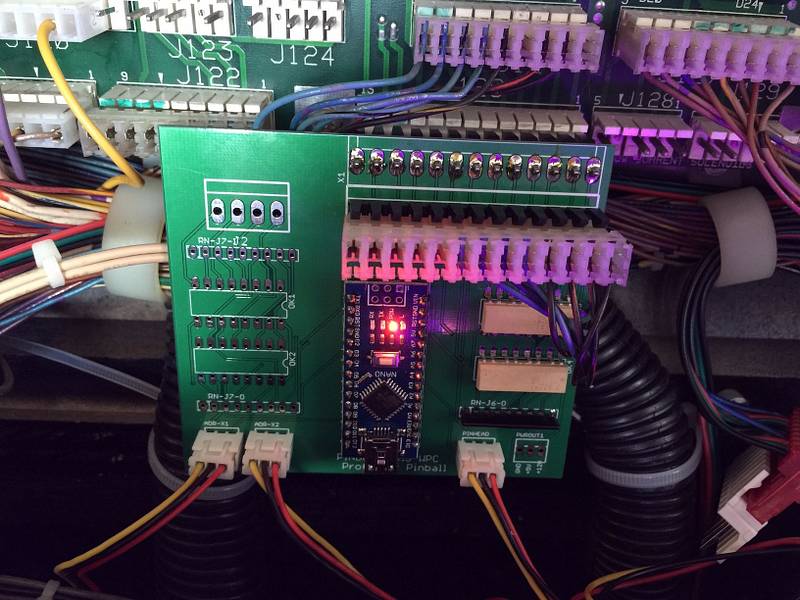 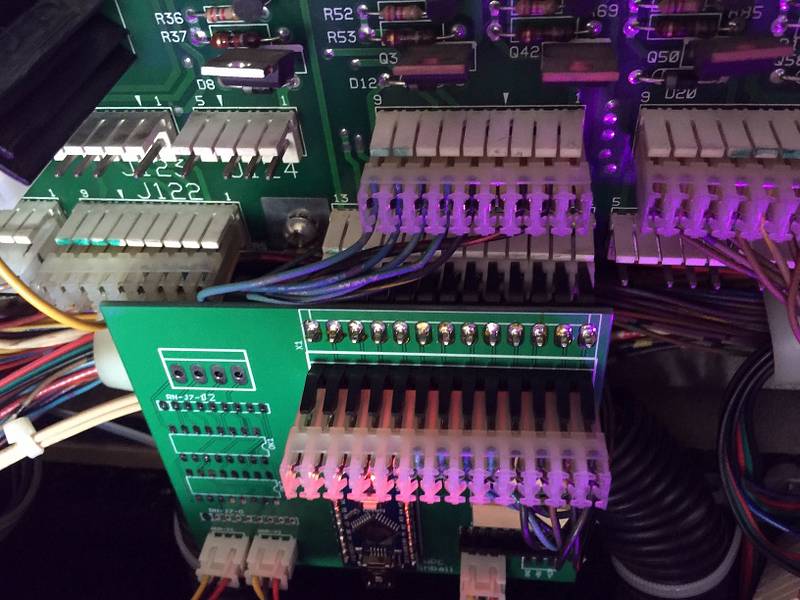 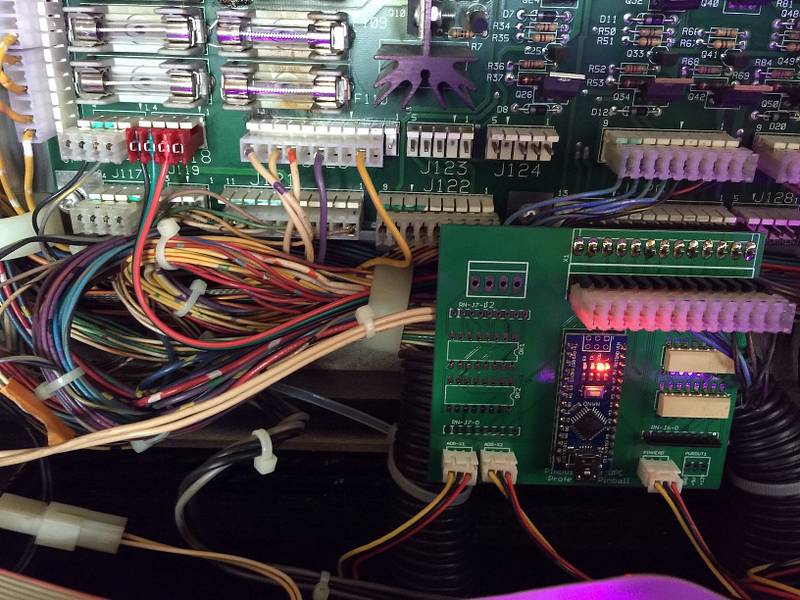 These are the first versions of the V0.3 boards and there are some problems with them.

For the Stern SAM, even though the pinouts to connect to Whitestar systems is the same, the placement of the powerdriver boards on Whitestar systems do now allow for enough clearance to install this board (it is too close to the bottom of the head). For this, I have another design that is about 30% shorter and places the header connectors to J6 and J7 in the middle of the board. Those have been sent out for manufacturing and should be in hand in a month or so.

For the WPC system, I need more height clearance to let the wiring harnesses in the head pass underneath unobstructed. For this, I frankensteined a header to the board mounted plug. I don't like this, but it works. I have designed a small header board to fill this gap and that too has been sent out for manufacturing. 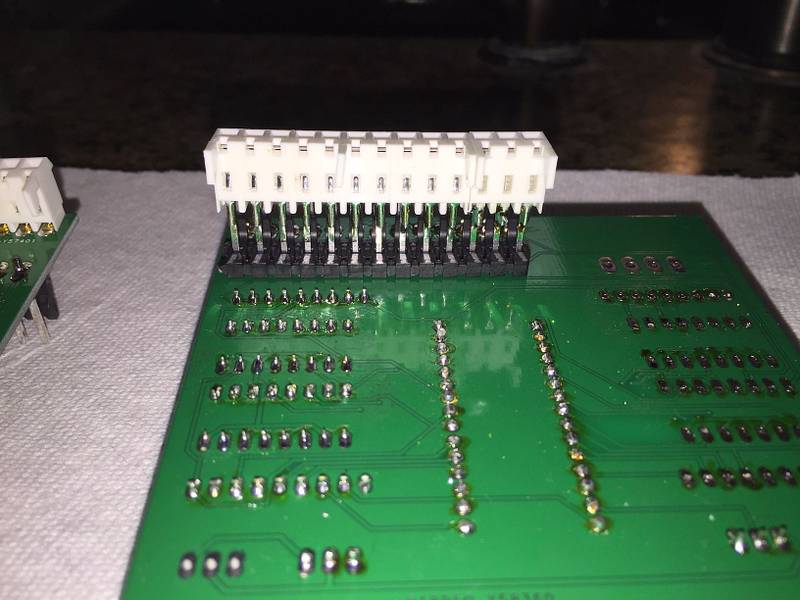 If anyone has any ideas for a better design, please post. (Wolfmarsh, I'm looking to you).

Also, I want to thank Wolfmarsh the ideas he posted when using one of the Pinduinos. The pictures he posted were got me thinking about this redesign that would allow the Pinduino to be directly plugged into the headers of the powerdriver board. I also want to thank Copperpot for all the help in designing the original Pinduino boards and his thoughts on this version.

The other thing about this design is that they are stackable. For the designs that I have that were using 3 or four channels of addressable LEDs, I ended up using two pinduinos due to lighting effects having different timings (Arduinos do not do multithreading). If more than one board is needed, they can just be stacked. This should make it much easier for folks that want to do over the top lighting control for the pins:

Reserved (for stuff I forgot)

I forgot to post a link to the code repo (also contains links to build and installation instructions for various games): https://github.com/elyons/professor_pinball_pinduino_sketches

I signed up for pinside to say I'm very interested in this project. I have an TAF machine I've been wanting to do some custom lighting for forever-- very excited to see someone is way ahead of me on this.

Glad you like the Pinduino. This version is moving along. Right now have boards left for about 5 WPC and 5 SAM. I'm going to be using most of the WPC boards for a kit for the Bride of Pinbot (shuttle ramp and head LEDs). I have some SAM boards that I'd build and send to a person or two who wants to do some testing and provide some feedback.

Also, there is a previous version (with a lot more flexibility) that you can get from Rock914 (just send him a PM).

Have an update. New format for the WPC boards along with adaptor headers to get clearance. Works very well! 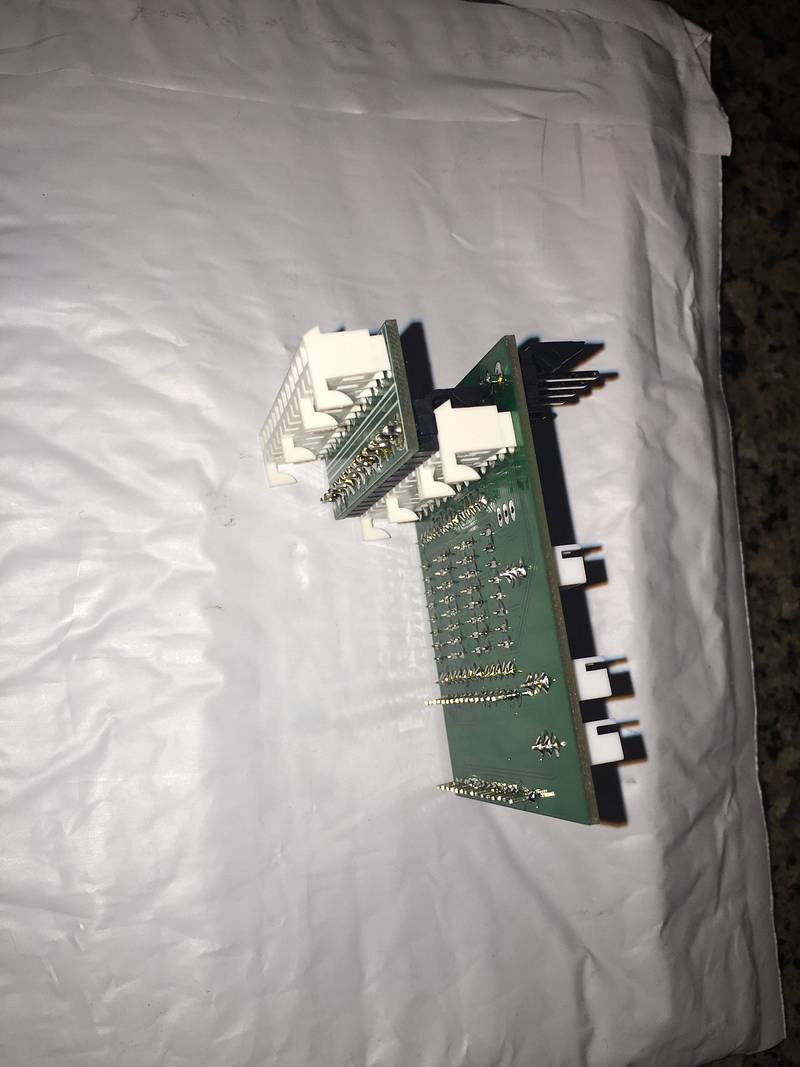 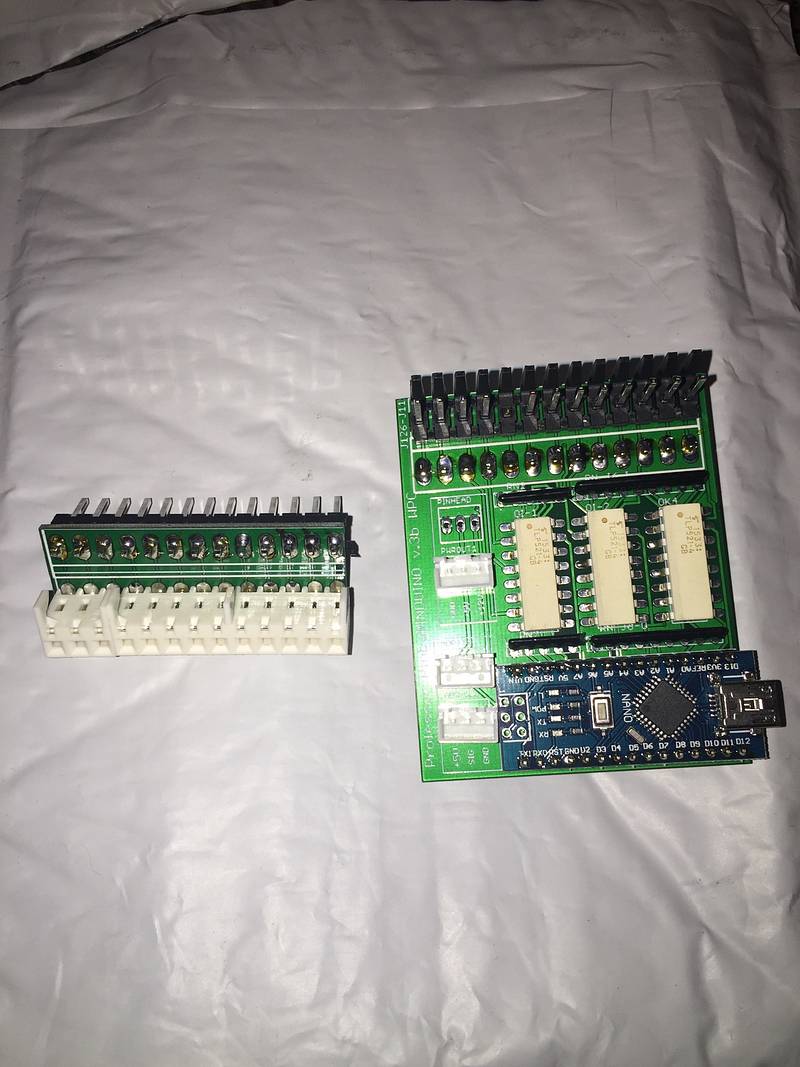 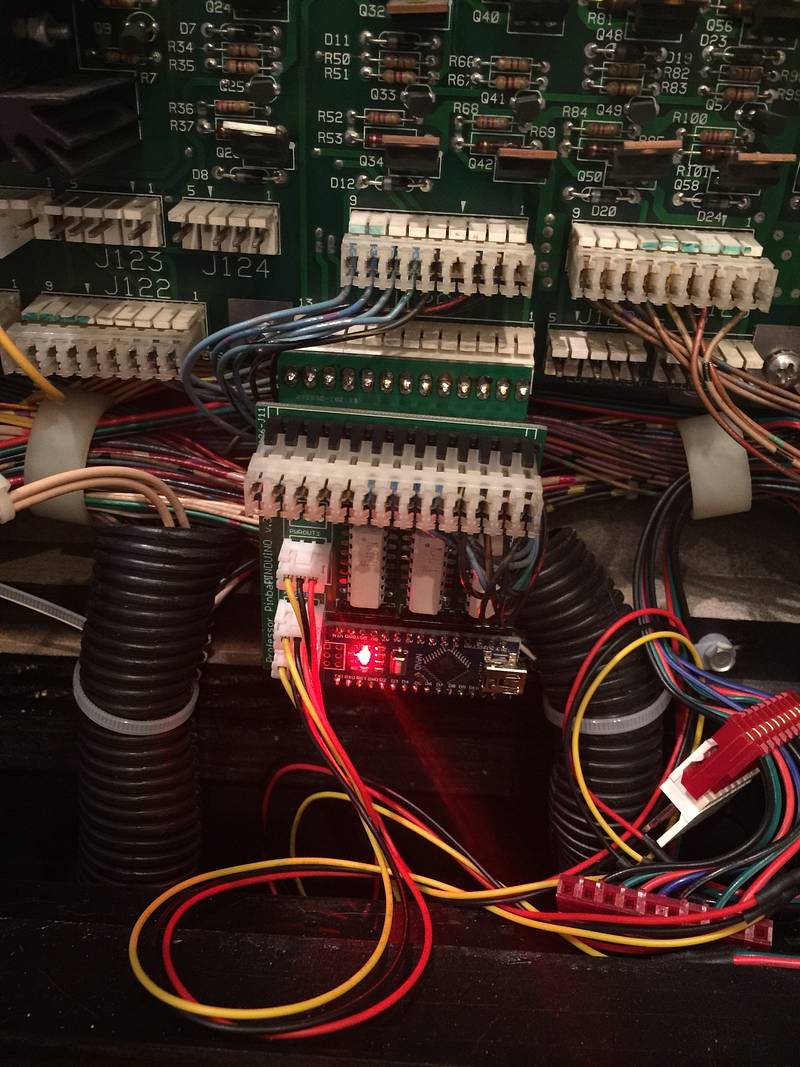 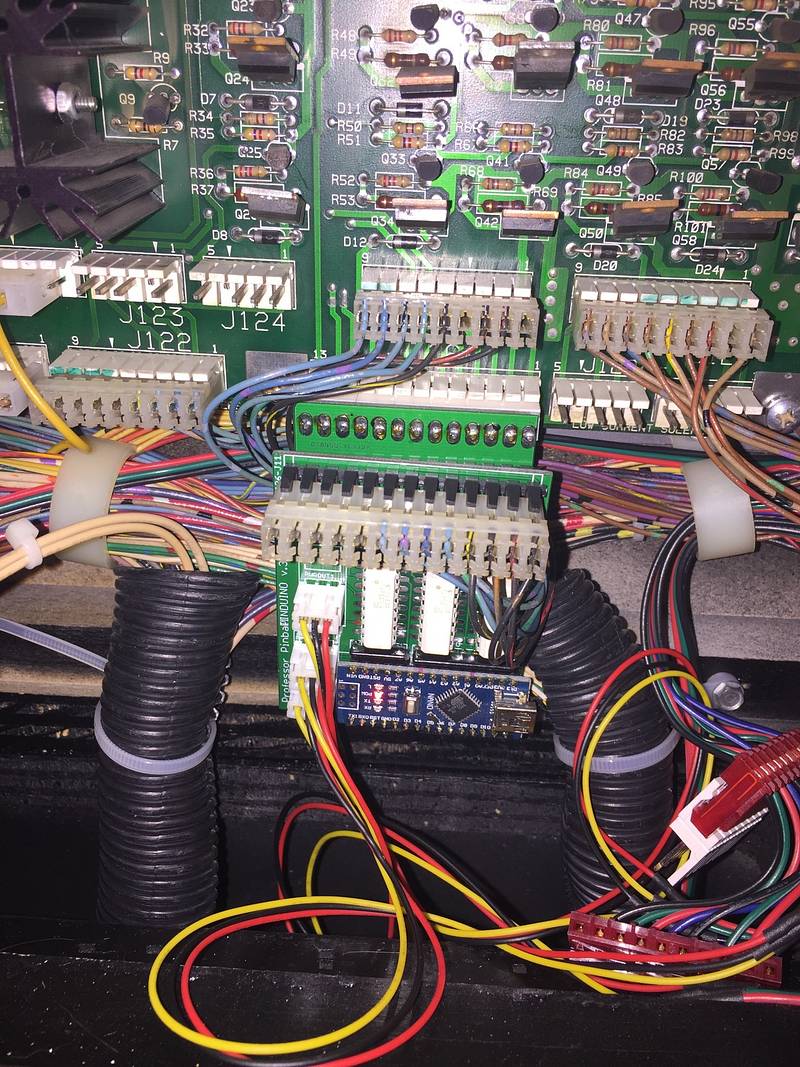 My Bride is ready when these are

I realized that I hadn't posted a link to code and instructions in this thread: https://github.com/elyons/professor_pinball_pinduino_sketches

My Bride is ready when these are

I plan to build the first set of these this weekend!

Johnny and Shadow are excited!

The first two "tester" kits for BoP are ready! 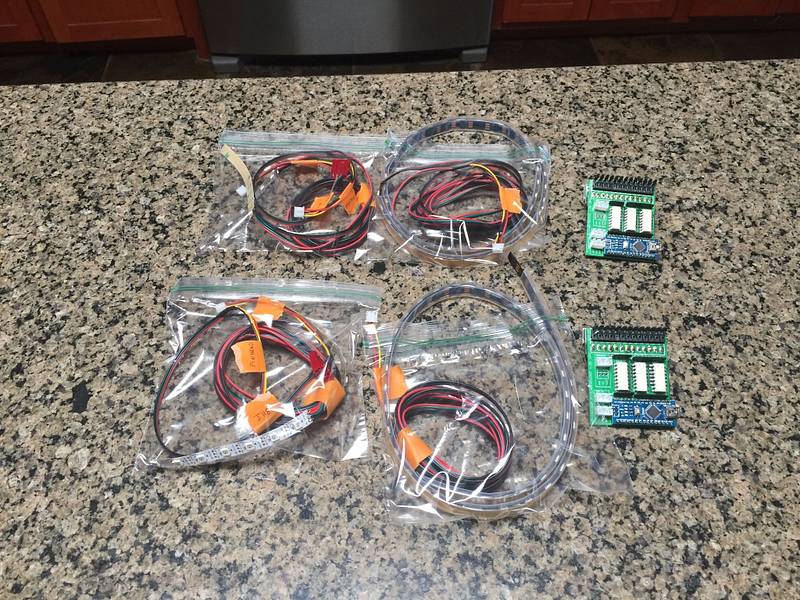 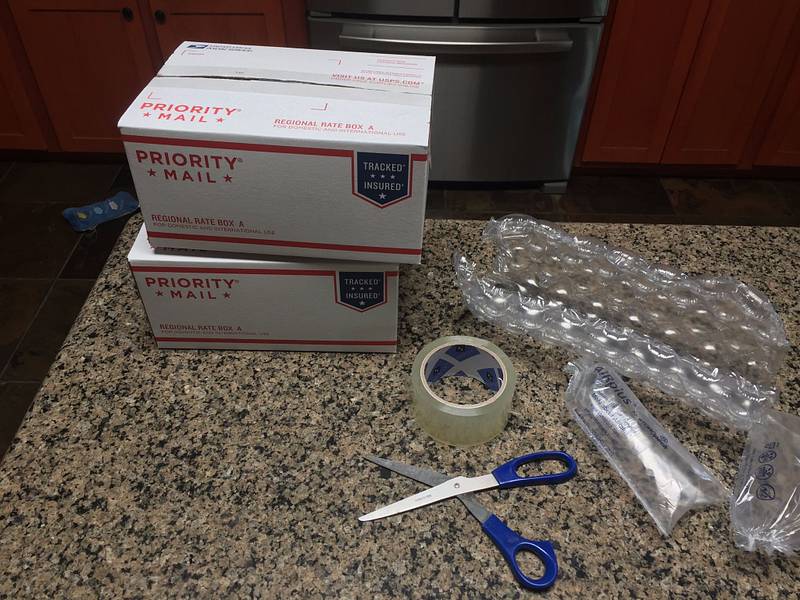 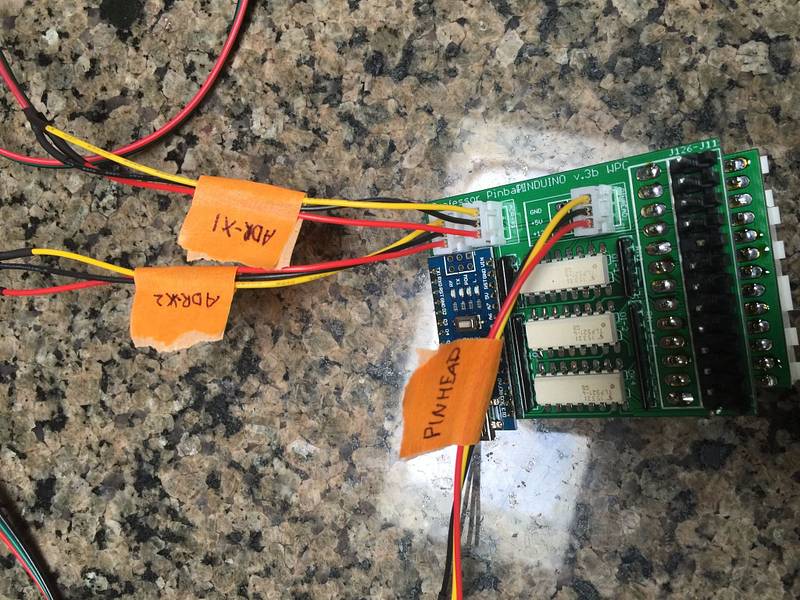 Looking forward to this for my BoP. Thanks again!

Just ordered one of these for my TOM - so pumped! Any gameplay video on a Theatre of Magic? I see some videos during attract mode, but wondering what the ramps do currently during gameplay.

Just ordered one of these for my TOM - so pumped! Any gameplay video on a Theatre of Magic? I see some videos during attract mode, but wondering what the ramps do currently during gameplay.

Thanks J! I'll get this to you as soon as I can. Here is a video of gameplay:

Thanks you. Code, as always, is open source for anyone to use: https://github.com/elyons/professor_pinball_pinduino_sketches/tree/master/Theatre_of_Magic_interactive_ramps

Where does someone go about ordering one of these? I'd love to enhance the lighting effects for my Demo Man! (Especially now that my GI connectors have been replaced with non-cooked ones)

Where does someone go about ordering one of these? I'd love to enhance the lighting effects for my Demo Man! (Especially now that my GI connectors have been replaced with non-cooked ones)

Just send me a PM if you are interested in this version (v0.3).

Put this in my TOM and it looks amazing! Thanks Eric!

Put this in my TOM and it looks amazing! Thanks Eric!

Right on! Glad to hear that you like it. I love the updated code for ToM.

Right on! Glad to hear that you like it. I love the updated code for ToM.

I love the code on it now - is there newer code than what you shipped on it or are you referring to what was already on there? I haven't updated since I got it...but I can

I love the code on it now - is there newer code than what you shipped on it or are you referring to what was already on there? I haven't updated since I got it...but I can

You have the latest code. It was building your kit with the new pinduino that gave me the chance to go through it again and update it with many more effects.

Just installed the leaner 0.3b version in my Bride of Pinbot this weekend. Love it!

Just installed the leaner 0.3b version in my Bride of Pinbot this weekend. Love it!
https://pinside.com/pinball/forum/topic/pinduino-bride-of-pinbot-1#post-3208760

Great writeup and review! Thanks for taking the time to do that.

For anyone interested in ordering a Pinduino, I set up a shop to order them on Etsy: https://www.etsy.com/shop/ProfessorPinball

Makes payment and tracking orders a lot easier. For anyone interested in a plug and play kit for a game (e.g., BoP, ToM), just let me know and I'll get those added to the shop. Thanks to everyone for all the orders so far!

(Note: I am currently out of stock on Stern SAM boards -- they are on order and should be ready in 4-6 weeks).

This is my Tron Legacy Pro with the pinduino controlling the GI.

This is my Tron Legacy Pro with the pinduino controlling the GI.
» YouTube video

If you put this kit in Corvette, please make a litle video !

I have your Esty order and will get this built and sent out to you. Thanks! (I need to get the bare Pinduno's listed on my Pinside store as well.)

Spent the day making a lot of pinduinos. They will soon be on their way making pins (and their owners) light up with happiness. 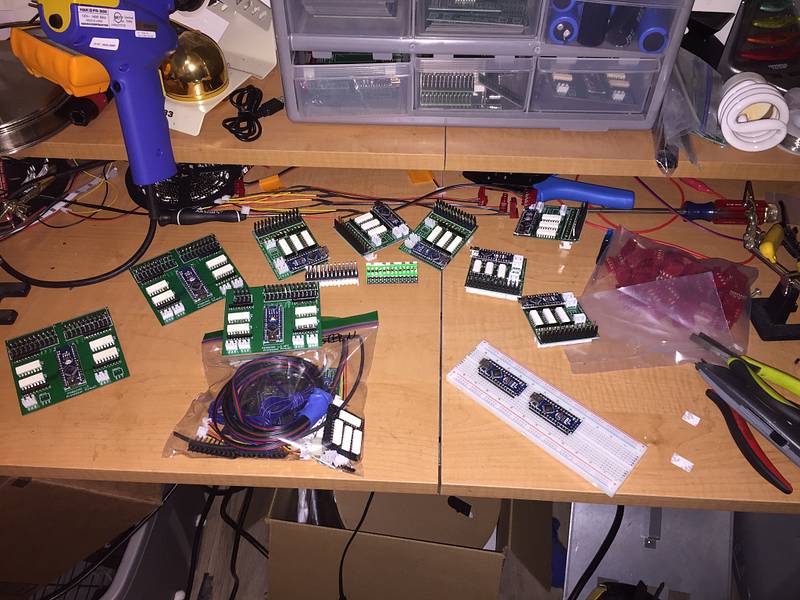 If anyone wants a BoP or ToM Kit, I have them built and ready to ship. Please visit my Pinside store: https://pinside.com/pinball/biz/directory/1227-professor-pinball

If there is a kit you would like that is not in the store, just PM me and I'll get it posted.

And I'm always happy to help people make their own: https://drive.google.com/drive/u/0/folders/0B2njOnd06CCOdlBCVzdiWFZhUVE

For those that are interested, I have moved the main pinduino library to be in its own GitHub repo: https://github.com/elyons/pinduino

This is so that I can submit the library to Arduino and have it be easier to install for people through the Arduino library manager. Now, you just download the Arduino IDE, select Sketch->Include Library->Manage Libraries->"pinduino" and off you go. 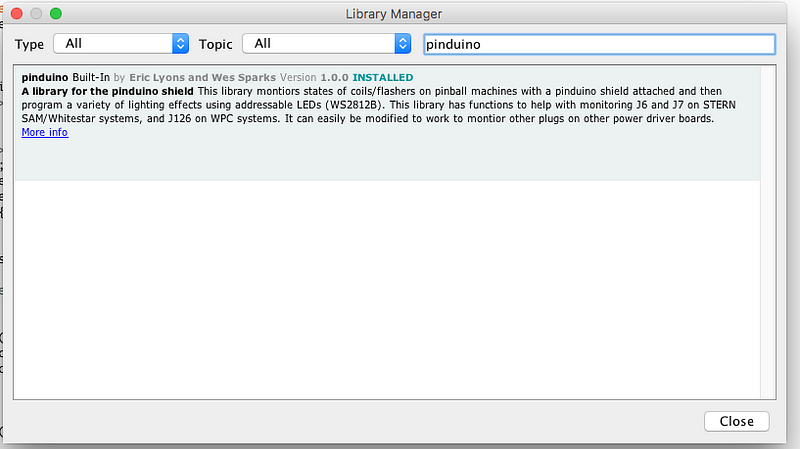 First version of code for the ramp in Twilight Zone powered by the Pinduino:

Documentation for building and installing: https://docs.google.com/document/d/1Ex8cViVcfrn6gj9XRCe_3N8xbNCnuXmDaTqN-ZotmtQ/edit

Feedback and ideas are appreciated as I continue to refine this.

Could you control a motor or Servo as well? Similar to what the PIG used to do?