You're currently viewing posts by Pinsider JT-Pinball.
Click here to go back to viewing the entire thread.

Hello all, I’m working on a Pinbot that is missing part of the sounds. The game has a Rottendog MPU in it. When I go into Music test I get nothing. When I do the sound test they all work. I have 12v at sound board and mpu. I am assuming it’s probably the one of the amps on the sound board? Is there a way to know what one?

Ok thanks you. I swapped ribbon cables to see if that made a difference. It didn’t. I also pulled the PIA from the sound section of the MPU and swapped it with a known good chip. No difference.

I pulled the sound card out of the game. I have been doing a lot of reading on this and it seems like to me that the music was all derived on the background sound board. I put the card on the bench and hooked up all power to it via a connector. I put a 25k pot in line at j2 pin 1 and 2 and hooked up a speaker to j7. When I turn on the power and ground pin 37 on U5 I get one bong. When I probe the address and data pins on u5 at 8 to 31 they are all pulsing. When I probe the data lines on u2 at 26 to 33 they are pulsing. I picked up a sound board tester from

DumbAss and have hooked it up to use trigger the PIA. When I probe pins 2 to 9 of the PIA they are high and seem to stay high no matter what and from my understanding they are at least supposed to start high. Pins 10 to 17 are dead unless I trigger the switch on the sound card then the signal on the corresponding line goes low. Pins 18 and 19 are also high unless I push the start or reset on the card and it triggers then low. When I push d7 and hit reset start I get one bong. When I trigger other switches on the card I hear the speaker make noise for like 10 seconds. But it’s just static. When I look at the 1408 I have 5v at pins 5 to 13 I have -12 on 3. I only have like -1.6 on pin 4. It seems like to me that at certain time it’s trying to play something. It ends on its own and when I reset the test it does it again. Seems like the next logical thing to replace is the Dac, or should I look at the sound rom?

Maybe someone who is way more versed can help me on this. The schematic from pinbot on Ipdb have the drawing for 11297. My print off is total shit but I don’t think this is the board in that schematic... 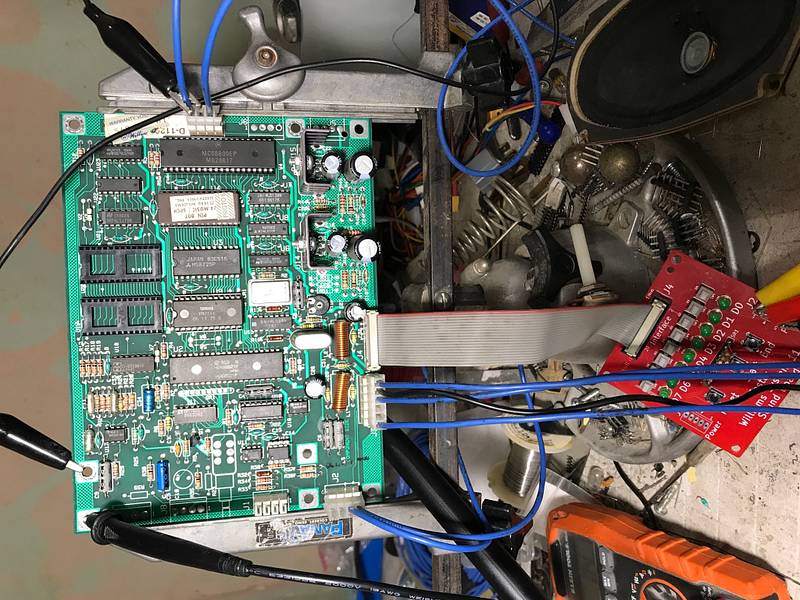 It’s the right one. It’s just super hard to read on a iPhone. I guess first I need. Better copy of this drawing.

I have a pinbot sound board (prototype) It was in my f14 and the sound wasn't properly working. Grumpy said it would only work in a pinbot. I replaced it with a sound board from fre and it works flawlessly now.
Pm me if you want to try this other board

Thank you! I’ll keep that in mind.

Pretty sure that's all they give you, yes.
Music is generated by the YM2151 and the YM3012 is your DAC. If you have an oscilloscope, you should be able to see clock and data out of the YM2151. I've heard of failures of the YM3012 and the MC1458s, and associated discrete items like capacitors.

Thank you. This area is where I am focusing my efforts. I was thinking it was the 1408. But I’m now leaning more towards the 3012 or some of the discrete circuitry in between. I replaced the 2151 with another one I had but not totally sure it is good. But it didn’t change anything either. I replaced the op amp at u12. And ordered new 2151 and 3012 as well as the 1408. I replaced the cap at c3 and c2. C3 looked swollen. I have c4-6 and may just replace them as I know it’s past time for them. I found this other post from a few months back about Pinbot with no speech. The write up below by

kbliznick is pure gold!!! Here is a quote from him on one of the post. It goes thru every situation but mine. The last one. No music but speech and sound.

Best advice would be to remove the ribbon cable from the sound board to the cpu board. Then go into the sound test though the diagnostic menu and see if the game makes any sounds. If it makes some sound effects but no speech then it's the 3 likely components on the mpu board. If if makes no sound at all then it's the slightly harder repair on the MPU board. Double check your work by reattaching the ribbon cable and rerunning the tests. If this is a standard build pinbot the music will be all that is generated on the background sound board through the ribbon cable (and that can be tested in the music test) and all game play sound effects and speech will be generated on the MPU board.
order of likelihood for the no speech but sound effect result
1458 Op amp at U4
CVSD at U3
10 uf cap at C15
but the cvsd is the most $ and hardest to find part so swap that last.
order of likelihood for the no speech and no sound effect result
Bad 1458 Op amp at U5
Bad RAM on CPU sound section U23
Bad ROM's at U21, U22
Bad CPU at CPU sound section U24
3 wire cable missing between sound board and cpu board

So I pulled the 3012 and replaced it with another one from a parts board. I don’t know if it’s good either, but it is what I had and it was socketed. Here is what is interesting when I triggered one of the switches on the sound tester this time I could hear the faint staticky but very distinct sound of Pin Bot.

I have a working sound board fs from a millionaire that is tested working in a Pinbot. Another option if it comes to it.

I appreciate all the votes of confidence.... I have a very good track record of doing things others thought were not possible when the stakes were very high! But a good plan B is also useful sometimes. Maybe if enough people offer up a working sound card I can at least get a good deal on another one.

You're currently viewing posts by Pinsider JT-Pinball.
Click here to go back to viewing the entire thread.