Panthera powers up, won't boot. Out of ideas.

Hey guys. Got a Panthera a few weeks back and it will only power up, not boot into code. GI goes on and some inserts, but nothing happens. It was playing for the seller except for sound. A friend graciously gave me a spare System 80 MPU he had, with a Timeline ROM in it. I put that board in with the Timeline ROM, same thing - power but no boot. Took out the Timeline rom and put the Panthera rom in there just for the hell of it, same thing, power on but won't boot.

Never owned a System 80 before so I'm just feeling around in the dark here, but here's what I've tried on top of the MPU swap:

- I've replugged and reseated everything five times over now except the incredibly stubborn plug on the bottom of the power board that I can't get out. That one does look a little janky based on the photo, it was hard to get good eyesight and grip on it since it's deep in the backbox.

- Unplugging the connection between the power board and MPU while the game is powered up knocks out the insert lights as you'd expect, but doesn't change anything else.

- There's a credit button hack in the cabinet, but I doubt it has anything to do with my problem? Took photos of it anyway.

- One molex had a loose wire, I crammed that guy back in there and now I have 6 digits on all four displays (previously two displays were missing a digit). I've looked closely at every other molex and every other wire seems firmly connected.

Photos below. Let me know if other photos would help. Any ideas are very much appreciated, thanks! 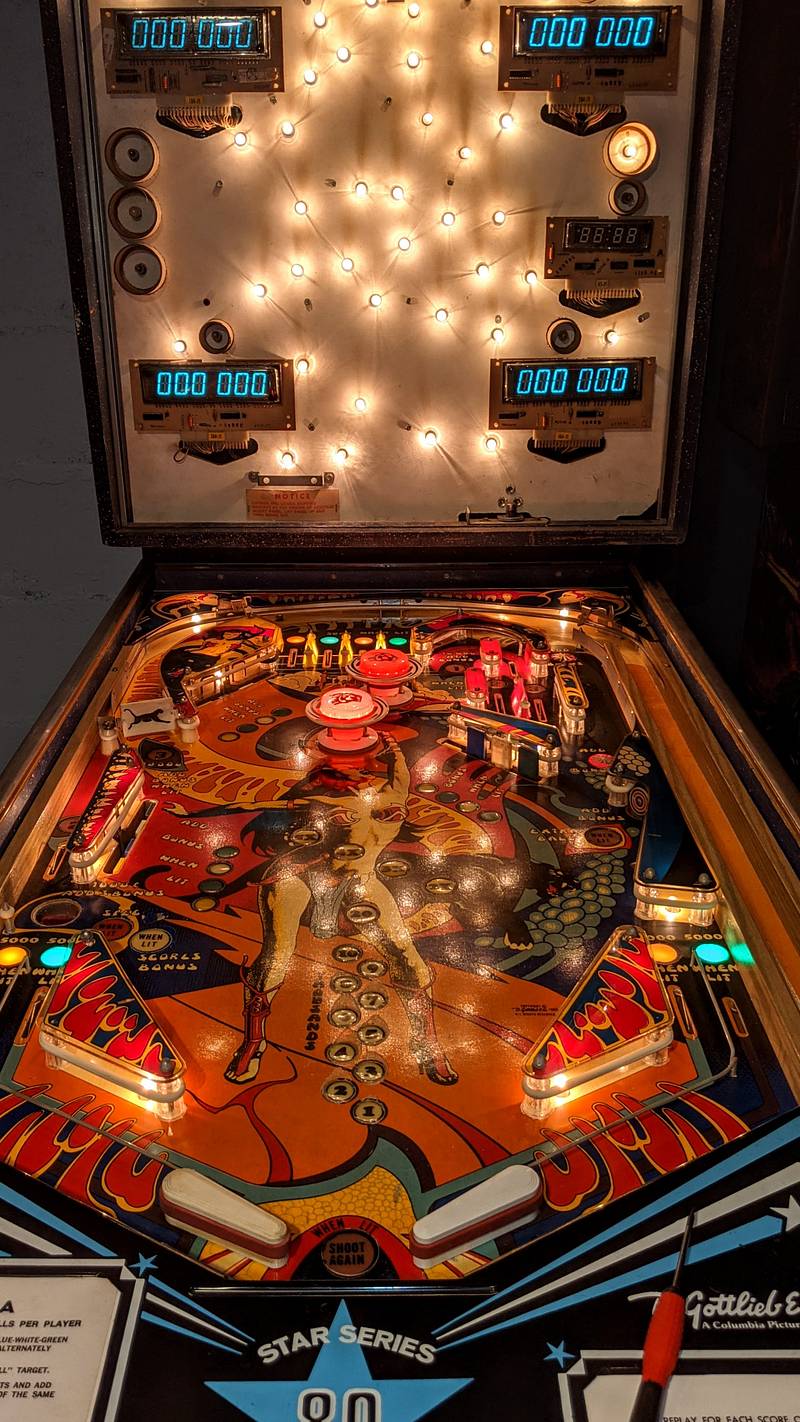 GI and some inserts, nothing else 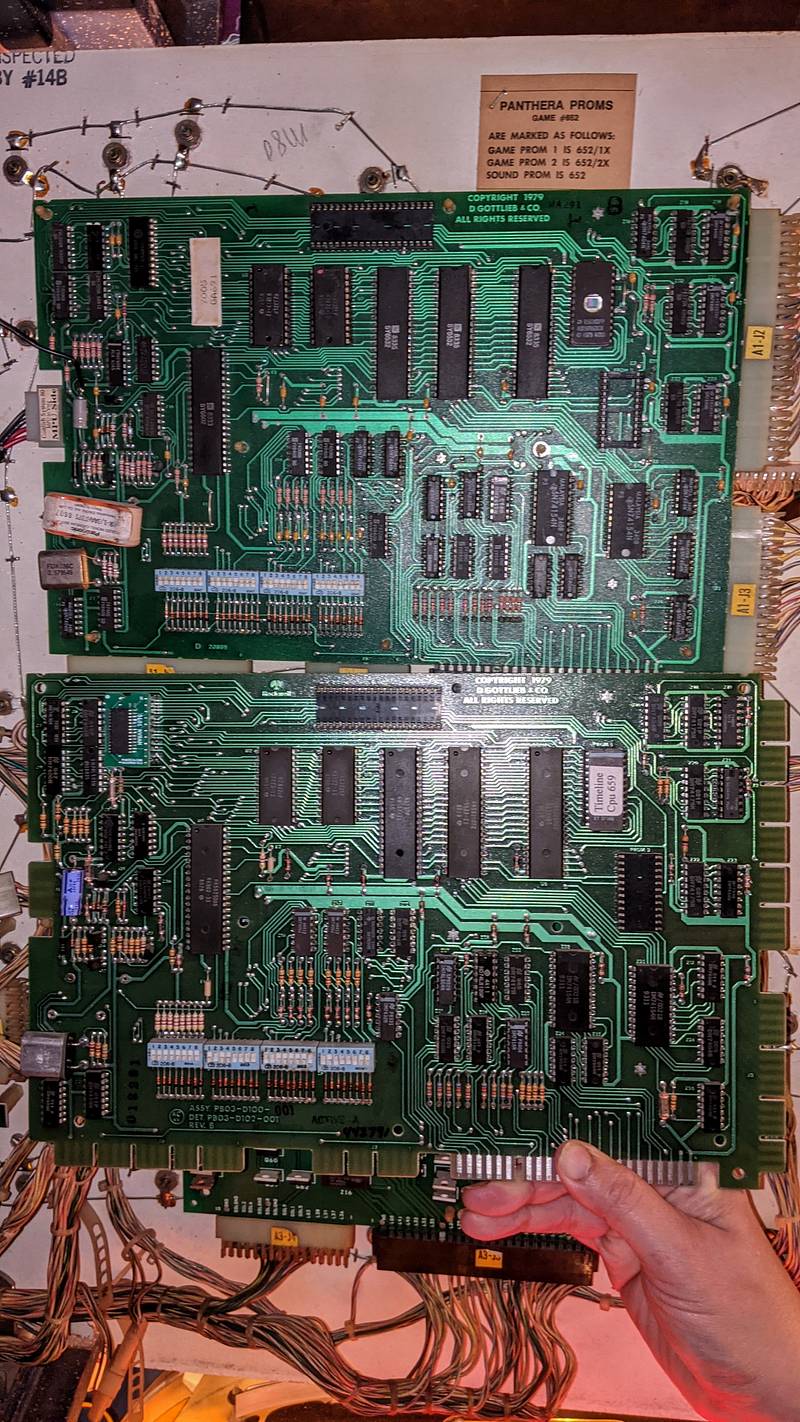 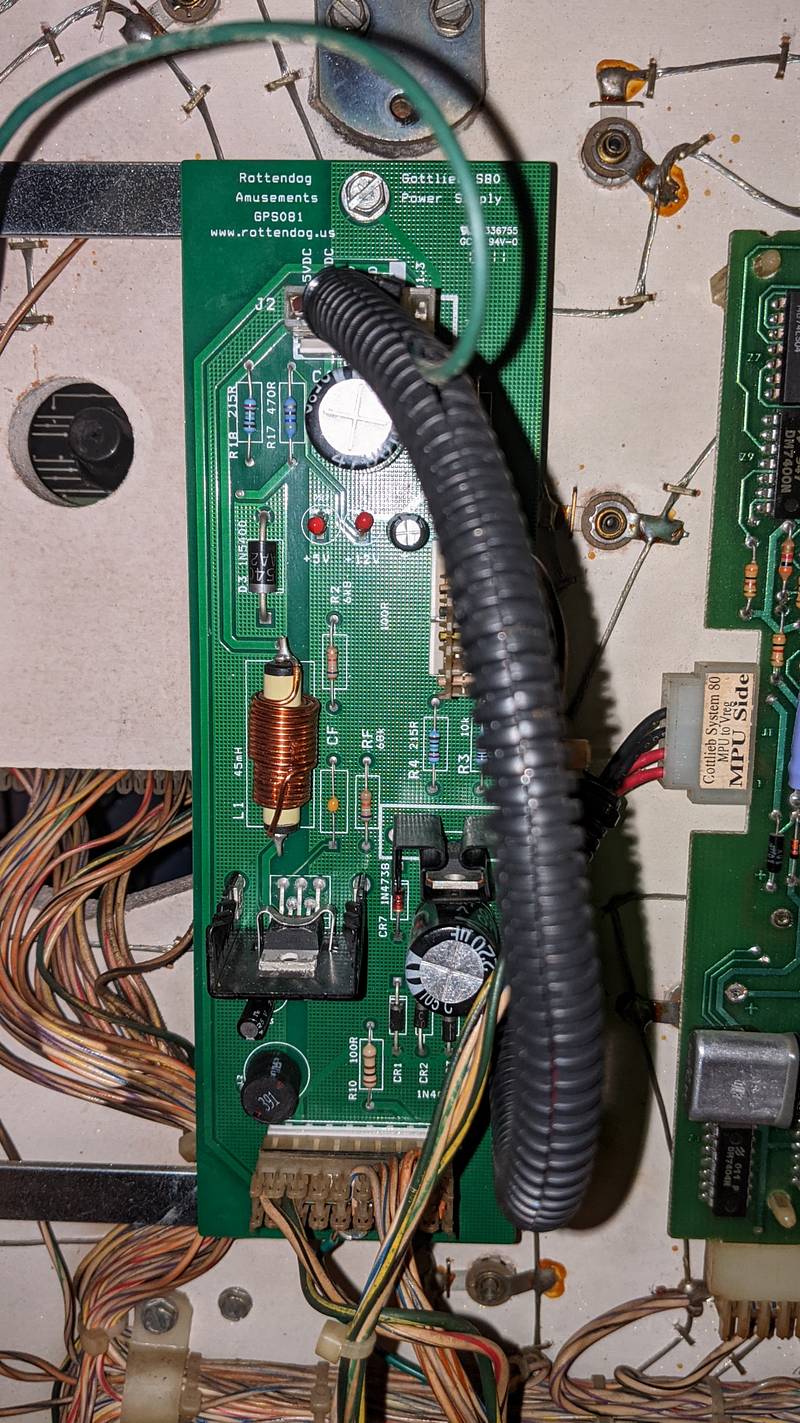 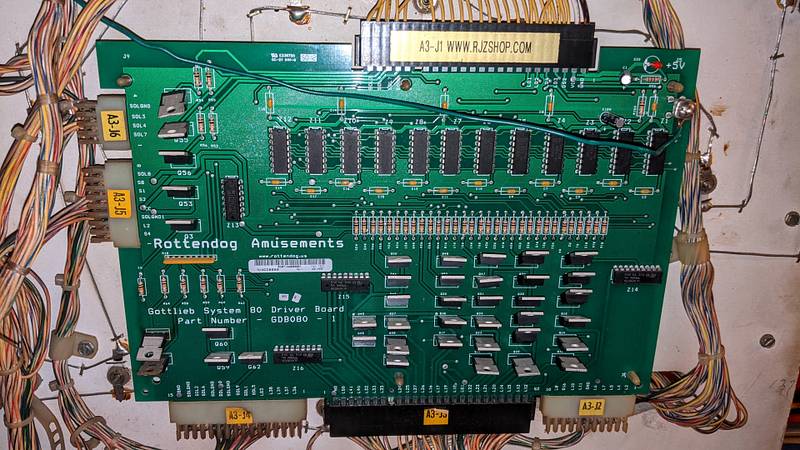 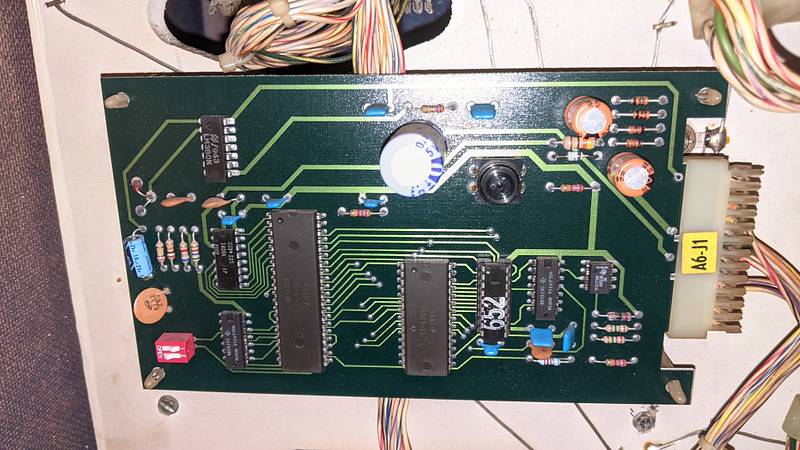 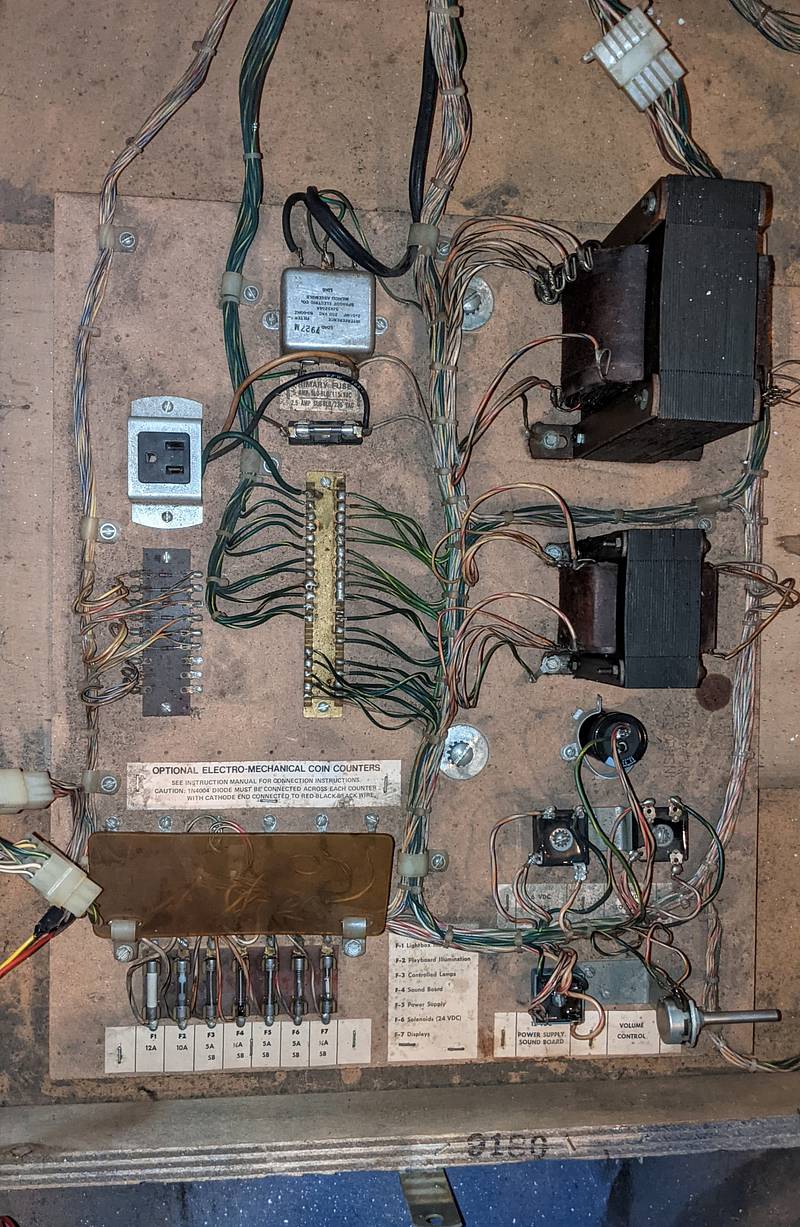 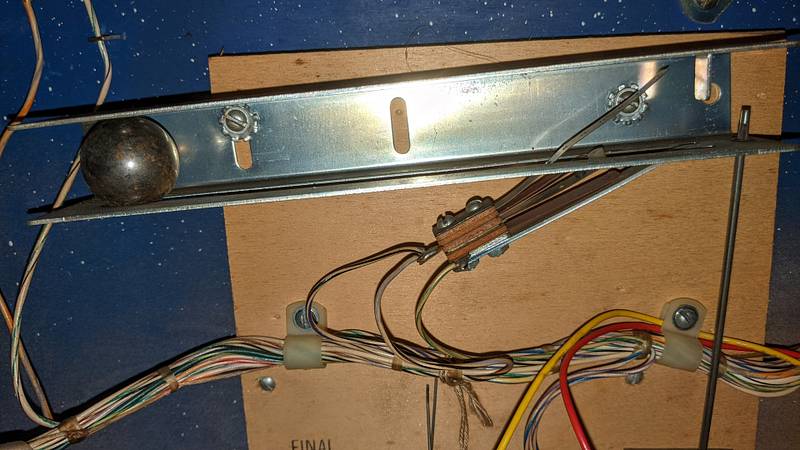 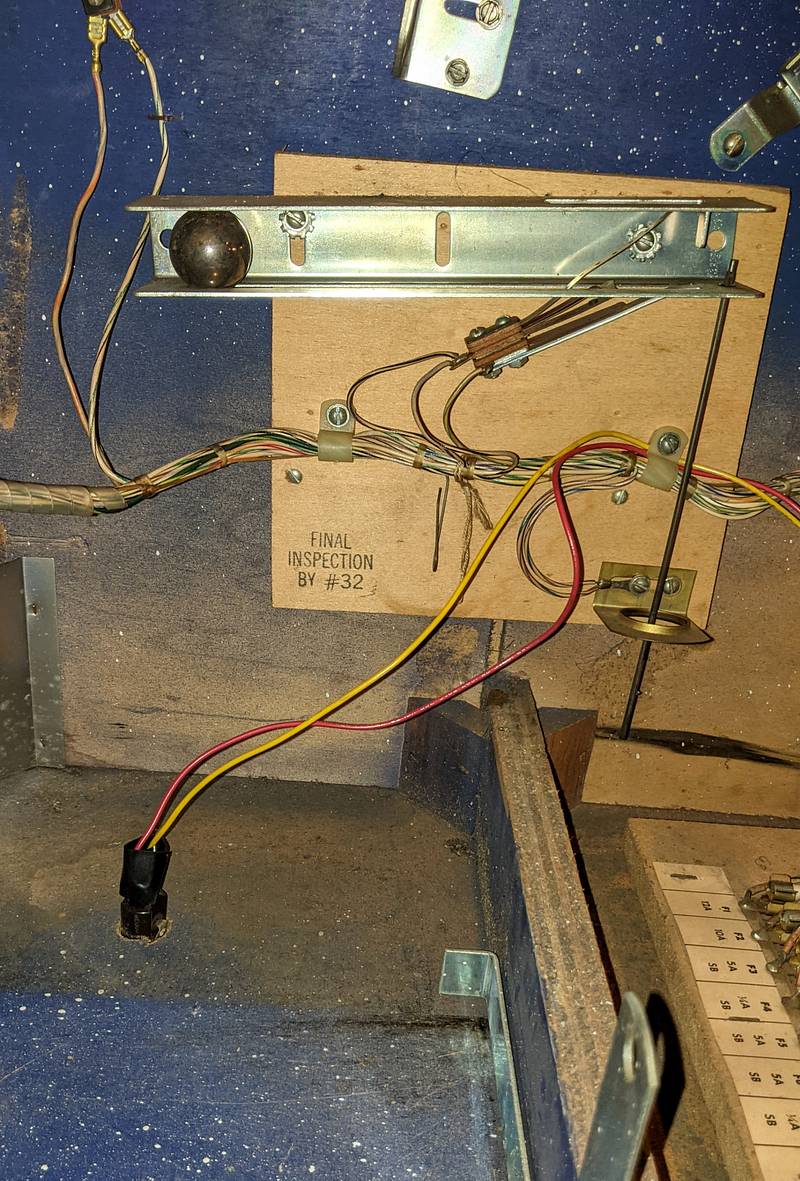 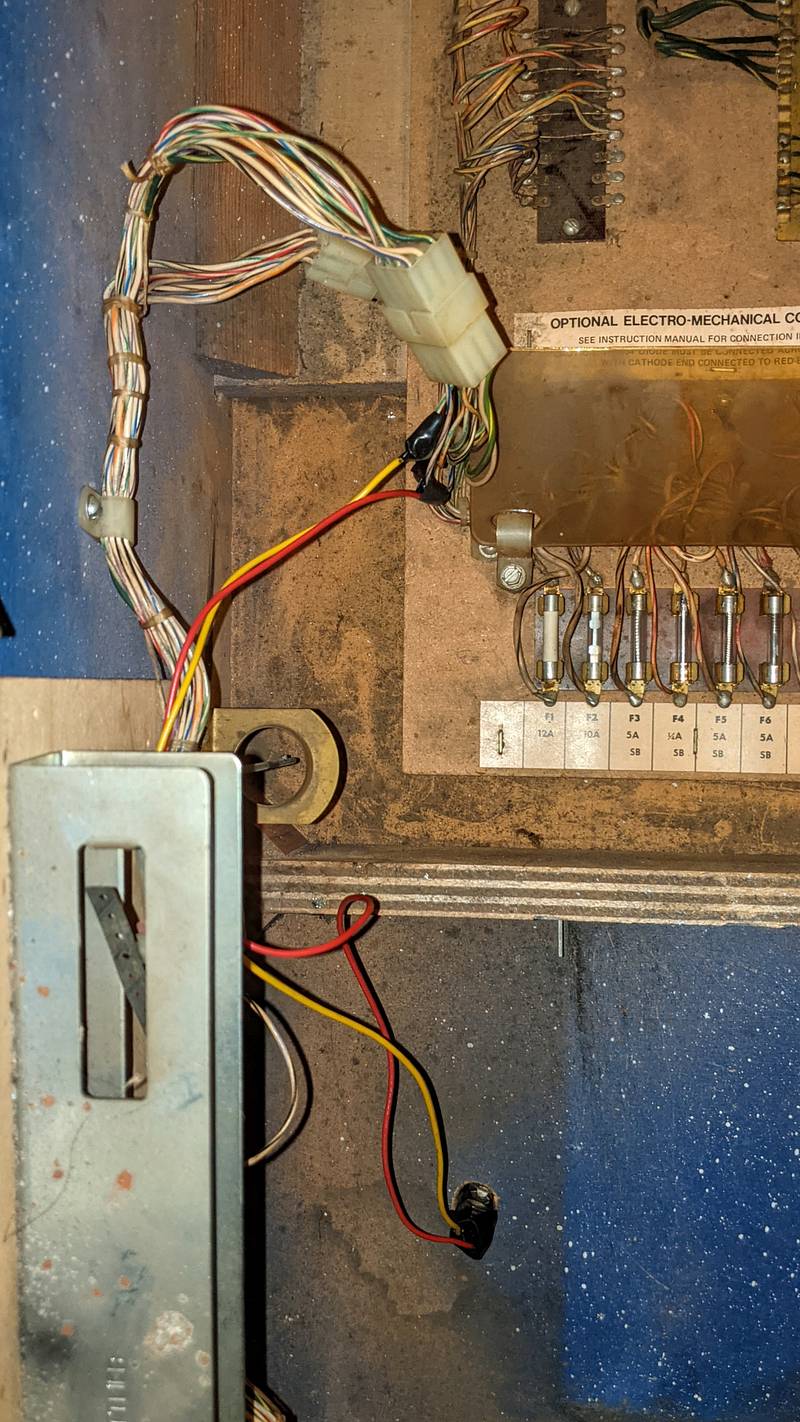 The Panasonic battery is leaking on one of those MPUs.
You show a picture with all displays at 000000.
The board is booting.
Can you enter test via the button on the inside of the coin door?

Big tip: DO NOT add or remove display connectors with power on. Doing so causes damage to the display drivers 100% of the time.
--
Chris Hibler - CARGPB #31
http://ChrisHiblerPinball.com/Contact ... for board repairs
http://www.PinWiki.com - The Place to go for Pinball Repair Info

The Panasonic battery is leaking on one of those MPUs.

Thank you, didn't catch that. I had the replacement MPU with the nvram hooked up on the last few power ups and it's still not running a code.

You show a picture with all displays at 000000.
The board is booting.
Can you enter test via the button on the inside of the coin door?

Unfortunately not. Pressing or holding that button does nothing. Is there a sequence I need to press? I'll look at the manual.

Big tip: DO NOT add or remove display connectors with power on. Doing so causes damage to the display drivers 100% of the time.

Thanks. Someone else told me that minutes after my post, too. I've always trial-and-errored first and read/asked for help later. A bad habit.

I made this first time power on checklist based on Clay's process. It allows you to verify the power before it gets to the mpu.
While you got a boot one time on the time line board I'd still want to go through this and make sure everything is correct before continuing.
https://docs.google.com/spreadsheets/d/1iAeeEA6ZIHUoUHn1RGTu9zNZAZF7fkup30nDxKP3mMk/edit?usp=drivesdk

Please make a copy of it and don't alter the original