Disconnecting back box? For older games that were designed for this...yes. I agree completely and will always do that. But...for system 9 and forward, no, the head remains intact like the way it was designed to be.

What? Sure modern games are designed to allow the head to fold down, but many times it is much better to take it off. Like when it won't fit through a doorway with the head attached. Or when you have to sack up and move a pin upstairs by your oneself.

My old house I would have to disconnect all heads to get them through this nightmare staircase: 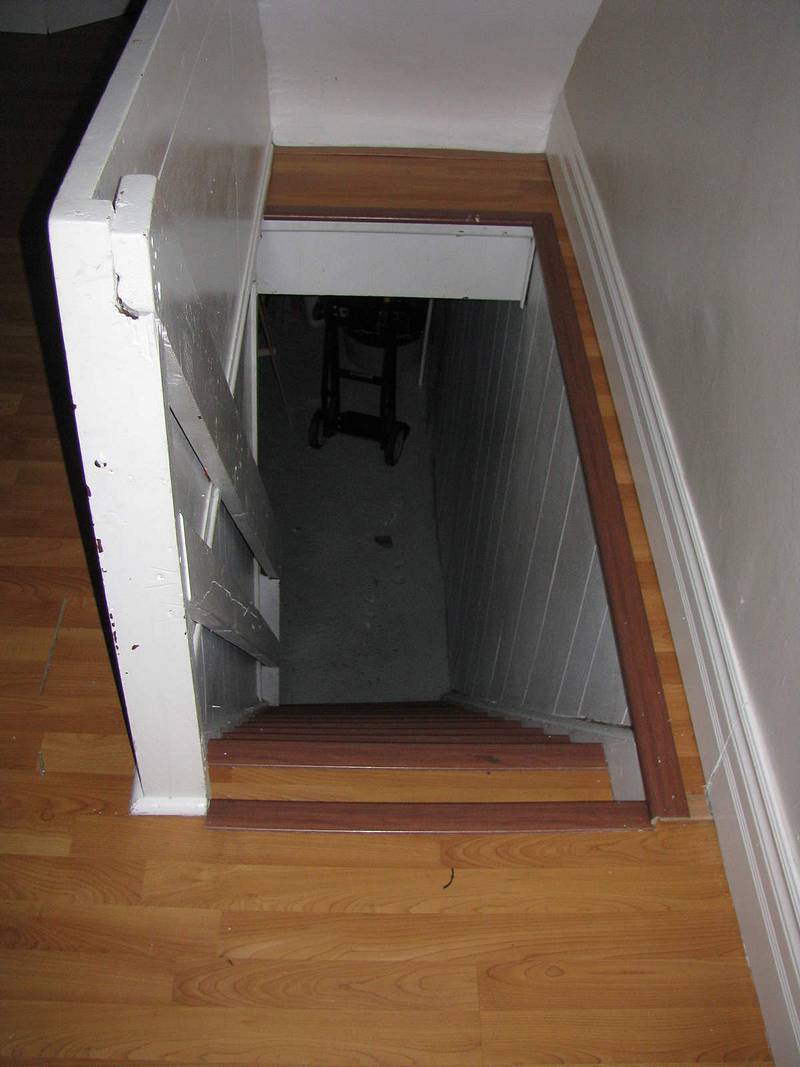 I would disconnect at main cab, so the head kept the hinge.

I would level every connector with a piece of label tape.

I would take photos for reference before I started so I could check.

I would not disconnect anything unless it was labelled.

I slid the cabinets down the stairs taped to a cardboard sled, I'd stand underneath with my shoulder into the cabinet and slowly let it slide one step at a time.

I paid movers to bring them back up.

Oooooh. That's just nasty frolic. My back hurts just looking at that.

For going up basement steps I have a Harbor Freight hand winch with a 30' cable(you can tie a large rope on for more length), it has a "catch" so once it moves a couple inches it holds in place, I have it mounted to a double 2x4 and it goes across the doorway, since it catches you can reposition the machine at any time, probably paid $30 for it. You could keep the 2x4's as close to the floor as possible across the banisters and have your wife watch the progression(you might want to add a few more screws in the banister base plate and put wooden caps over the holes to match. If you can get a clear shot to a doorway take the door off and use that, same thing with a window, might work for you or not. Harbor freight sells an electric remote controlled one also.

Forgot to mention that obviously the machine needs wrapped up securely and use bare cardboard next to the carpet so it slides easily.

Thanks for the replies. The good thing is, most games I'd buy are meant to have the head removed. EM's are easy. I'd just gut the cabinet and carry the glass, playfield and bottom mech board separately. Cabs are pretty light when there's nothing in them.

I invested in a Big Green Egg. Throw a rack of ribs on it and you'll have more then enough help show up. 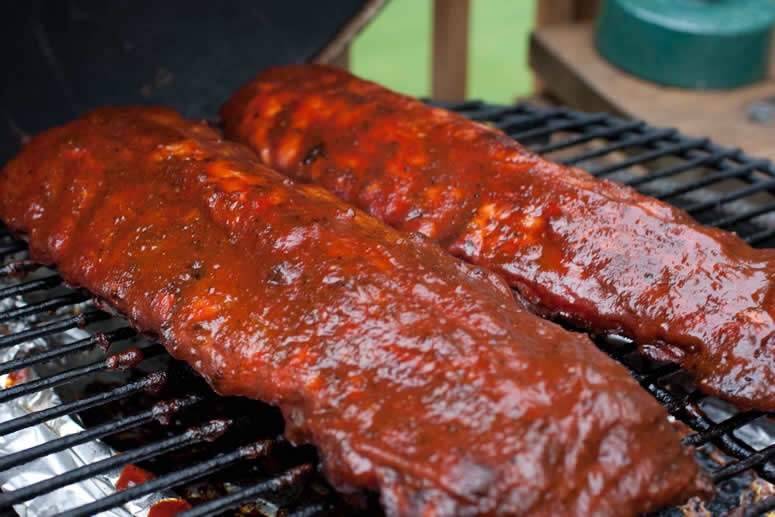 Most of you have it pretty good from what I see in the pics and have straight stairs or tons of clearance. My stairs are horrible and you can't use a dolly and everything has to be done by hand. These pics are from November 2010 when I got my very first pin High Speed and as you can see the dolly is pretty much useless. You have to lift the pin down to that first landing and then shift it over to the right for the last stretch of stairs to go straight down. That corner is pretty nasty because it has these pie shaped steps so the game doesn't sit level and you have to rock the game side to side to straighten it. You can see in the second pic how tight things are and you can barely squeeze a pinky finger on both sides. 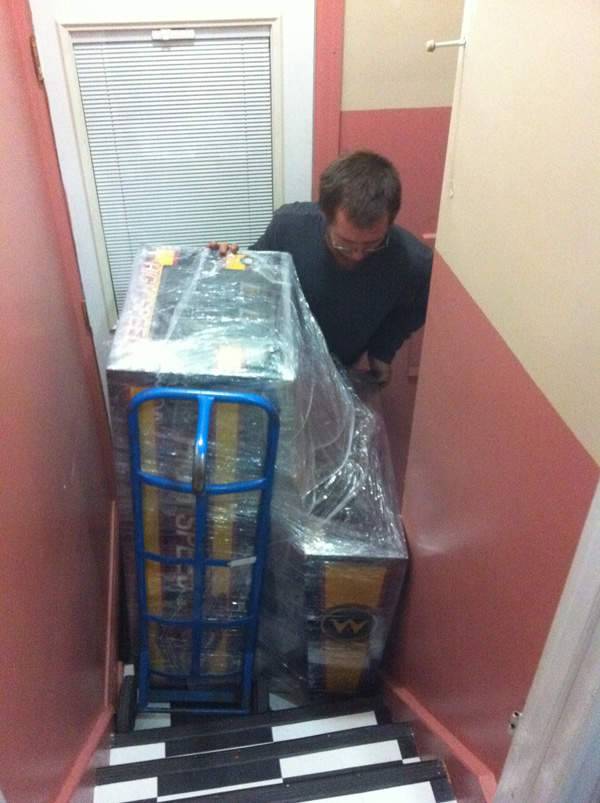 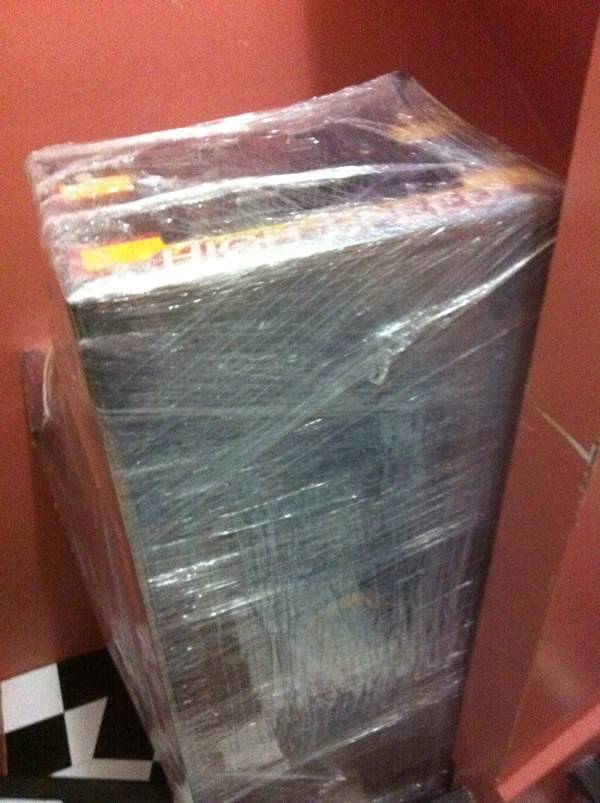 The person I bought my Roadshow from double folded the cardboard between the head and body so the game wouldn't clear at the bottom. Luckily we were able to set the game down and brother in-law was able to grab some tools to remove the slide latch on my cold room door. 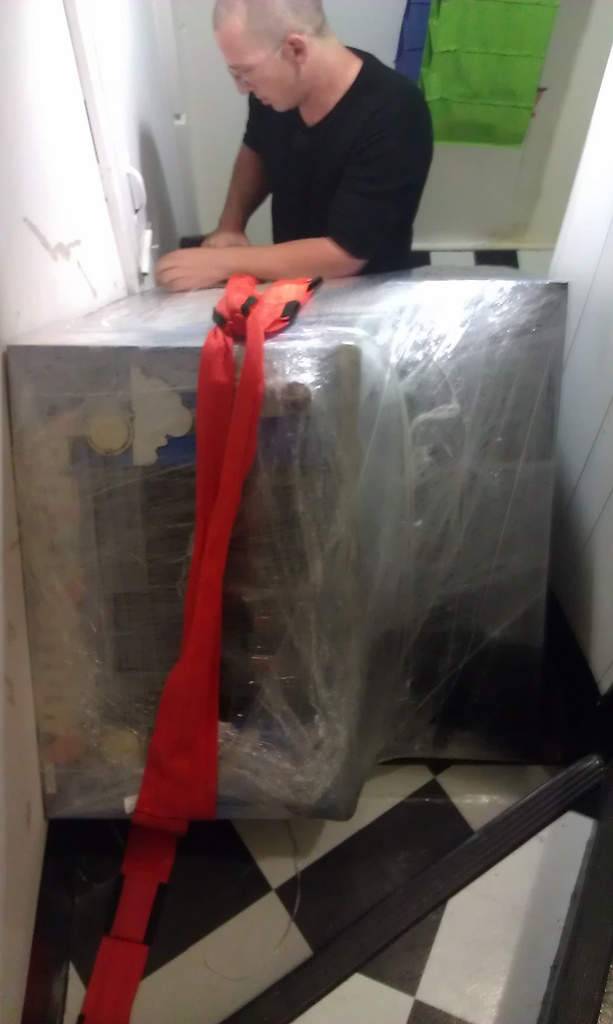 Same thing happened when I bought my last game which was WH20 from a friend who wrapped it before dropping it off. The cardboard he used was so thick that on that last stretch down the walls were holding the game up itself. I should have taken a pic but I was more concerned with what to do next but we ended up just pushing it through and that is why I mummify all my games with shrink wrap. When I move games up I remove the head, pull the playfield out of the cabinet and move everything up in 3 trips.

Anyways, after moving around 35+ pins up and down over the years it me under 5 mins from the time we unload from the truck and down into my gameroom. He's been a big help and as you can see from this old collage I made of my first year in the hobby he is all smiles 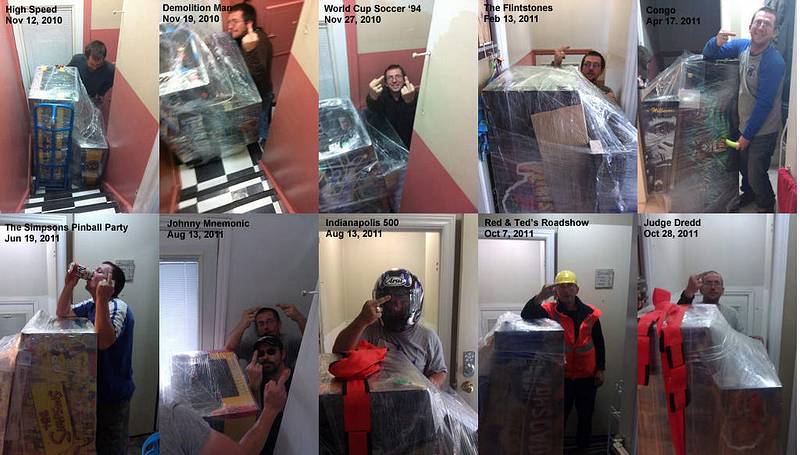 I have never tried moving a pin with the head sticking out on the side like that. The head is always facing away. That looks tough.

strikes me the problem would go away if you shopped them upstairs in the pinball room?

Marcus Trevino took a pin of mine upstairs by himself and look how small he is. I outweigh him by 100 pounds and up until recently went to the gym every day and I had a hard time bringing it down when I sold it.

Going down with a pin is substantially harder than pulling one up the stairs, IMO. There's no way in hell I would try to get a pin down normal residential stairs alone.

strikes me the problem would go away if you shopped them upstairs in the pinball room?

Pins that I get are REALLY dirty and that would make the wife none too happy.

I have never tried moving a pin with the head sticking out on the side like that. The head is always facing away. That looks tough.

That's the only way B/W games will fit and go down my stairs. For modern Sterns I have to rotate it the other way otherwise it won't fit through my doorways since the angle which the head is folded down into the body sticks out more. Stern cab heads also are an inch shorter then B/W. 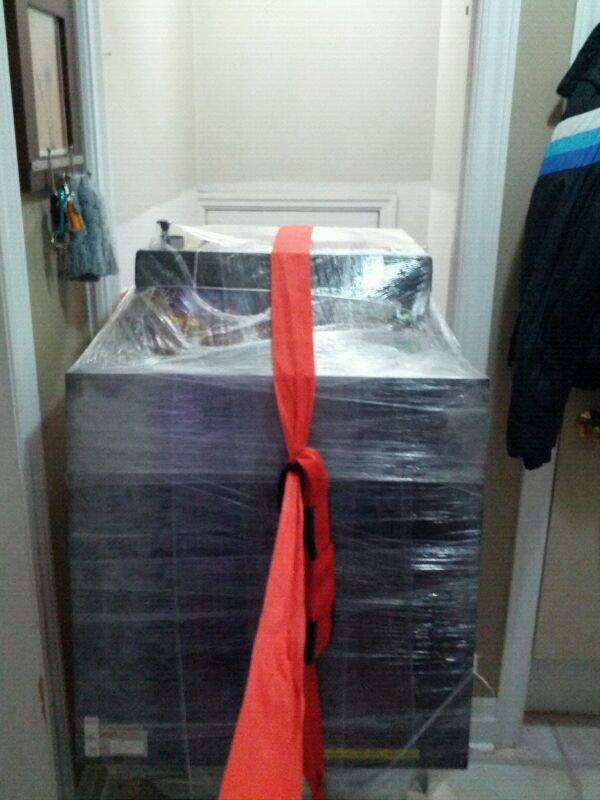 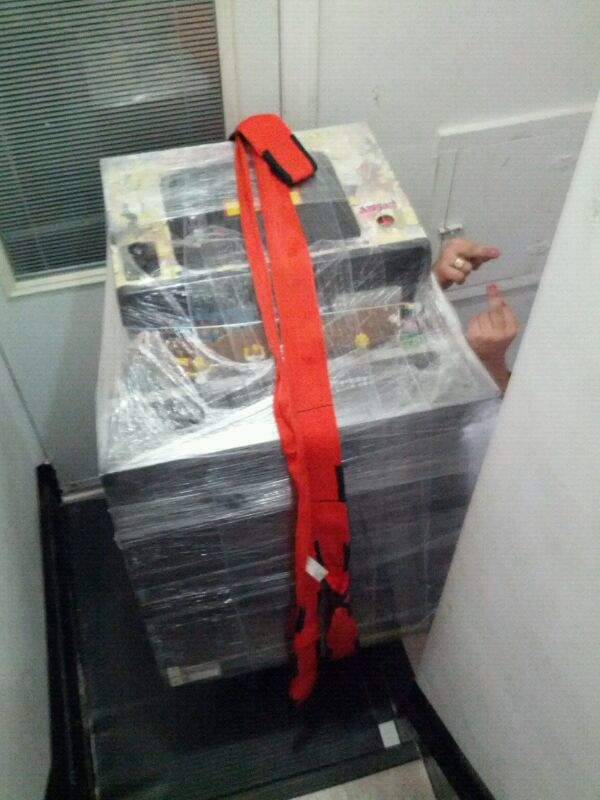 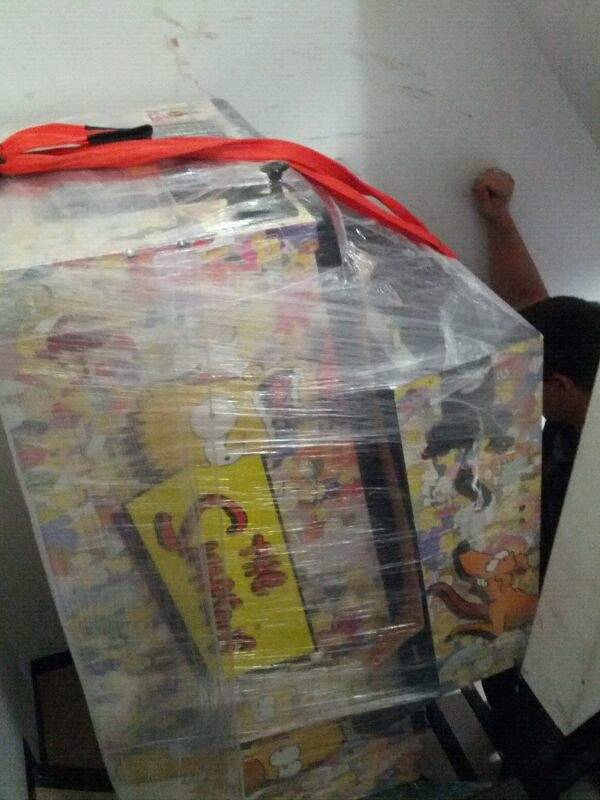 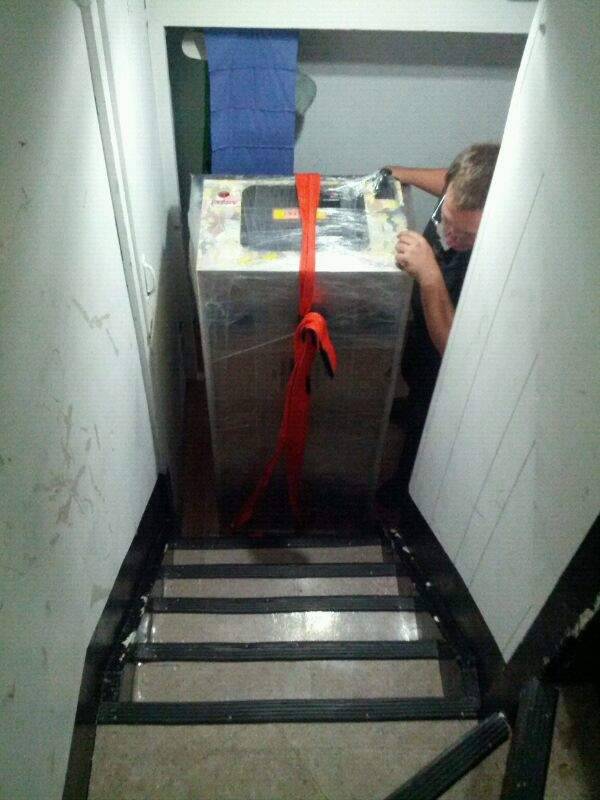 It actually looks more painful in pics then when we are actually moving the pin down. The things we all do for this hobby

I un bolt the hinge from the head. The pivot bolts don't like to come out and require removing a staple from the plastic cap. My Sega and Gottlieb machines were no issue with connectors. Everything only plugged back in 1 way. My williams not so. I had to remove the head to get it out from the house where I bought it and I was in a hurry so I assumed all connectors would only go one way and i was wrong. Lucky I snapped a few photos of the back box wiring before taking it apart.

Most of you have it pretty good from what I see in the pics and have straight stairs or tons of clearance. My stairs are horrible and you can't use a dolly and everything has to be done by hand. These pics are from November 2010 when I got my very first pin High Speed and as you can see the dolly is pretty much useless.

You know what the worst part is? All that pink paint saps all your strength. 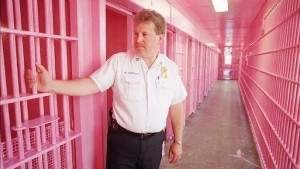 I can't believe people have trouble pulling a dolly with a 275 lb machine up the stairs. That's just shameful for a man.

I have steep stairs in my house. I can move games by myself... but i have to take them all apart with out help. Head comes off, PF comes out and i do them one at a time.

I have steep stairs in my house. I can move games by myself... but i have to take them all apart with out help. Head comes off, PF comes out and i do them one at a time.

Yep, why kill yourself over a pin?

Only takes a few minutes to pull the playfield and head.

Yep, why kill yourself over a pin?
Only takes a few minutes to pull the playfield and head.

I moved pins for 13? years with an appliance dolly and brute force. It worked. But I'm also 13 years older.

A local buddy found a loaded 1200# Escalara on CL for a great price, and we split it. Came with the forklift, big wheel attachment, and plenty of other bonuses.

The first pin I moved, I realized it was worth every penny, and then some.

I like to have a 2nd person, just in case, and to spot me, but one person can do it. The big deal is balance, it takes awhile to get used to the escalara. I'd urge anyone who is likely to move a lot of games to have one of these.

I used to have a Dodge Ram with a liftgate. Some day, I might like another one

I'm lucky I have a walk out basement...But seeing this thread makes me want to get an escalera just for the heck of it...That thing is sweet.