Posting here incase someone can help.

We bought a lowish-priced 1992 Williams Fish Tales from a vintage arcade shop. It’s our first pinball machine and it’s in relatively good condition, but missing a fish topper (which I was intending to try to make). We’re in London, UK.

It’s supposed to be in full working order, but - after several games - we noticed that the ball was getting consistently jammed between the left slingshot and the mini-post (see picture). It’s getting REALLY jammed. As in, every time the ball goes between the mini-post and left slingshot, you have to switch off the game and manually free the ball.

We’ve spoken to the guy who sold us the machine and I’ve posted on the Fish Tales forum. We’ve also tried a bunch of ‘debugging’ fixes.

1. Levelled the machine with a spirit level incase the ball wasn’t moving fast enough when it got to the cover;
2. Checked the online manual and measured the rubber size on the mini-post;
3. Switched the small rubber on the left-hand and right-hand mini-posts;
4. Taken off the plastic slingshot cover to see if I can move the small yellow post beneath the slingshot, or the metal mini-post (we can’t from the top of the machine).

Skills-wise: I’ve got a UK High School qualification in electronics, but it was a long time ago now. We don’t really have experience doing major rebuild or fixing jobs - the biggest things we’ve done involve paint stripping and refurbishing original wooden floorboards (so, not terribly relevant). 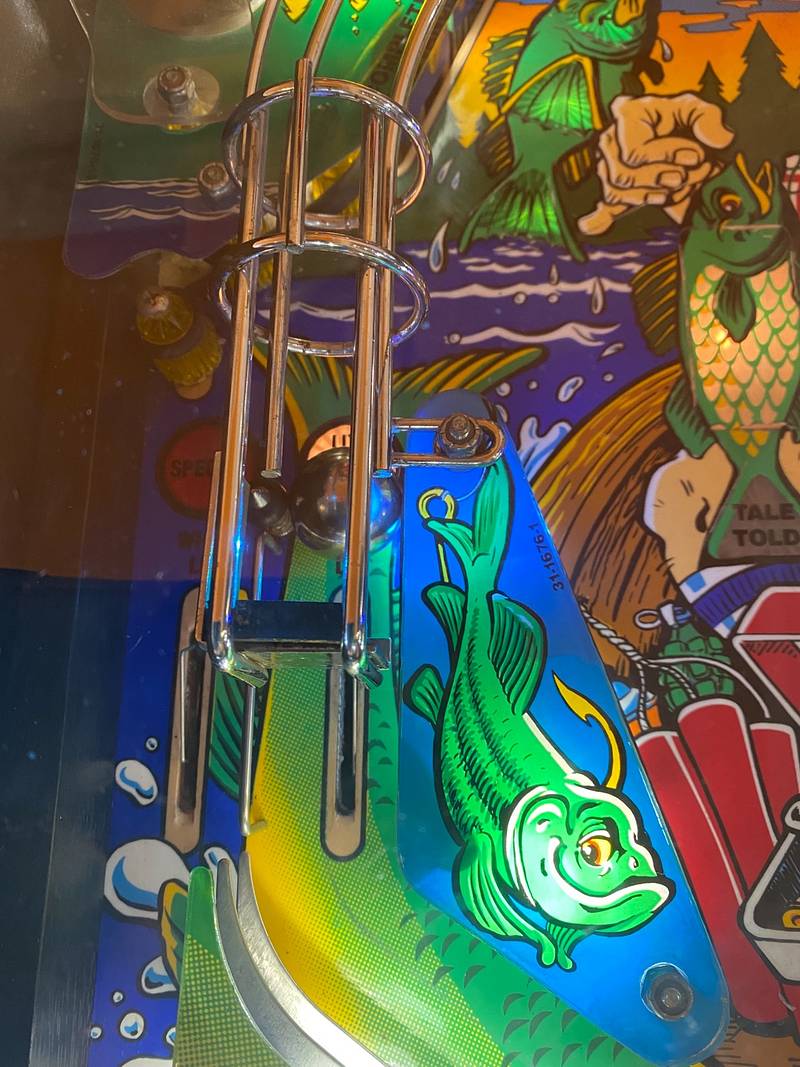 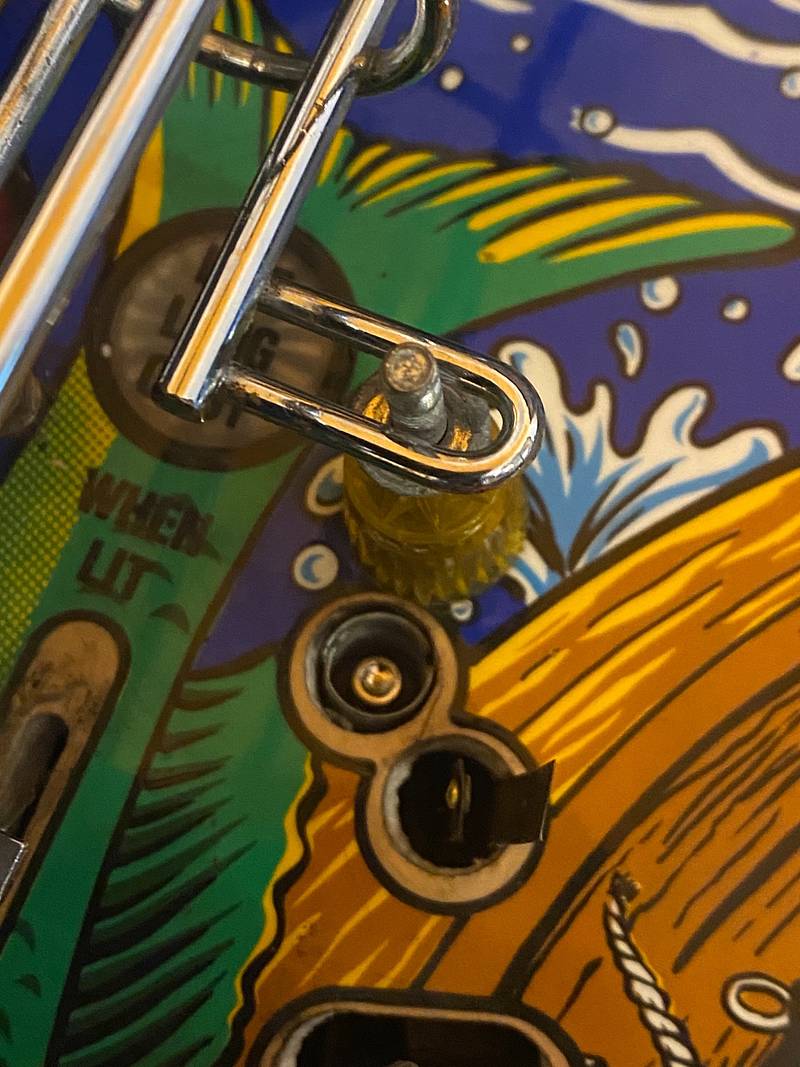 For now, just remove the rubber from the post between the inlane and the outlane. Loosen the yellow post above the "special" insert and move it down as far as possible (which will be a few mm) to compensate for the loss of bounce due to the now missing rubber.

For now, just remove the rubber from the post between the inlane and the outlane.

You have the wrong size metal post installed on the upper slingshot. It is too short. The plastic should be higher than the ball. Compare how close the plastic is on top versus closer to the flipper. It should be the same. Look at your right slingshot to compare.

Preferably you replace the post, but you may get by if you put a couple of washers between the star post and the plastic. This assumes you have enough protruding to be able to put the nut on.

justdavid Do you mean the mini-post, i.e. the 02-3905 (https://pinparts.co.uk/products/mini-metal-post-with-woodscrew-fixing)? They’re both the same size and shape either side of the playfield - we’ve measured the height. We’ve also checked the appearance of the part against the manual.

The yellow star posts look pretty standard across several points on the machine and are listed as an 03-8319-9 in the manual.

LTG Huge thanks for your help. Apologies, I didn’t realise you meant removing the rubber from the mini-post and then unscrewing and adjusting the star post at the top above the ‘specials’. I assumed you meant adjusting the star post at the top of the slingshot? I was hoping for a fix that didn’t leave a naked chrome post as, at some point in the machine’s history, the ball presumably drained freely, and something has now changed to make it not do so - so, I was hoping to fix that thing.

I’ve now ordered a couple of white silicone slingshot rubbers in the hope that it’s the replacement rubbers that are too thick.

You now have a much better access to work on the playfield.

The distance between the star post and the chromed post is roughly 47 mm on my machine, you can also see the height of the plastic (with a protector below it) is about 27mm. The ball still has about 3mm play between the rubbers.

**** don't raise the playfield too high if you haven't heard the loud click or it won't stay up properly. To replace it, lower the playfield back on the cabinet and push it back in all the way. 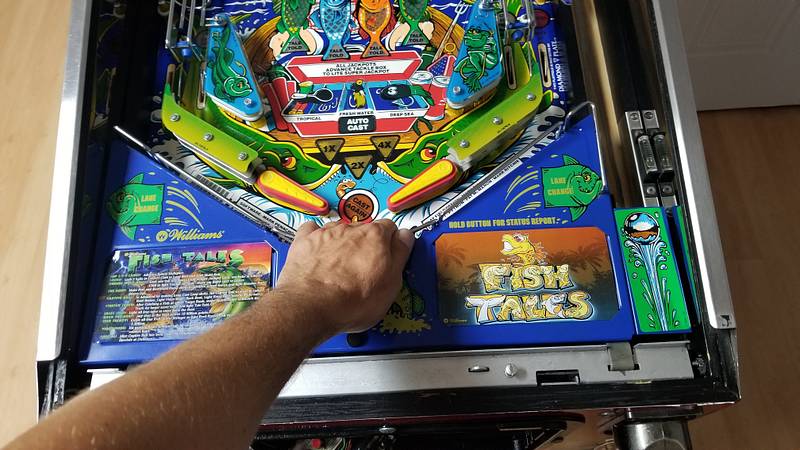 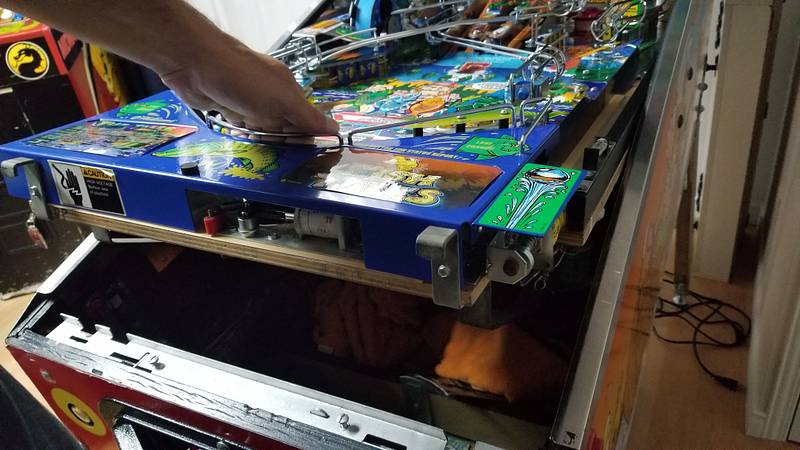 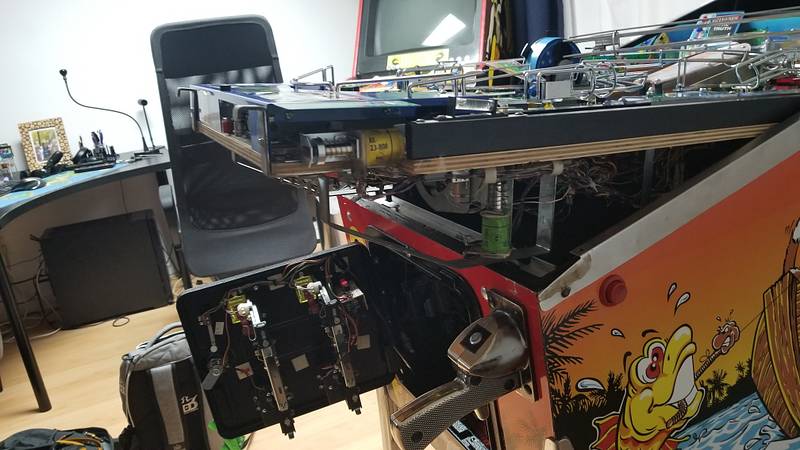 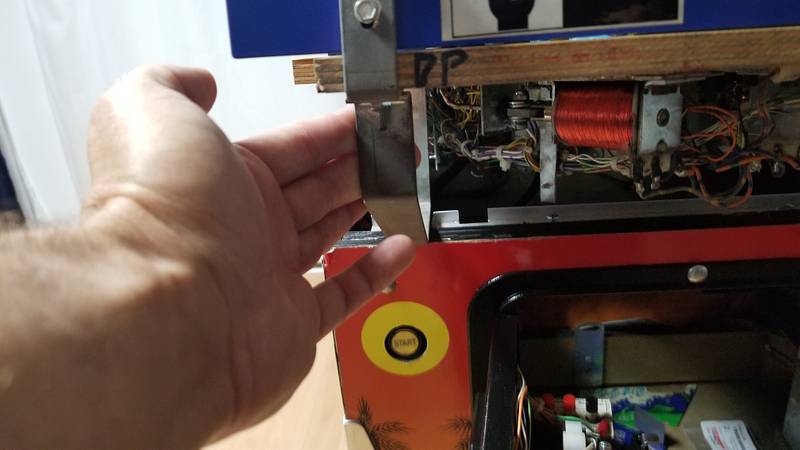 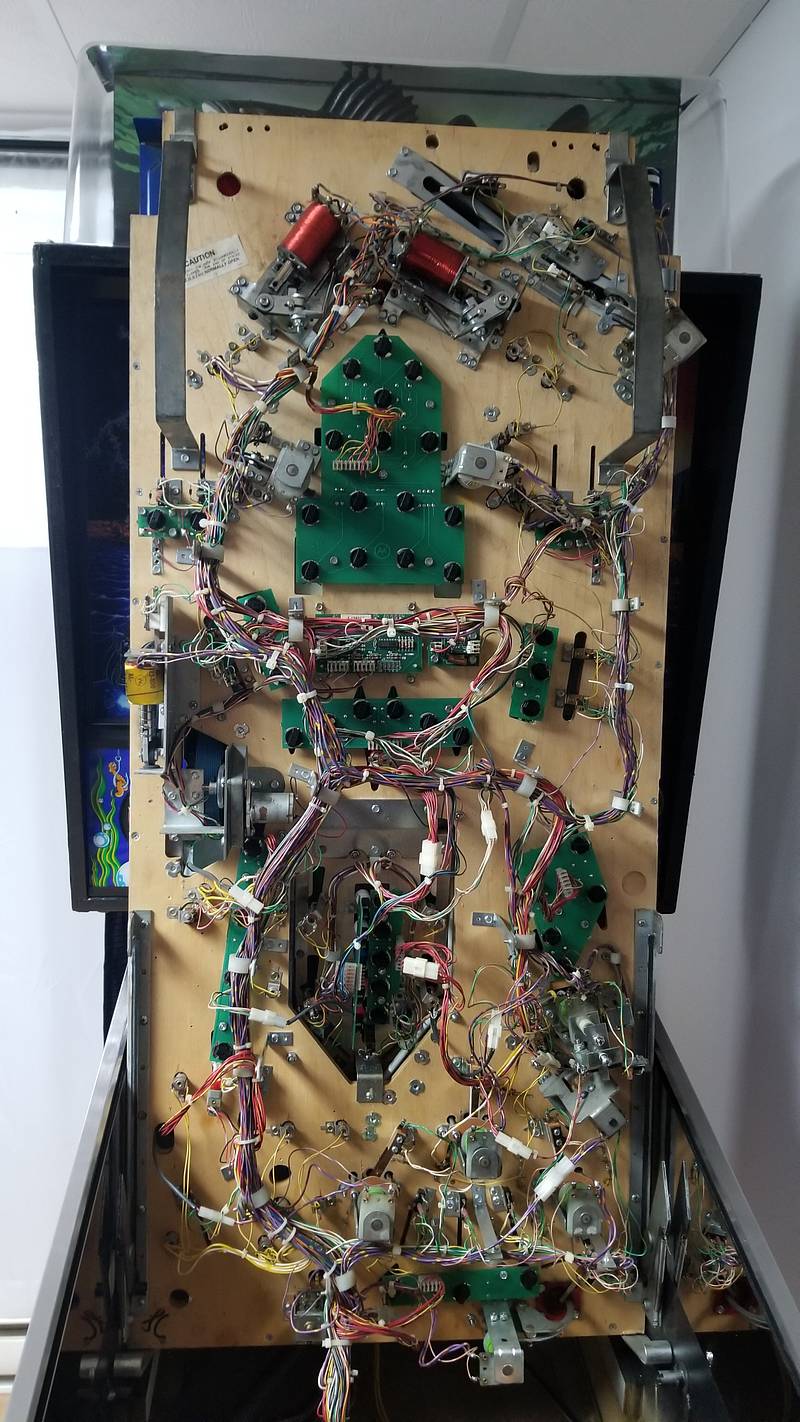 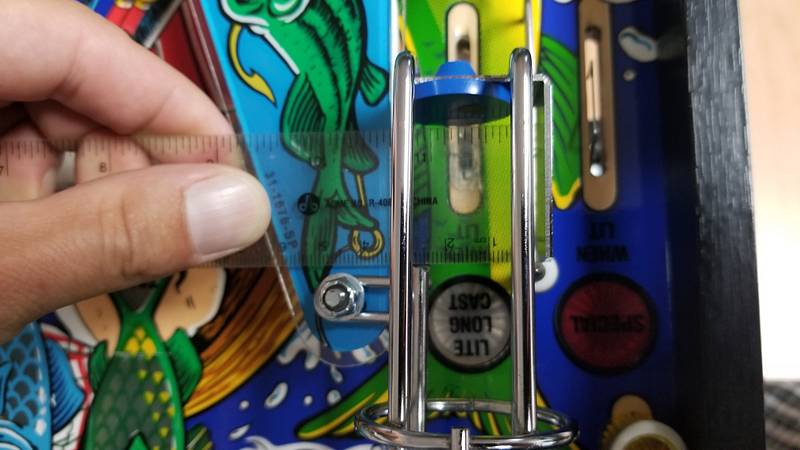 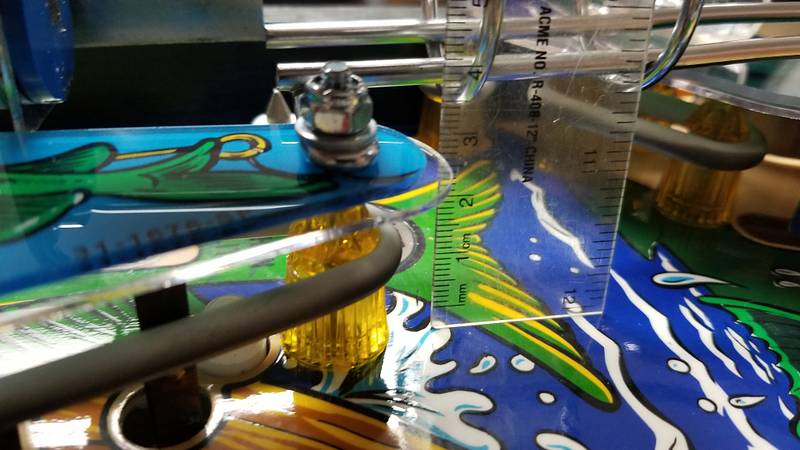 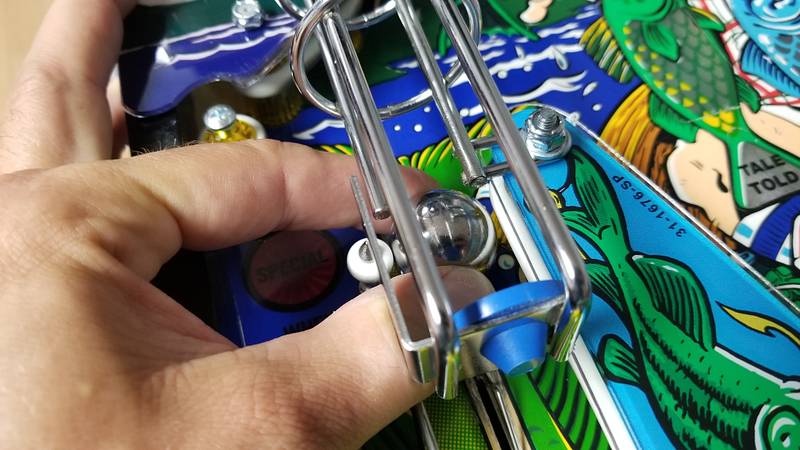 Sorry to jump in, as you raise the play field put your hand in the shooter lane and catch the balls as the fall out so the don’t break anything. I didn’t take measurements but my ball has about the same clearance between rubbers as Roamin’s. 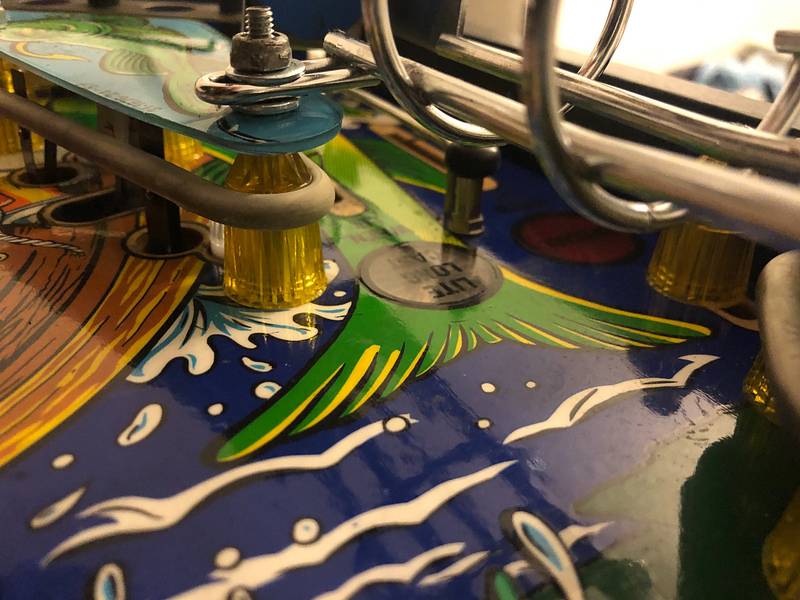 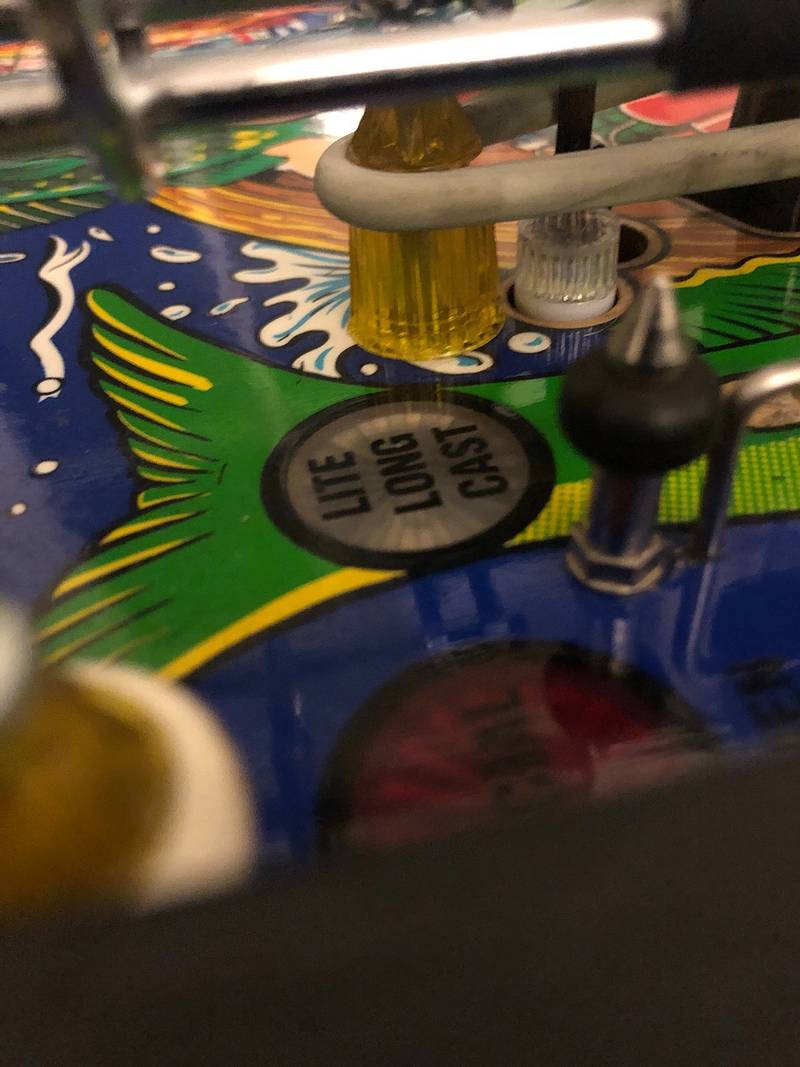 Maybe try a different star post, it might have been over tightened and distorted at some stage.
Don’t stress there’s always a solution and when it clicks you’ll kick yourself for not finding it sooner. Biggest piece of advice when you start tinkering is don’t get frustrated and force something, particular on parts that go through the playfield. If it doesn’t go together easily on pinballs it’s not meant to be.

All the star posts are identical on the playfield , so you can swap them as you wish. It could be out of shape , pushing the rubber further out , but that sounds to me like near impossible because the groove exactly where the rubber is in the corner would have swollen enough to push on the rubber? If this particular plastic post can swell up in such way , then wouldn't the whole playfield be affected as well.. And from the pictures it doesn't seem to be damaged in any particular way. Also , I am by far not a pinball expert , but are there really thicknesses to rubbers ? I always assumed that you go by the size of the diameter and the actually thickness of rubbers remain pretty much the same. The right size for this rubber really is 7/16" and if you ever order replacement kits , that's what you will receive. I tried comparing the position of both posts from your pictures and there doesn't seem to be anything wrong with the placement of the posts themselves, although it was a bit hard to judge from 2 pictures alone, but I compared the edges of the star post and metal post and they seem to line up.

Things I would look for :

Compare the rubber size to the one on the right lane , as they are identical. Maybe grab the rubber from my picture and swap them , as again this is the same size rubber as the posts.
Check if the metal post with the black rubber is actually straight and not slightly crooked? It is simply screwed in the wood of the playfield and could have easily been bumped and crooked in the wood.
I would remove both metal posts from left and right lane and compare them , as they are identical.
I would double check the size of the balls ? Maybe someone just shoved a non pinball in there ? Like a normal ball bearing they found somewhere ?
Is the right lane affected as well?
I would take precise measurements of distance between both post on both lanes to see if anything differs drastically.

I really can't see Williams just getting rid of a machine because a post was just a few millimeters off.. If the right rubbers are on (originally they are white and not black) then not much can be wrong. It's either crooked posts or one is just misaligned and just needs to be tightened with a bit of outside pressure to gain the few millimeters you are missing. 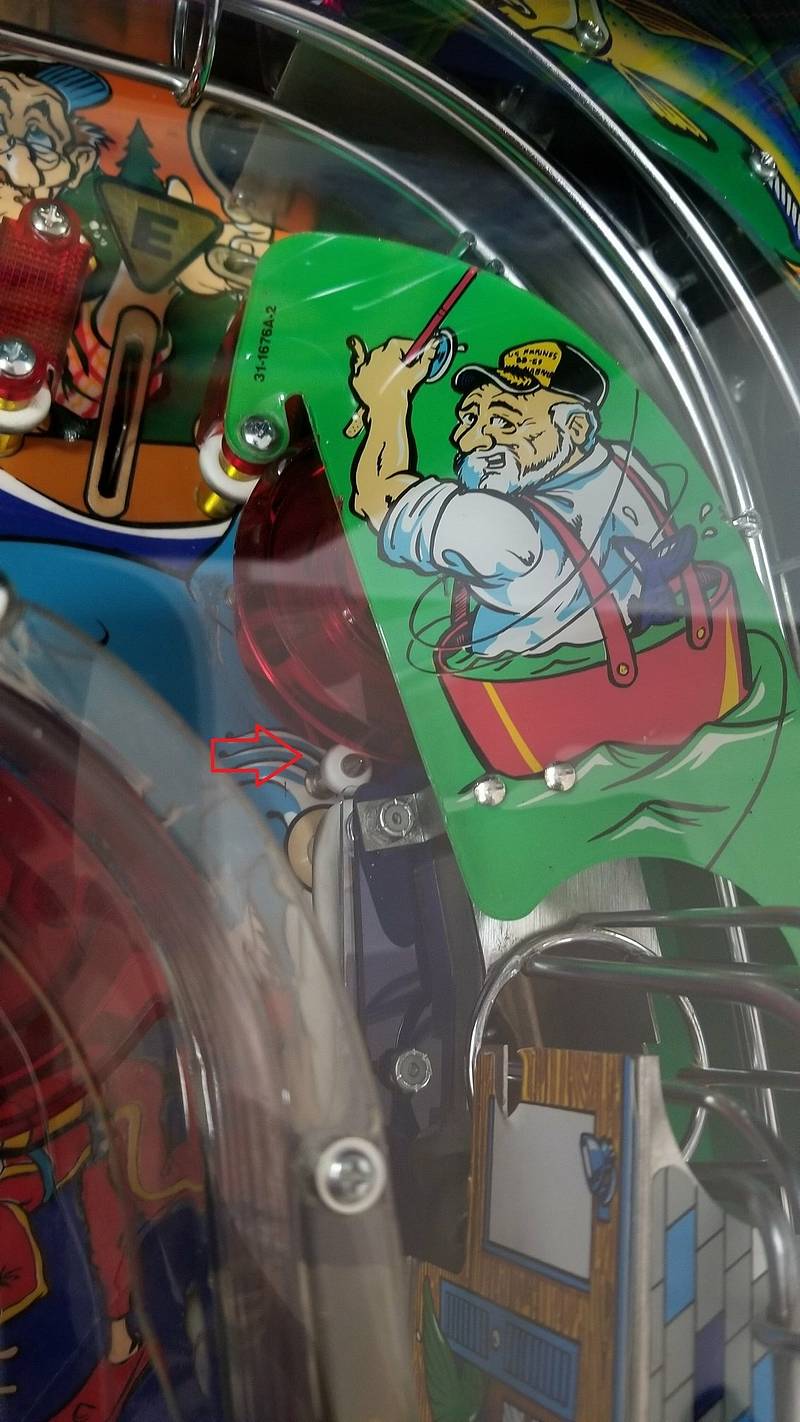 Huge thanks, everyone. This is really helpful, not least because I've had the chance to look at your playfields around the slingshots - and, thus, to understand what might be wrong with mine. I've also pulled up my playfield and had a quick look underneath.

The distance between the mini-post and the centre of the yellow star post on the left-hand 'fish' slingshot, which is getting jammed, is ~4.7cm (see picture). I've also measured the height of the top of the slingshot (see picture) and I noticed that one of the ramp washers had been placed under the plastic 'fish' cover - rather than on top. Unfortunately, moving this to the correct location didn't fix the problem (it obviously made no change to the rubber or star post).

My star posts don't look distorted and they all look pretty similar (see pictures. You can see a 'stuck' ball in the second of those pictures). In general, the playfield is a bit grimy to the touch, but otherwise in good condition.

The metal mini-posts are both the same height and width on both lanes (the left 'fish' lane that jams and the right 'frog' lane that doesn't), and - upon visual inspection - matches the correct part number in the Fish Tales manual. We've done a visual inspection to see if the mini-post on the left looks bent (it doesn't). I've also checked the underside of the playfield and everything looks okay down there - no obvious tampering or damage on a quick inspection.

The big thing that looks different between your playfields and mine is that my rubbers are, obviously, not original. I have black rubbers on the slingshot and mini-post, and I have an odd feeling that the rubbers on my machine look looser and bulkier than the ones on the machines above. They don't seem to quite fit into the notches/grooves on the star posts. According to the manual, the mini-post takes 7/16" rubbers and the slingshot takes a 2 1/2" rubber. So, I've ordered a couple of brands (Perfect Fit silicone and ordinary rubber) of white slingshot rubbers in 2 1/2" and also a 2" white rubber, and I've also ordered a couple of 3/8" mini-post rubbers (so 9mm wide instead of 11mm). I'm afraid that won't work, but - right now - I'm completely at a loss (apart from dismantling both slingshots).

[NB: I also checked why the chrome ramp wasn't sitting in the same place on both sides - the 'fish' side is several mm further in. It's due to the positioning of a plastic fish ramp/cover further up the playfield - nothing to do with the slingshot]. 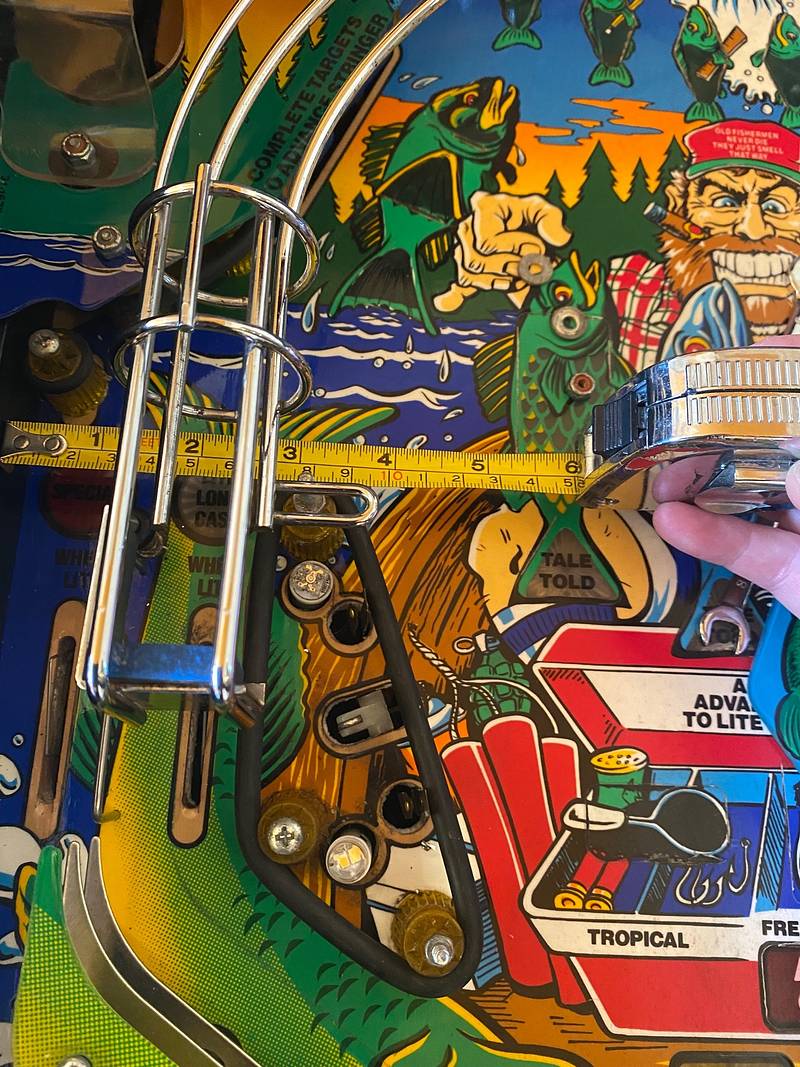 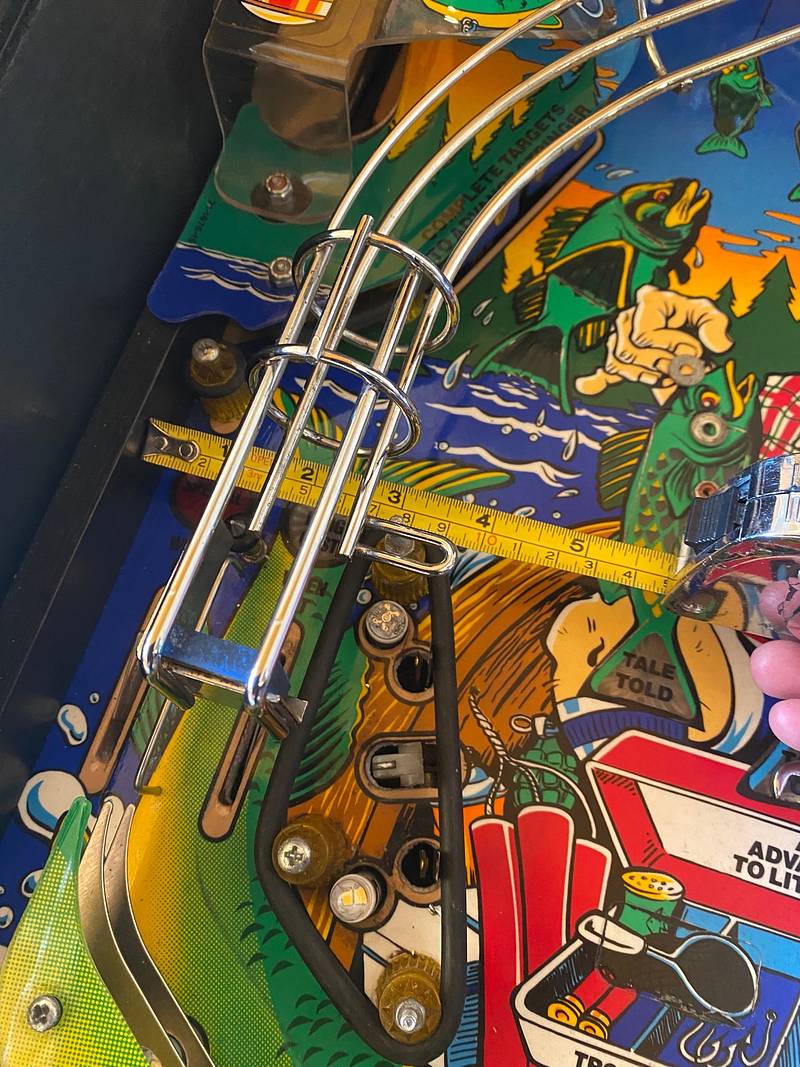 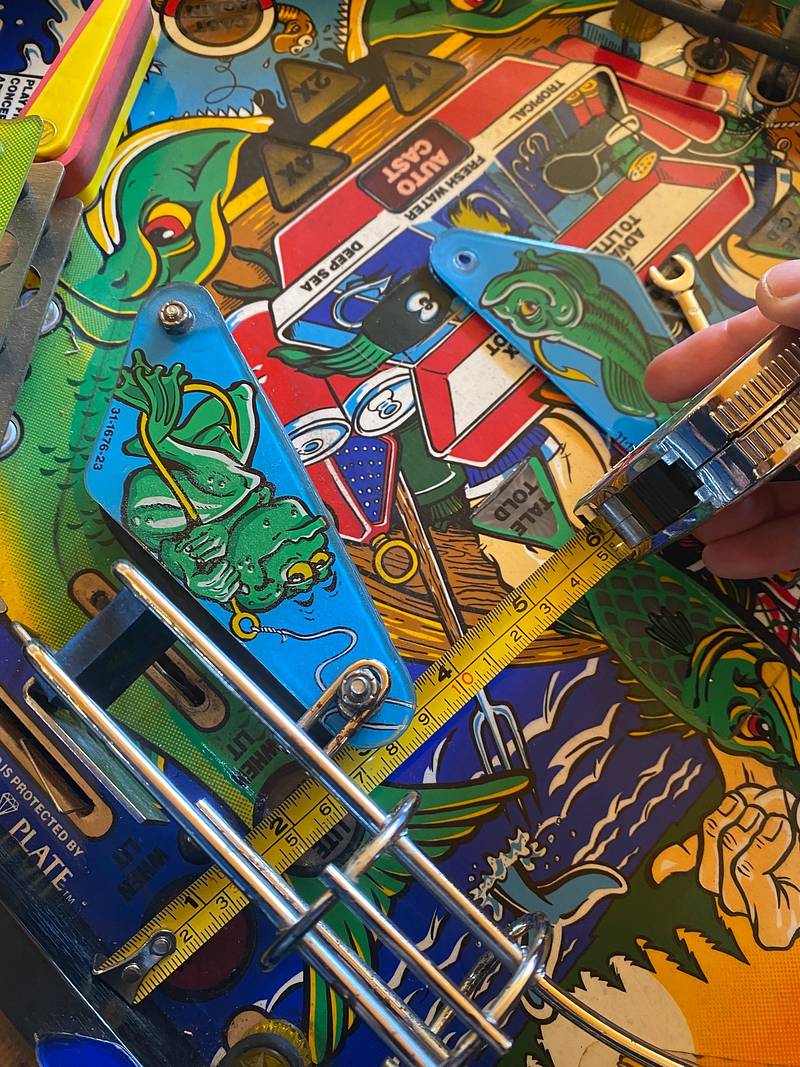 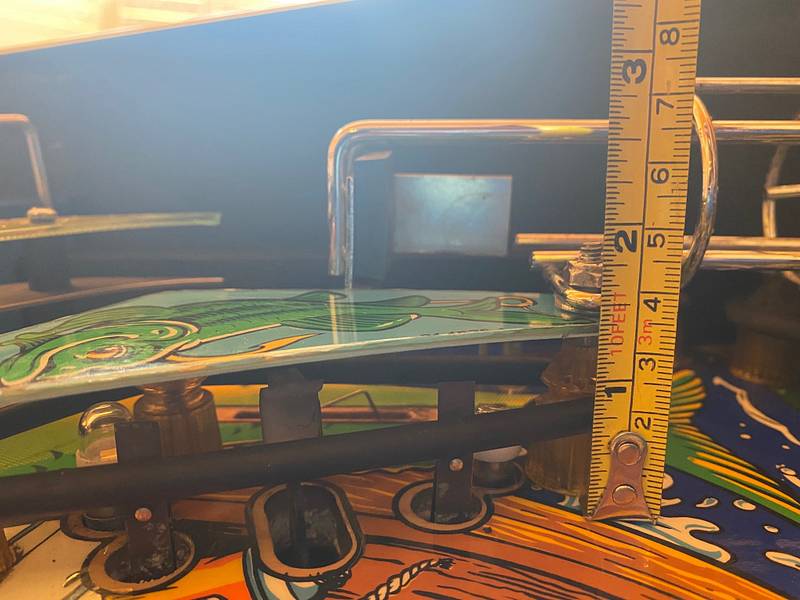 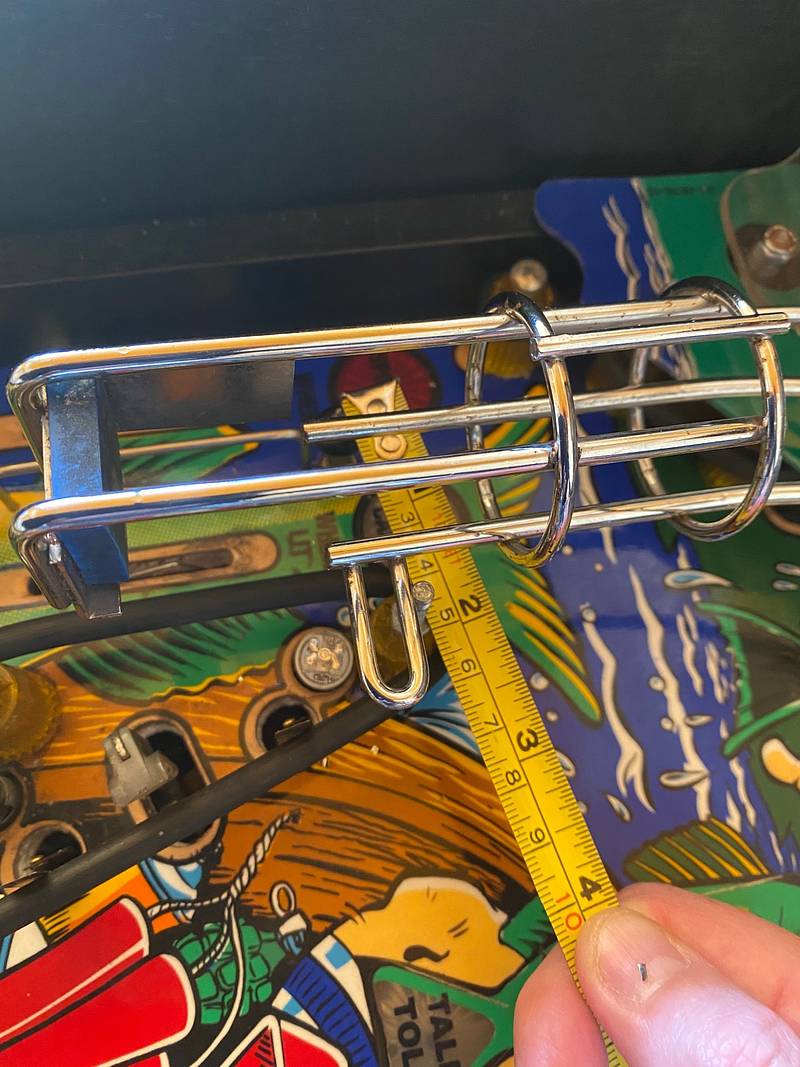 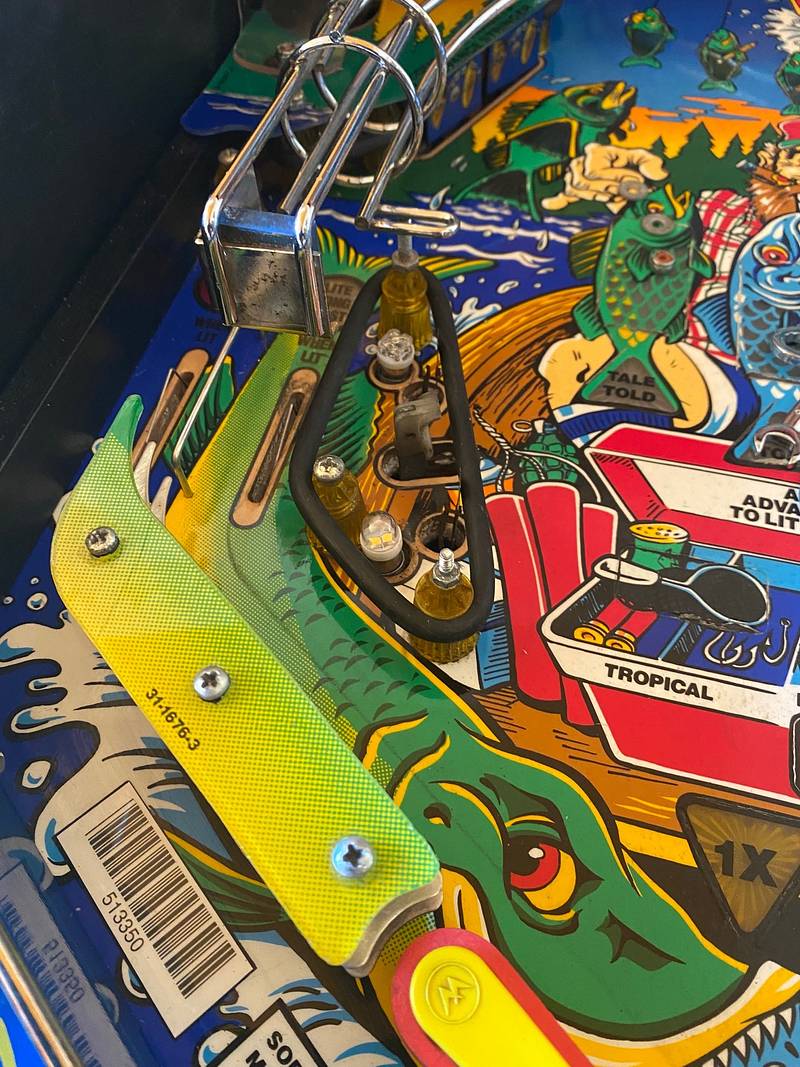 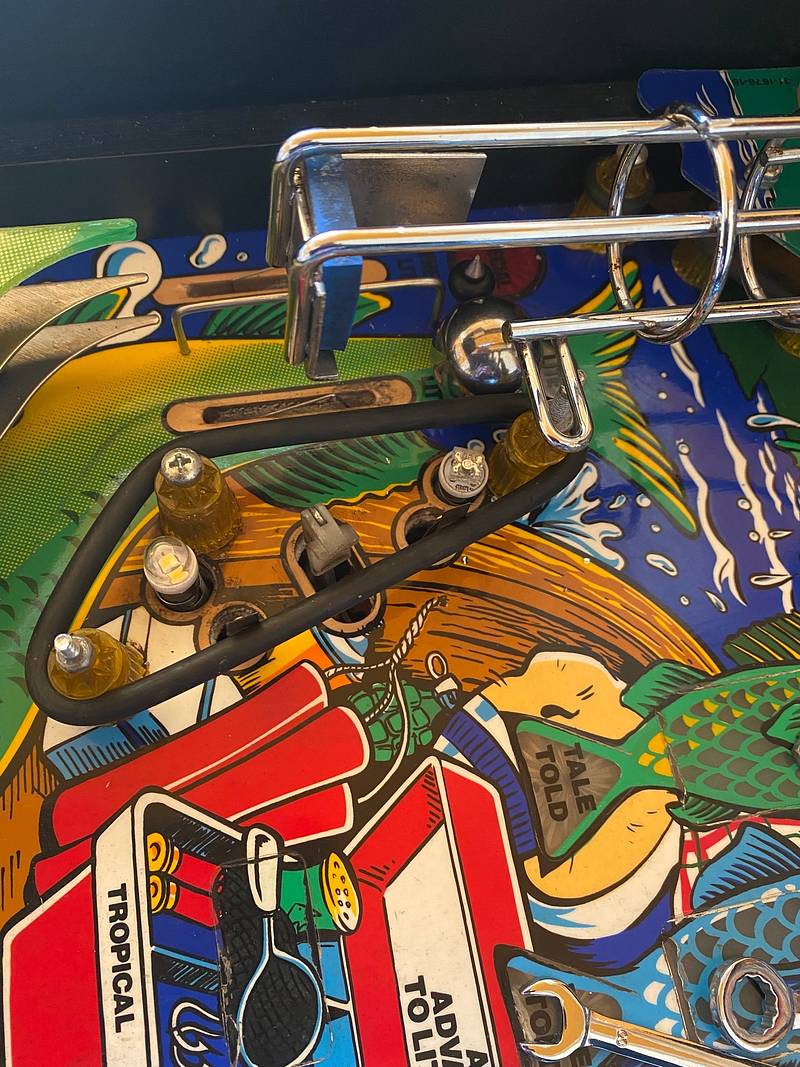 Looking at your new pictures , the black rubber for the slingshot definitely looks too thick. It doesn't sit on the star post correctly at all. You should order something like this and change all the rubbers. https://www.marcospecialties.com/pinball-parts/RK1256-1

If your reel acts up, you should also try changing the drive belt : https://www.marcospecialties.com/pinball-parts/03-8614

+1 for new slingshot rubber will solve the problem.

Lo and behold, upon replacing the 3” rubbers with 2 1/2” slingshot ones, the ball drains just fine.