Hi, I managed to buy a Gilligan's Island, and have cleaned it and had it working but unfortunately I managed to screw it too

Nooby of me, I tried to adjust some switches of the playfield WITH THE MACHINE TURNED ON and one column of switches stopped working. I changed U20 on the CPU Board and the column is working again but I noticed that although the flippers are working, they won´t change lane and also won't allow to change initials when entering a highscore.

I rode somewhere that U7 and U8 on the Drivers Board were to blame so I changed them too, but the problem is still there. So far I've checked that J211-3 and J211-5 are connected to J209-1 and J209-2, I´ve checked that shortcircuiting J207-1 and J209-1 reads as switch 11 on the switch test and J207-1 and J209-2 reads as switch 12 as I guess it should be, so I guess the CPU Board is not to blame... or maybe it is because, funny thing (and one I don´t understand) is that shortcircuiting J211-2 with J211-3 and J211-5 (one at a time) reads on switch test as R1 and R2... I don´t know how the CPU handles the flipper activation and switch activation, so I don´t know it both R1 and 11 should activate at the same time for one flipper or what else is going on... What I've found is that disconnecting the data wire from CPU to Driver Board will make flippers stop working, strange for me since all cables from flipper buttons are running to the Driver Board.

Also, the last thing I´ve checked is the voltage between J211-2 and J211-3 (where is connected one of the 4N25 at U7 or U8 on the Driver Board) and that voltage is near 12 V whether is the flipper button pushed or not.

Any ideas? Thanks for your attention.

Strange the U7 and U8 should resolve it (chip tied to lane change).

Does EOS switch come up in switch test? They are tied to the trigger of the feature i think.

Strange the U7 and U8 should resolve it (chip tied to lane change).

Does EOS switch come up in switch test? They are tied to the trigger of the feature i think.

No switch comes up on switch test when the flipper buttons are pressed. I intend to double check the installed U7 and U8 thou I don´t know how

Also I´m just heading to my garage to do a factory reset and see if that changes anything. Thanks for the quick reply.

Are the flipper switches making good contact with the second lane change switches? There should be two switches on both flipper buttons. Unlikely that both would be malfuntioning at the same time though.

Factory reset did nothing

Are the flipper switches making good contact with the second lane change switches? There should be two switches on both flipper buttons. Unlikely that both would be malfuntioning at the same time though.

The flipper buttons have only one switch each one, two wires coming from the button to a connector with three wires on it. Pics added, sorry for the poor quality. 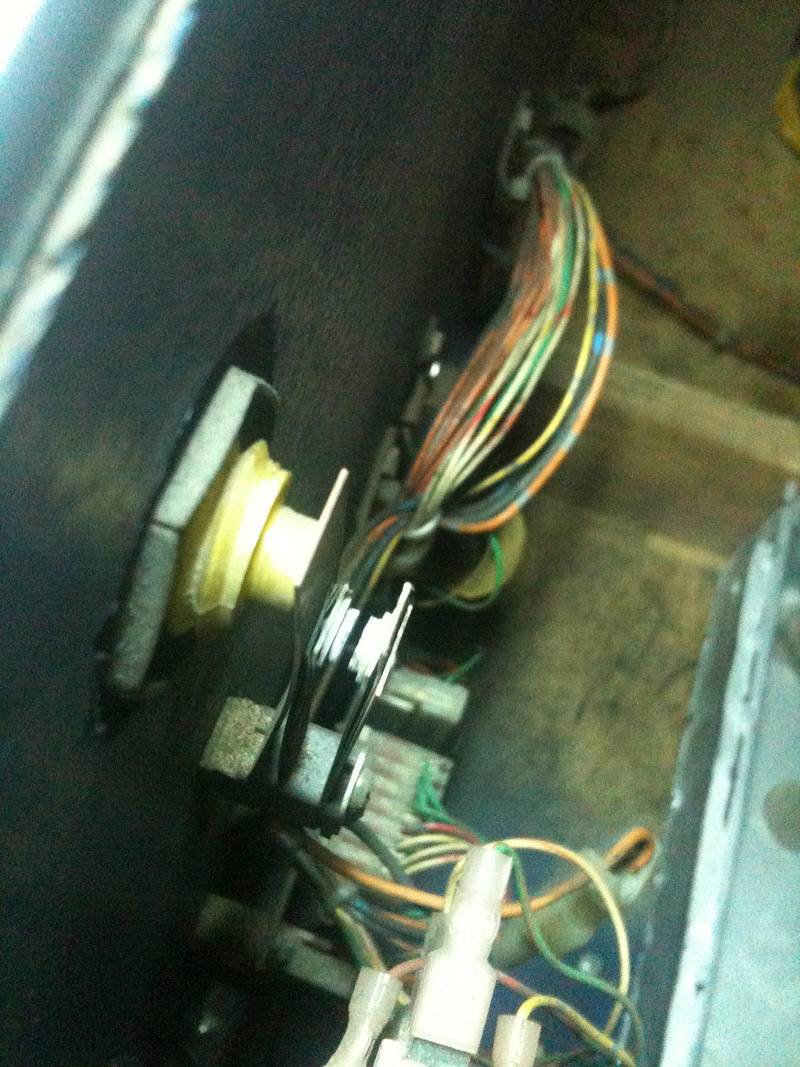 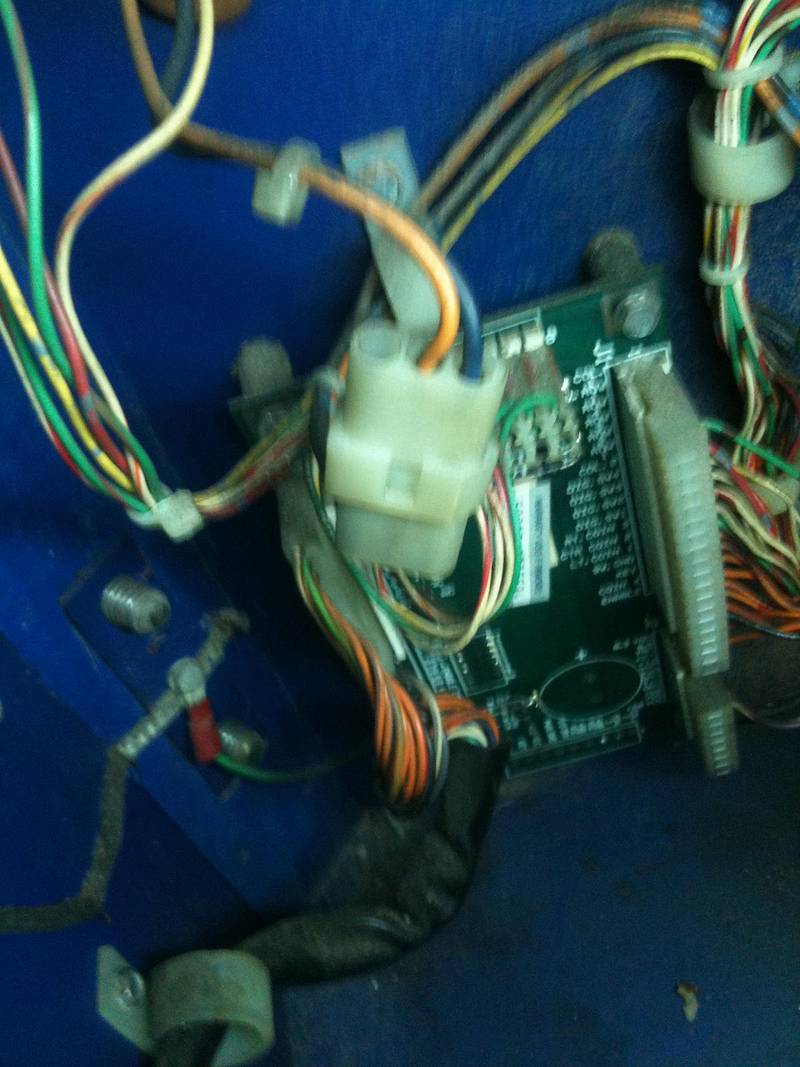 Oh, I see. Thanks for that. It must be just older games that require two switches then.

I had the same problem on my T2. I fixed it, after a while.

Gilligan's and T2 are both pre-fliptronic games and need the components I listed.

I had the same problem on my T2. I fixed it, after a while.

Gilligan's and T2 are both pre-fliptronic games and need the components I listed.

My Gilligan's Island already has those components, it was working perfectly fine before I broke it

Anyway if someone could point me to a way I can be sure that the CPU board is working I'll be glad, or which other components handle lane change and initials at highscore so I can try to change them... As I said I get constant 12V on J211-3 and J211-5 which I believe are the outputs from U7 and U8, but maybe I'm missing something and those are no outputs but inputs. I don´t know if that voltage has to change when a flipper is pressed but it's not changing at all, unless it is a fast change my multimeter can't detect. The thing I don´t get is how is this whole thing working? If the wires from the flippers are going directly into the Power Board then why should they stop working when I disconnect the Power Board from the Cpu one?

Some other doubts I have: on the Power Board too (pics attached) there is a little shiny ball that is fitted between a capacitor and a cooler, don´t know if that is supposed to be like that. The other doubt is a diode (D39) that is not conducting in any way, it shows in my multimeter as 0.6 in both ways but it is still mounted so maybe it's caused by near circuitery.

Thanks for the answers! 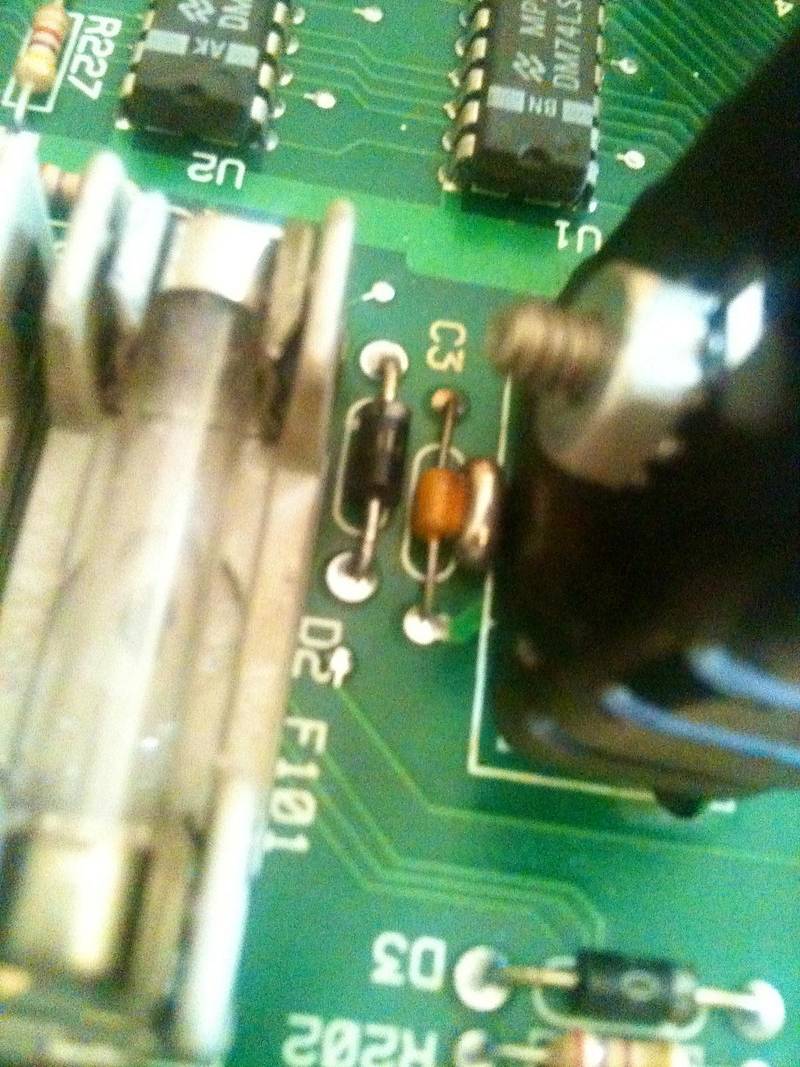 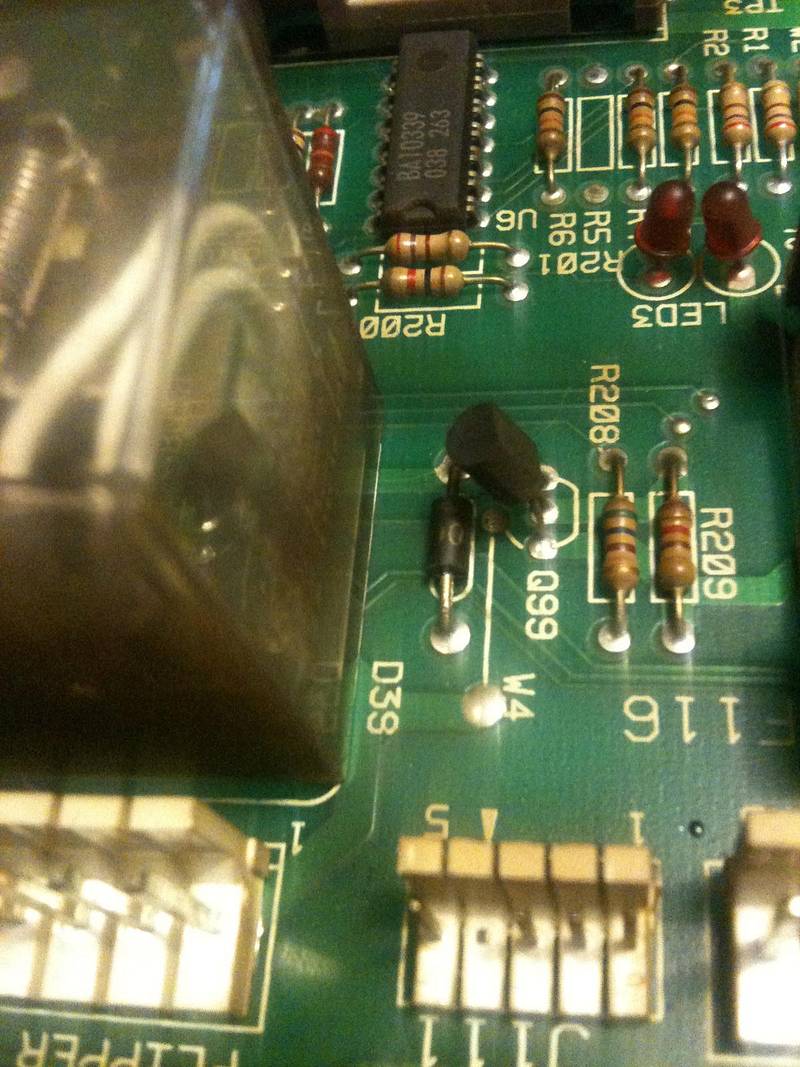 Looks like a solder blob down by that cap. I'd try to melt it out using a solder sucker. You can't do an accurate check of a diode in circuit. De-solder one side and check it. Trace the wires back from the flipper switches to your power board and see if the level changes when you push the button. From there you can trace the signal back through the components. Sorry if this is too simplistic, I don't know your electronic skill level.

Looks like a solder blob down by that cap. I'd try to melt it out using a solder sucker. You can't do an accurate check of a diode in circuit. De-solder one side and check it. Trace the wires back from the flipper switches to your power board and see if the level changes when you push the button. From there you can trace the signal back through the components. Sorry if this is too simplistic, I don't know your electronic skill level.

I think the best way to test if the flippers are activating U7 and U8 should be voltage mode between the exit pin and some test point, isn't it?

Also if I´m getting things right (and I'm still not sure I am), looking at the schemes it seems U7 and U8 are always 'ON' shorting Column 1 with the proper row for each flipper because if the flipper button switches are open, the current has to go thru the 3.3K resistor and to U7 (or U8) thus activating it. Whenever a flipper button is pressed, the current finds a lower resistance way thru the button switch and leaves the U7 (or U8) deactivated. It's strange for me since I always thought that switchs were shorting columns and rows when activated and not when deactivated... Maybe someone can clear this for me.

i've been following your progress. i'm interested to see what happens. keep updating with pics and blog delco!! i believe i may need to look into one of my machines..its doing the same issue.
hasn't gone out completely, but it sounds like the exact problem.
thanks!

Well Ballsofsteel, I'm proud to say I have found it!

First of all, I thought that if all the switches on Rows 1 and 2 were working except those two of the flippers probably U18 on the CPU Board was not to blame. You are not being changed today, U18! Long live U18!

So I turned to the Drivers Board and I checked all the voltages on U7 and U8 where I could see they were just doing fine. It's not that they are continuosly 'ON' with the flippers buttons UNpressed and they switch to off whenever a button is pressed but the other way (as it was supposed to be). They are actually shorting Row 1 or Row 2 with the first Column, or at least they were supposed to do that since some pins on J113 are connected to some pins on J207 and J209 on the CPU side.

So that's it! The connection inside the CPU Board between J211-1 and J207-1 is not working, and it's gonna be a quick fix, I'm sure. I must thank especially the user HHaase which had already given me the clue to find this but as I already said I didn´t know J211-1 was supposed to be Column 1 too and hadn´t still checked it out.

Thanks every one who posted too, this forum and all of you are AWESOME!!! I'll be glad to answer any question in case you have any!

EDIT: Forgot to add that I've checked it's working by connecting a wire between those two pins and change lane started working at 100%!

Glad to see it's solved! That's a tricky circuit to work on sometimes, if the opto's aren't the problem. Lots of ways between A and B, and just one little glitch can throw it all out of whack.

I don't have any idea what you did, but congrats on the fix.

congrats! so it did come down to a board issue? interesting...i'll have alook into mine. congrats...now get your initials up there!! haha

Excellent, glad to hear a fix was found. Mine took a few days.

So this is a super old thread but just checking if any body can help me solve this exact same problem on my Maverick pin?