You're currently viewing posts by Pinsider dung.
Click here to go back to viewing the entire thread.

Instead of doing kits for specific games you might want to consider selling bulk sets similar to pbl.

GITD might look pretty sick on Crescendo.... the pops "when lit" feature seems to cycle almost at random..I have no idea what controls it, but when those five pops are NOT lit, it gets real dark except for the UV highlights. They all have warm white crystal fans in them so they are pretty dang bright when they're on... looks fantastic to have that basically be the "GI" and then the UV with the glowball and highlights when they're off...love it. GITD rings sound like they will be perfect for this.

Thinking about doing them on BF since I havent gotten a trade yet. Thing is, will it be available in all sizes?

Just an update on the new sizes and colors:
It's seems my customs agent has make a slight boo-boo. The paperwork had some errors and everything has been delayed. It shouldn't be too long before they are back on the way.
I apologize to anyone who is waiting on the new stuff. I'll let you know the moment it arrives.

Would the back-ordered translucent be part of this?

I have been told the shipping fiasco had been resolved and they should ship back out in the next couple of days. I have my fingers crossed for late next week
I'm terribly sorry for the delays. I hate this as much as anyone.

Glad to hear it. In the middle of cleaning inserts on my game, but after this weekend I will be waiting on rubber to get in.

How long before you ship your back ordered items? Still waiting on my translucents that were not available when I ordered my bulk pack.

I believe the bulk option is on the way.

Bulk Kit is not enough for some sizes to even shop one machine. Just an fyi and check beforehand or you will be stock ordering again.

If you enter a good kit for ST:TNG and Scared Stiff, I'll create a cart for you and send you an invoice

The Bulk kit was created for people who want a lot of a certain color, but not sure how many they need. The biggest hurdle for us in creating a bulk pack is keeping the price down.
We can certainly offer a mega-super-huge kit if people are ok with an appropriate price.
Any and all suggestions are welcome if we seem to have a gap in the offerings.

It was my fault for not checking. I am used to pinball life's bulk kit and even then last time I ordered one of their large kits and one of the small. That is just to get started. After that its just reordering when you run low on certain sizes.

If I were you I'd still increase the size of the bulk kit to include more rings under 1 inch. People will still have to order more when they shop a second machine, but it would get them through the first.

Any chance of getting the thicker post sleeves? Do not have the size off hand, but forgot I needed them to hold the captive ball in place on Pinball Magic.

The thinner ones are needed on Pinball Magic, The thicker normal ones, wont allow the playfield ball to hit the captive ball....
.......drove me crazy!

It had thicker ones when I went to tear it down. It is not a gimme shot, but it is not crazy difficult. Smaller posts fail to hold the ball in place so you lose energy that would otherwise transfer to the plastic ball behind it.

I got my free rings in yesterday. Put them in LOTR. They do feel less bouncy. I have Titans on my POTC right next to it. Feels like it is easier to trap LOTR now and harder to tap pass. They do make the flippers a tiny bit smaller so less likely to catch one off the tip if it is sdtm.

Want to leave them on for a bit. My only real concern is since they are thinner they would be more prone to breaking. Barring that I would probably order the thinner ones in future.

Had this fail tonight. Machine ha only been up and running 10 days now. :/ 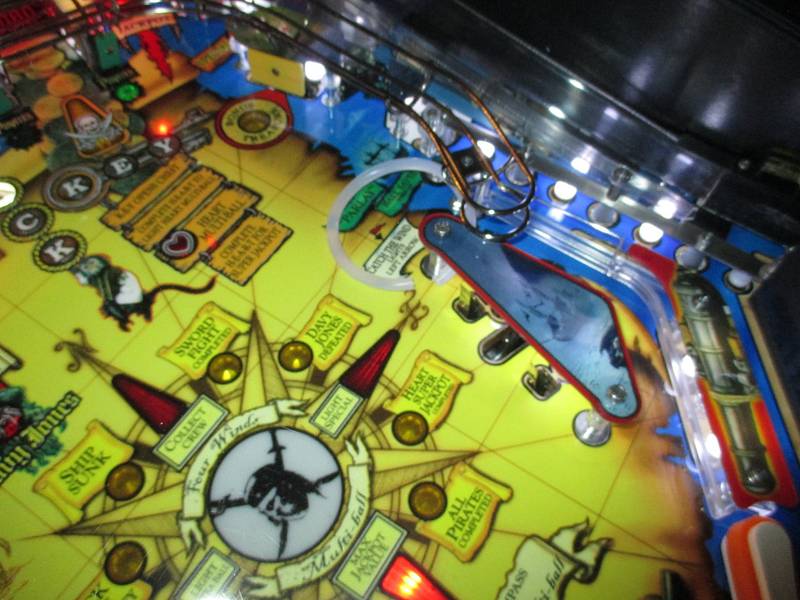 I hate to see this
Our translucent rings are getting better, and we'll continue to work on them until we get it right. They seem to run in batches. We have some on location that have been there for months with no problems, and others that have only lasted ~90 days. I know it's a complete inconvenience to have to change them, but I will be happy to replace any broken sling rings (and throw in some extras) for anyone that is having issues. Just PM me and let me know.
I really appreciate all the feedback! Positive or negative, it really helps us to try and improve our products.

To date I have two different orders of your translucent. A few months apart and I would guess different batches. The quality has been more consistent then when I order white rubber from pinball life. 1 break after shopping out 4 games seems pretty good. I have around 5 failures with comet's leds every time I led a machine.

Has anyone found the glow in the dark rubber to stretch less easily than others? I am in the process of putting it on my mystery castle and have found issues.

Any real amount of stretch and the color changes which is fine, but the rubbers seem less elastic than normal white rubber or even my titan clear. Getting rubber over plastic posts has me wondering if they are going to snap in time as I can see stretch and deformation in some of the rubber. Only way to tell will be time and I do like the color and small amount of glow I was getting. Fits the game very well.

Very good point. Also, If a ring stretches to the point that the majority of the ring turns white, it needs to go up a size. Some of the original rubber on some games was stretched so far... I wonder what they were thinking when they chose that size originally.

That stretching the rubber more resulted in a different bounce. As far as the gitd, its nice, but frankly I do not find them to be as stretchy as say your clear which exhibits none of the problems. In terms of turning white, putting a 3/8 Inch ID over a plastic post should not be having any of it turn white, but they do.

Think this will be my only game with the gitd. They glow very nicely, they charge very quickly, but I'm not going to play guessing games with sizing. I'd have to buy a stock of gitd and keep a stock of white rubber on hand to figure out how much stretch I need to compensate for? No thanks.

You're missing what he was saying. He didn't say buy a bunch and guess at sizes (although its so cheap that wouldn't really hurt much). He was saying some machines the factory recommendation is tighter than necessary, so go up **one** size. That's not guessing. You know what size the factory recommends and then know what size is one increment larger. That's just saying "I disagree with the factory on this post and will be fixing the problem myself" by going size+1.

I got what he said. I disagreed.

GITD doesn't stretch as much as other rubber. Using it results in a guessing game.

The designer made the game. Unless there is a bulletin saying to change it *fixing* the problem is you redesigning the game.Trust the guy who spent hundreds of hours playtesting the machine. If he wanted it to have a different sized rubber he would have made it that way.

You're currently viewing posts by Pinsider dung.
Click here to go back to viewing the entire thread.