You're currently viewing posts by Pinsider tranquilize.
Click here to go back to viewing the entire thread.

I *hate* China and the trillions of dollars of IC that they have stolen from the US and other countries. They commit every atrocity known to man and the rest of the world turns a blind eye. It’s disgusting.
*note - I hold no ill will towards the *people* of China. My sentiment is towards the Chinese government.

LOL, the middle class of the first world is carried on the backs of the Chinese. Wait till they start consuming all those cheap products on their own. They won't need to ship it out, and they won't need to buy junk bonds anymore. When you buy that dirt-cheap, high-labour product, you are the one stealing from the Chinese, via their government and your government.

Apple is moving production out of China and into SE Asia, little by little. They see where things are headed and want to not have manufacture concentrated in an increasingly hostile power as it continues to get worse due to Xi's paranoia and new nationalism.

Lol. Apple doesn't give a shit about the slavery and endless exploitation in China as long as you don't. They will move shop when conditions (mostly wages) creep up to non-suicidal levels.

The good news is that you can use the custom message on your new iPad to at least address a small part of the problem. 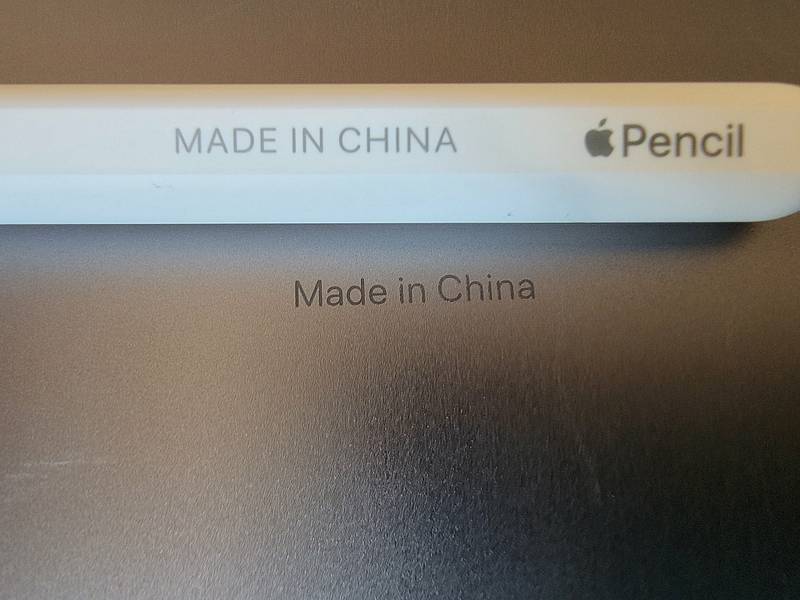 As is often the case, history provides an insight. Remember back in the 1960's when everything coming
from Japan was considered cheap junk? Now take a look at the mix of cars on the road in the USA.
China is a MUCH larger country with FAR more resources. Human and natural. They can dominate any
market they choose to.
Take a look at tools, Harbor Freight being one small example. Also electronic test equipment and
radios of all sorts.
Will some enterprising factory owner or investor who likes pins in China start offering competetive
products? Time will tell but IMO, don't be too dismissive of the possibility
Steve

But... But... Japan is still known for it's dominance in quality manufacturing. It's partly related to culture. The majority of Chinese workers are as close to literal slaves as you can get. Pride in quality simply cannot exist in that type of environment. Sure, there are better factories that have better QC, but they just throw more slaves at the problem.

Hahaha, this is so INCORRECT you couldn't be more wrong!
Wages have gone through the roof, workers rights are seriously protected, in some cases FAR better than in the west.
As a single example, maternity leave has just been increased from 8 months to one year FULLY PAID by the EMPLOYER, not the Government! On top of the year off, an employer cannot, sack, demote or reduce wages to a returning woman after her year off, fully paid with all benefits for a further TWO YEARS!
I have plenty of other real world examples that I have personally experienced (and in some cases paid for) just like the maternity one.
Please tell me ANY other country where workers "rights" are protected to this level?
Please stop talking crap about things you prove you have zero knowledge about and are relying on biased media reporting that is just so wrong. The media are the ones who should be locked up!

Why be a smartarse - commenting on something you obviously have zero knowledge of? If you don't know then how about just don't comment?
I know from first hand, personal experience exactly what goes on when you hire Chinese factory workers - do you? Pfttt....thought not.

There are still countless factories with suicide nets, factories with women living there most of the year etc etc. I just did a quick Google and the NYT, Forbes, NPR, etc, etc have current stories about abhorrent working conditions, state-run Union representation, and detainment of protestors. There are many documentaries that thoroughly cover the issues as well. Wages are up to what, almost three bucks in the best of cases? Who cares if you're working 6 or 7 twelves per week with no rights?

My gif should be enough. Trying to argue that manufacturing in China has any glamour to it is laughable.

You guys that think conditions in China aren't that bad are hilarious. All the problems are fake news, like everything else in the world...

Is it perfect? Definitely not. Does it have some isolated as well as systemic issues? Definitely yes. The US does as well. Have you ever been to China or talked to someone from China? Are the only sources you have looked at from western countries.
I'll admit my view of China was way off until I went there myself. There is certainly poverty there; albeit mostly rural whereas ours is mostly urban. A city like Shanghai is a world class city on par or surpassing the vast majority of the world. They have amazing Infrastructure. For instance most airports at least for.major cities make the us look like a 3rd world country .
I've been to China many times and married to a Chinese woman. My in laws in China were blue collar workers. are retired with pensions in their early 50s. That would be very rare to happen here.
Once again China has significant issues and is by no means perfect, but it gets old everything the topic comes up with Americans and it is abundantly obvious they are just parroting the western "common knowledge" which is by in large propaganda and half truths

China is like 5 giant countries, so even if I did go there, I wouldn't have a clear picture of the country and how it's economy works. The Chinese government is pretty much fascist. Yes, there are wealthy people there, but the manufacturing industry, specifically, is rife with systemic, extreme exploitation.

By your assessment, every single government report, media report and documentary that reveals and criticises this system is incorrect. I tend to trust those sources more than a dude who's been there.

I'm not saying trust me, but look at balanced sources at least. There is a LOT of ridiculous anti china propaganda out there. They are the main geopolitical rival of the western world, yet the western world is reliant on them economically. That makes for a tense situation, and a lot of propaganda on both sides..
It would be like someome thinking they have an accurate and balanced view of the US by watching nothing but Russian or Chinese sources. Would that be a fair view? Probably not.

I get what you mean and generally agree that there is a skewed view, but the government there is truly awful. I work with a woman who fled Hong Kong. She has some crazy stories, even from Hong Kong.

I did remind them that freedom in north america is just a term thats directly related to income.

Its funny, when I was developing LEDs in China, Taiwan, and Malaysia, my contacts had no idea what a Pinball Machine
was.
I sent pictures, which was replied with, "OK" but no working knowledge.
For China, it took my rep around 3 months to find a friend that would give her access to US Internet. (illegaly)
She finally saw some videos!!
All of a sudden, many of the projects we were working on made more sense.
Playing a game for points, with keeping a ball active, and responding to mechs, lights and sounds, could not surpass
how they saw Pachinko, the advanced crazy versions, or one ball type Bingo.
The view was more to shoot, watch, reward.
The time spent playing pinball was confusing too.
This was accompanied by not understanding why their was no immediate financial or product reward.
Their games, constituted more "gambling" aspects.

This is the sad state of current arcades. The one in my local mall is 100% redemption, essentially teaching kids to develop the addictive response to gambling. This will likely end badly, at least in Europe and likely Canada, and it will give pinball a bad name because you can technically win free games. This has already caused issues for pinball via local bylaws.

You're currently viewing posts by Pinsider tranquilize.
Click here to go back to viewing the entire thread.