I’d just like to share my new mod for GOT (well any spike game) this is an under cabinet led kit that will change colour with the button on the lockdown bar. So when multiple players use different houses in a game, the machine will glow a different colour to represent you.

A big thanks to Allibaster for helping me by double check my work before I plugged anything in. I was pretty hesitant doing this on my own with my limited knowledge in electrical design. Nothing is permanent, its easy to remove. it’s essentially a “Y” jack that comes out of the cabinet node board and connects from the lockdown bar’s button to an led amp that runs a rgb 12v strip. The 12v power comes from the bill acceptor header and has a fuse inline just in case.

If anyone is interested in doing this mod let me know. I’ll show you hows it’s done. I might also make a couple kits up if there’s enough interest.

I was wondering if any other Spike games make use of the lockdown bar’s button like Game of Thrones? This would work for any game that has the button change colour during game play.

Bump for the Sunday crowd.

Are there any other New Spike games that utilize the button with different colours like GoT does. I’m curious what other games this would be useful on.

Are there any critiques that people have? I’d like some feedback, good or bad.

Bump for the Sunday crowd.
Are there any other New Spike games that utilize the button with different colours like GoT does. I’m curious what other games this would be useful on.
Are there any critiques that people have? I’d like some feedback, good or bad.

Gotg on top of my head

I just checked the owners manual for GotG and there’s no reason that this wouldn’t work with that game as well.

Batman 66, Star Wars, and Aerosmith all have lock bar buttons too. Not sure on the lighting functionality on these, though.

I’d like to thank Allibaster again for his help with developing this idea. 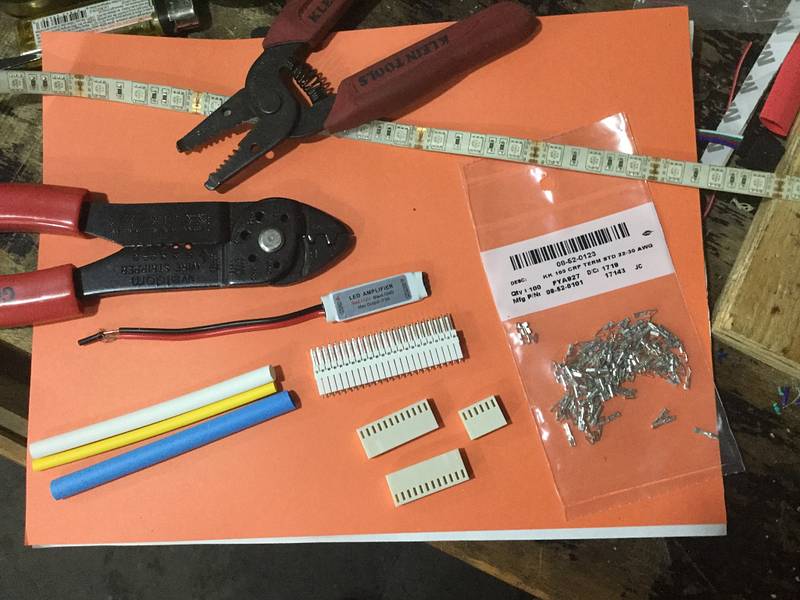 We’re going to make a “Y” jack for the cabinet node board’s connector C7 this controls the lockdown bar button and light. We’re also going to connect power to the dollar bill acceptor header C9 to get the 12v that we need. 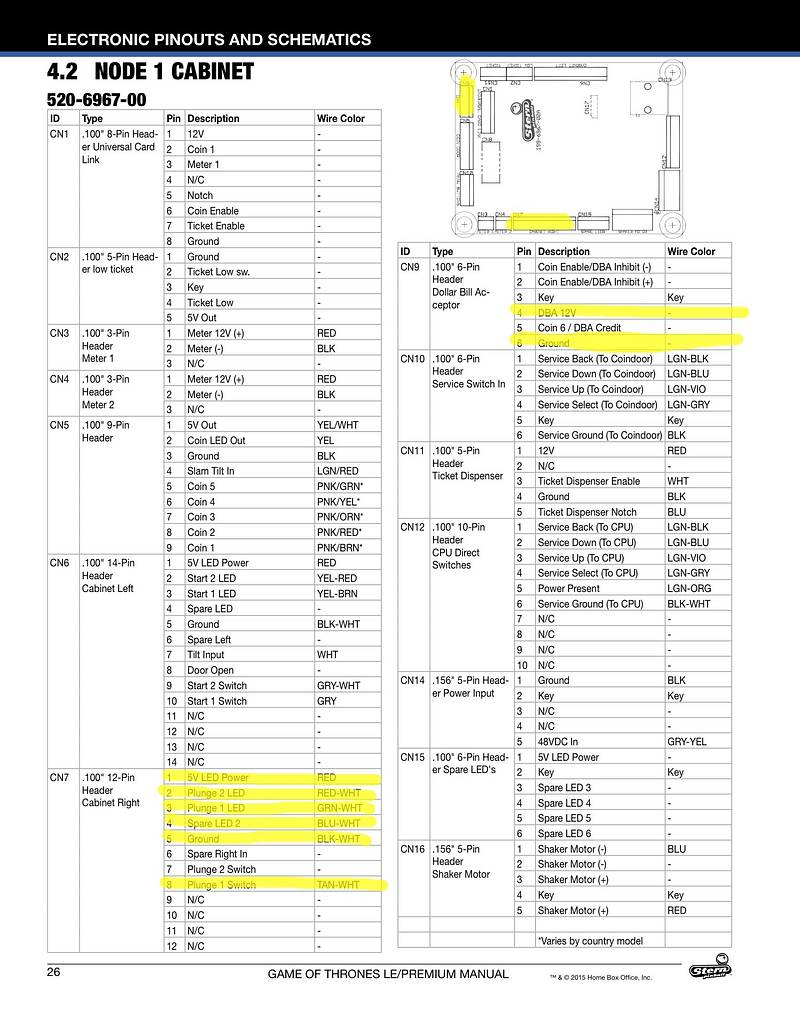 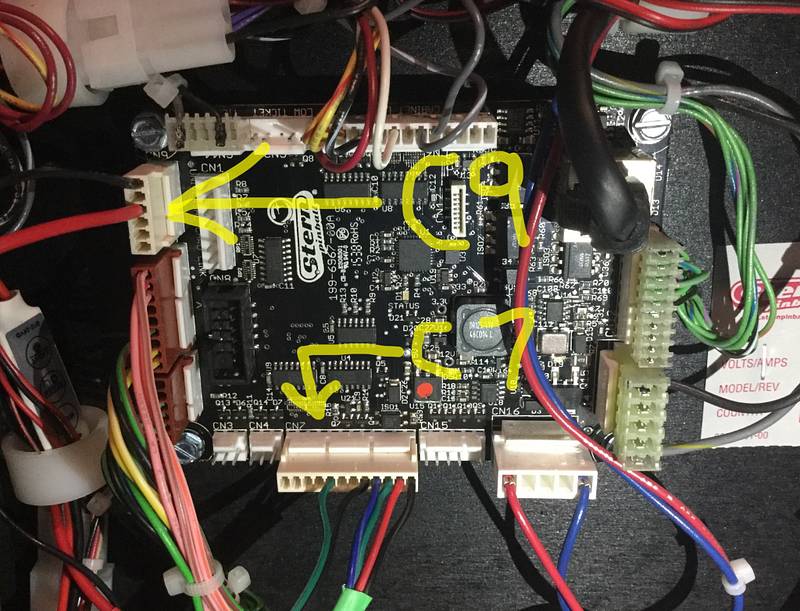 9C2D324C-C201-4C29-A34E-D1A780C82C94 (resized).jpeg
The original C7 connector in the game will plug into one side of our new “Y” jack through the “Z” connector. The other side of the “Y” jack will run into the RGB amplifier. Make sure to solder the wires at each connection and into each pin. Cover all of the connections in heat shrink.

Pay attention to the wire order in the C7 connector, because it is a different order then an RGB strip. On the 12pin connector pin#1 is the led +5v, pin#2-4 are RGB signal, and pins #5 + #8 are the button switch wires.

Connector C9 only needs 2 wires, pin# 4+6 for 12v and ground. This runs into the 1A fuse and then into the RGB amplifier.

I pulled the cover off of the RGB amp exposing the circuit board so that I could solder the wires directly onto the pads, rather then plugging things together. Make sure to cover everything again in heat shrink so that it doesn’t short out. 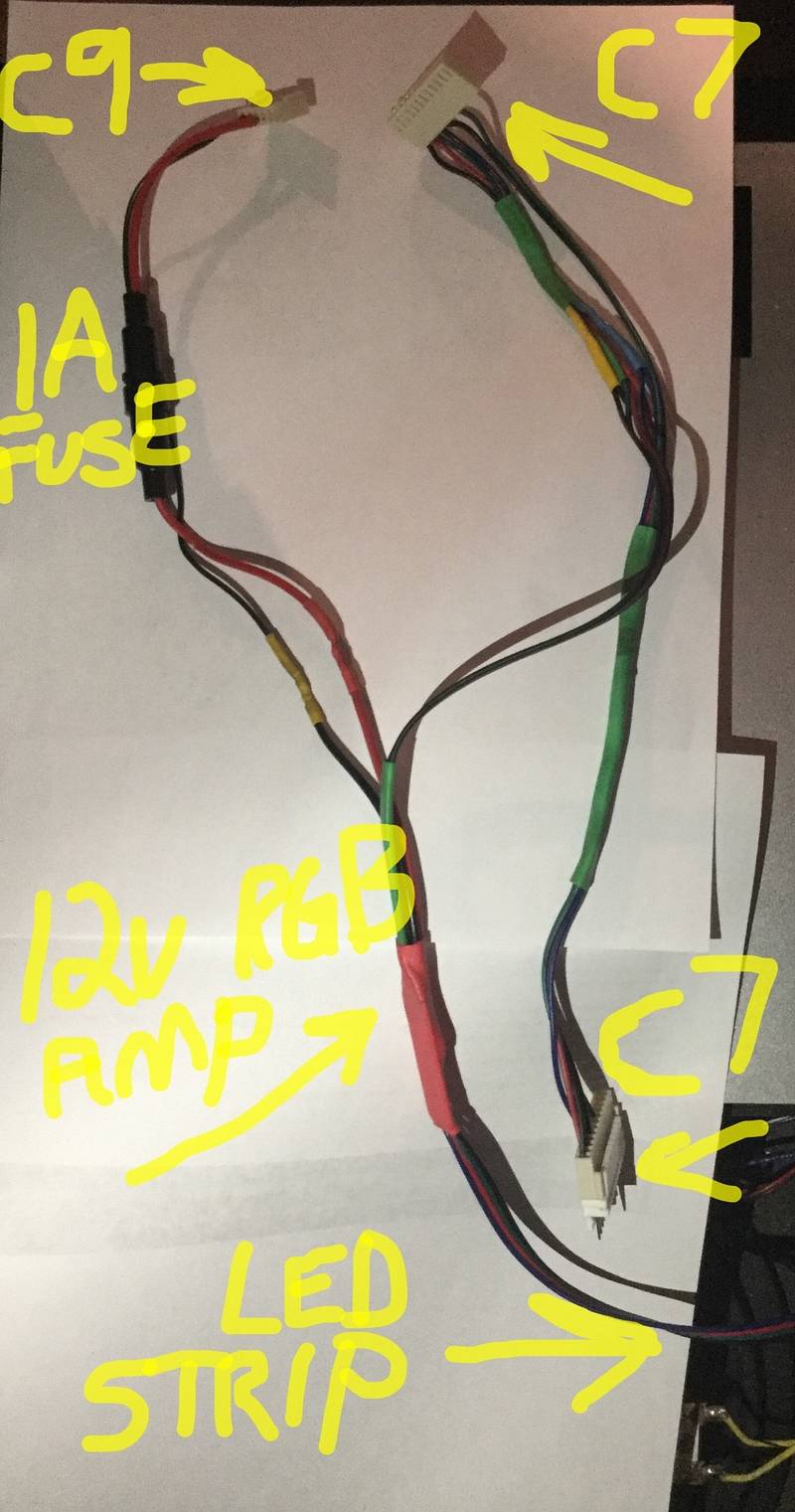 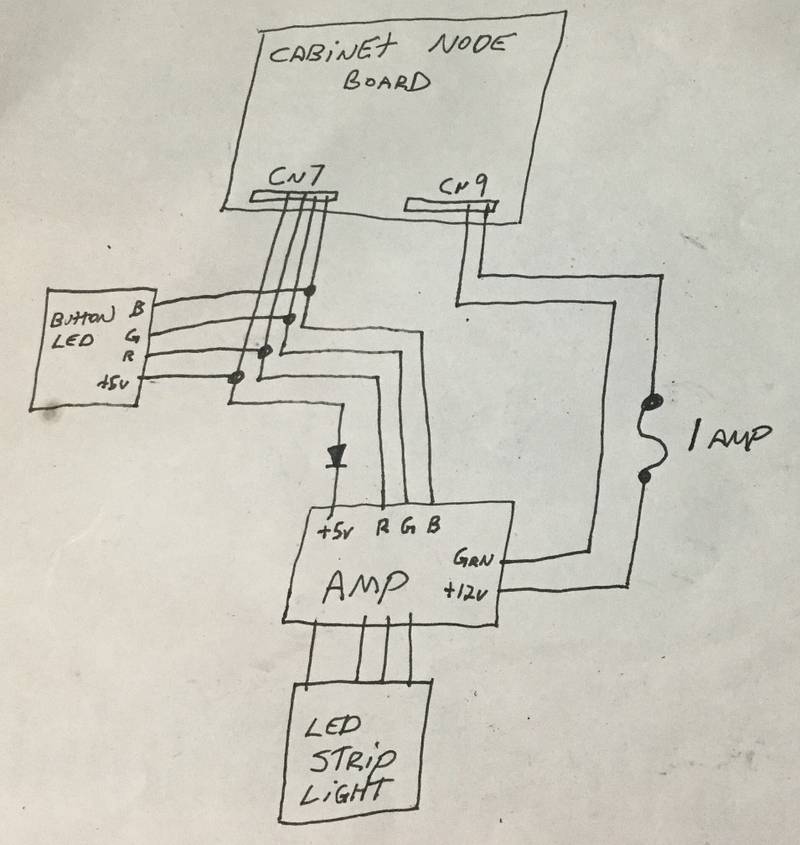 I ran the wire out from the RGB amplifier under the cabinet speaker, so that no drilling is required. To solder onto the light strip you will need to cut back the rubber weatherproofing on the seam that you cut it on. My 5050 LED light strip is divided into 3 sections that are separated by about 2’ of wire between each one. The first section is about 16” long and placed along the front of the cabinet about 6” back. The second section is about 20” and runs under the cabinet down the center toward the back. The third section runs up the center of the backbox and is about 20” long.

As long as you don’t exceed the power output of the dollar bill acceptor, then you could also add in RGB lights for the flipper buttons or speakers grills to match.

Pay attention to the wire order in the C7 connector, because it is a different order then an RGB strip. On the 12pin connector pin#1 is the led +5v, pin#2-4 are RGB signal, and pins #5 + #8 are the button switch wires.

Looks great! What would be really cool is if you could tie it into your lit flipper buttons so those matched too!

Looks great! What would be really cool is if you could tie it into your lit flipper buttons so those matched too!

I’m quite sure that this could be done, you could also connect it to your speaker lights to have an alll in one solution. The only drawback Is the 12V power supply of that node board. I haven’t seen anything posted by stern, but I looked into the power requirements for some dollar bill acceptors and it looks like they can draw up to 1.5A when a bill jams, but that for a short time, not continues use. Looking at continuous power consumption of a DBA you can easily run 4-5’ of 5050RGB light strips. I would not be to concerned to add flipper buttons and speaker lights to this setup. But to be safer with kits that have a lot of lights it might be wiser to get the 12V from the the backbox power distribution board. I’d assume that would be a better supply point.

The output of the led amp would just need to be split with wires going to each point.

Here’s the mod in action with the new game of Thrones code. Sorry for the blurry video, but you can get the idea of how it looks.

Here’s the mod in action with the new game of Thrones code. Sorry for the blurry video, but you can get the idea of how it looks.

I was wondering how the new code affected the lockdown button lighting and colors. From what I saw and remembered...it appears the new code took a bit away from it in this aspect. I've had the parts to wire a few of these connection harnesses together, but never did as I never bought the connection / extension cables to run up to the speaker lights.

GoT seemed to be the game that used the lockdown button color the most and now it seems it has slipped into the business as usual type use as many of the other SPIKE games with a lockdown button. Though, I guess at the very least it has more different colors to display at various times.

I still may use the connection harness on another SPIKE / SPIKE 2 game....I am thinking Star Wars, but I would probably have the lockdown button just affect the inner light kit in a "yo dawg" Speaker Light Kit in a Speaker Light Kit setup (as pictured). This would make it so the outer light kit would still light the entire grill a users desired color at all times, but the inner light kit would only light / flash when the lockdown button does and also light it's color. 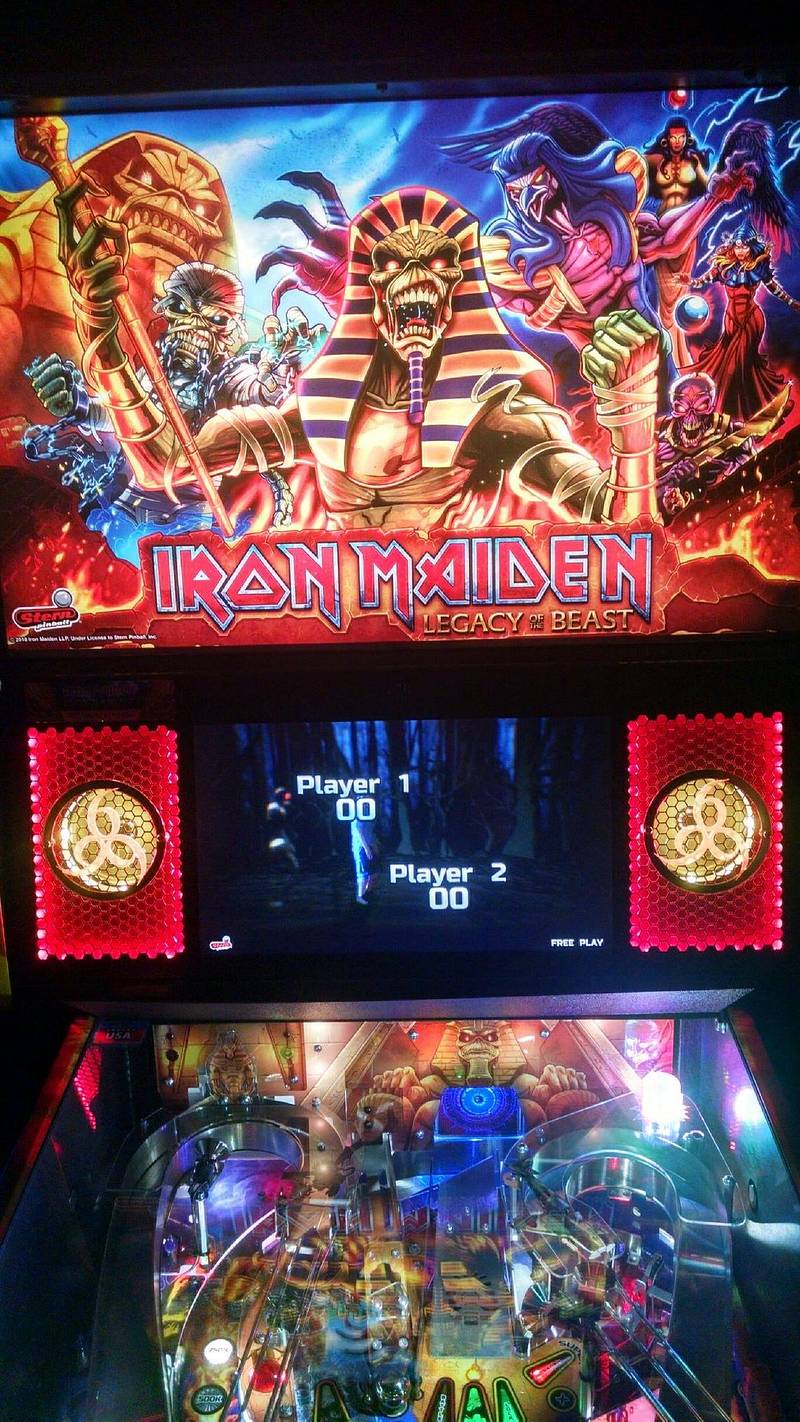 (resurrecting) Presumably, this approach would work with the new Stern Godzillas, yes?

I would think so. I don’t have that game, but as long as the cabinet node board is the same, then it should work for you.

Luckydogg420 I just wanted to thank you for the original post; it was very helpful, particularly the schematic you posted! I ended up doing a version of this on my Godzilla LE. I actually ended up making a few modifications, so I thought I'd post here for anyone else who might want to try this on their own Godzilla...

1) Those 0.100" Z-connectors? Couldn't find them anywhere anymore, and as a fallback I tried (ill-advised) to use T-tap connectors to tap directly into the wires off of CN7 and CN9, but that didn't work, likely due to the T-tap connectors being unable to cut well through the hard sheaths.

2) For the 12V DC to the amplifier, I bypassed the DBA acceptor altogether (with thx to

Lermods for a helpful reply in a now-drained, confusingly-titled post of mine, for which I apologize!) and attached a female barrel-connector to the amplifier, and basically used the 12V plug that the LED strip came with.

3) For the R/G/B/5V wires that I soldered to the amplifier input, I used alligator clips, and first clipped them directly to the respective R/G/B/5V pads on the action button LED, but because the current version of Godzilla code doesn't do a great deal with the lighting on that button, I attached it to the saucer pop bumper RGB LED connections instead, and it looks fantastic.

Thank you so much!

One last question, though... Because I used external power for the 12V, rather than hooking it into the pin's 12V lines, I DIDN'T add a 1A fuse between the plug and the amplifier (as was shown in the schematic) as I wasn't sure this would be needed. Would you disagree?

This is fantastic, I’m glad that someone else found this idea useful. I don’t think that you would need a fuse since you’ve got an external power source for the 12v.