You're currently viewing posts by Pinsider gstellenberg.
Click here to go back to viewing the entire thread.

I’m really enjoying SA and looking forward to tomorrow’s stream. I somehow lost my saved progress, so starting over obtaining the spells.

Looks like we introduced a bug when adding a new P3 framework feature that only SA uses so far. It affects restoring a saved state and then saving it again (regardless of whether it's the saved to the same name or a different one). We'll get an update out after addressing a couple more issues.

But once you have them, the modes are really cool! I’m sure I’m just scratching the surface. Expecting to learn more of the rules from Kevin and Gerry tomorrow night.

I'll be chatting with Kevin on stream, so bring your questions!

Great job with the stream, Kevin, and thanks to everybody for tuning in. There were some great questions in chat.

All but one or two of the 16 main spell modes defaults to either 45s or 60s, usually for 3 or 4 shots. The hardest one (IMO) is the learn ice spell, which gives you 15s to hit *each* shot. I think that's the one you're referring to? Hit one and the timer resets. So it's still 45s for 3 shots, but the short per-shot timer is pretty intense.

Tip: Stack Black Magic Multiball onto a mode, and the timers go away (the mode continues until you complete it or until MB ends). That's a huge advantage for the Learn Ice mode.

There are a bunch of operator settings for mode timers and other things. If the defaults are too difficult or not fun, change them. Set the options however you want so that the game's fun for you.

The game is tough for sure! After viewing last night and hearing Gerry talk about the ending, I'm pretty sure I'll never beat the Sorcerer.

There are settings for sorcerer battle too. Well, there were. Looks like we hid those when releasing, but Greg and I just talked, and we'll unhide them in the next release. That'll let you adjust the things like the time length between sorcerer attacks and the damage each of you inflict on the other. Then you can make the sorcerer battle easier, and you can always make it harder again after beating him a couple of times.

We're working on a couple of issues reported by customers. So we'll likely have a new release pretty soon. Among a few other subtle things, we're adding a ball save for the right ramp releases and fixing a bug related to failed launches. Oh, and a save state bug. Currently if you save, restore, and save again, it'll corrupt your save point. That's already fixed here and will be in the next release.

It would be cool if there were two varieties of Fire, Ice, and Lightning to mix things up.

No kidding. He made it look like he didn't even have to think about it! That's some impressive muscle memory.

Thank you! Thanks for your comments on stream about the good price/value of the game.

Toyguy offered an initial recommendation for a new insult, and we'd like to run with the idea that all of you can participate in the brainstorming.

So... let's hear all of your favorite callout ideas for SA. We'd like to add some theme-relevant insults and also some additional variations of any others you think need more variations. This should be fun!

Please list your callouts here. Just list the quote and where you think it should be used:
eg (from

Toyguy): "You have the accuracy of a blind goat herder" : After not hitting anything for a while.

Just please take it seriously... don't suggest silly things you don't think would fit, and please refrain from using profanity. Do suggest things that will enhance your immersion while playing.

We'll take inputs for about a week. Then we'll filter the list and have Ryan record them.

We've got a great list of quotes to consider. Please keep them coming for a few more days.

No new quotes will be in the next maintenance release, but we'll get them in in the following release.

I absolutely love some of the suggestions!

We're taking quote suggestions through the weekend. So get your remaining ideas in soon!

We'll review on Monday, decide on a final list, and then get them recorded.

Be sure to update both the app and module driver!

Note - this update does not have any new callouts. Those will come later. 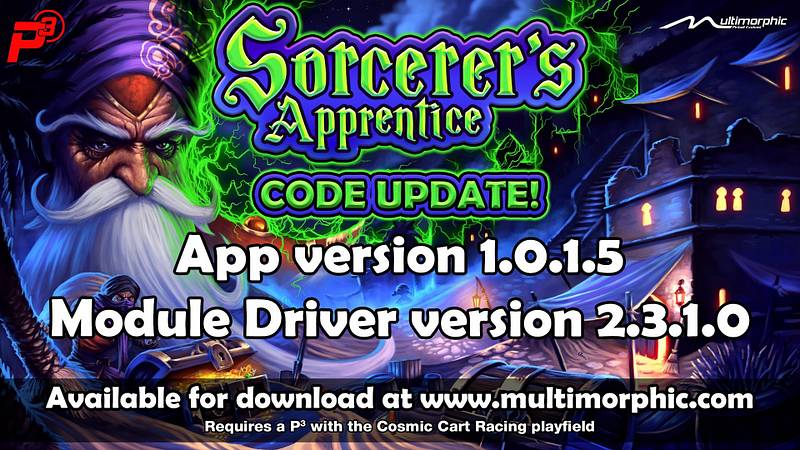 We'll have Sorcerer's Apprentice and Heist (and we'll swap to others) at Expo next week. Hope to see you there!

We gotta get to work on that telescopically retracting glass...

I had removed the balls from my P3... months ago ... and promptly forgot.

We designed the CCR playfield to be high speed and flowy for the racing concept. It definitely punishes you when the ball gets out of control.

Make sure to turn on Sorcerer Apprentice's "insult callouts" in Settings/Audio. It sounds like you'll get to hear a lot of them.

The next software update will have over 50 more callouts, many of which were requested here.

My most frustrating problem is that the scoop on the CCR module is firing right down the middle.

So; gstellenberg ... we need an update to the diag program to put the level meter on screen.

Agreed - we do need to add it into Diags. As Rob said, it's currently in the apron area in System Manager (and LL-EE).

Please let me know if it turns out to be a misaligned scoop. There's an explicit step in the assembly instructions to align the scoop, install the partially built playfield into the launch fixture, and test launch a bunch of times for no STDM launches before continuing assembly. I know for sure that step wasn't skipped on your p/f. So either your machine isn't level (easy fix) or the scoop angle relaxed after assembly, possibly when traveling sideways (screws perhaps not tightened enough).

Here's the CCR section in our support wiki (login required): https://www.multimorphic.com/support/projects/customer-support/wiki/Cosmic_Cart_Racing
Among other things, it has the article Rob mentioned about realigning the scoop.

You're currently viewing posts by Pinsider gstellenberg.
Click here to go back to viewing the entire thread.