#Heat Wave
The motor in the bottom cabinet runs, but the score wheels don't reset. Seller said it was working ten minutes before I got there, but quit when he moved it from one part of his house to the other, to where I could see it. So, I'm looking for a loose connection or something easy... after I check the fuses, where should I start looking for loose wires / bad connections?

Don't see an on switch, besides the inline switch on the power cord. These don't have on switches?

No manual or schematics yet... will be ordering one off eBay. 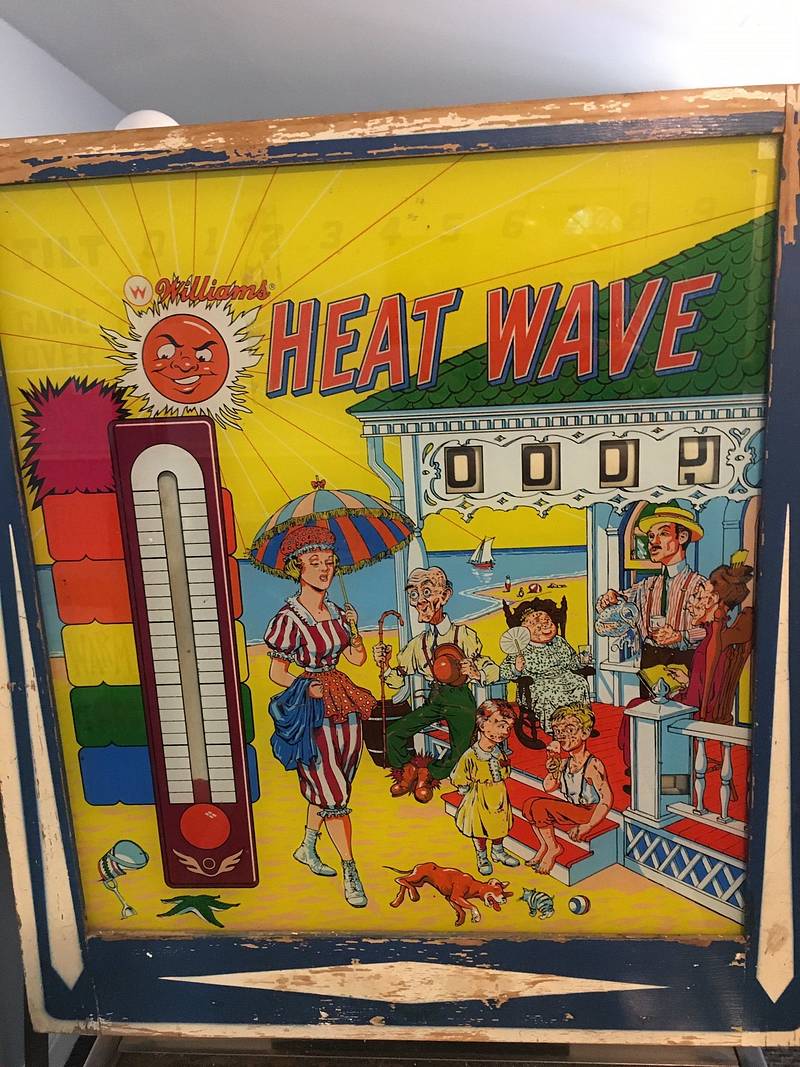 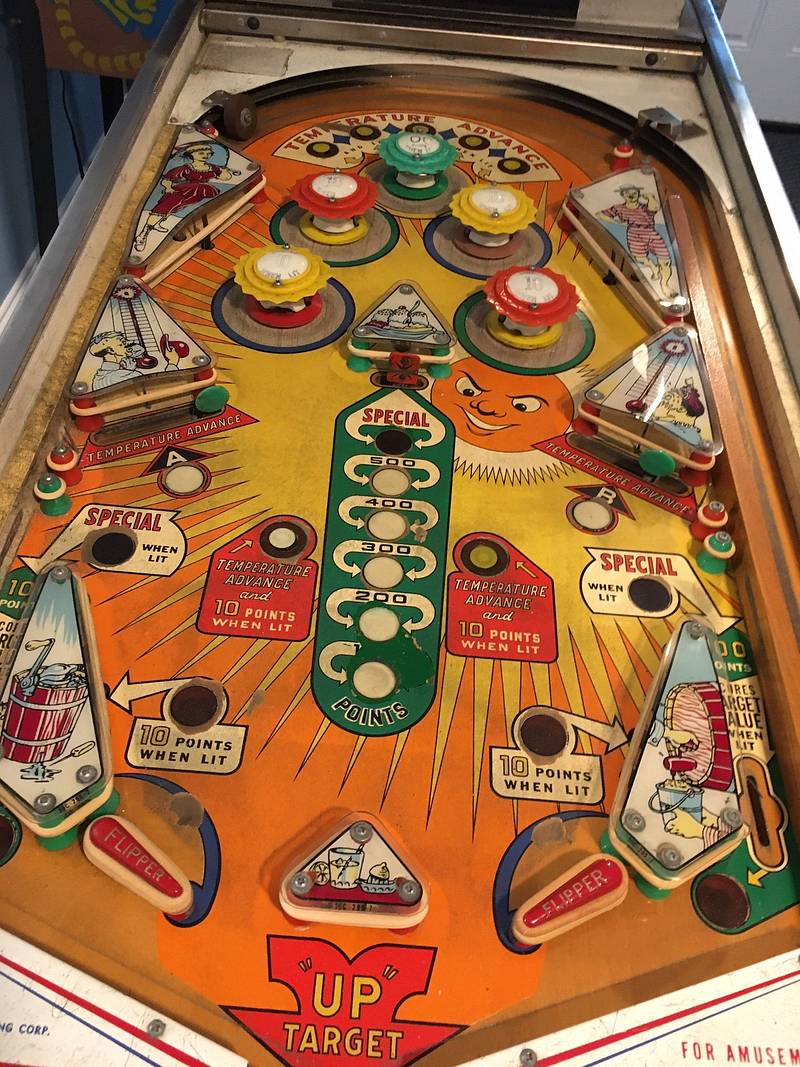 This transformer looks terrible (not that I would know...). But parts of the machine work, so I guess its working. How can it be in this bad shape and still work? 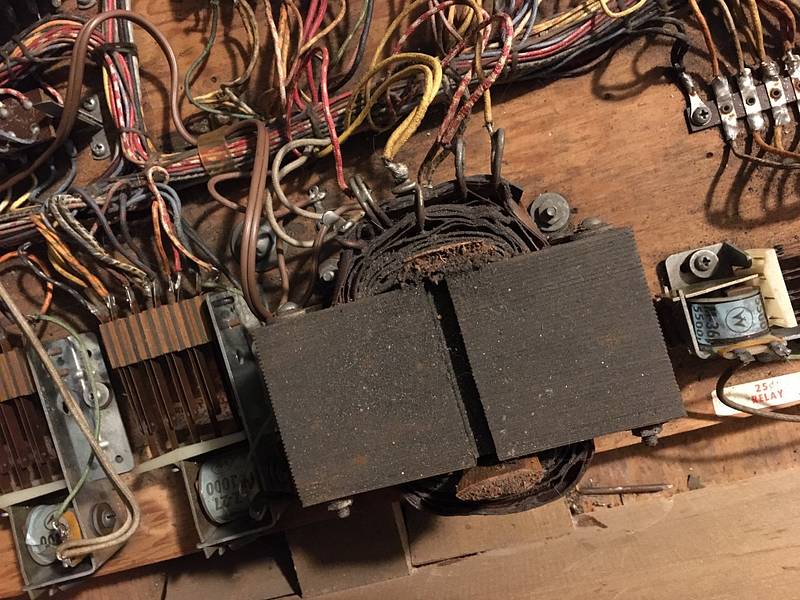 This stepper is very sluggish. So far, it isn't firing up, but hopefully it will when I find the culprit in my first questions above. Is it missing some parts? 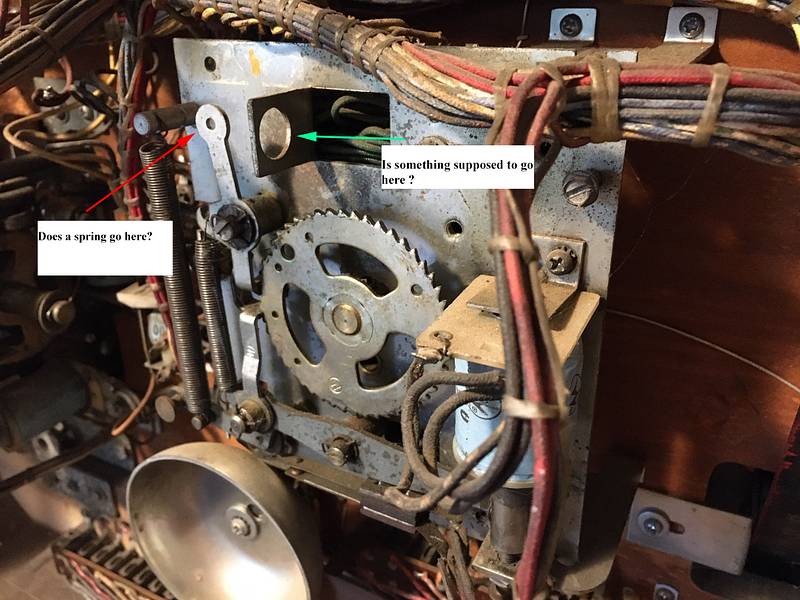 Two size lamps? The larger ones look like the usual 44s or 47s. The smaller ones are little globes. Why are there two different sizes of lamps? 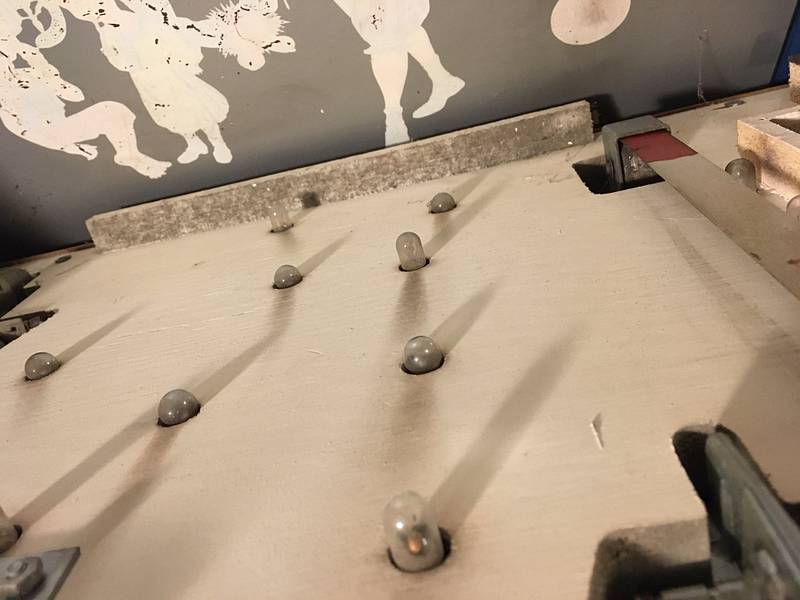 Where is the serial number on this era Williams? Is there one?

One thing at a time -

When you see one coil on a stepper that is match unit. It uses the same frame as a two coil unit. Looks fine.

The lamp panel may #455 flashers, I have them in my Heat Wave.

There was no on/off switch for this era of Williams machines. To turn on the power, plug in the power cord and press the flipper buttons or close the coin chute switch (dropping a coin in the coin slot) and the machine will turn on. To turn off the machine, slap the bottom of the cabinet or unplug the power cord. You can always install a traditional on/off switch at the bottom of the cabinet if needed.

Most likely there are dirty relay switches that are prevented the score reels from resetting. First check if all the Jones plugs are clean and seated tightly to their connectors. The Jones plugs are at the ends of the wiring harness that connect the backbox and playfield to the main cabinet.

For your photo of the stepper, it looks like it's a continuous stepper, so it only needs one step up solenoid - so no missing parts.

Here is the section on score reels, noted by

This stepper is very sluggish. So far, it isn't firing up, but hopefully it will when I find the culprit in my first questions above. Is it missing some parts?
[quoted image]

Like most step units it probably has a combination of old grease and weak springs.

The only cure is to disassemble it and clean it up

Thank you all. I’ll clean up the Jones plugs and report back.

Also note that the jones plugs in the head can be switched (ask how I know). Verify wire colours match. I have the schematic I’ll find it tonight.

Don't know what I did, but now it sort of works! (have not cleaned the Jones plugs yet. Just paying the machine a quick visit tonight.)

The flippers work.
The pop bumpers and slingshots work.
This game has two moving targets. They both work.
One of the 10 pts when lit blinks / dims along with the left flipper
The playfield lights work, or most of them do.

When you turn it on, with all five balls in the ball chute, the cabinet motor runs and something in the cabinet near the head buzzes about every half a second. Happens after the game when all 5 balls are back in the chute.

During a game, the cabinet motor never turns off.

The tens digit has trouble going from 8 to 9.

The only back glass light that lights during the game is Frigid. That shouldn't be on until later in the game.

Unfortunately, the serial number is gone. Must have faded over time.

the thousands has no lugs underneath. Maybe because there is no 10,000 reel to pass to?

Funny thing... I reset the credit reel to zero and turned it on. It racked up 12 credits. Is that a glitch or a feature? [[edit the next day: found a pin that keeps the machine racking up credits until 12.]]

That's the Saturday Night Report. Back to regular life, already in progress.

Cleaned the Jones plugs in the head, and now the Game Over and Match Number light.

The scores reset, except the hundreds reel sticks between 8 & 9. Pulled out the reel, the plastic ratchet teeth don't look worn. It just feels very "gunky" clicking between 8 & 9. Its almost as if the shaft isn't wanting to pull back far enough to click down into place, although that doesn't make sense considering it works fine on the other numbers.

I've looked at the link above and this one
http://homepinballrepair.com/index.php/em-score-reels-williams/

Neither of them address the issue of a reel being sluggish between just two numbers. Any suggestions besides diving into taking the reel assembly apart?

It was better. Now its worse.

Pulled the reels. Cleaned the contacts. Dusted the numbers. That's when I found the missing wire that goes to the tens digit. Soldered them back. Now the score reels don't even try to reset. Found a wire hanging by a strand on the ones digit. Soldering it back on didn't help. (Disconnecting the newly soldered wires didn't help, either. Thought maybe they don't belong on the lug, after all.)

Lost the Game Over light and the Match light. Playfield lights are on, the moving targets move. No other targets are activated. Flippers don't work. It must not think the game is over in some respects, because the buzzing sound that would happen every half second or so when the game was over isn't happening.

The game starts when hitting the start button. Woo Hoo!

Tripping the coin switch racks up five games. Starting a game resets all the credits to zero. Once it reset to 2. Sticky, I guess.
Max credits 12.

The Game Over light lights when the game is over, but Match does not. Match was lighting the other day...

The thermometer does not reset. Found a thread here for addressing that.

Anyone know why the game is designed to be able to reset the credits to zero? When would that be used? And how do I keep it from happening when I press the start button?

Power to the match lamps is controlled by the game over relay. If power is reaching the game over lamp, it should be getting to the match lamps since that game over switch controls power to both. There should be a number match on/off plug in the backbox - is the plug tightly seated to the jack? Also, check the number match stepper unit to make sure it rotates smoothly and that the switch contacts are clean. Other issues could be burned out lamps and faulty lamp socket.

The consensuses of the forum over the years is that these 60s era EM machines look best with white rubber rings and the original incandescent "white" lighting - #44 or #47 lamps, and very limited color lighting. Although, they now make LED lamps that simulate incandescent "white" lamps. All personal preference, though.

Only one credit should be subtracted from the credit unit when the credit button is pressed. Check the operation of the credit unit. Manually push in the credit unit reset solenoid plunger. Credit wheel/stepper should click down to the next position and subtract one credit. It's common for a credit unit to get gummed up from old grease. Thus, the credit unit would need to be disassembled and cleaned. Reassembly would only require very limited amounts of grease/lubrication.

Check the operation of the credit unit.

Thanks. I guess this is the part where I learn to take apart the credit reel and the four score reels. It's a hobby....