My 1st Bingo! A Bally Double Up.

Hey folks, I figured I'd post a few pics of my 1st bingo game. I am sure I overpaid for it so it's probably a keeper for a long while! LOL! I'm slowly tinkering on it and getting it cleaner and working more and more. Eventually, it'll play 100%. I've still got some tinkering before that happens though. I bought a tumbler and cleaned up all the playfield parts. I cleaned a few layers of tar and nicotine off the whole game.

Right now, it doesn't know when a game has ended and it doesn't recognize a win. I think the switches in the ball trough are dirty?

This is the heaviest game I have ever moved! 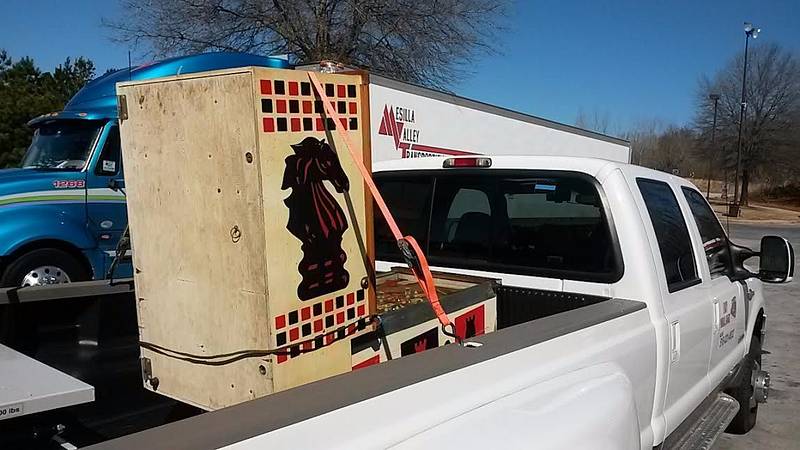 I think the game is missing a bracket where you see the 2 screw holes. The switch to the left of the screw holes is not activated by the cog because there's no bracket to open and close it. Anyone have this bracket for sale maybe? 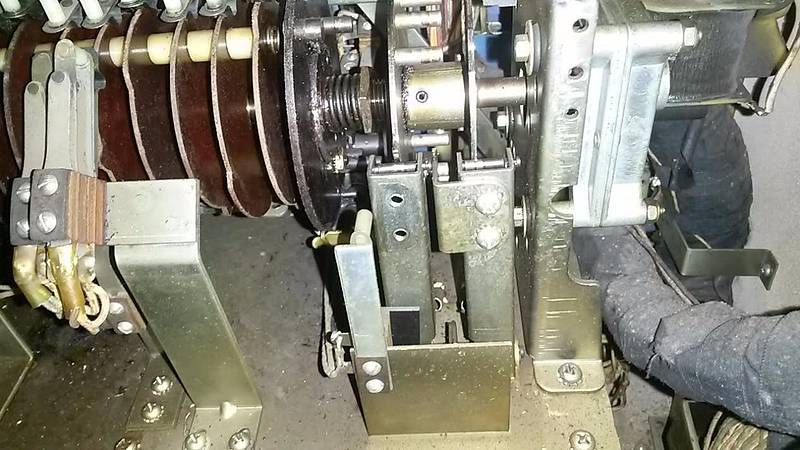 Anyone for a tasty plate of shiny, clean parts?! 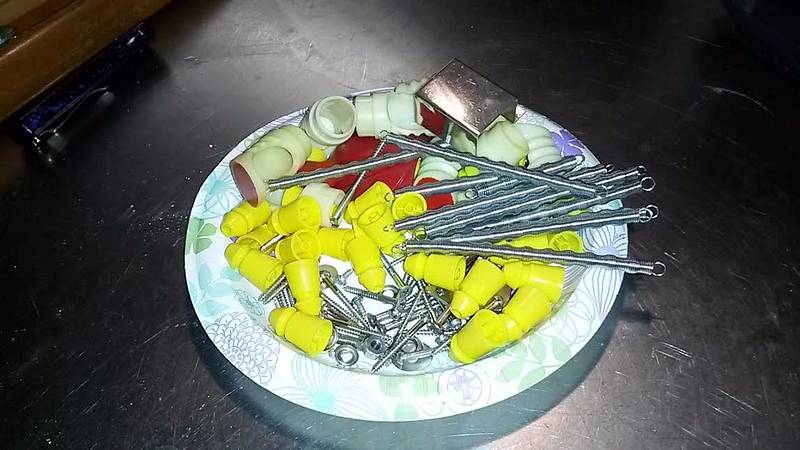 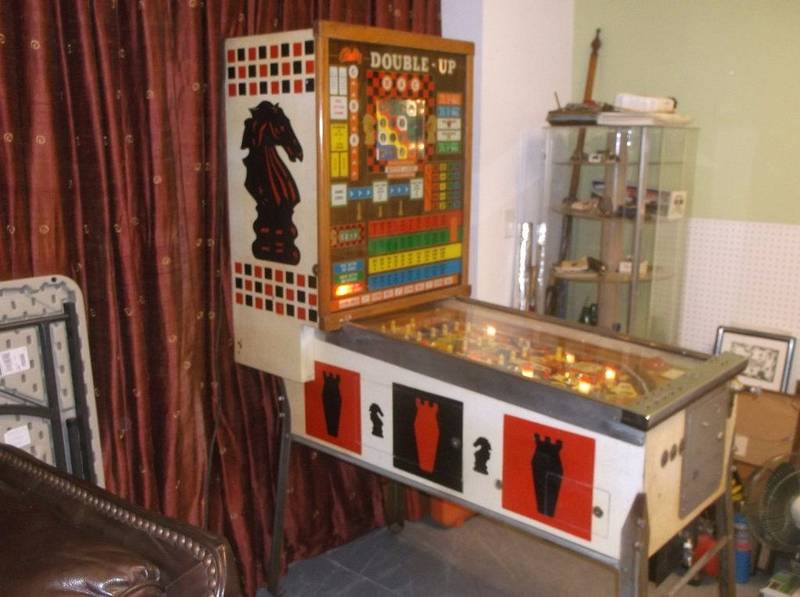 Nice! Did you seriously move that machine in one piece?! You are a better man than I!

Check with Joe Shope ([email protected]) for your part needs. He's got all sorts of stuff. I think what you're looking for there are drag arm stops but I'm not certain.

I am sure I overpaid for it so it's probably a keeper for a long while! LOL

Looks great, as for price:- The value of any 2nd hand items is exactly "The agreed price by the buyer and seller at the time of the transaction", so you can't of paid to much!!!

Bingo machines are soooooooo heavy. I really underestimated my one at the time. We learn hopefully though.

I removed the legs and metal side tubes so my lift table could be used to lift it onto my truck bed.

Hey d0n, we corresponded a bit via email - to echo what Toyguy said, Joe Shope has quite a few parts for bingos. Congrats on the pickup!

Double-Up is the second heaviest game that Bally produced! Only Hawaii was more heavy. On my show's FB page, someone noted that the flyer for Hawaii lists the weight at 443 pounds!

When Bally moved to the 20 hole games, they really ran out of space in the head for all the units required. On Double-Up, the player can actually change the scoring of any color to double or double-double if the machine had randomly awarded double in that color previously.

Double-Up is a fun game - it was my first bingo, and led to many, many more (I'd still like a few more)!

For timing issues, you need to suspect the trough switches, as you say - on this game, the position of the timer unit, the trough switches (some are double-ganged), and the trip relays (before 4th, before 5th, after 5th) all affect end-of-game logic. Many earlier bingos only had a portion of that circuitry.

Holy Smokes - you moved that game with the head on - WOW - I'm impressed. That's a whopper.

Congratulations and have fun with it.

bingopodcast that was you? THANKS MAN. Your advice has gotten me closer and closer to getting this game working 100%. That's one of the main reasons I enjoy this hobby... the people are so helpful and genuine. I would not have known where to begin if you hadn't contacted me. I'll buy you a beer one day

I would have guessed this game to be around 400 lbs when we started to move it. It's heavy! My 500 lb northern tool hydraulic lift got it up and into my truck with ease.

I have the perfect pinball house because I can back up to the double wide front door, there's no steps and all the flooring is tile for easy rolling.

An interesting thing on this game is when you open the coindoor a #47 bulb switches on to light up the coin area... kind of like a refrigerator door light or a cars dome light. They really made things well back in the day.

Do most bingos have this switched coindoor light? I've never seen anything like it in my 49 years.

I did get all the keys with it, the coinbox, the manuals and schematics BUT the bar tenders coin box is missing. I'd like to find one to make the game complete.

Having only one, I can't say most Bingos but my Roller Derby has the coinbox light.

Yes, most of the bingos had a service light that would turn on when the door was opened.

It is not often that you'll find one with the switches intact, and a working bulb. Most of the time, the switches are mangled by a collection person hitting them with the coin box.

It took me a while to find one for mine. I'd be happy to give you dimensions if you'd like to have a metalworker fabricate one or if you have skill with welding.

Also: no problem at all. I love seeing new folks get a bingo. Warms the heart! Beer helps too!

To your control unit pic above, I do see the missing bracket now. You need a drag arm stop. Part # P-2438-1A - might help if you email Joe.

Bally really thought about the technician, collector, bar owner, and player. They really made the experience very nice for all.

Nick my service switch is intact and it actually works as intended. I was surprised when the door opened and the light came on. LOL! Thanks for your offer though. Joe is selling me the stop arm I need. yes!

I would appreciate the dimensions of the box when u get a chance. No rush. i will also ask Joe if he has one for sale.

Cool - check with him first, and I'll post the measurements here in a few days.

Here's a few pics of the game all shopped out and clean. I may have to hire someone to get it working though. I'm stumped. 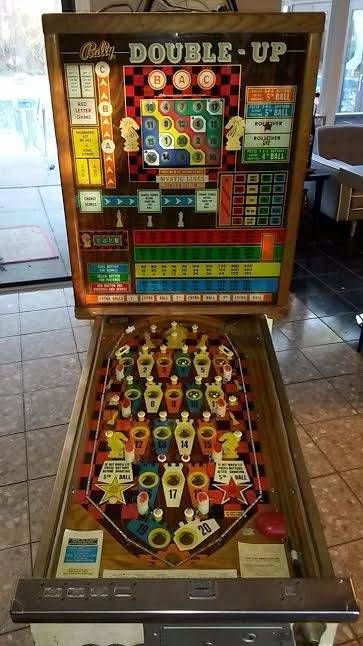 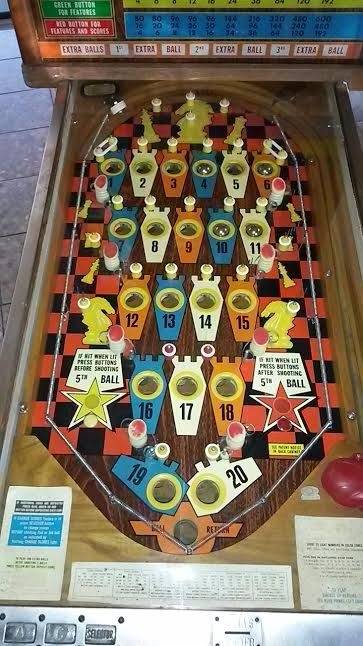 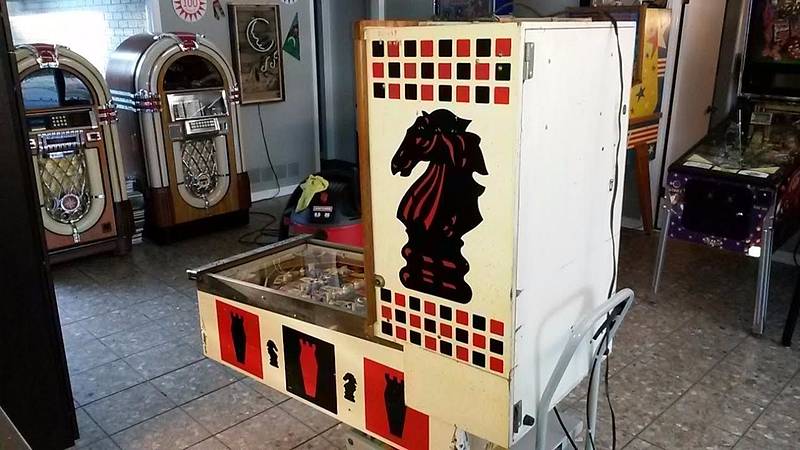 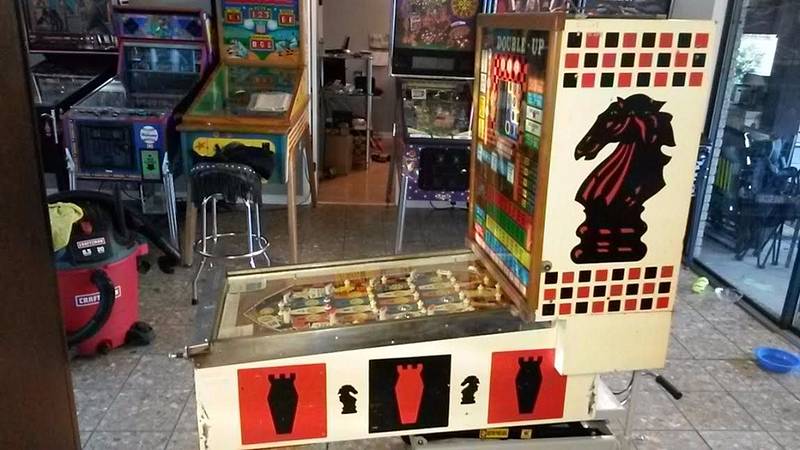 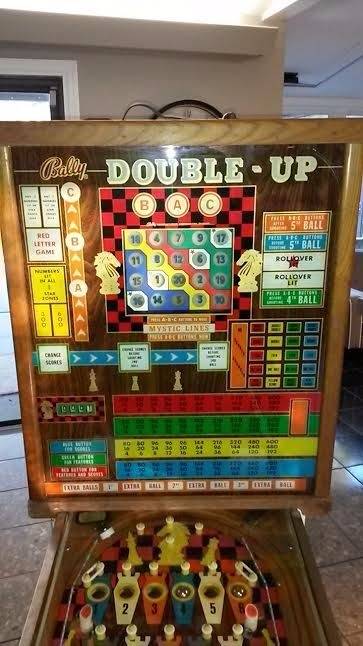 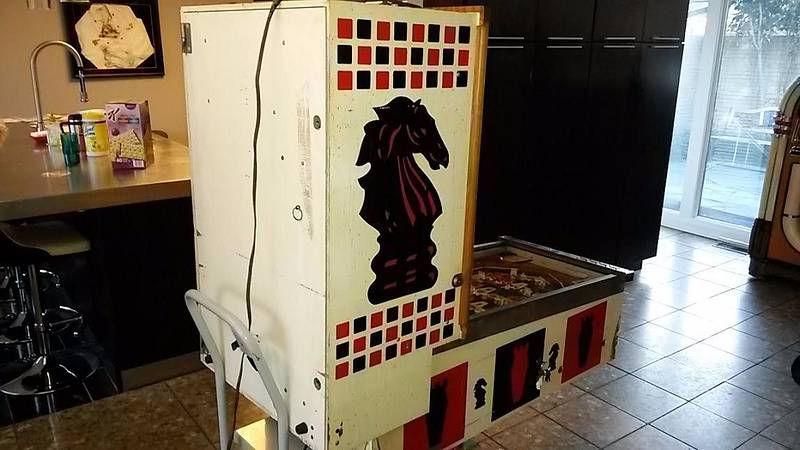 Looks really nice all cleaned up.

I took the trough switches out today and made sure they were all clean. The contacts appear to be touching and not touching at the appropriate times. I sanded them all so they're shiny metal now.

I guess the first thing that needs attention is the game won't coin up. (EDIT- you can't press the extra ball button and expect a game to start! Always start a game with the red button) I can manipulate the coin switch but it doesn't do anything... although it did work in the past few days. The only way I can get the game to do ANYTHING is by pressing 2 switches on the cam gizmo through the side door. the game will then start clicking and clacking continuously. If I get lucky it will start a game and a ball will come out. That's maybe 50% of the time. If I get even luckier, the balls actually register and corresponding lights lite up in the backglass when the balls drop in the numbered holes on the playfield. That's maybe 10% of the time. NEVER has the game ended correctly after 5 balls OR has it ever registered a win... when I've manually dropped the balls in the win holes.

There's a lot going on with this game. I hate to admit defeat but sometimes it's better to let a pro take over.

Hey d0n, it sounds like you've zoned in on the issue already! The kumbackey needs specific pressure from the lock cam on the side in order to allow the motors to spin. If you lift your playfield and unscrew and remove the ball return board, you'll see the kumbackey relay on the left side of the cabinet.

Examine each of the switches and ensure that they change state when the key would be turned. You can simulate this without the key by simply unscrewing the lock cam and observing the switches.

If you check your manual (http://bingo.cdyn.com/machines/bally/double_up/resources/manual-double_up.pdf), you'll see the following:

Check the other switches for the Kumbackey while you are in there. I usually use a pocket mirror or similar to help see them since they are at a funny angle.

Some patience will be required with this - you've done an excellent job with the cosmetics, but if the game had sat for a time, you may fix one problem and then another is exposed several times before it starts playing correctly. It can be overwhelming at first, but you'll definitely get it!

Once you verify the Kumbackey, the coin switch should function. If it does not, just let us know here and I will direct you to the next most likely suspect.

ok thanks! I can do cosmetics pretty well but diagnosing a bingo game is something else entirely! LOL thanks for your help

I will look into it soon. I did mess with that kumback key. Its the round chrome key correct? The plastic slotted piece had all but fallen off the switches. I'm pretty sure I got it back on correctly but now that you've told me what to look for, I'll be sure this time. Thanks for the link to the manual.

Oh absolutely! The schematics are also on that site (bingo.cdyn.com).

There is only one normally closed switch on that kumbackey. Review carefully using the manual (I think it was page 49).

I have the perfect vintage sign to hang on the wall above 2 or 3 bingo games. 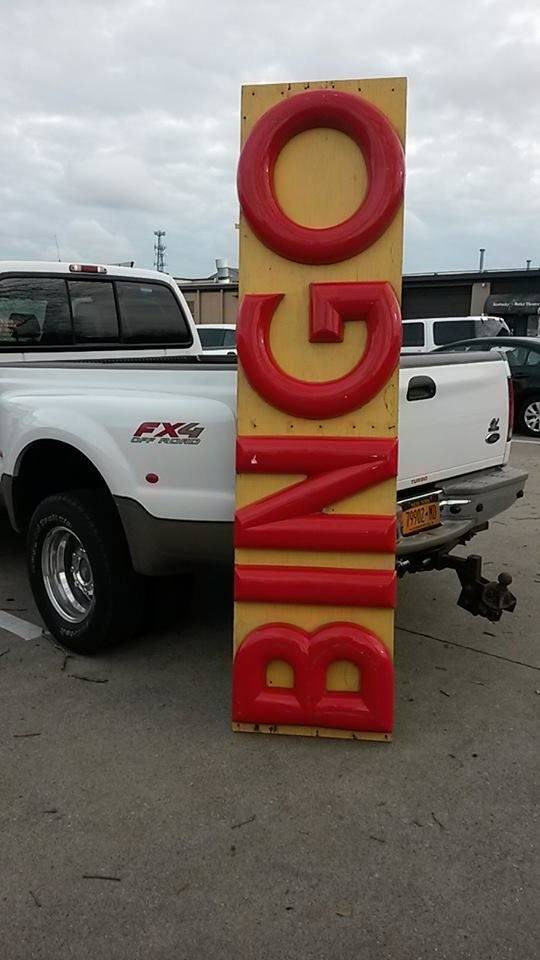 The man, the myth and the legend made a service call today to work on my double up. Hugh knows every single part in my bingo game and how it's supposed to work and more importantly, why it doesn't work & how to fix it.

Come to find out, I was pressing the extra balls button trying to start a game. DOH! That's not gonna work. LOL.

After he showed me how to play the game and which buttons do what, he dug into all the repair needs. There was lubing of the clutches, fixing & cleaning many gizmos, switches and thingies. Eventually, the game started to come to life.

He got it to a point that I can play it pretty reliably but it still needs some love. I'm going to drop it off at his shop in 3 or 4 weeks and have him make it 100%. 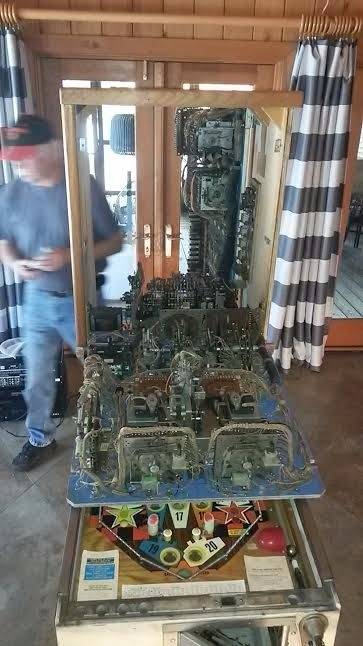 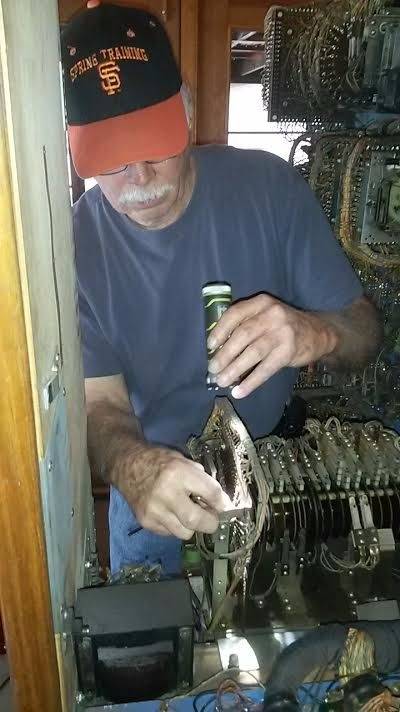 I still have to learn how to play this game. It's more involved than I EVER expected. It's a thinking persons game for sure. It's not a mindless pinball game that only has one out come... lose your last ball and the game's over. This is a game that you can actually win a lot of "MONEY" (credits) if you know how to play it. That's exciting.

Hugh is the absolute best! Welcome to the world of bingo pinball! You said it very aptly: a thinking person's game.