Post #4230 Potential fix for SDTM from scoop. Posted by Reznnate (2 years ago)

You're currently viewing posts by Pinsider yelobird.
Click here to go back to viewing the entire thread.

So where is the reveal / details? This is insane.

All of the trucks are at JJP, Stern, and Spooky at the moment. Lol

LE for sure but let’s see some pics ??
Come on man ? I’m going gray waiting for this , POTC, TBL , moving like pond water.

Ok, POTC is already shipping and TBL is more of a Fictional story at best that doesn't actually have an Ending. Or at least not a Good one!

This game availability delay is getting to be pretty strange...seems like something got forgotten and now CGC is scrambling to recover.
It’s essentially the same game, with a topper &amp; color display.
It has to be some issue with the topper.
I can't see CGC buying parts for a 1000 games without getting some kind of approval from the rights holders. Can't see them stupid enough to go ahead without knowing that the game is approved.
The time delay, being this long, is odd.
Robert

I would Highly doubt they would postpone production and revenue This long for a topper. Heck even Stern ships games a year before topper completion and approval. Plus the topper was nothing special that they would delay all sales. Somebody is taking their time with a licensing signature.

SDTM just posted on FB that Flip N Out is taking orders.

Larry is the Best of the Best.

Already purchased... But it does appear Hemispheres guys are now vendors for CGC... So that means in the future I can buy the other remakes that I want through them.
Just sucks. Cos when I was looking to buy... They weren't listed as vendors. Now I checked and they are...
Which just brings me to the whole stupid market for pinball right now. The whole fake scarcity. I felt rushed. Turns out I didn't need to be that way... But, Iron Maiden LE's got gobbled up fast... I didn't have the money for one... But, I was afraid of missing out on the Monster Bash r LE... And when I saw them being gobbled up in a just a weekend. I acted fast to get one.
Turns out that was stupid of me... But, how am I supposed to know when a game will sell out quickly. And when there will be enough supply.
If they didn't put such scarcity bsl, then I could easily take the time, find the right vendor who is close by. Who will setup my game for me. With a reasonable white glove charge. And who will help support me going forward in the future.
But, no... I bought from an out of state vendor. Who would charge me an additional 300 dollars to just put the box where I want in my house. No removal of trash. no setup. That seems steep for white glove service and I don't consider that white glove.
Plus I had to pay both 300 dollars shipping and a 200 dollar paypal fee.
Okay... I'll pay the paypal fee.. Not a big deal. But, 300 dollars for shipping when he can get it shipped directly to me. Instead of to him and then to me.
That sounds extreme. I'm 45 minutes from the factory.
So... In a nutshell. I'm very excited for this game... Not very pleased with how I am acquiring it... Most of that is on me...
But, if I didn't feel rushed... Again that is how I felt... I would have been able to buy other vendors... And I would be happier...
But, the egg is a bit on my face... But, this to me is the downside of the whole LE BS... One model should would be great.

For $300 I will come to your house and setup your game with any color gloves you like. As for shipping, call Any trucking company and its about the same no matter how close you are to the factory. CGC doesn't have delivery trucks. I will bet your machine is coming straight from the factory same as every machine I ordered from a distributor from Stern or JJP. Only ships from the distributors if the have overage inventory. You made a decision to buy a great game, no sense feeling down about what/who you purchased it from at this point.

Anytime I told you some time ago as you entered this hobby to just reach out. While I won't be your pin mover I was joking about charging you to help setup a game. After doing it a few hundred times its not really a test any longer. As for the Raven... I may help you but must confess its on my least favorite lists of titles sorry. lol

Nothing negative to say as most have blocked you already. JK! I do however have a sincere suggestion. In a post buried some time ago you shared (I think you were being honest) a brief history of your previous life and accomplishments in the pinball industry. Do consider starting a thread entitled "Who is Bublehead to pinball" as I for one am interested in the unknown history and those behind the scenes creative individuals that gave us and new OEM's unique new directions for pinball. Seems like you enjoy writing and I suspect others would be interested to hear some of those details. If you don't like a spot light feel free to PM me as I would love to hear some things you worked on back in the day. Just a consideration, Not a ploy as I know how odd sailors can be. lol My son is a Chief in the Navy (youngest ever awarded the rank, proud dad).

It will still be new to you then.
Open up the box, the smell of new wood and fresh paint excites you. Start setting it up and see the shiny playfield and all the brand new assemblies on it.
Well worth the wait that will be forgotten in an instant when you are setting it up.
LTG : )

However if your on a budget for the holidays you could always go the more casual route for the same effect with NIB LE cologne! lol Sorry selfless plug just seen an opening. www.TheModCouplePinball.com 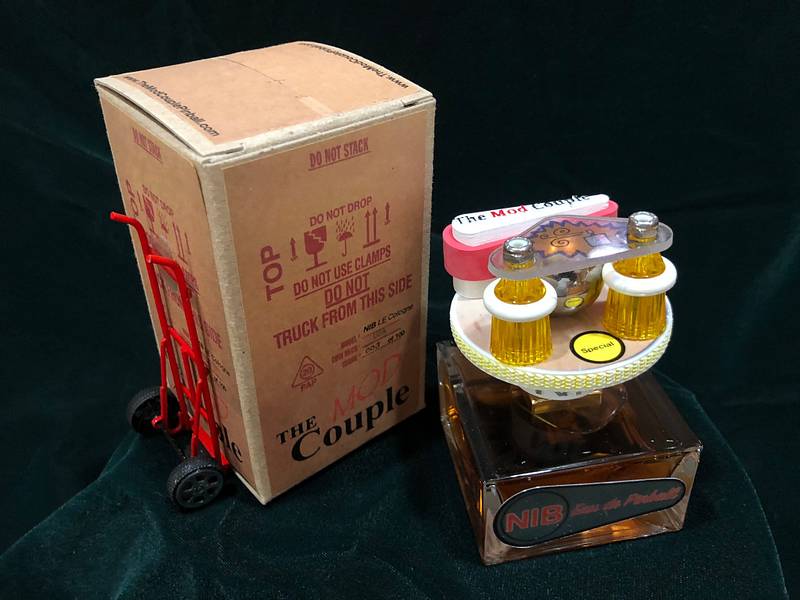 LOL that's awesome. Wife wants to know if it comes in perfume, and what does it smell like (plastic and wax?)

No its is actually a true high end cologne. Yes the presentation is gimmicky but we didn't see anyone else Mod the Player before! Done! Sorry no perfume for the ladies but we never say never....

Yeah I would be chopping at the bit even more if I was a number matcher. Kind of gave up hope for this year getting my game so it is what it is. Had to go out and buy a new game to keep me occupied until mine arrives.

Try to look at the bright side. Your game will be a New 2019 model while the others will have the older 2018 model. Works for cars....

I am part of the club... I got the SE version. Love it! It really is an amazing machine. I upgraded from a Black Rose so the upgrade is startling to say the least! Anyway, dumb question but I want to install black mirror blades on this bad boy, but I just had to double check with the group here that the Bally Williams blades with work with the Remakes???
Sorry if this has been answered before.

Yes, same cabinet as originals. Congrats on a huge upgrade!

A.2.16 on the machine is Special Memory. For the life of me, I absolutely cannot find the Phantom Flip ball save setting on the machine.
Is this something that would normally be addressed in a ROM update? If so, what's the usual delivery time on that vis-a-vis machines in arriving in the wild? Again, my first NIB machine so I am oblivious to whatever the norm for this is.
I also noticed a difference between the manual and the machine when it came to, I believe, A.2.25 Disable Bride vs. ???. I don't have the manual nearby so I can't put down what is in that slot at the moment.

I could be wrong (most times) but as this is a Remake I suspect there wont be many changes or code updates to the code as it has worked pretty well for over 20 years?

Congrats. Larry is The Man and in my opinion one of the Best distributors you will ever find! Love the old house pocket doors by the way. lol Enjoy that awesome machine!

I can confirm that the Bally/Williams blades are NOT compatible. The hole is not big enough and only one notch is needed in the back. I am looking for mirror blades for my SE if any knows where to source please advise.

Just a question to confirm. Are you sure the hole is too small? On B/W games you have to remove the bolt from the cabinet and it goes Through the blade. Just wanting to confirm before ordering some. Thanks

You're currently viewing posts by Pinsider yelobird.
Click here to go back to viewing the entire thread.