Worse than that, they said "Go" and he heard "No." Although it's debatable whether he would've gotten past the catcher parked on the baseline.

While the game last night was fantastic to watch, I felt bad for the lady who caught the Puig Home Run Ball and some jack ass next to her takes the ball from her and tosses it back into the field.
If the jackass who threw it back had caught it himself, then that is his choice to make.
But throwing someone else's caught ball is just a jackass move.
He must have been their friend or relative, because security was not called to the section. I know I would have caused some drama over that if it were me or anyone else in my group who lost a World Series Home Run to a jack ass like that.
If I am ever lucky enough to catch a home run ball at a world series, regardless of which team hit the home run, I'm not handing that ball to anyone else to view or touch until after the game, in my own car.
All in all, this World Series is super entertaining. And while I root for the Astros, I think both teams have played fantastic baseball.
Marcus

It was an in-law who grabbed the ball and threw it back. She apparently said she was pissed because she wanted to throw the ball back herself.

JV on the hill tonight. If he is on, the series is over. Hope he wins a ring! Tigers could not give him one.

Pulling Hill early last time cost us the game. So we do it again?

I hope that's not a shoot ourselves in the foot move.

I’m an Astros fan and I don’t get t either....there were 2 outs...odds were good he would have had the 3rd out.

Pitching duel is over...if the Astros bats get hot and Verlander can go the distance it could be over....3.5 innings left so a lot can happen

Verlander is dealing. If we can't run him soon, we're dead. We're bound to give up another run or two at least. Verlander hasn't even broke a sweat. He could go the distance.

Wow, really?
The Astros' strength was not their bullpen, so what does it matter if they're a little worse? They weren't built around their bullpen anyway. The Dodgers were constructed in a manner that was 100% about getting 5 innings deep with a lead and then letting their bullpen take over while they put up runs on the other team's inferior bullpen. Well what good does that do them now if no matter who has the ball, they're going to struggle for either team? They leveled the pitching advantage, and the Astros already had superior hitters coming in. They took pitching out of the game and turned it into a slugfest. It's really, really, really sketchy to change a variable midway through a season and even worse to do it right at the finish line. Teams can't change who they are at this point.
Did anybody even read the article SI put out? You guys really think that Kenly Jansen went from unhittable to terrible? Darvish had the worst outing of his career and measurements showed that his pitches had dramatically less movement on their breaks. Kershaw is having the lowest swing and miss rate of his entire career on his breaking balls. The pitches aren't breaking, they're staying flat. This affects the Dodgers far more than the Astros.
By the way, curveballs aren't as affected as sliders and cutters because you grip the seams. It's probably why Rich Hill was surprisingly able to hang with Verlander in game 2. But that's a different point.

So game 6 ls over. You still sure the ball makes that much of a difference. I don't as the pitchers seem not too....with respect.

Looks like the Dodgers slept in their own beds, were in there own stadium, in front of their own crowd, and had control of their emotions ..... and therefore the BALL.

So game 6 ls over. You still sure the ball makes that much of a difference. I don't as the pitchers seem not too....with respect.
Looks like the Dodgers slept in their own beds, were in there own stadium, in front of their own crowd, and had control of their emotions ..... and therefore the BALL.

It absolutely is a factor. Hill and Verlander are not as susceptible to the slick ball as others though. Hill throws a curveball and grips the seams. Verlander throws heat, which is a seam grip as well. They both pitched well in game 2 as well.

The players on both teams have already said that the ball affected them. What more do you need?

Really poor decision to let Darvish throw into the second inning. It's obvious that he has no command with that baseball. While it's downright scummy of the MLB to change the baseball for the World Series, you don't have to play into that factor by starting the pitcher most affected by it. Alex Wood should have been on the mound to start the game. Bad management here.

Looked like it effected McCullers more if anything. He hit four batters. The dodgers had a ton of chances early on and let them all fade away.

But to second your opinion Dave Roberts has Way over managed this post season in my opinion.

McCullers was missing wildly too, for sure. But he grips the seams, so he can still get his spin. He might have just been overly amped up and missing the zone, but I have to think the ball played into that too. Darvish proved last game he can't command that ball. He shouldn't have been getting the start over Alex Wood tonight. That's going to be the decision that haunts Roberts and the team all offseason.

I feel bad for Darvish though. He's a fantastic pitcher and of course he's going to believe in himself. But the reality is that he shouldn't have been out there at all.

Amazing run by the Astros. Great story. The only black mark on everything is Gurriel, but I feel like that's hardly anything in comparison to the rest of the good things they've done and accomplished. What a gift to the city of Houston.

I feel bad for Darvish though. He's a fantastic pitcher and of course he's going to believe in himself. But the reality is that he shouldn't have been out there at all.

Maybe he lowered his price tag to sign with the cubs next year. I’d love to have him.

Yep, and Nuthin' as good as a Dodger loss at home in a game 7.

(It really has been a good series)

Maybe he lowered his price tag to sign with the cubs next year. I’d love to have him.

I hope we can keep him, but if they carry this ball forward to next season...maybe not.

Congrats to the Astros!

But to second your opinion Dave Roberts has Way over managed this post season in my opinion.

Could not agree more. In fact I think that both managers were over managing.

Springer was a complete stud in the finals..we haven’t seen a player reach so many bases in a series..Roberts and the dodgers gained exp with all this, they’re real close (obviously) I still wished that someone plunked Gurriel, but Darvish and the staff I guess have a lil class. Overall a great series to watch..congrats to the Astros..just read that Gattis was a janitor 10 years ago- now a World Series champ..that’s a cool story 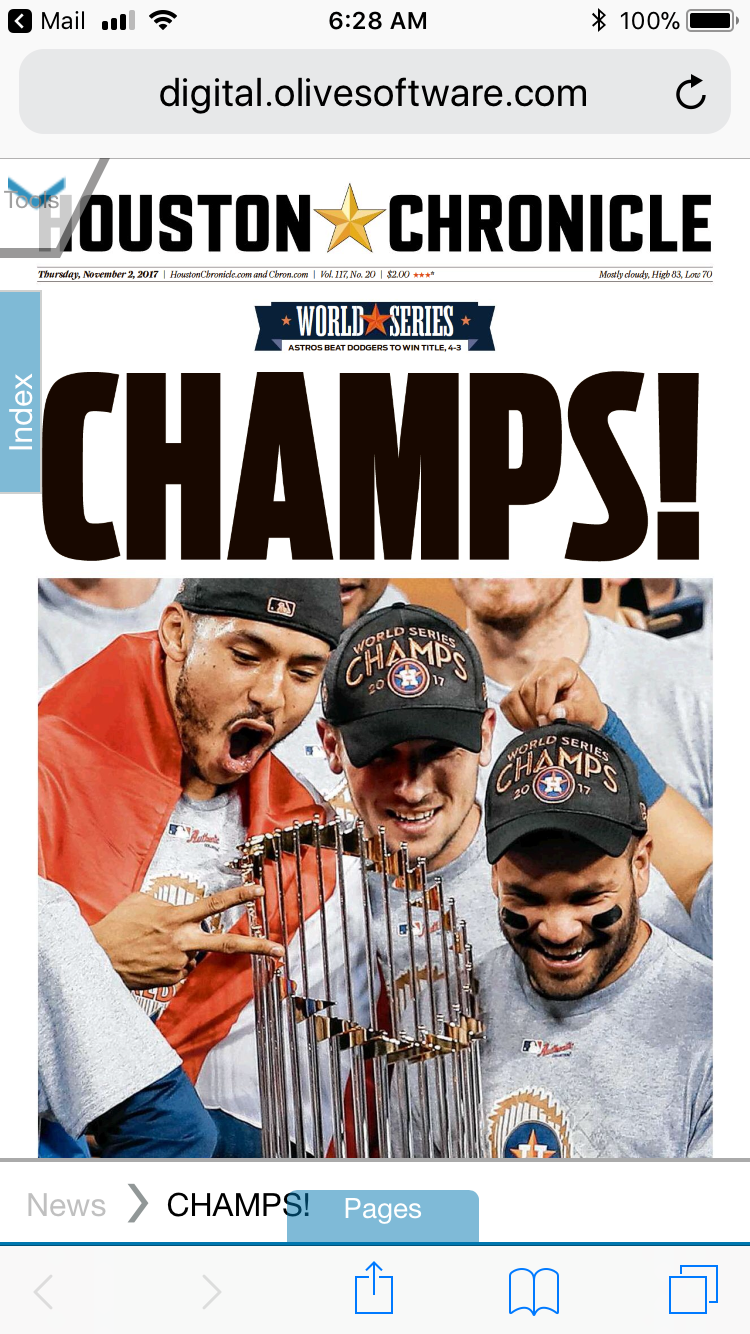