Ive had this Metallica pro for a few years and never updated the code. So a couple days ago went ahead and updated to 1.7, everything went fine. Well, now the game is acting up...for example its awarding primarily grave marker hits at random, as soon as the ball is launched, and when the ball hits various other switches. No rhyme or reason to which switches are setting it off. I pressed down the right orbit switch about fifteen-twenty times, it awarded a grave marker hit twice. Also awarding sparky hits from the wrong switches, and starting sparky multiball. The band member switches are awarding sparky hits and grave markers, and it just started grave multiball while i was standing here with one of the balls out of the game and no ball even in the shooter lane. Basically its freaking the eff out.
This game worked flawlessly ever since I got it until the update. What should I do, reload the update or is something else going on?
Any advice appreciated, thanks in advance.

I'd go into switch test and see if any are stuck closed that should be open, and any vibration sets off.

Also make sure you have the pro code installed, not the premium code.

Did switch test, all good there. Gonna reload the code and make sure its pro code, good call. Will report back.

If not too late : before installing a new code, ALWAYS take a copy (dump) of the current (in use) code, so if needed you can go back.

Unfortunately I was not .....OK, I was being a dumbass and didnt back up the old code. Sure wish I would have!
Reloaded the 1.7 code again and same thing. First game or two is fine. Then just a couple times in the third or fourth game it will give a few unwarranted grave marker or sparky hits.
By the time you start game number 6 or 7 its going off pretty much non stop with sparky/ grave hits, like its an infection that gets worse as time goes on. Not vibration and not switches. It will do it with no ball in play.
Dont know what to do next, I guess Im going to try a different flash drive and load it up again. If I get the same results I guess Im gonna ask around for to see if anyone has a copy of an older update or something. If anyone has had a similar experience, please let me know how you got it resolved. Thanks!

Press and hold the left flipper button when turning on your game, this will force it to do perform a checksum against the code in order to validate that it installed correctly. 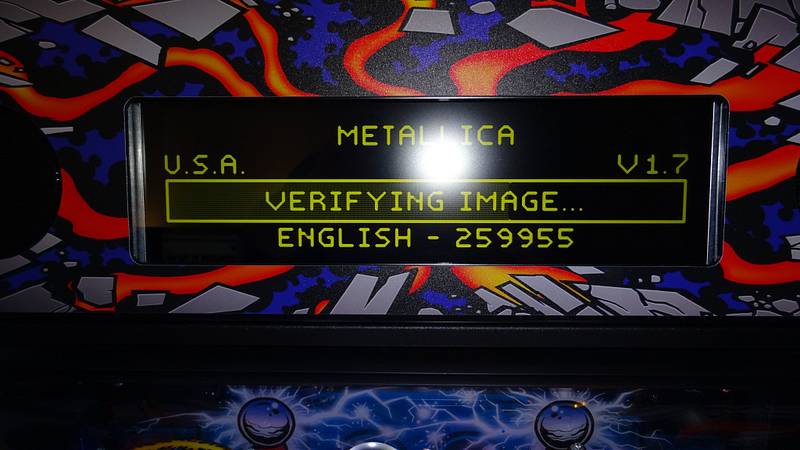 like its an infection that gets worse as time goes on.

Probably warming up and failing. Leave it turned on, and play it until it acts up, and then try the switch test.

Because it worked fine until the code update and went crazy immediately after I updated.
And switch test checks out fine. Seems like the update caused this, dont know why the switches would suddenly go all wack, didnt move the game or fiddle with any switches.

Press and hold the left flipper button when turning on your game, this will force it to do perform a checksum against the code in order to validate that it installed correctly.

Verification successful. About to reload with a different flash drive to see if that helps.

Gents, Im going to go ahead and admit that it looks like the embarassing ending to this story was that dip switch # 7 had been bumped into the on position during the update.
Flipped it back to full off, power cycled and played several games with zero issues.
Keeping my fingers crossed, thanks for the advice, and Happy New Year!

Gents, Im going to go ahead and admit that it looks like the embarassing ending to this story was that dip switch # 7 had been bumped into the on position during the update.
Flipped it back to full off, power cycled and played several games with zero issues.
Keeping my fingers crossed, thanks for the advice, and Happy New Year!

Awesome news that it was an easy fix, thank for updating us!

If nothing else this forum is a place to vent your problem while you think you will never figure out the problem. Just to find out it is a relatively easy fix. I’ve done it many times and it helps to vent. Congratulations on finding the problem

dip switch # 7 had been bumped into the on position during the update.

Very easy to do and just as easy to miss ... glad to hear you found the issue.

Thank you for reporting your issue and fix. This will help others in the future avoid the same issue.

Yes the venting did help. Thanks again all, for the suggestions and advice. I have one other question regarding the update if anyone can assisst.
Now, the shaker motor shakes so hard that it damn near shakes the pictures off the walls! I went from version 1.5 which had a comparatively mellow shake to 1.7. I am assuming along the way they changed the shaker strength in the code.
The difference is immense. I went to adjustments and turned the shaker down to the lowest setting, but I guess that effects the frequency that the shaker comes on, not the strength of the shaker. Now, the shaker is causing me marital strife because it blasts so loud it can be heard everywhere in the house. Is there a setting/ method to quiet it down again? Thanks in advance!