This weekend we set up a new location and one of the games we put in was Metalica pinball.When we were done with the set up I went to the bar and asked a couple if they would like to play a free game of pinball.They were excited and followed me back to the game.As I was putting credits on the game I heard her say"Metalica pinball,my brother is a band member".It took a little while for it to sink and I slowly turned and looked at her. She then said "His name is Kirk,the lead guitarist".After they finished playing we went back to the bar and had some beers.We had great conversation of her life and her brother.As we were talking I googled Kirk Hammett and there she was in pictures with him.This kind of thing doesn't happen to me everyday. 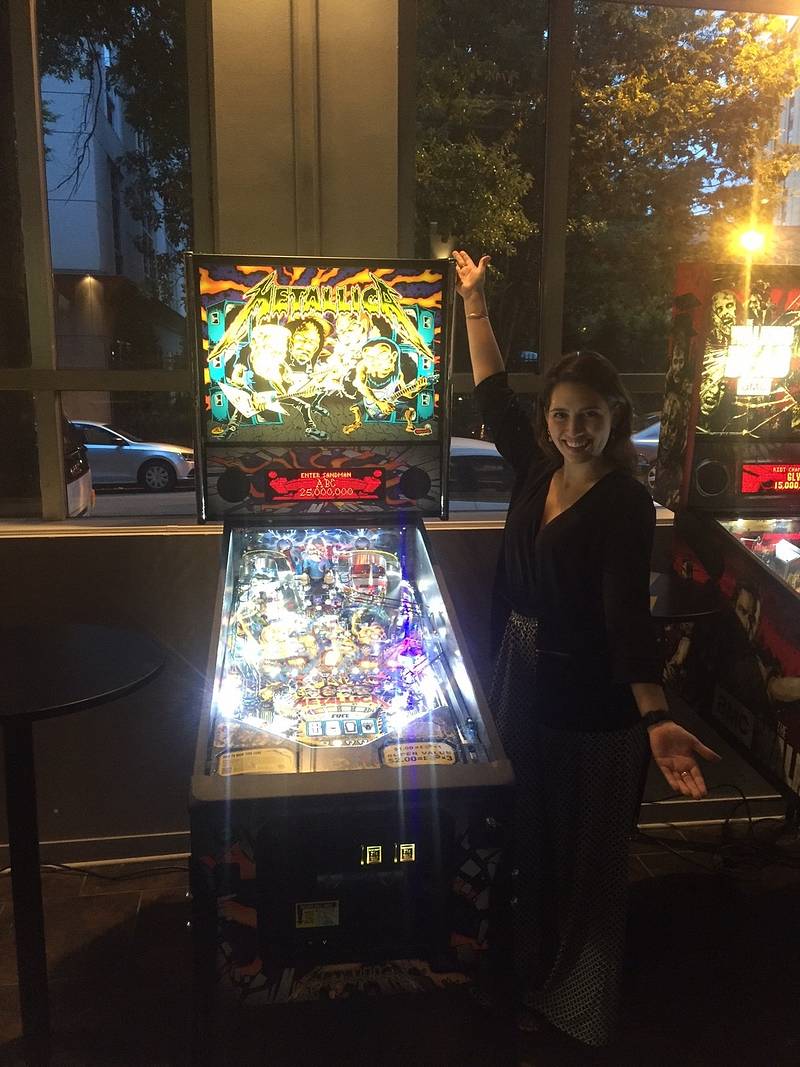 What a crazy cool small world. Very cool experience for sure all created by something so cool as pinball. Thanks for sharing.

Odds are about the same as winning Lotto I would think - cool story!

I'd rather win the lotto

That's awesome! If this is where I think it is, I'm headed down after work today to check it out.

Awesome! Reminds me of the time I walked up to the register to pay at the Saturn Cafe in Santa Cruz. A guy with his kids was waiting to get a table, I looked over at him and it was Robert Trujillo. Standing right next to me! I damn near fainted right on the spot. He was obviously just out for a nice dinner with his family and I didn't want to be a pestery fan, so I didn't say anything, just nodded a bit. My wife and kid had already walked out, I went out and caught up to them. I was in a cold sweat and could hardly talk I was all like "did you SEE that? Did you SEE who I was standing right next to?" They looked at my like I had gone crazy. I said it was the bass player from Metallica!! (Only my favorite band of all time). They said no I'm imaging it. I said really? How many guys look like that, are 6 feet 4 and have a long ponytail and goatee? Did you see him? And I pulled up a picture of him on the phone and my wife was like OMG it was him.

Not pinball related, but Kirk Hammett is popping up everywhere

That was no doubt fate.

and she's way hotter than Kirk

I don't see a ring on her finger. Go for it!

Kirk Hammett does not rule. Sloppy, terrible guitarist. Can't bend a note in tune to say the least............

Sure he can. He's a great guitarist. Not the best, but he ain't no slouch.

Watch "That Metal Show" on youtube when Kirk was on w/Michael Schenker and they jammed together. There was only 1 there jamming and it wasn't Kirk. Terrible guitarist. Doesn't matter now since the band has become everything I hate.

Great... Take a nice story and make it about your shitty opinions...