I would like to be added to your list for the Stranger Things Mods for a Premium with UV kit if that is ok?

Counting the days till the pros start getting built. So excited for this immense addition to the Sth experience!

Are the pros being built after all the premium and LE mods?

Are the pros being built after all the premium and LE mods?

Counting the days till the pros start getting built. So excited for this immense addition to the Sth experience!

I'll be working on the pieces for the Pro model tomorrow.

Marissa is out until next Wednesday, so overall progress will be a bit slower this week (though we just shipped 12 Elvira sets yesterday, which was last week's focus).

The current STh run is Prem/LE, but the following run will go back in order with Pros in the mix.

Ok thanks for clarifying.

Do you ship to germany? Would be great!
Please add me to your list for my pro with uv kit

I would love to be added for a Premium with UV kit.

Great to see the production on its way

Great to see the production on its way can’t wait

Back into full swing as of yesterday.

Eventually I'll post an update with a timeline prediction, but I likely won't have a clear idea until sometime in Oct. (once I can time a couple runs without Elvira sets in the mix, and by then I'll also have more help [have recently been rearranging the house, stacking printers, etc. to make it more practical for 3+ of us]).

Those that will ship from the current run will be messaged this weekend.

Hello,
Do you ship to germany? Would be great!
Please add me to your list for my pro with uv kit
Greetings

I ship to Germany, and anywhere that doesn't have a restriction.

Those with * will ship soon. Currently holding 4 sets back toward a distributor allotment of 5 that was promised early on.

The upcoming run will be 100% Pro versions.

The weed is excellent in kanahookah

Such an accomplishment selling so many. Just amazing (and well deserved!!).

Pretty sure he already said that it’s just the difference of a screw for mounting hardware.

At a glance, from player perspective, they'll look nearly identical.

Pro won't fit a Prem/LE, as it has the Power Box finished on the left side, where the metal opto cover finishes the look on the Prem/LE.

Prem/LE is also stabilized on the left by the opto assembly plastic. On the Pro, it's stabilized from underneath the middle platform.

Will update with photos when I can.

Pretty sure he already said that it’s just the difference of a screw for mounting hardware.

That's in regard to the UV kit.

Oh, Ok….so it’s not just a difference of a mounting screw. I was pretty sure you said that it would have to be slightly modified for the pro version. Thanks Medisinyl for the update. Looking forward to having this on my machine.

Awesome!! Thanks for clearing that up! Can’t wait to get mine!!!

Medisinyl
So in your list are Pro versions B?
19) DonBrendano (B)
I seem to be 5th of the B's and getting excited!!!!
Brendan

You'll be in the next shipment.

Going to be attempting to complete all of the Elvira sets this month if possible (got a bit more added on the final call than I hoped), while still making progress here as I can. Will be a bit more manageable once 100% focus is on STh.

Put me on the list for a set for a premium with uv installed
Let me know what I need to do next. Thanks.

I just want to tell you all what I already PM'ed

Medisinyl. The best mods are the ones that look like they came with the game, and these are among the best I've ever seen. And although I had to sell my youngest child to science to pay for it (my house is noticibly quieter now!), it was more than worth it and you'll be VERY happy even after the wait and the cost.

These are the Pro back walls (before wiring and final platform assembly).

Difference is the power box is filled out compared to the Prem/LE that is finished off in appearance by the factory metal opto shield. 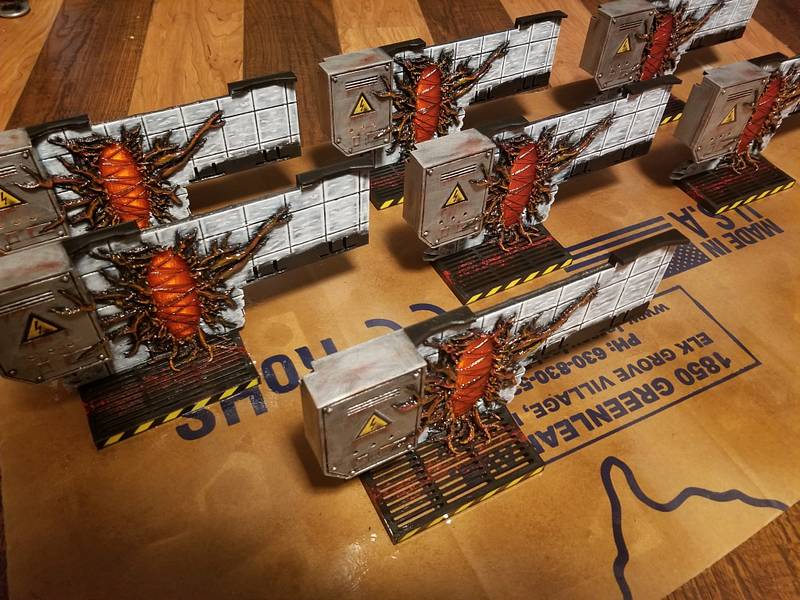 Spot 42 here checking in and to say these kits look sick from what I’ve seen!! Can’t wait!

As most recent effort has been directed toward closing out Elvira asap, we're on pace to have all of the remaining Elvira sets finished this week, ahead of the projection.

Will be 100% on Stranger Things starting next week.

After the current STh run, the following two runs should give a fair idea on timeline estimates (perhaps adding another on board for part time help in Oct. if works out for them).