Anyone within a day's drive of Dallas with a Magic City that needs a better playfield?

I have one here in fantastic shape... but am re-theming it. I'd hate to sand down such a beautiful playfield and since I'm not going to make it to TPF with this pin project, I can wait a little bit for someone to come over, plunk down some cash or labor (still have to clean and re-lube all the scoring assemblies in the head) and swap out their playfield for this one.

That is such a beautiful playfield, please try to hold off. Someone out there will want it. I would use it for my magic city but my playfield is in pretty good shape.

That is such a beautiful playfield, please try to hold off. Someone out there will want it. I would use it for my magic city but my playfield is in pretty good shape.

That's what I'm trying to do... but evidently, some Sheila from Down Under doesn't like my post of trying to save a damn playfield. A couple of locals have been searching since last September but have found nothing to swap out with me. Pinside is a last ditch effort to save a beauty and get me an ugly playfield before I re-theme it. I'm keeping the same layout but sanding it down and doing all new graphics, including new graphics on the playfield plastics and backglass.

When I got this cab the legs were disgusting and full of rust scale and dirt daubers. The cabinet was sanded by someone with a big belt sander and had gouges in it and the backglass had a big crack through it. The playfield plastics were orangy-brown and no longer transparent. The playfield posts were all crackled but the playfield paint and the pop bumpers were in really great shape.

Really, the playfield and pop bumpers were the only things left that looked good. I'm reusing the pop bumpers, everything else is being redone, and if I can salvage the playfield to help someone restore theirs then that would be a good thing.

I'll be moving forward with the work after the Texas Pinball Festival.

I already have the playfield graphics mostly done and have the 44" plotter to print them with. The 4 bar chime box I'm adding to the 2 bells that came with it are all tested and working with an Arduino Pro Mini and an 8 relay board. Next up is to get all the Neopixels working with the Arduino AT MEGA that will be running the playfield. It will talk to the Arduino in the head and the chimebox/knocker controller Arduino Pro Mini using serial communications. I already have most of the ruleset worked out in my head.

How is this project going? I just purchased one myself and am planning to do the same! What's your theme? 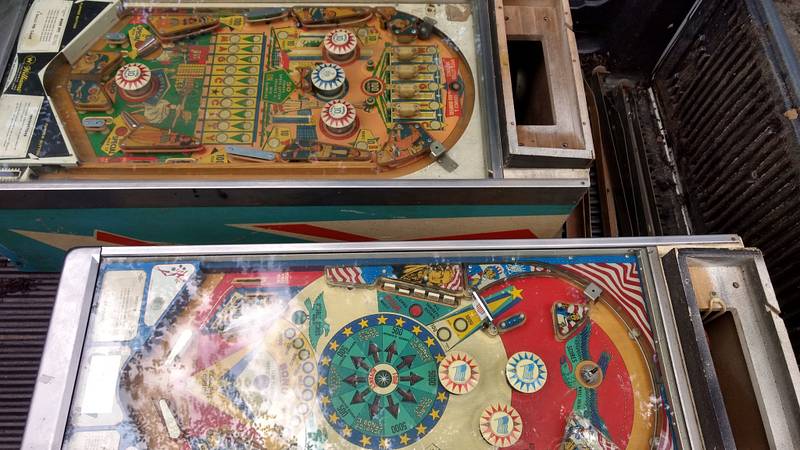