I am having two small issues with my LW3 pin. There is a DMD issue where the bottom two segments that run horizontally are out. If you shake the DMD or bump the game they flash on and off. If you even just barely(and I mean barely) touch plexiglass that covers the DMD on the front, the segments appear or disappear. I took the DMD out and reflowed solder to the logic board that is attached to the DMD. Tried reseatting roms ect, however nothing worked. The issue is still there. Does anyone have any idea what could be causing this? Is the DMD failing? I didn't actually take the DMD out and from what I understand there is not much you can do to solder one if there is a loose solder joint on the actual DMD itself.

The 2nd issue I have is every once and awhile when starting multi ball, the trough will kick out a ball into the outlane and the ball will move upwards in the outlane from the velocity of the kick out. It then rolls down back towards the coil to be fired however alot of time the shooter coil fires before the ball rolls back down completely which results in the ball not getting enough contact with the shooter coil to make it out of the outlane. The 2nd ball is then ejected into the outlane so there is now too balls out there in which the kicker coil fires both into the playfield. Is there anyway to prevent that 2nd ball from getting kicked out and slightly up into the outlane? I can try to get a video of it happening, but it is not every time, just every once and awhile.

Thanks for any help you can give me.

I would assume your DMD issue is just the DMD itself. If you can, borrow one from a friend to test out. Shouldn't do any harm.

For your shooter issue. I'd check the switch in the shooter lane in switch test(with a ball) to make sure it is activating as it should. If it does, I'd check the metal guide etc where the ball kicks out and see if you can adjust(bend) it to help reduce that bounce/spin. I've also used target backing foam, or weather stripping foam to deaden ball movement in various places. Perhaps you could strategically use that here to slow down the ball exit.

My LW3 does something similar with the coil firing before the ball touches the switch. Basically for some reason DE made it so the coil fired before the ball hit the switch, I am assuming to get the ball in play faster. It happens every once in a while with mine where two balls will be in the shooter lane. I don’t find it to be a huge deal as it can still fire both balls at the same time with no issue.

DMD - you may need to look into the "rear window defroster paint" method. I did this on my Lethal Weapon, and it worked pretty well. Search here on Pinside if you're not familiar with it.

Trough - I don't have my Lethal Weapon handy, but is there a simply adjustment to the metal where the ball comes out of the trough that can keep it from going so far up the shooter lane? I had a kind of similar issue on my Getaway recently, and I just bent that piece of metal and all was good.

DMD - you may need to look into the "rear window defroster paint" method. I did this on my Lethal Weapon, and it worked pretty well. Search here on Pinside if you're not familiar with it.
Trough - I don't have my Lethal Weapon handy, but is there a simply adjustment to the metal where the ball comes out of the trough that can keep it from going so far up the shooter lane? I had a kind of similar issue on my Getaway recently, and I just bent that piece of metal and all was good.
Jeff

Rear window defroster paint method....Sounds interesting, I will have to check that out. I pretty sure it is something loose on the DMD as when you barely bump it, it lights up or goes out.

I am not sure, I will take a look at the metal when I get home. Thanks

Just looked at it and I noticed the switch arm in the trough is broken. Not sure if that is why it is happening but I ordered a new switch, see if that fixes it. I normally wouldnt mind but sometimes it tries to eject both balls at once and only one will actually eject leaving one still in the shooter lane. I guess because my switch is broken, the ball just sits there till it goes into ball search mode. 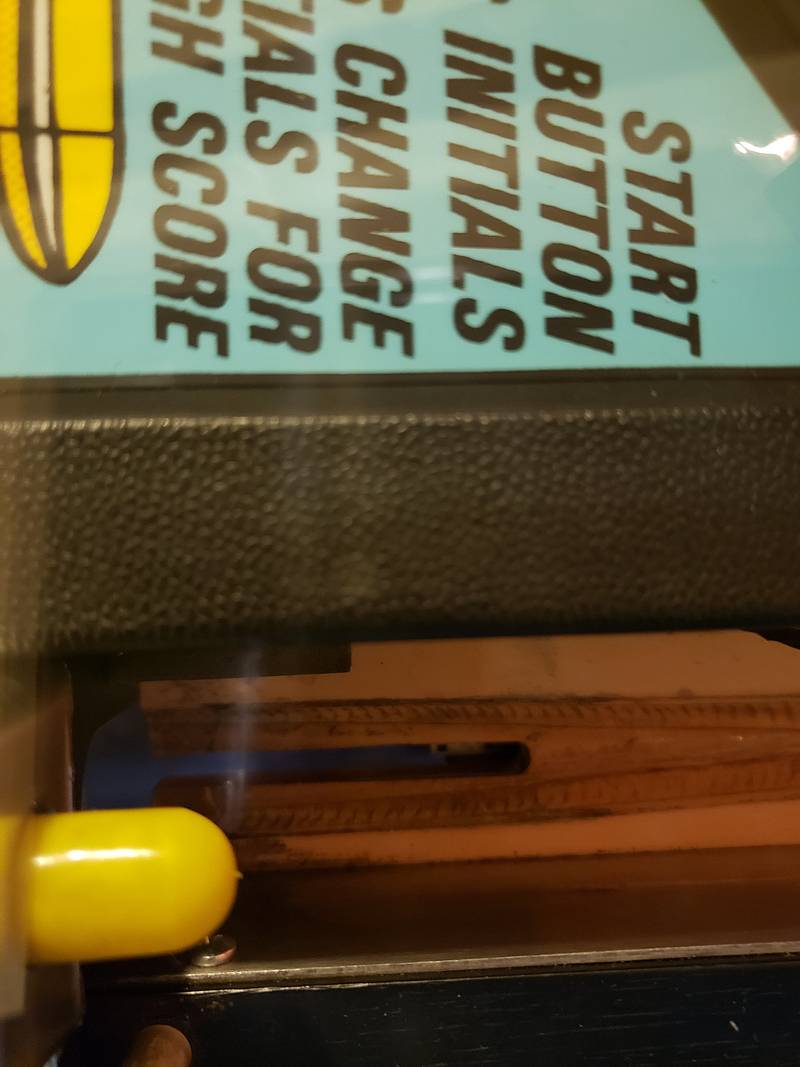 Coin door switch does not disable high voltage on this game.

Are you talking about the plunger just during multiball? That might be timed. If you don't have a shooter lane switch what happens when you drop the ball into the shooter lane during play? It should auto launch.

Either way, fix the switch and hopefully it'll clear things up.

Ok, I have no update with the DMD yet, I did pull it out and test it by putting/removing pressure on the where the pins go in between the DMD glass. This gets one segment back but not another. I don't see any broken or loose contacts. Looks like I would have to grind down the glass/plastic or whatever it is to access the solder pads in order to try and repair them. I am afraid of doing something that will make the DMD even worse so for the time being, I am just gonna let it the way it is any maybe try and find a color DMD somewhere for it. I would rather have a couple lines out that is really only noticeable when looking to see what ball I am on then to try and open it and make it worse or stop working all together.

I did notice the ball trough switch that senses when there is a ball in the outlane was broken. I ordered another switch which has a wire like this on it. https://www.marcospecialties.com/pinball-parts/95-4164-00

After playing several games I noticed a couple things, the ball would not plunge very hard sometimes onto the field (wouldn't hit any of the bullet targets) and 2nd, if I did the highway shot where the ball would loop around the top of the game and it comes down to the flipper. If I held either side of the flippers up in order to try and catch the ball, if the ball hit them at any decent speed, the flipper would be knocked back down causing the ball to drain. It mostly happened with the left flipper, but the right flipper did it once or twice.

So I looked for an EOS switch by the flipper thinking maybe it needed cleaned, didn't see anything other then the coil. I searched this forum and did find that there should be one that notes when the flipper is moved down slightly and temporarily applies high power to the fliper to hold the ball. I looked at the flipper control board and noticed the two upper fuses that are closest to the playfield had broken fuse clamps. They were barely holding the fuses in. I had some spare replacements from when I had my Baywatch, so I replaced them and soldered them in. Then I noticed as I was putting the fuses back in, the F-3 fuse was blown. I replaced that, played a bunch of games and so far it has not blown, not sure if the loose fuses above it caused it or what. Also the ball has yet to knock either of the flippers down so I am not sure if those couple issues were causing it or not as it hasn't done it yet. Can't find what the F-3 fuse does in the schematic, it only seems to list the wires and what they are for and not the fuses.

Now for the ball plunging issue, I noticed that the switch that I replaced in the trough was bent up more and was actually holding the ball from getting all the way down to the plunger coil. I noticed that when the coil fires the ball out the trough, it is hitting the switch metal wire that the ball sits on and was bending it forward. I also noticed the coil bracket was loose and only had one out of 3 screws holding it in. I found another screw in the bottom of the cabinet and added it and tightened both. I bent the wire that goes to the ball trough switch down to try and make it clear the shooter coil, however if I bend it too far down, the ball won't activate it. If its too far up the plunger hits it, bending it forward. Any ideas what I should do? Did I get the wrong switch? It has a metal wire on that looks like this with the angle obviously going up through the slot in the playfield https://www.marcospecialties.com/pinball-parts/95-4164-00

Wrong switch. You need one that bends back down under the playfield so it doesn't come up far enough to get hit by the plunger.

As you discovered, no EOS switches in this era of Data East. The 4 fuses on the flipper board are in pairs for left and right. One is for the inital flip 50v power and one is for the hold power (7v i think?) I imagine your hold fuses were loose or blown. Sounds like you solved that one.

Wrong switch. You need one that bends back down under the playfield so it doesn't come up far enough to get hit by the plunger.
https://www.pinballlife.com/data-eastsegastern-shooter-switch.html
As you discovered, no EOS switches in this era of Data East. The 4 fuses on the flipper board are in pairs for left and right. One is for the inital flip 50v power and one is for the hold power (7v i think?) I imagine your hold fuses were loose or blown. Sounds like you solved that one.

Are you absolutely positive this is the right switch? According to my manual it says : shooterlane 180-5053-00. Plus I found this thread. https://pinside.com/pinball/forum/topic/part-number-for-a-shooter-lane-rollover-switch-lw3

Can anyone do me a solid and take a picture of there shooter lane switch on their LW3?