So it works fine in test, open and closing, switches registering fine. In attract mode Balrog swings to cover the ring shot (as it's supposed to), when you start the game he swings to the side, so far, so good, right?

If I trigger any switch on column 3, 5 or 6 during a game balrog starts moving. It's almost as if there's a switch short somewhere, but I'll be b*ggered if I can find it.

The thing that really confuses me is that if I close the same switches in balrog test or attract mode, it doesn't move. It's only during gameplay. So it can't be a shorted switch, otherwise it would do it in test as well, right?

I noticed that it's running V5.0 which is what it left the factory with. I'm going to update it at some point but I scanned the changelog and didn't see anything pertinent to Balrog.

Disconnected all looms apart from switch and motor driver. Even tried disconnecting as many switches as possible and still the same
Reflowed the motor relay board. Again, it works absolutely fine in test/attract, it's only during gameplay.
Checked the board for battery damage, looks all good to me.

Things I've yet to try:

Different CPU board. It's a bit tricky as I believe only Monopoly and LOTR use this particular board. At this moment in time I'm pretty sure that's where the fault is.

Any suggestions? As I've just spent $500+ to get all the Balrog bits that were missing and it's quite annoying that it's still not working properly.

That was my first thought, but then why does it work fine in test, even when I'm triggering the other switches?

For what your describing I would start really small and work my way up. I wouldn't assume off the bat that something in the backbox is causing this issue ... But that's just me and my level of experience.

I would pull the manual out and start checking the switches like LTG suggests, maybe something isn't wired right.

I've spent a good couple of hours looking at all the switches, checking for shorted out diodes etc. Normally, I'd just find the column/row that matches and check all of them, but on this it's multiple rows/columns so I'm thinking it's more likely to be the CPU at fault.

At the very least I think I've found the reason why the last owner removed the Balrog mech, hopefully I'll lay my hands on a loaner CPU board early next week to rule that out.

EDIT: One thing I'm considering is whipping up my own loom that just has the balrog motor, getting it into a game and manually triggering some switches with a diode to see if it really is a CPU or loom fault

You need to test the switches in columns 3, 5 and 6 in switch edges test. Watch the display and make sure each switch registers properly and no single switch registers more than one switch in test. If all test good, put a ball in the saucer and test them again.

If it has the original harness for the switch and flasher, check the bends closely for fraying wires.

Checked in test, all switches work as they should, nothing triggering when it's not supposed to. Not sure what saucer you are referring to.

Here's the thing, even with balrog removed entirely, I can still hear it triggering the motor relay when I close switches in game. Bizarre. So at least it's not the balrog wiring

Gimli saucer. Only saucer in the game. Sometimes a second switch needs to be closed to see a switch matrix issue.

Please specify which test you're running while testing. Seems like you've only specifically mentioned the balrog test so far.

Gimli saucer. Only saucer in the game. Sometimes a second switch needs to be closed to see a switch matrix issue.
Please specify which test you're running while testing. Seems like you've only specifically mentioned the balrog test so far.

Shire and two tower switches are like the Gimli switch.

Ok, so I think I've zeroed in on it. TL;DR is that the microswitches on Balrog were too 'tight'. This meant the following happened:

Both switches closed, motor turning
One switch opens, motor starts to stop
Because the switch was up against the cam too tight and that there's inertia in the cam, it would carry on until it was closed again
Both switches closed, even though the cam had reached the stop position.

Now obviously the Balrog test uses slightly different (and more forgiving) code than the main game does. I can only guess why it was being triggered by random switches, maybe those particular ones were related to an interrupt which would cause the Balrog code to wake up and go 'Hmm, both switches are closed, that's not right, lets spin the motor until one opens'.

In any case, my problems are directly related to the fact that I've had to 3D print a replacement for the motor mounting bracket that seems to be complete unobtanium at the moment:

If anyone has one laying around, could they take a picture from the top down with a ruler in the shot? Where the microswitches go is pretty critical for it to operate correctly. 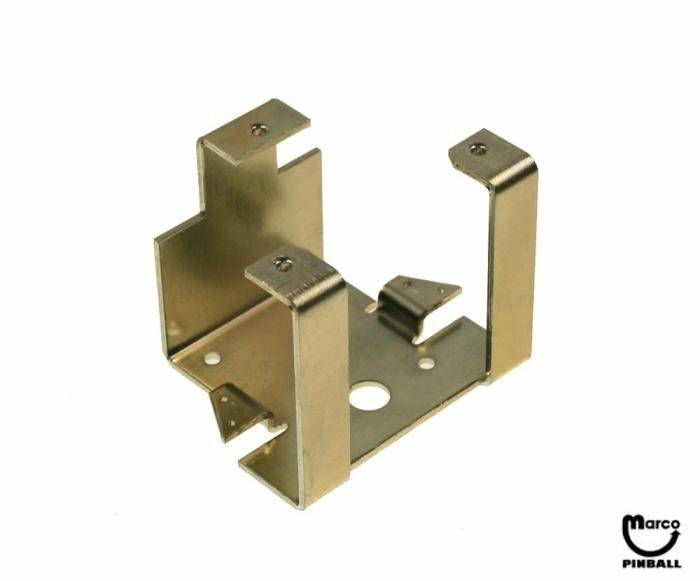 After many prints and adjustments I finally got it working, I've uploaded the model to Thingiverse just in case anyone finds themself in the same boat I was (as unlikely as that may be):

After many prints and adjustments I finally got it working, I've uploaded the model to Thingiverse just in case anyone finds themself in the same boat I was (as unlikely as that may be):
https://www.thingiverse.com/thing:4974874

I don't need it but I still think that you making this file available is really nice of you, this is exactly what we need on pinside: people helping other people.

I'm not going to lie, it did take about a week of working on it to get it all dialled in properly, it would have been so much quicker if I had access to an original piece. It's still not 'perfect' but it's good enough for now for me to play it and see where the weaknesses are. If/when part of it snaps I'll just reinforce that area and reprint it.

I put it up on Thingiverse for two reasons really:

1. If I made them to order, I'd probably sell about two. It's pretty rare for that piece to be missing entirely.

2. I've already downloaded a few models to help fix pinballs with from Thingiverse, so this felt like my way of saying 'thank you'

3D printed parts and pinball can work, you just have to factor in the brittleness of the plastic.