THERE ARE NO LISTS. PLEASE DON'T ASK TO BE PUT ON ONE.

Current Status: 9/19/2018: Work has begun on creating a 3D printed t-rex so that I can scale up production and offer them to those who haven't been able to get one yet. I don't have an ETA.

Price is $400 shipped (in the US only). I am currently only shipping within the US. Payment by mailed check or money order is preferred.

Additional information not covered in the video at this time:
1. If you order the new Jaw from Marco Specialties, towards the front, behind the two tabs, you may need to bend the front edges of the sides out to keep the ball from getting stuck in the jaw when the t-rex picks it up.
2. Make sure the back of the t-rex is not making contact with the dino collar (the U-shaped peice behind the t-rex). That piece is held on by 3 screws that are accessible when the t-rex is bent down. You may need to adjust the position or bend the tabs a little to get the collar moved back. Some have even notched the holes to get it to move back. I'm sorry if you run into this issue. It was something I had accommodated for in the final sculpture to work on my machine, but likely due to some variation in the playfields, still seems to be an issue for some people.

Post showing an impact test with a hammer:
https://pinside.com/pinball/forum/topic/jurassic-park-improved-t-rex-work-in-progress/page/23#post-2540776

10/25 Update: 4 finished t-rexes are available. PM your email address to me if interested. Please also read over this post.

10/12 Update: The interest list is being eliminated in favor of selling on a first-come first-served basis as batches become available. While I am phasing out the interest list, I have been in touch with those who are still on the list and had claim to a t-rex in Run 1.

6/5 Update: I have reached out to the first 15 people on the wait list to confirm they are still interested and gave an ETA on when I think theirs will be ready for shipping.

5/29 Update: The new molds were successfully made and the first production run has begun.

5/23 Update: The pilot period is over. Changes were incorporated into the sculpture and new molds are being made.

2/18 Update: New video of the latest version with several successful pickups in a row. It's still a prototype at this point. It will be on display at the Louisville Arcade Expo in March for further testing before finalizing.

1/16 Update: A couple of prototype versions have been sent to members of the pilot group for testing before the final version will be produced. 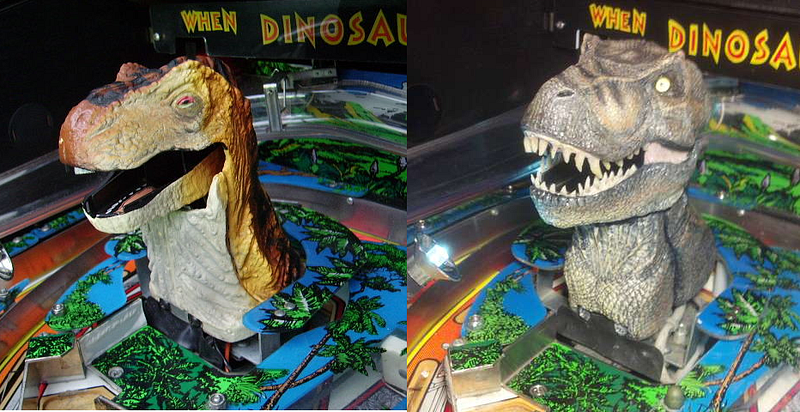 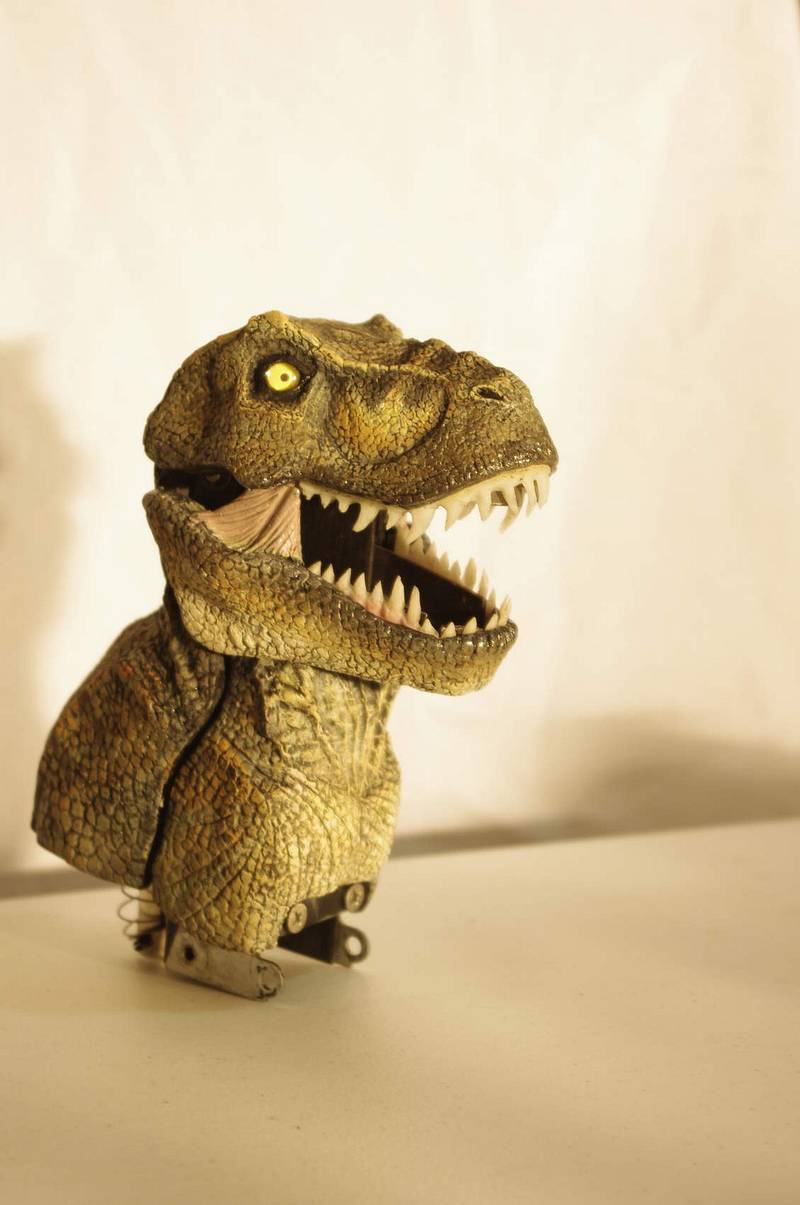 In an effort to improve the look of the T-REX in my JP, I've come up with the idea of making an improved skin out of silicone that will stretch over the original.

The first task was to make a cast of the original. Then I need to build what the new skin will look like, make a mold of it, and cast it in silicone and see if it works.

The idea is that the replacement skin will just fit1 over the existing T-REX, requiring no changes to it.

Attached is a pic of an initial mock-up to see if a better T-REX can even be sculpted on top of the old. I think it can, but the original doesn't provide an easy platform for doing this with its squat and wide nose. I'm extending the nose out a bit, and hope this won't cause issues with picking up the ball. It will be a soft material, so if it gets pushed into the playfield when picking up, it will hopefully at least compress enough to allow the ball to be picked up normally. 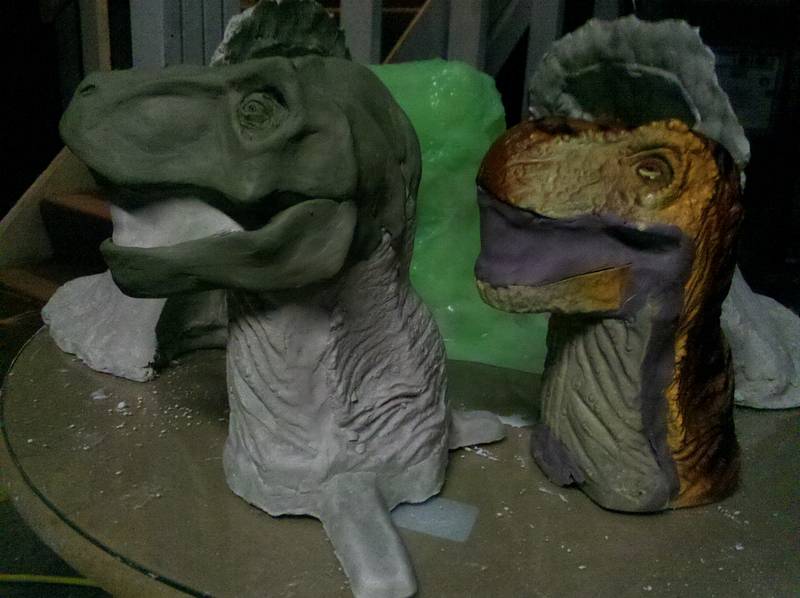 Nice!!! T-Rex could certainly use an upgrade. I'll be following this thread.

Agreed!!! I've been re-discovering my JP more and more lately

Nice!!! T-Rex could certainly use an upgrade. I'll be following this thread.
Exciting times in store for JP owners with this also in the works:
http://pinside.com/pinball/forum/topic/jurassic-park-rules

I am continually blown away at the creativity and talent pinsiders have.

Mmm...appears my JP might be receiving yet another mod in the future...

A minor update. Still working on getting the overall shape of the head. I want it to read T-REX more than the original, but also look as much like the movie version as possible. The profile can be made to look ok, but the front view is going to be a challenge, because the bottom jaw needs to be much narrower even than the original T-REX that's underneath, so that's not going to happen... I'm hoping it will still look good from the front.

So far I'm mostly just working on the side that is shown in the photo, so I'll post different angles when I get further along. 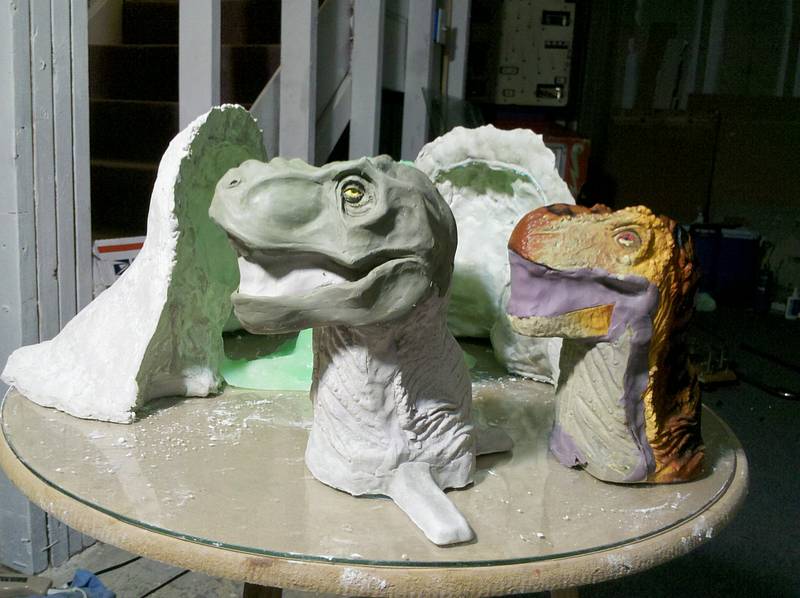 Do you think it's possible to add teeth?

Do you think it's possible to add teeth?

Yeah, I'll be adding teeth for sure! I don't think they'll be an issue. It will all be made out of silicone, so the ball should just be able to push through the teeth when eaten.

Wow! I do not own a JP any more but this would be a must have mod if I did. Like your avatar by the way. Almost finished the first book.

This looks interesting. The idea of a mechanical dinosaur was genius by Data East, but executed poorly in design appearance. I always thought it look like a goofy Brontosaurus , and not a vicious T-REX

Thanks to all for the compliments so far.

A few more pics of progress. I've roughed out the other side of the head and I'm working to balance out both sides. Any details seen at this stage are just for reference as I'll end up changing the overall shape until it's just right, then details will be added in.

I'm encouraged that the front view looks enough like a T-REX to keep going with this project. 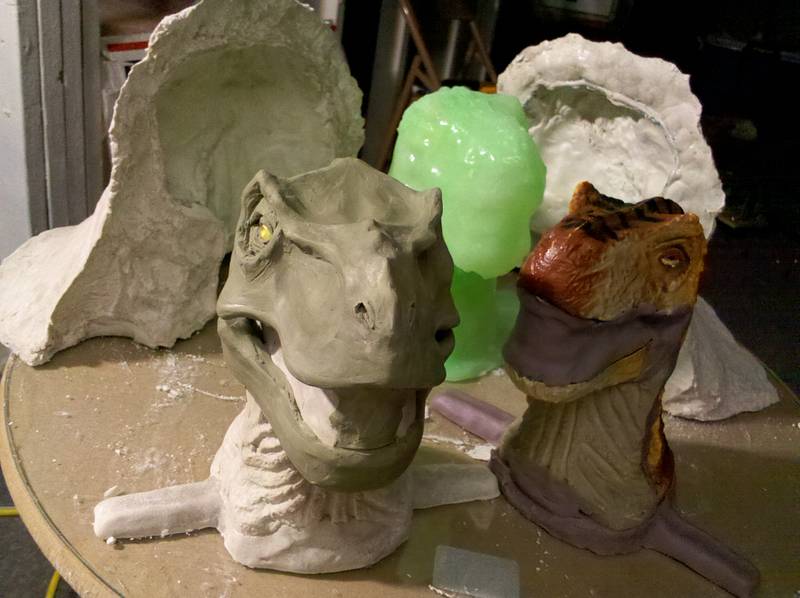 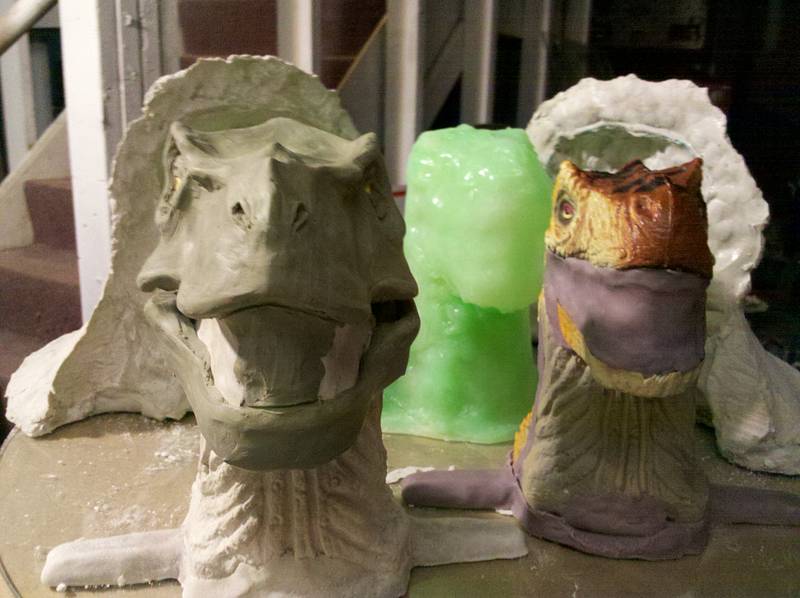 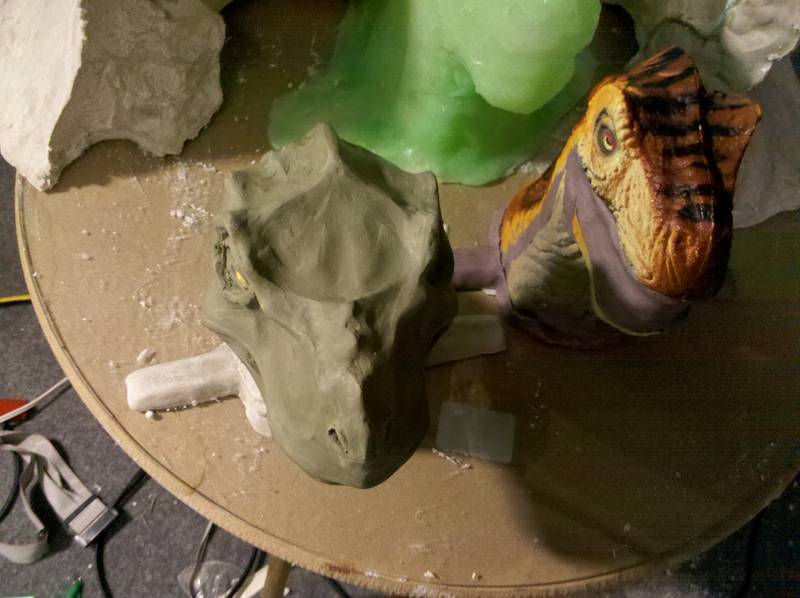 Much nicer than the rubbers I put on my head!

Now we just need a new dinosaur for the lwjp egg

Sweet!
Now we just need a new dinosaur for the lwjp egg

If I ever get one, I'll get right to work on that!

Next T-Rex improvement is to get the damn mechanism to work reliably.... Great work there, I love working in 3d with moulds and clay, that was my favorite medium in art school.

I'm hoping I get to work on it more tonight.

I'm experimenting with scales. Not sure yet if this is the way I'll end up doing them. 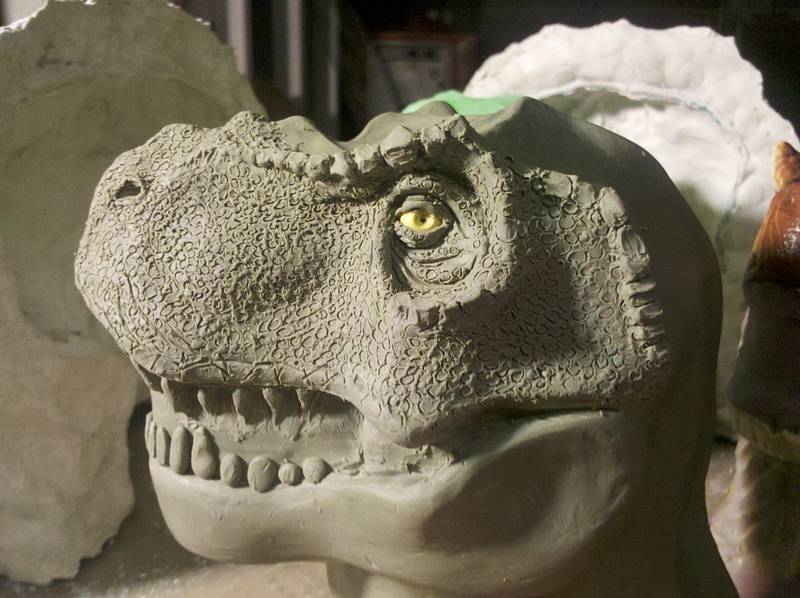 Simply wicked work! Keep it up!!

I'm working out a method for scales that I like a lot better. You'll see them particularly in the center of the picture. 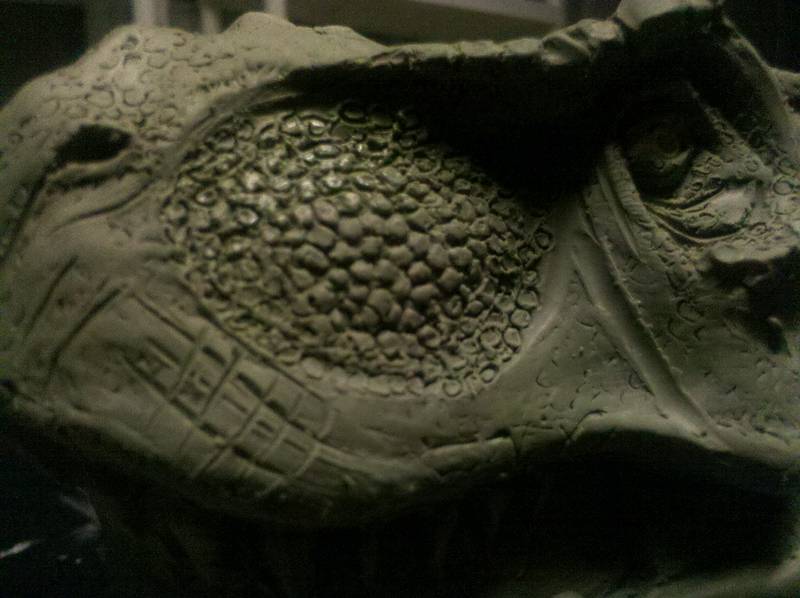 Looking good dibs on first one you sell please

Very nice! Hope you proceed to produce these, I'd like to upgrade mine to something a little more scary!!

Looking good dibs on first one you sell please

Very nice! Hope you proceed to produce these, I'd like to upgrade mine to something a little more scary!!

Let me get further into it before I make any promises. I like the idea of making extras to sell, but I have no idea at this point if it's even going to work out or if the process to make extras takes way more time than I'd be able to recoup in sales.

Very Cool I'm excited to see how this turns out

Mods for your pinballs

nice, can't wait to see what the final result will be.

if it ends up working properly you could always sell the molds......someone will reproduce these I'm sure.

Looks fantastic! I would also like to purchase the mod if you elect to sell it (thus put me down for one).

Finished up some more scales. It's going to take a bit to fill it out, and I'm thinking I might try a less detailed mock-up, make a mold of it and see if the overall idea works before finishing this one. If it doesn't work, I'll have to change my approach, which will likely require a different sculpture. 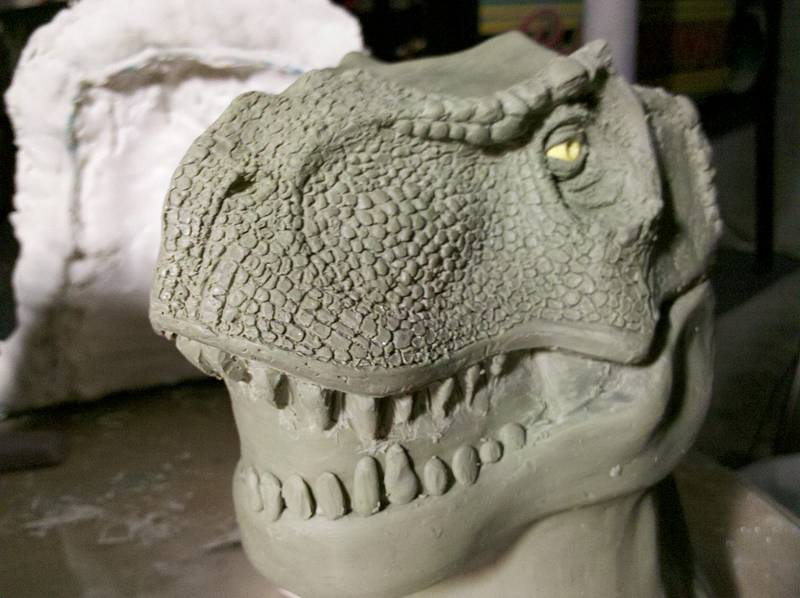 Man, this just makes me want a JP that much more.

The silicone won't work in the game tho. Looks great, but there is no way he'll be able to pick up the ball anymore. the nose extends too far out. Visually it looks great but just won't work.

The silicone won't work in the game tho. Looks great, but there is no way he'll be able to pick up the ball anymore. the nose extends too far out. Visually it looks great but just won't work.

I did mention this in my original post and hope to accommodate for it. I'm aware it is extending out more, but if solid silicone won't work, it doesn't have to be solid out in front of the nose. It can be hollow and would compress when the T-REX eats the ball. We'll see.

But Grandpa said all the dinosaurs were girls...

But Grandpa said all the dinosaurs were girls...

I'm thinking I might try a less detailed mock-up, make a mold of it and see if the overall idea works before finishing this one.

That sounds like a very wise move, no point in trying to nail the details when you might have to rethink some basic approaches after real world testing.